Some of the first data to delineate the value of assessment of inherited genetic changes in prostate cancer came from Pritchard and colleagues who assessed the prevalence of mutations in 20 DNA-repair genes among 692 patients with metastatic prostate cancer8. They identified such mutations in 82 men (11.8%).

More recently, Nicolosi and colleagues published data in JAMA Oncology assessing the prevalence of germline mutations in a diverse cohort of 3607 men with prostate cancer at various stages of the disease trajectory10. All included patients had germline genetic testing which may enrich the population for mutations. The authors identified germline variants in 620 patients (17.2%), of which BRCA1/2 comprised only a small proportion. The 10 most commonly identified variants are as follows: 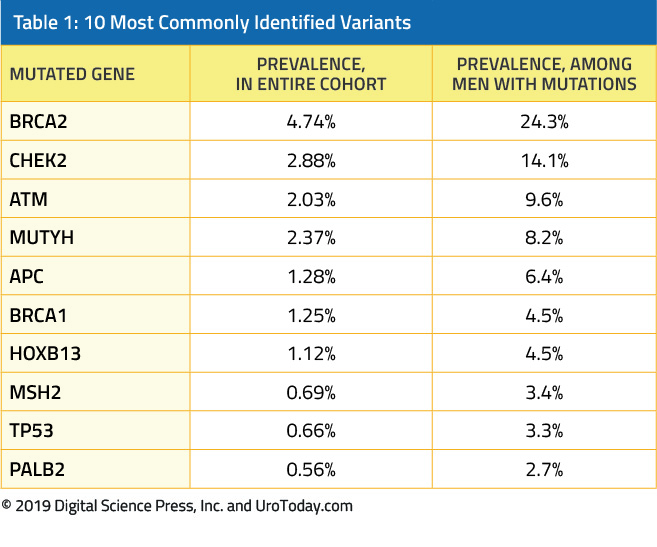 Among a cohort of patients with metastatic castrate-resistant prostate cancer in the PROREPAIR-B cohort, Castro et al. found that, while germline mutations in ATM, BRCA1, BRCA2, or PALB2 were not significantly associated with prostate cancer-specific survival (different in survival 10 months, p=0.264) when considered in aggregate, germline BRCA2 mutations specifically were associated with significantly worse prostate cancer-specific mortality (17 months compared with 33 months, hazard ratio 2.11, p-value = 0.033)9. Further, there was a significant interaction between germline BRCA2 mutation status and treatment type with better survival among BRCA2 carriers treated with androgen axis-targeting agents such as abiraterone acetate or enzalutamide, as compared to those who received taxanes. In a cohort of 50 patients with heavily pretreated metastatic castrate-resistant prostate (100% receipt of docetaxel, 98% receipt of abiraterone or enzalutamide, 58% receipt of cabazitaxel), Mateo et al. found that patients with mutations in DNA-repair genes (including BRCA1/2, CHEK2, and Fanconi’s anemia genes) had a high response rate to the poly ADP-ribose polymerase (PARP) inhibitor olaparib11. These results were confirmed in the Phase II TOPARP-B trial and are currently being investigated in a Phase III trial.

Interestingly, in the cohort of Nicolosi et al., underlying germline mutations were identified more commonly in Ashkenazi Jewish patients (22.7%) and white patients (17.8%) than African American patients (10.1%) and Hispanic patients (6.4%)10. Importantly, a review of family history of 558 patients with available data demonstrated that a significant proportion of those with identified germline variants (37%) would not be eligible for genetic testing according to current guidelines. Of course, a clinical index of suspicion must have been presented in the treating clinician for these patients to have to undergo germline genetic testing and, as a result, these results may not be directly generalizable to most urologists’ practices.

In 2017, the Philadelphia Prostate Cancer Consensus Conference was convened to define the role of genetic testing in inherited prostate cancer13. The strongest conclusion of the expert panel was that patients should be engaged in the decision to pursue genetic testing. In patients with suspected hereditary prostate cancer, the panel recommended testing for HOXB13 while for those with suspected hereditary breast and ovarian cancer and for those with suspected Lynch syndrome, the panel recommended testing for BRCA1/2 and testing for DNA mismatch repair genes, respectively. In discussions regarding prostate cancer screening, the panel strongly felt that BRCA2 mutations should be considered while in men with more advanced disease, testing for BRCA1/2 and ATM should be considered. As highlighted previously, adherence to these (and other guideline recommendations) is likely to under-estimate the prevalence of germline mutations.

Somatic copy number alterations (SCNAs) are gains or losses in genetic material that affect a larger fraction of the cancer genome than do any other form of somatic genetic alteration14. They have an integral role in both the activation of oncogenes and the inactivation of tumor suppressor genes. SCNAs are found in nearly 90% of prostate tumors14.

As DNA unwinds, double-stranded breaks may occur. Improper repair of these can result in both intra- and inter-chromosome rearrangements. TMPRSS2:ERG is perhaps the best studied of these in prostate cancer. This rearrangement occurs in nearly 50% of all primary prostate tumors. Nam et al. showed that expression of this gene fusion confers an increased risk of disease relapse after treatment for clinically localized prostate cancer (hazard ratio 7.1, 95% confidence interval 1.1 to 45)14. A number of other rearrangements have been described in prostate cancer including ESRP1:CRAF, the ETS family and RAF kinase gene fusions14.

Prostate cancer has a somatic mutation rate between 1x10-6 and 2x10-6 which is similar to breast, renal and ovarian cancer14. With such a rate, each prostate tumor gene may have many thousand mutations although less than 20 are likely to affect protein stability or function. Examples of affected genes include HPC1/RNase L, HPC2/ELAC2, MSR1, HOXB13, and SPOP.

Genome-wide association studies have detected a wide variety of susceptibility loci (single-nucleotide polymorphisms, SNPs) that have been implicated in prostate cancer. These studies have typically been undertaken in European populations and in cases of sporadic prostate cancer14. For the most part, the implicated SNPs are found in intergenic regions and, as a result, many have no putative function. Examples of implicated SNPs include 8q24, MSMB, KLK2-3, HNF1B, JAZF1, LILRA3, 10q26, 15q21, and many more.

MicroRNAs (miRNAs) are a class of small non-coding RNA which bind to messenger RNA (mRNA) in a manner to modulate mRNA expression. For the most part, miRNA-mRNA interactions result in down-regulation though a small number cause up-regulation or complete destruction of the mRNA target. MicroRNA can either initiate carcinogenesis or drive disease progression14. Unlike germline or somatic DNA mutations, miRNA expression is dynamic and both their expression and target may vary within the same cell depending on time or circumstance. This allows for significant signal amplification as a single protein may act via a small number of miRNAs to influence many genes14. MicroRNA have been implicated in apoptosis avoidance (eg. miR-17-92 and miR-21), in cellular signaling pathways (eg. miR-221 and miR-15a), in androgen signaling (eg. miR-21 and miR-141)14.

Finally, aberrant DNA methylation is a hallmark of prostate cancer15. These changes often result in growth dysfunction. Methylation-based markers are stable and thus offer a potential for biomarker utilization16.