Although PSMA PET/CT continues to exhibit superior diagnostic performance compared to conventional imaging in this setting, the clinical significance of this improved detection remains a matter of debate. It is important to understand the benefits and risks of tailored therapy in response to findings on these scans. Efficacy, safety, and quality of life, not of the PET imaging modality itself, but of the downstream site-directed and systemic therapeutics used in response to imaging findings, need to be fully determined. In this Center of Excellence article, we review the current evidence available for PSMA PET/CT in patients with conventional imaging-defined metastatic hormone sensitive prostate cancer and both non-metastatic and metastatic castrate-resistant prostate cancer.

Systemic therapy with androgen deprivation and either androgen axis targeted therapies (ARAT), docetaxel, or both remains the standard of care treatment for patients with metastatic hormone sensitive prostate cancer detected on conventional imaging. However, there remains an interest in defining a cohort of patients with oligometastatic disease, classically defined as three to five metastatic sites or less, who might benefit from metastasis-directed therapy (MDT). The two major phase II trials in this disease space, ORIOLE and STOMP, have evaluated the role of MDT in patients with evidence of oligometastatic disease on the basis of conventional imaging and choline PET, respectively. Recently published pooled data from the two trials demonstrates that MDT in these patients improves progression-free survival from 5.9 months (95% CI: 3.2 – 7.1) to 11.9 months (95% CI: 8.0 – 18.3; HR: 0.44, p<0.001), without any significant improvements seen in radiographic progression-free survival, time to castration-resistant disease, or overall survival.1

But does PSMA PET/CT provide additional information in these patients with evidence of oligometastatic disease on conventional imaging? In the ORIOLE trial, pre-treatment 18F-DCFPyL-PET/CT was performed in all patients assigned to the MDT arm (n = 36). Notably, the treating physicians and patients were blinded to the results of these scans. Of the 36 patients treated with stereotactic ablative radiotherapy, 16 (44.4%) had baseline PET-avid lesions that were not included in the treatment fields. These patients had significantly worse 6-month progression rates of 38% (95% CI: 18.5 – 61.5%) compared to those with no untreated lesions (5%,95% CI: 0 – 26.8%) (p = 0.03). Further, those with untreated sites of disease had higher rates of new metastases (per conventional imaging) at 6 months (62.5% versus 15.8%, p = 0.006) and worse median distant metastasis-free survival of 6.0 versus 29.0 months (HR: 0.19; 95% CI: 0.07 – 0.54, p<0.001). These results highlight the importance of targeting all sites of disease in the context of MDT for oligometastatic disease, and, particularly, the value of PSMA PET/CT-for defining this with increased sensitivity compared to conventional imaging.2

Results of a prospective, single center study of patients with PSMA PET/CT-diagnosed, recurrent oligometastatic prostate cancer (one to three lesions) was published in 2018. This study included 57 patients, of whom 50 (88%) had received a radical prostatectomy. Sites of oligometastasis included the lymph nodes and bone only (no viscera). Patients received SBRT (20Gy/1# or 24Gy/2# to bone metastases, and 50Gy/5# or 30Gy/3# to lymph nodes), but no ADT. Biochemical failure was defined as a PSA of nadir + 0.2 ng/ml following SBRT. The median time from definitive treatment to SBRT was 5.6 years. Thirty-seven patients (65%) had lymph node-only disease, while 18 (31%) had bone-only metastasis. Median follow up was 16 months, and the median biochemical disease-free survival for the cohort was 11 months. All patients with biochemical failure (n = 43) underwent a repeat PSMA PET/CT scan, which revealed no in-field failures.3

Non-metastatic castrate-resistant prostate cancer (nmCRPC) is defined by biochemical progression with three consecutive rises in PSA resulting in two 50% increases over the nadir and PSA >2 ng/ng/ml (EAU definition) or PSA >1 ng/ml (Prostate Cancer Working Group 3 [PCWG3]), appropriate suppression of serum testosterone levels (<50 ng/dl), and no evidence of metastatic disease on conventional imaging. While the pivotal phase III trials in this disease space (SPARTAN,4 PROSPER,5 and ARAMIS6) have demonstrated improved metastasis-free survival with ARAT addition to ADT (on the basis of negative conventional imaging for trial entry), the reality is that the emergence of PSMA PET/CT is shrinking this disease space. When considering the performance of PSMA PET/CT in the CONDOR trial which included patients with biochemical failure and negative/equivocal findings on conventional imaging (similar to nmCRPC patients) and the inclusion criteria of the aforementioned three trials (baseline PSA ≥ 2 ng/mL and PSA doubling time ≤ 10 months), a sensitivity of at least 85% for detection of metastatic disease spread would be expected in such patients had PSMA PET/CT been used instead of conventional imaging. This hypothesis has subsequently been tested in multiple studies. 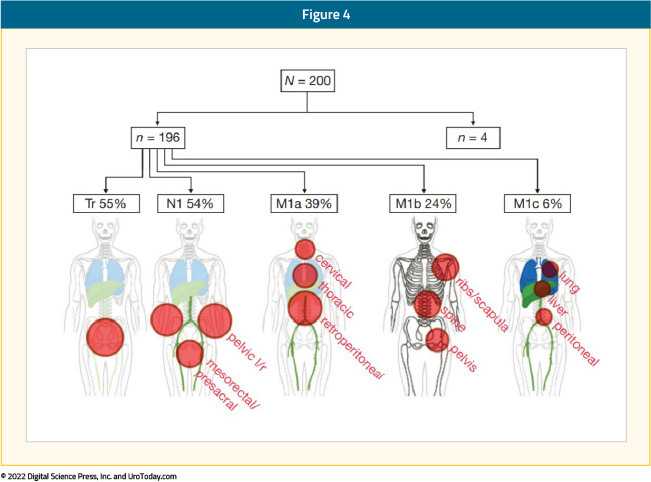 The improved diagnostic performance of PSMA PET/CT has led to this imaging modality being increasingly used in three different domains within this disease space: selection of oligometastatic patients who may benefit from metastasis-directed therapy, prediction of response to radioligand therapy, and monitoring of disease response to systemic therapy.

Prediction of Response to Radioligand Therapy 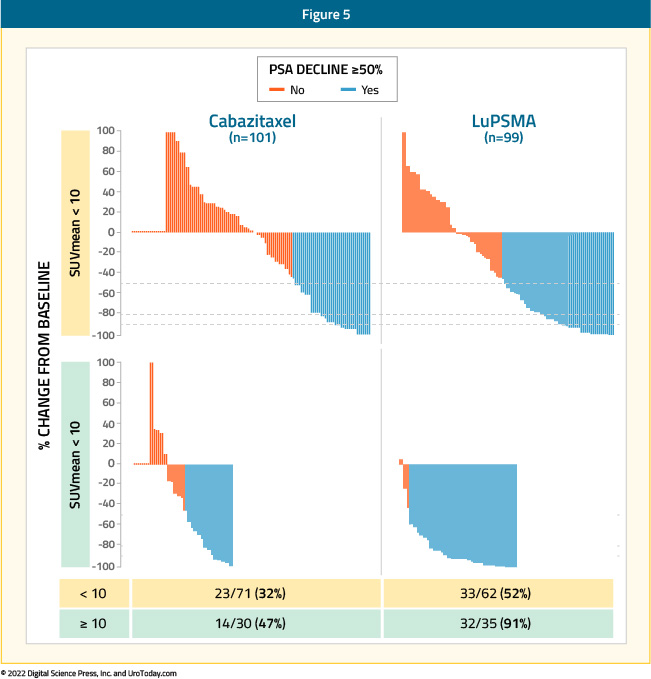 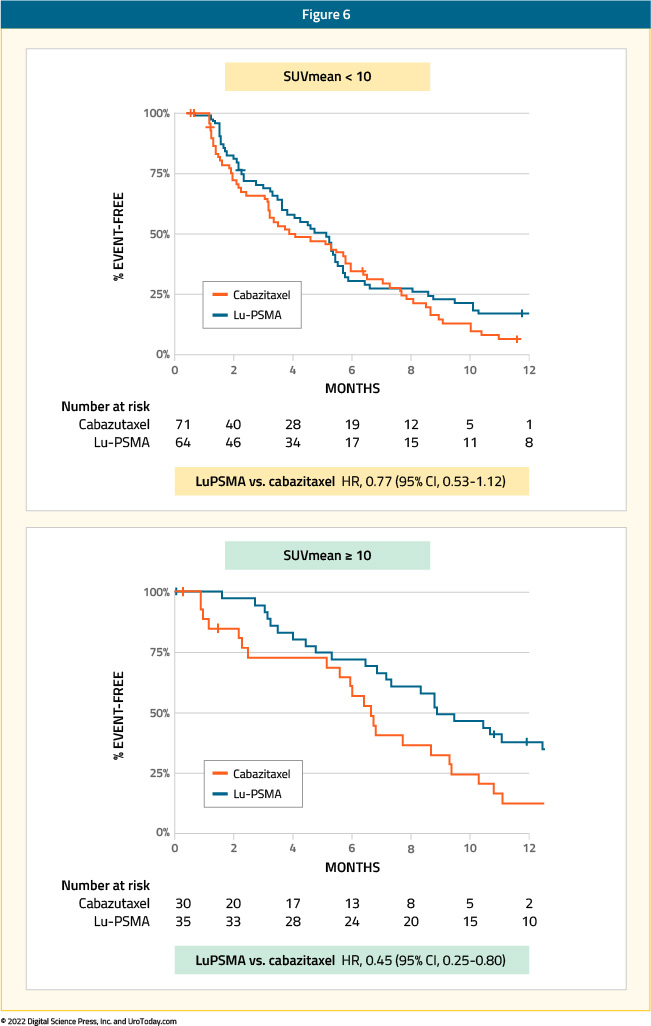 Similar ad-hoc analysis from the VISION trial (NCT03511664) presented at ASCO 2022 evaluated the association between quantitative PSMA imaging parameters and treatment outcomes. To briefly summarize, the VISION trial enrolled adult patients who had previously received treatment with at least one ARAT and 1–2 taxane regimens for mCRPC. These men were randomized 2:1 to 177Lu-PSMA-617 (7.4 GBq Q6W, up to 6 cycles) + standard of care or standard of care alone. Protocol-permitted standard of care excluded cytotoxic chemotherapy, systemic radioisotopes, immunotherapy, or other investigational drugs. In terms of imaging inclusion and exclusion criteria, men had to have at least one PSMA-positive (+) and no PSMA-negative lesions. Among 551 potentially eligible patients, 548 had imaging data that met quality requirements. PSMA expression was quantified by five PET parameters: PSMA+ lesions by region, SUVmean, SUVmax, PSMA+ tumor volume, and tumor load (PSMA+ tumor volume × SUVmean). The association between PET parameters and the clinical outcomes of rPFS, OS, objective response rate, and PSA50 response were assessed.

As seen in the TheraP trial, higher whole-body SUVmean was associated with improved clinical outcomes: those patients in the highest quartile (SUVmean ≥10.2) had a median rPFS and OS of 14.1 and 21.4 months, compared to 5.8 and 14.5 months for those in the lowest quartile (SUVmean<6.0), respectively. 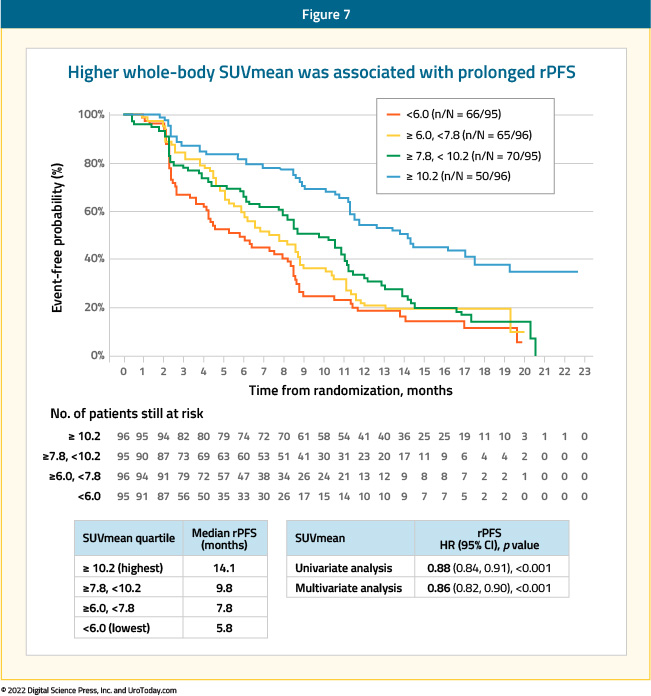 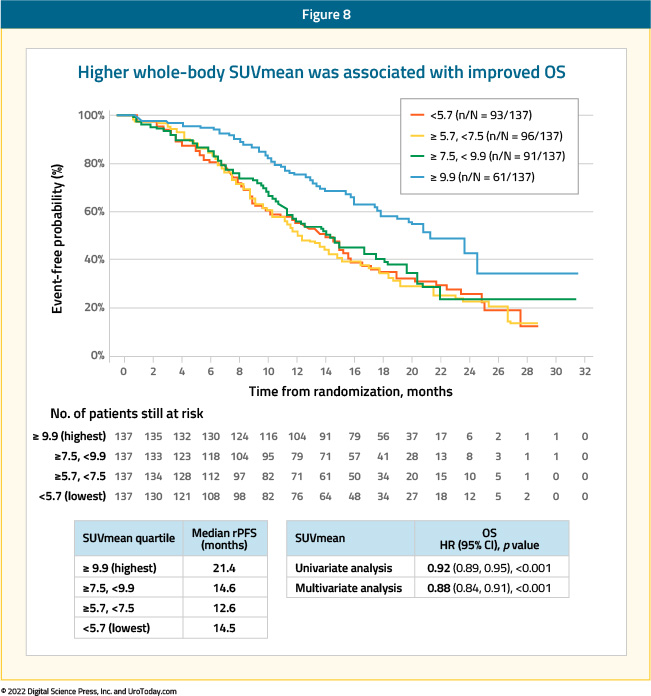 To screen into VISION, patients had to have at least one PSMA-positive (i.e. PSMA uptake >liver) and no PSMA-negative lesions. Out of 1,003 screened patients, 126 (12.6%) were screen failures. But how does the outcome of such patients excluded by the VISION-PET criteria compare to those who met the eligibility criteria? A multi-institutional, retrospective analysis of patients receiving at least one dose of LuPSMA compared the outcomes of 29 patients whose PSMA imaging characteristics would have deemed them VISION screen failures to those of 275 patients who met the eligibility criteria. Patients who would have been screen failures had worse PSA50 response rates (21% vs 50%; p = 0.005), any PSA response rate (41% vs 71%; p = 0.003), median PSA PFS (2.1 versus 4.1 months, p = 0.023), and tended to have a shorter OS (9.6 months versus 14.2; p = 0.16).

Presented at ASCO 2022, an international multicenter retrospective analysis of 237 men with mCRPC treated with 177LuPSMA evaluated PSMA PET/CT radiographic predictors of treatment response. Patients were divided into three groups according to the SUVmean ratio of whole-body-tumor to parotid gland uptake: 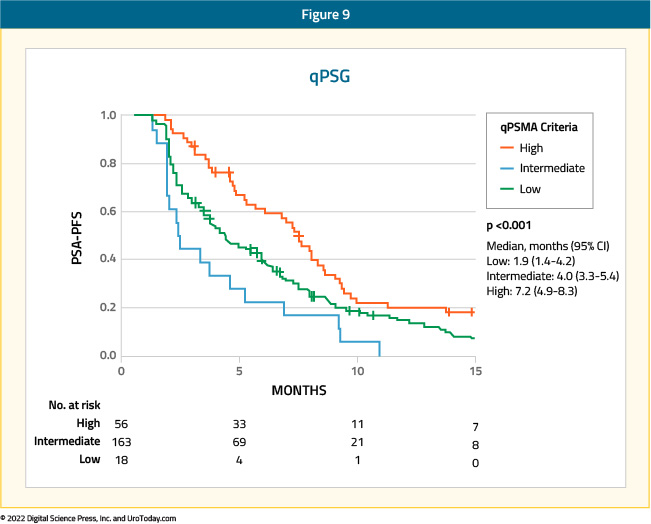 PSMA PET/CT has also been used for monitoring of treatment response in patients receiving systematic therapy for advanced prostate cancer. In theory, the improved diagnostic performance of this imaging modality may lead to more sensitive detection of metastatic disease, help identify early therapeutic failure and, thus, minimize unnecessary treatment-related morbidity. However, the reliable use of PSMA PET/CT in this disease space has proven to be challenging due to a number of reasons. Whereas PSMA is uniformly expressed in early prostate cancer, the characteristics of PSMA expression in advanced prostate cancer and the impact of prior or ongoing systemic therapies on expression levels remain less clear.

PSMA expression is regulated by the PSMA promoter and PSMA enhancer, located within the third intron of FOLH1. FOLH1 gene expression has been demonstrated to be upregulated by antiandrogen administration, leading to increased PSMA expression.10,11 This has been reflected in a PSMA “flare phenomenon” seen after initiation of antiandrogen therapy. A prospective study of eight patients (4 mHSPC, 4 mCRPC) starting treatment with ADT (mHSPC patients) or enzalutamide (mCRPC patients) evaluated the findings on serial 68Ga-PSMA-11 PET imaging before and after treatment initiation. Of the seven patients who achieved PSA declines of >50% from baseline, early increases in PSMA PET tracer uptake in at least one metastatic lesion were observed in six patients (85.7%). Overall, 22 of 45 metastatic lesions (49%) exhibited early increases in PSMA uptake that were indicative of a flare effect rather than disease progression. This flare phenomenon appears to peak three to four weeks after the start of antiandrogen therapy.12

This transient PSMA increase after initial ARAT exposure has formed the basis for the ENZA-p phase II trial that will randomize 160 mCPRC patients to enzalutamide without or without 177Lu-PSMA-617 (NCT04419402). However, this PSMA flare pattern has not been consistently seen in other studies. Emmett et al prospectively performed serial 68Ga-PSMA-11 PET/CT in 8 men with mCSPC starting ADT and 7 men with mCRPC commencing either enzalutamide or abiraterone. In mCSPC patients, a reduction from baseline SUVmax occurred in 86.5% (6/7) men by day 9 (P < 0.04), with an associated PSA response in 100% men and total tumor volume reduction by 74.5%. Conversely, in patients with mCRPC, all men demonstrated an increase in SUVmax and SUVmean on PSMA PET compared with baseline.13 The authors concluded that there is a rapid dichotomous response to ADT depending on the presence of a CSPC or CRPC phenotype.13 Further studies evaluating PSMA expression response to androgen blockade have demonstrated inconsistent results, varying by castration resistance phenotype. Overall, it appears that prolonged androgen blockade is associated with decreased PSMA expression and that persistent/increased PSMA expression in metastatic deposits, despite a clinical and PSA response, might correlate with cell clones that become castration-resistant first.14,15

Response Evaluation Criteria in Solid Tumors (RECIST) had long been the mainstay tool for assessing treatment response in clinical trials of patients with metastatic prostate cancer. In 2009, The Positron Emission Tomography Response Criteria in Solid Tumors (PERCIST) criteria were proposed. PERCIST is not specific to prostate cancer, and multiple studies have since sought to validate these criteria in mHSPC and mCRPC patients. Seitz et al compared imaging and PSA response in 23 prostate cancer patients (6 mHSPC and 17 mCRPC) undergoing treatment with docetaxel. The authors found a higher level of agreement between PSA response and treatment response pursuant to PERCIST (6/7 patients) versus RECIST v1.1 and PSA response (3/6 patients).16 Similar findings were seen in a retrospective analysis of 43 mCRPC patients undergoing systemic therapy that showed that changes in PSMA volume and PERCIST and RECIST measurements were correlated with PSA response but not overall survival.17 Conversely, Kallur et al. did not observe a statistically significant correlation between biochemical response and PERCIST response in a retrospective analysis of 51 patients.18 Given the inconsistency of these findings and the lack of specificity of the PERCIST criteria to prostate cancer, the PSMA PET Progression criteria have been proposed by Fanti et al.19 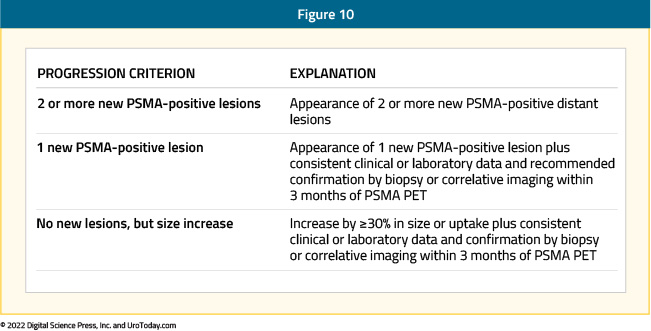 While these criteria have yet to be prospectively validated, they do highlight the importance of adoption of new criteria for monitoring of treatment response in this disease space, given the increasing reliance on PSMA PET/CT in clinical trials and the lack of PSMA PET incorporation in the most recent Prostate Cancer Working Group 3 (PCWG3) update.

PSMA PET/CT, in addition to reshaping staging of high-risk disease and men with biochemical recurrence, has also proven useful in patients with advanced prostate cancer. Indeed, PSMA PET/CT for men with nmCRPC based on conventional imaging has identified oligometastatic “very low-volume” mCRPC in the majority of these men, for which long-term outcomes of changes in management remain to be determined. Furthermore, post-hoc analyses of radioligand therapy trials suggest that PSMA PET/CT may function as a biomarker for selecting men that are most likely to benefit from therapy. As highlighted above, the clinical trial space for MDT across the prostate cancer landscape is robust, for which PSMA PET/CT staging is likely to be featured prominently.