While the emergence of castration resistant disease comes as a result of the disease progressing in spite of castrate levels of testosterone (at times called hormone refractory disease), prostate cancer (even in the castration resistance prostate cancer (CRPC) setting) remains heavily dependent on the androgen axis. Thus, novel treatment approaches have targeted other aspects of these signaling pathways with considerable clinical benefit. This mCRPC Center of Excellence article will focus on treatment advances related to novel hormonal therapies (NHTs).


Currently, abiraterone is approved in both the pre- and post-docetaxel spaces; however, the initial FDA approval was in the ç setting based on the results of the COU-AA-301 trial. In this trial, 1,195 patients who had previously received docetaxel were randomized in a 2:1 fashion to abiraterone 1,000 mg + prednisone 5 mg BID versus placebo + prednisone 5 mg BID. This trial met its primary endpoint of improved overall survival (OS) (14.8 months versus 10.9 months; HR 0.65, 95% CI 0.54 to 0.77; p<0001): 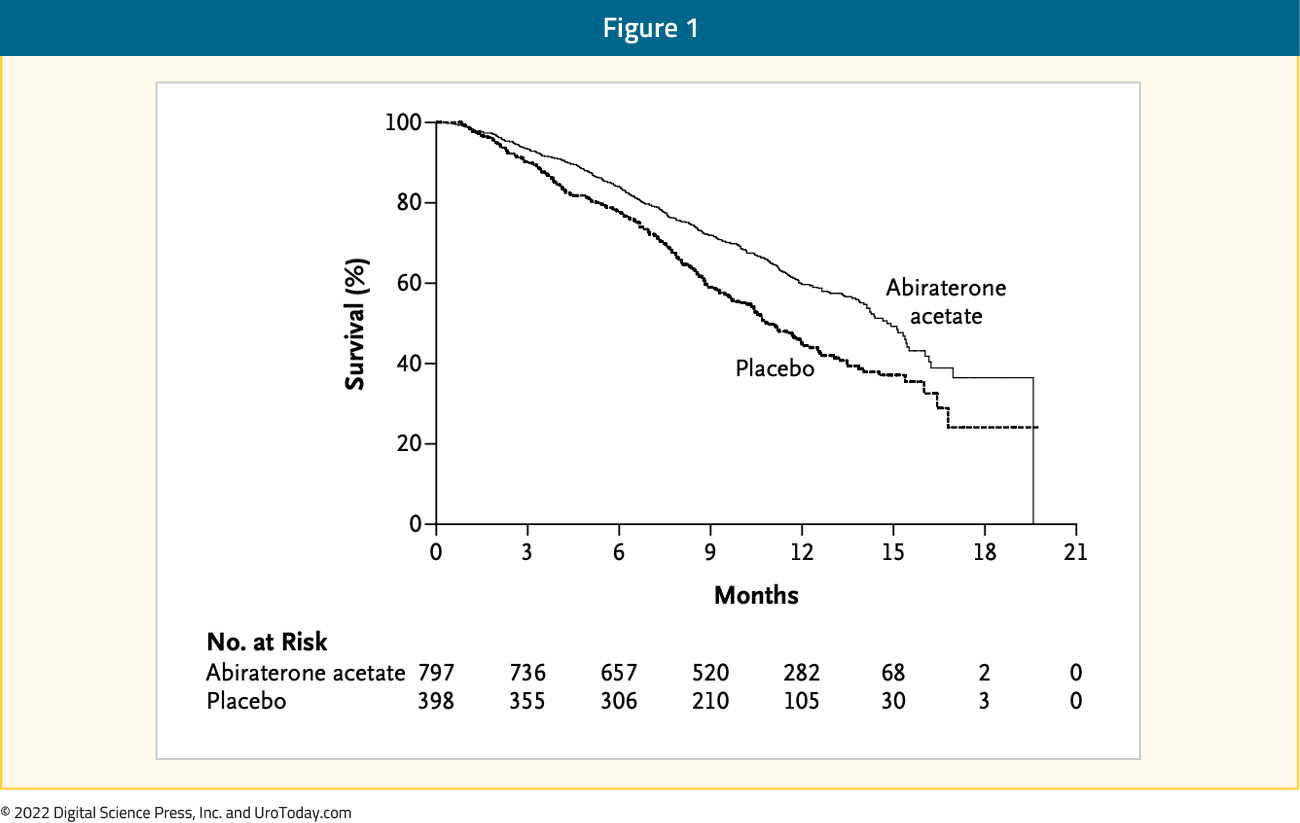 Following shortly after COU-AA-301, the COU-AA-302 trial evaluated abiraterone acetate plus prednisone in mCRPC patients who had not previously received chemotherapy. In this double-blind, phase III randomized trial, Ryan et al. randomized 1,088 patients to receive abiraterone acetate (1000 mg) plus prednisone (5 mg twice daily) or placebo plus prednisone. The co-primary endpoints of this trial were radiographic progression-free survival (rPFS) and OS. Patients in the abiraterone arm had significant improvement in rPFS (16.5 months versus 8.3 months; HR 0.53, 95% CI 0.45 to 0.62, p < 0.001) and OS (HR 0.75, 95% CI 0.61 to 0.93, p = 0.01): 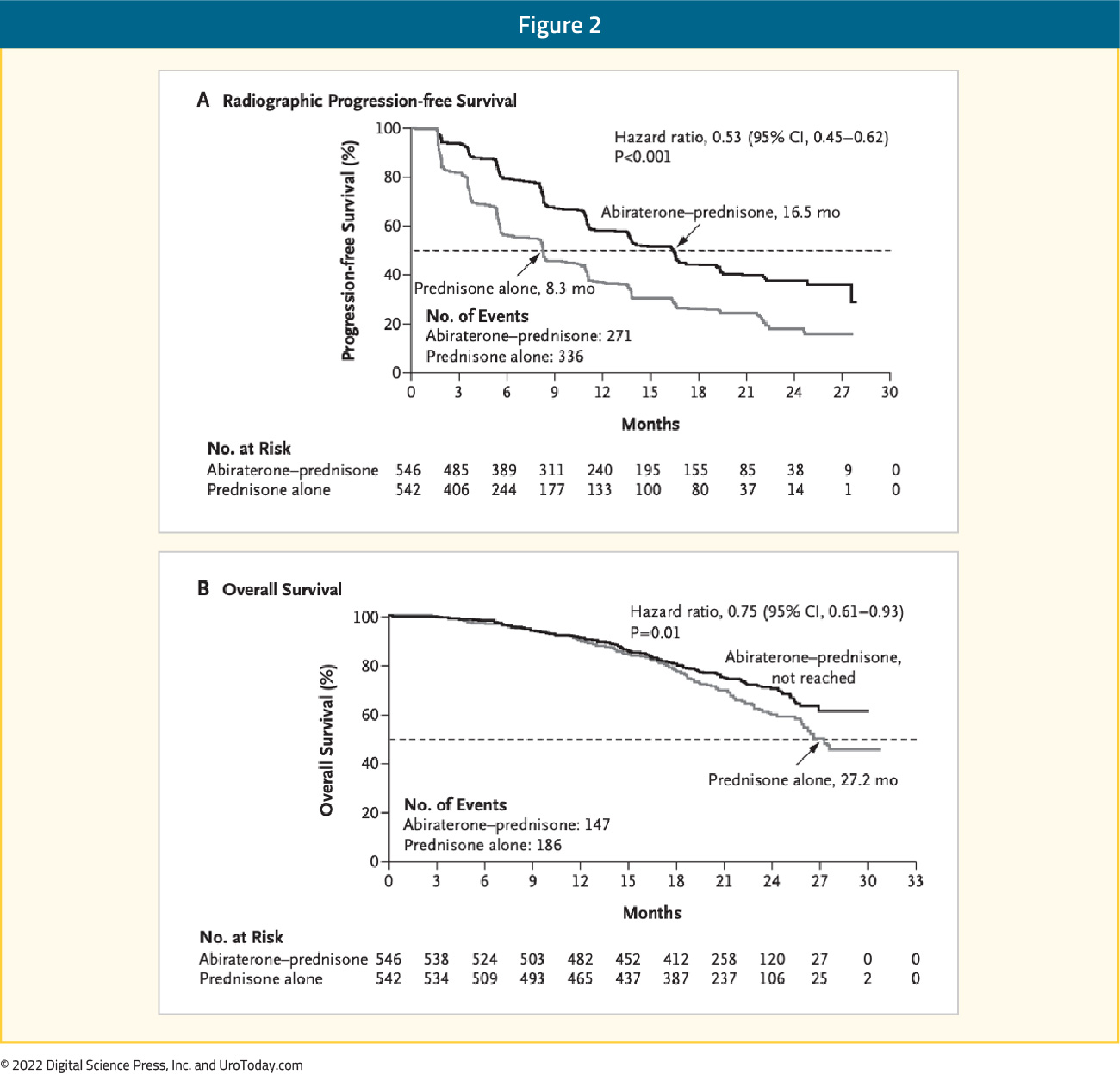 
FDA Approved in 2012 in the Post-Chemotherapy Setting (AFFIRM Trial)


Similar to abiraterone, enzalutamide was first approved in the post-docetaxel setting. The AFFIRM trial was a phase III, double-blind, placebo-controlled trial that randomized 1,199 men with mCRPC, that progressed after chemotherapy, in a 2:1 fashion to receive oral enzalutamide at a dose of 160 mg per day or placebo. The primary endpoint of OS was significantly improved in the enzalutamide arm (median 18.4 months versus 13.6 months; HR 0.63, 95% CI 0.53 to 0.75, p < 0.001): 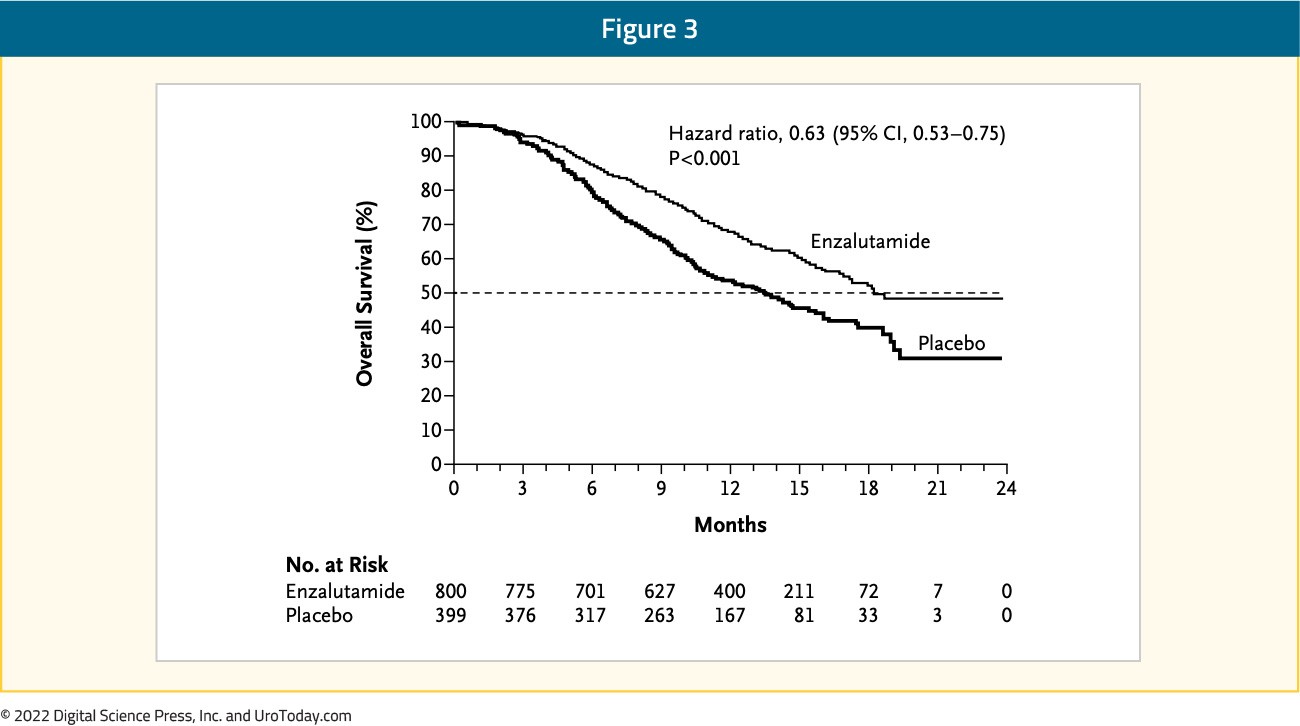 FDA Approved in 2014 in the Pre-Chemotherapy Setting (PREVAIL) 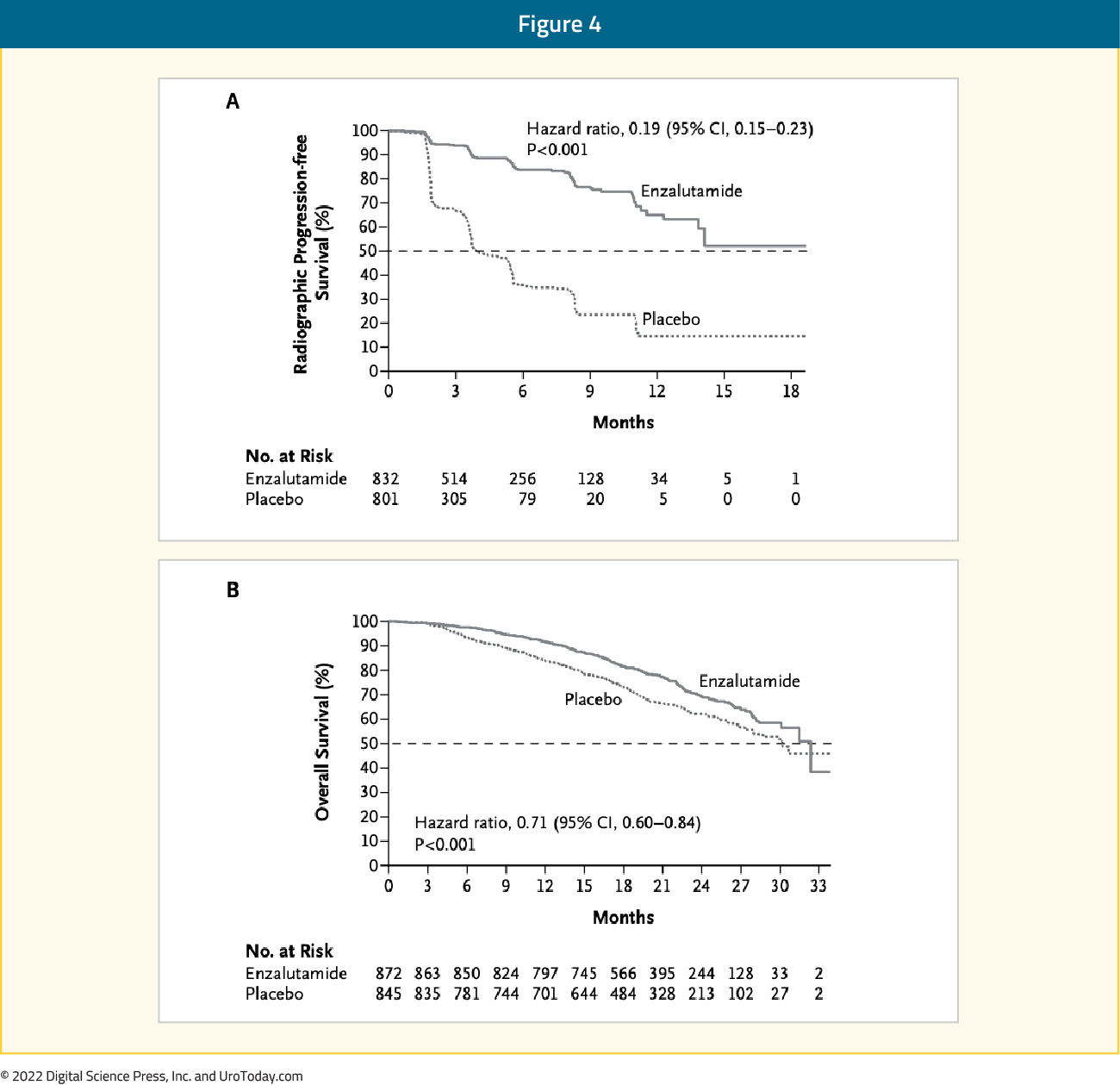 The benefit of enzalutamide was shown with respect to all secondary endpoints including the time until the initiation of cytotoxic chemotherapy (HR 0.35), the time until the first skeletal-related event (HR 0.72), a complete or partial soft-tissue response (59% vs. 5%), time to PSA progression (HR 0.17), and the rate of decline of at least 50% in PSA (78% vs. 3%) (p < 0.001 for all comparisons. A similar AE profile was seen to that in the AFFIRM trial.4,5


Although AR inhibition remains the mainstay treatment for prostate cancer, therapeutic resistance to AR inhibition is almost universal. Prostate cancer cells can develop resistance to androgen ablation through an adaptive marked upregulation of ARs over time in response to low-androgen condition. This upregulation can make these cells vulnerable to supraphysiologic testosterone exposure. Bipolar androgen therapy (BAT) has been advocated as a technique to overcome AR therapeutic resistance. Rapid cycling between polar extremes of supraphysiologic and near-castrate serum testosterone in asymptomatic men with mCRPC has proven to be safe and effective. Several trials have assessed the efficacy of BAT in the mCRPC setting.

TRANSFORMER is a multicenter, open-label, phase II trial that randomized 195 men with mCRPC who had disease progression after treatment with abiraterone to either BAT or enzalutamide. Patients were maintained on continuous testosterone suppression during the trial and subsequently randomized in a 1:1 fashion to either testosterone cypionate 400 mg IM every 28 days or enzalutamide 160 mg PO daily. Both arms had similar PFS (5.7 months; HR 1.14, 95% CI 0.83 to 1.55): 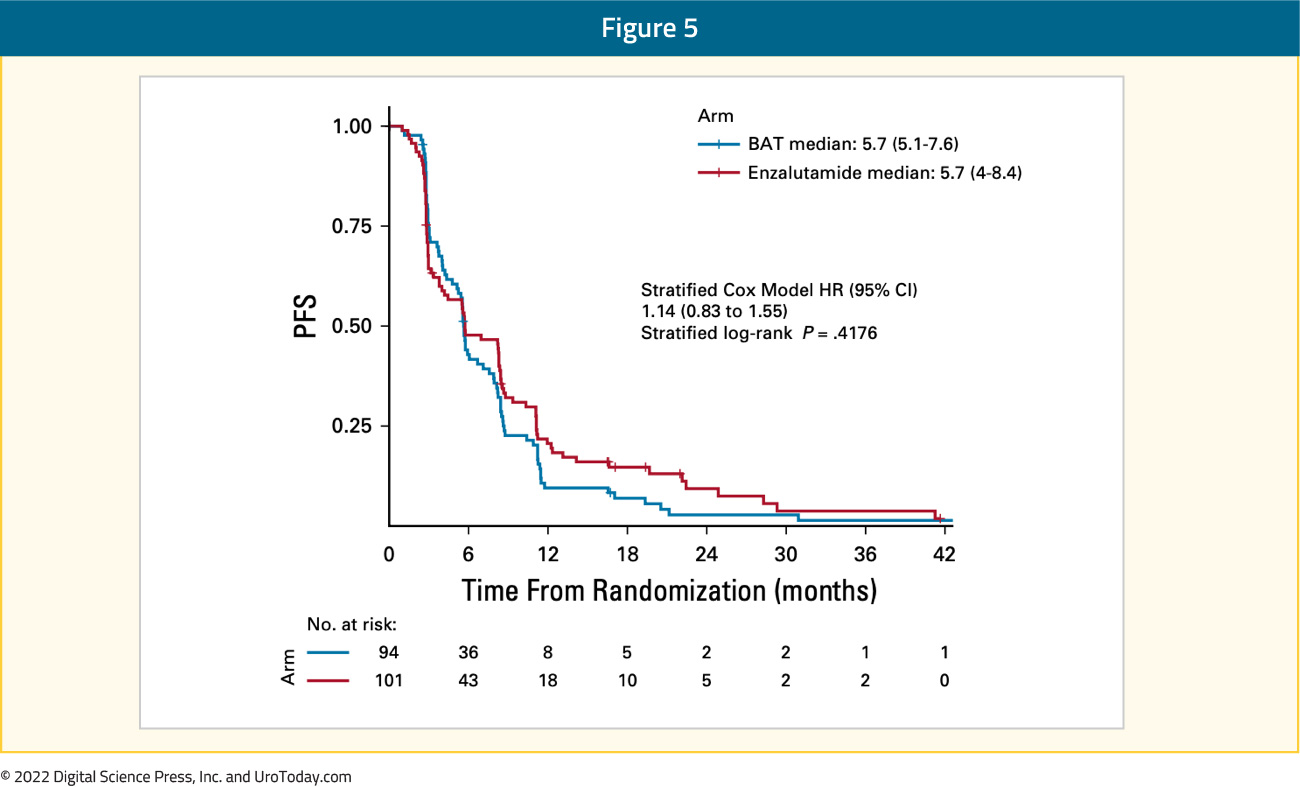 and PSA50 responses (BAT: 28.2% versus enzalutamide: 25.3%). However, at crossover, which was permitted at progression in asymptomatic patients, PSA50 responses occurred in 77.8% of patients crossing to enzalutamide and 23.4% to BAT. The PSA-PFS for enzalutamide increased from 3.8 months after abiraterone to 10.9 months after BAT. The PFS2 for BAT → enzalutamide was 28.2 versus 19.6 months for enzalutamide → BAT (HR 0.44; 95% CI 0.22 to 0.88). This demonstrates the impact of early BAT on re-sensitizing ARs to a repeat ARTA challenge. OS was 37.1 months for patients crossing from BAT to enzalutamide versus 30.2 months for the opposite sequence (HR 0.68; 95% CI 0.36 to 1.28; p = 0.23). Serious AEs were non-significantly different between the two arms (affecting approximately 20% of patients in each group). Patient-reported quality of life measures consistently favored BAT.6


RESTORE is a phase II trial from Johns Hopkins University that included 59 patients with mCRPC that progressed after either enzalutamide or abiraterone treatment who all subsequently received BAT: continuous testosterone suppression with testosterone cypionate injections every 28 days. Following progression on BAT, patients were rechallenged with their most recent AR-targeted therapy. PSA50 responses were seen in 30% and 17% of the enzalutamide and abiraterone pre-treated cohorts, respectively (p = 0.4). PSA50 responses to AR-targeted therapy rechallenge were higher in the enzalutamide pre-treated cohort (68% vs 16%, p = 0.001). The median time from enrollment to progression following rechallenge with AR-targeted therapy was longer in the post-enzalutamide versus post-abiraterone patients (12.8 vs 8.1 months, p = 0.04).7


Prior to the emergence of further treatment options with novel mechanisms of action, there was a question of rationale drug sequencing following the approval of 2nd generation anti-androgens (abiraterone and enzalutamide) in the mCRPC setting. This relates in large part to the issue of acquired resistance to each agent and the potential for cross-resistance. In a phase II trial published in Lancet Oncology in 2019, Khalaf et al. demonstrated that the sequence of abiraterone followed by enzalutamide was associated with superior time to second PSA progression by 4 months and had deeper response to second line therapy compared to those who received enzalutamide followed by abiraterone. It must be noted however that overall response rates were modest in both arms (PSA response rate: 36% for abi-enza versus 4% for enza-abi sequences) and a re-challenge with a different NHT is not an ideal treatment strategy given the emergence of multiple agents with different mechanisms of action.8

Moving from sequencing of these agents, we can consider an alternative question: what about using these two agents in combination? It was theorized that adding abiraterone to enzalutamide may dampen the compensatory autocrine and paracrine androgenic stimulation seen with the use of enzalutamide. Presented at ASCO 2019, Alliance A031201, a phase III trial of enzalutamide alone versus enzalutamide and abiraterone in 1,311 men demonstrated no significant difference in OS (33.6 versus 32.7 months, p = 0.53) and was significantly associated with an increase in grade 3-5 AEs (55.6% and 68.8%, respectively).

Additionally, the combination of abiraterone and apalutamide versus abiraterone and placebo was evaluated in the ACIS trial. This was a randomised, placebo-controlled, double-blind, phase 3 study of 982 men with chemotherapy-naïve mCRPC who had not been previously treated with androgen biosynthesis signalling inhibitors and were receiving ongoing ADT. Following a median follow-up of 54.8 months, radiographic progression-free survival in the combination arm was 24.0 months versus 16.6 months (HR 0.70, 95% CI 0.60 to 0.83; p < 0.0001):

Given the availability of multiple AR inhibitor options in the mCRPC setting, what agents would patients prefer? The ODENZA trial was a randomized, cross-over phase II trial of 200 mCRPC patients who were randomized in a 1:1 fashion to darolutamide 1200 mg daily for 12 weeks followed by enzalutamide 160 mg daily for 12 weeks or the reverse sequence. Although the differences were not statistically significant, 48.5% of patients preferred darolutamide compared to 40.0% preferring enzalutamide. Reasons for this preference included lower levels of fatigue (44% vs 29%), ease of taking the medication (37% vs 31%), better quality of life (36% vs 28%), ability to be more active (26% vs 15%), ability to concentrate (22% vs 15%) and less falls (6% vs 3%).10

While these agents have proven efficacy in mCRPC, nearly all patients will eventually have disease progression. In this scenario, traditionally, treatment is switched with the treatment used at the time of progression being ceased before a new treatment started. However, the question arises, ”should NHTs be continued in mCRPC patients who progress on such treatment regimens?” Patients who develop castration resistance following continuous testosterone suppression are frequently maintained on ADT irrespective of the next agent chosen. The utility of continued NHT treatment in patients who progress on such regimens remains unknown. Presented at ASCO GU 2022, the PRESIDE trial (NCT02288247) evaluated the efficacy/safety of continuing enzalutamide with ADT for mCRPC patients who received second-line docetaxel and prednisolone after progression on enzalutamide and ADT. In this phase 3b study, patients were followed for two periods: “Period 1” (P1), where all patients received open-label enzalutamide (160 mg) and ongoing ADT. Those patients who experienced a PSA increase of ≥50% change between baseline and week 13 and subsequently showed evidence of disease progression were eligible for “period 2” (P2). Of 687 patients enrolled in period 1,273 patients were randomized during period 2. PFS was significantly longer among patients receiving continued enzalutamide (9.53 months; 95% CI 8.3 – 10.9), compared to placebo (8.28 months; 95% CI 6.3 – 8.7) during period 2 (HR 0.72, p = 0.027):

This finding was consistent across a number of subgroup analyses based on ECOG performance status, age, Gleason score, disease location, the presence of visceral disease, and baseline PSA. Furthermore, patients randomized to ongoing enzalutamide had a significantly longer time to PSA progression, greater mean PSA response, and superior complete/objective response rate. Grade 3/4 treatment-emergent AEs were reported by 84 (61.8%) patients randomized to enzalutamide and 84 (62.2%) randomized to placebo. Thus, it appears that the continuation of enzalutamide when initiating second-line docetaxel for mCRPC patients offers clinical benefits.

In contrast to those with disease progression, we can consider the role of maintenance therapy in patients with a treatment response? The phase II SAKK08/16 trial evaluated the efficacy of darolutamide maintenance therapy in mCRPC patients who were previously treated with novel hormonal agents and had non-progressive disease after subsequent treatment with a taxane (docetaxel in 93% of patients). Use of darolutamide 600 mg BID (versus placebo) was associated with significantly improved 12-month rPFS (64.7% versus 52.2%), median rPFS (5.5 versus 4.5 months, p = 0.02), event-free survival (5.4 months versus 2.9 months, p = 0.001) and median OS (24 months versus 21.3 months, p = 0.18).11


The emergence of NHTs in mCRPC has changed the treatment landscape, not only for the most advanced prostate cancer patients but also among men with nmCRPC and mHSPC. As with most agents available for men with mCRPC, the exact optimal sequence of treatment remains to be completely elucidated.