Prostate Radiotherapy in Patients with Metastatic Disease on Conventional Imaging

Several trials have recently assessed the impact of radiotherapy to the prostate in the setting of metastatic disease, given retrospective evidence that patients may derive a survival benefit for treatment to the primary prostate tumor. In addition to being a source of metastatic tumor cell dissemination into the circulation, the primary tumor may facilitate further proliferation of tumor cells at distant sites by secreting compounds into the circulation.1 As such, treatment of the primary tumor with radiotherapy may have both local and systemic benefits.

HORRAD was a multicenter prospective trial of 432 patients with previously untreated, de novo mHSPC at 28 centers across The Netherlands between November 2004 and September 2014. All eligible patients had a PSA >20 ng/ml and documented bone metastases on bone scan. Patients were randomized 1:1 to either androgen suppression alone or with external beam radiotherapy.

STAMPEDE (Arm H) was an open label, randomized controlled phase III trial of 2,061 men at 117 hospitals across Switzerland and the UK. This arm randomized patients with de novo mHSPC in a 1:1 fashion to standard of care with or without radiotherapy between January 2013 and September 2016. Standard of care was lifelong androgen suppression with upfront docetaxel permitted from December 2015 onwards (18% of total cohort). Men allocated radiotherapy received either a daily (55 Gy in 20 fractions over 4 weeks) or weekly (36 Gy in six fractions over 6 weeks) schedule that was nominated before randomization. 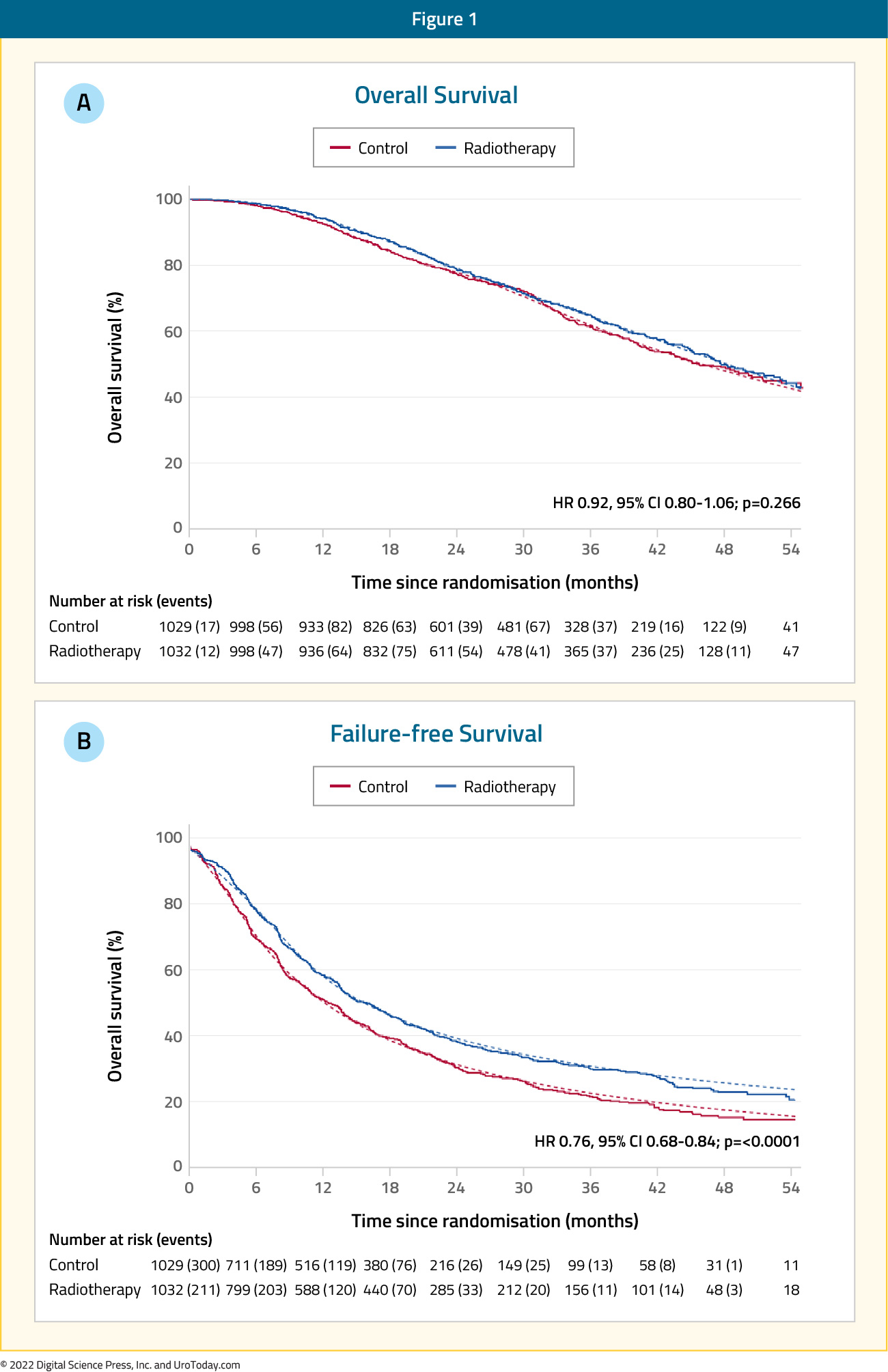 However, when stratified by metastatic burden, overall survival benefits were seen in the low volume group (HR: 0.68, 95% CI: 0.52 - 0.90) with restricted mean survival time improved by 3.6 months from 45.4 to 49.1. Of note, there were no significant differences between the two radiotherapy schedules, although outcomes tended to favor the daily, conventional fractionation schedule.3

A secondary analysis of the STAMPEDE Arm H trial evaluating the association of metastatic burden with survival benefit from prostate radiotherapy demonstrated that the survival benefit decreased continuously as the number of bone metastases increased, with benefit most pronounced up to 3 bone metastases. The magnitude of benefit from the addition of prostate radiotherapy was greater in patients with low metastatic burden with only nonregional lymph nodes (M1a) or 3 or fewer bone metastases without visceral metastasis (HR for overall survival: 0.62; 95% CI: 0.46 - 0.83; HR for failure-free survival: 0.57; 95% CI: 0.47 - 0.70) than among patients with 4 or more bone metastases or any visceral/other metastasis (HR for overall survival: 1.08; 95% CI: 0.91 - 1.28; interaction p= 0.003; HR for failure-free survival: 0.87; 95% CI: 0.76 - 0.99; interaction p=0.002).5 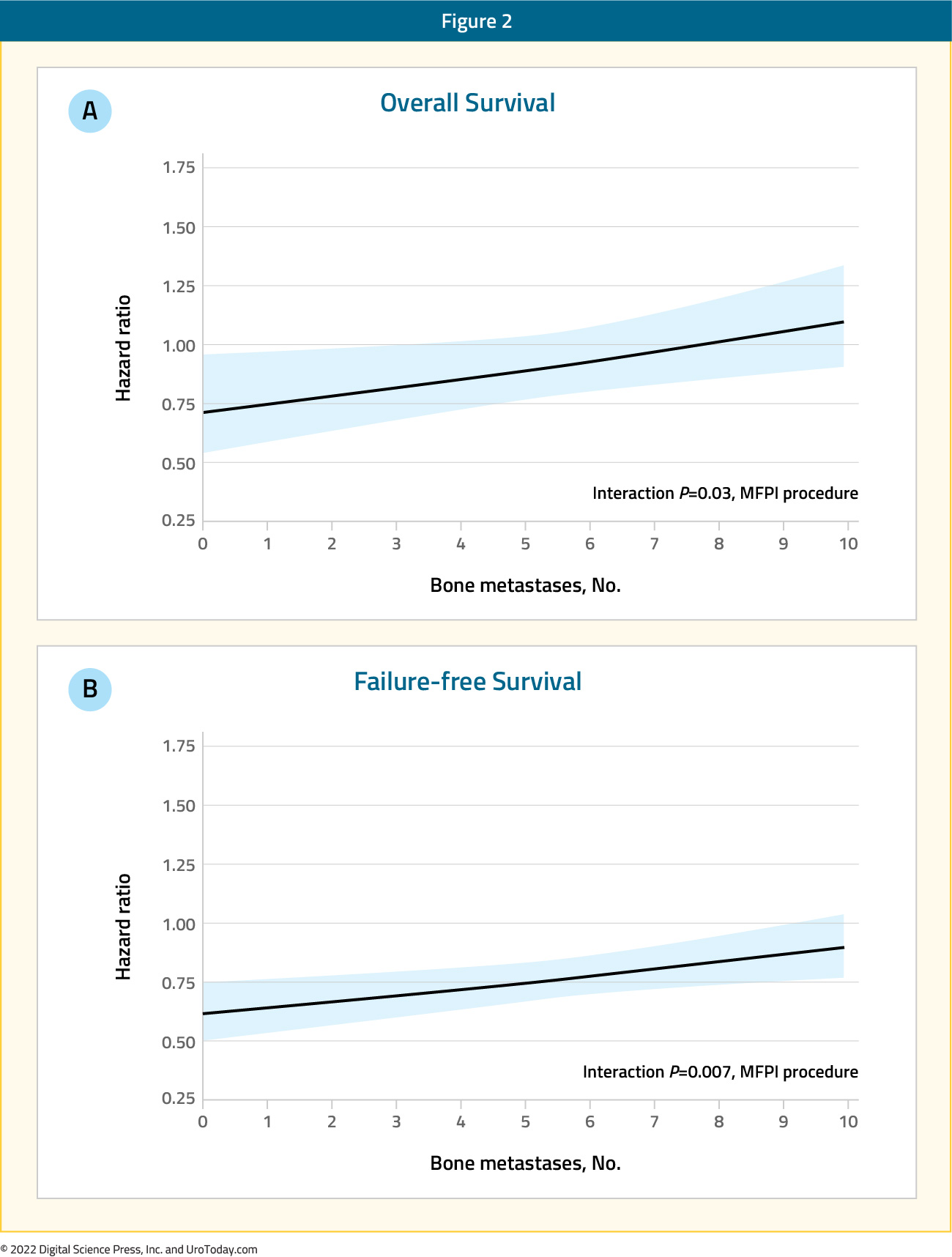 The SAABR trial will evaluate the combination of a GnRH analog, abiraterone acetate, atezolizumab and stereotactic body radiation therapy to the prostate in patients with metastatic hormone sensitive prostate cancer. The rationale for adding atezolizumab, a PD-L1 inhibitor, to this regimen is the known ability of SBRT to induce an immunogenic effect through enhanced expression of the PD-L1 protein on tumor and immune cells. Given the overall survival benefits to early treatment intensification with abiraterone (plus ADT) in patients with mHSPC6,7 and prostate radiotherapy in patients with CHAARTED low volume mHSPC,3 along with the non-overlapping toxicity profiles of these agents, the authors hypothesized that this combination treatment strategy could have potential synergistic effects.

Atezolizumab will be administered to men with newly diagnosed mHSPC by IV infusion (1200 mg IV over 60 minutes every 3 weeks) followed after Cycle 1 by abiraterone acetate (1000 mg PO every day with prednisone 5 mg daily), ADT (GnRH analog), and SBRT (7.25-7.50 Gy x 5 fractions to prostate and seminal vesicles every other day starting at Cycle 5 Day 1 ± 5 days) until unacceptable toxicity, protocol defined progression, or 2 years of treatment. Atezolizumab will be continued for a maximum of 2 years. Continuation of abiraterone acetate and ADT beyond 2 years is at the discretion of the treating physician per local standard of care. The study schema for SAABR is as follows: 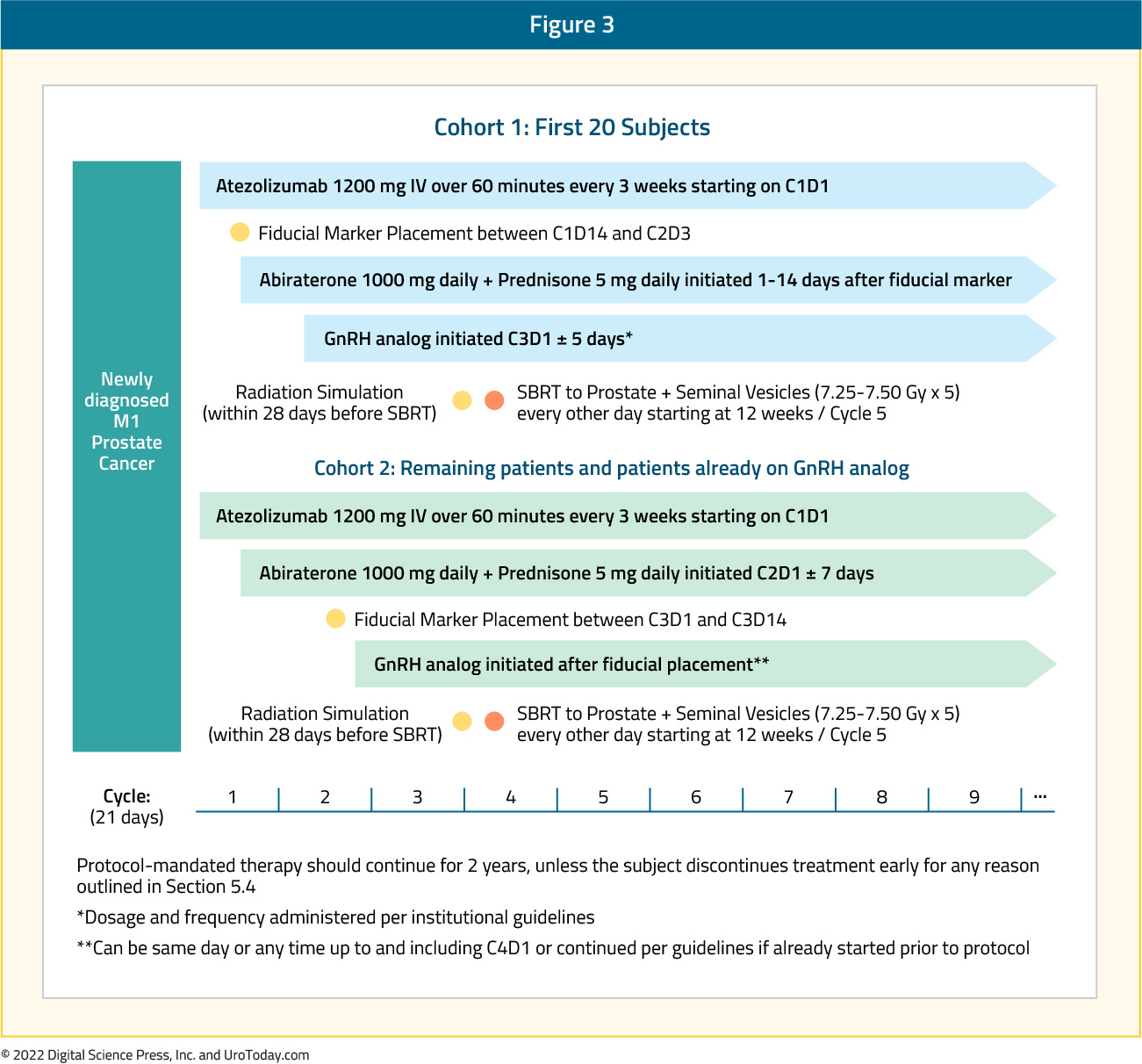 The primary objective of SAABR is to evaluate the failure-free rate at 2 years (binary endpoint), with failure defined as biochemical failure, radiographic progression (as defined by PCWG3), or death from any cause. Secondary objectives include symptomatic skeletal events defined as a symptomatic fracture (surgery or radiation to the bone or spinal cord compression), prostate cancer specific survival, overall survival, and safe and tolerability.

The STOMP trial was a multicenter, randomized phase II trial that prospectively evaluated the effects of metastasis-directed therapy for patients with evidence of oligometastatic disease on choline PET/CT (up to three extracranial sites) who had received prior treatment with curative intent and had evidence of biochemical recurrence with testosterone >50 ng/ml (i.e. metachronous, oligometastatic hormone sensitive prostate cancer). Between 2012 and 2015, 62 patients were randomized 1:1 and metastasis-directed therapy was with either SBRT or metastatectomy. The primary endpoint was time to initiation of ADT, initiated for symptoms, progression beyond three metastases, or local progression of known metastatic disease. The updated five-year results were presented at GU ASCO 2020. With a median follow up of 5.3 years, the five-year ADT-free survival was 8% in the surveillance arm compared to 34% for the MDT group (HR: 0.57, 95% CI: 0.38- 0 .84, log-rank p=0.06).  No differences were seen between groups when stratified by nodal versus non-nodal metastases. Secondary endpoint of CRPC-free survival at 5 years was 53% in subjects under surveillance and 76% in those receiving MDT (HR 0.62, 80% CI: 0.35 - 1.09).8

The ORIOLE trial was a randomized phase II trial of 54 men with metachronous, oligometastatic mHSPC (up to three sites). Metastatic sites were diagnosed via 18F-DCFPyL PET/CT. Between 2016 and 2018, patients were randomized in a 2:1 fashion to receive SABR or observation. The primary outcome was progression at 6 months, defined as serum PSA increase, progression detected by conventional imaging, symptomatic progression, androgen deprivation therapy initiation for any reason, or death. Progression at six months occurred in 7 of 36 patients (19%) receiving SABR and 11 of 18 patients (61%) undergoing observation (p = 0 .005). Treatment with SABR improved median progression-free survival (not reached vs 5.8 months; hazard ratio, 0.30; 95% CI, 0.11-0.81; p = 0.002). No toxic effects of grade 3 or greater were observed. The importance of treating all 18F-DCFPyL-PET/CT-detected lesions at time of MDT was highlighted by the worse 6-month progression rates in those with untreated lesions (38%) compared to those with no untreated lesions (5%, p = 0.03). Further, those with untreated sites of disease had higher rates of new metastases (per conventional imaging) at 6 months (62.5% versus 15.8%, p = 0.006) and worse median distant metastasis-free survival of 6.0 versus 29.0 months (HR: 0.19; 95% CI: 0.07 – 0.54, p < 0.001).9

SABR-COMET was a randomized, open-label phase II study of patients with oligometastatic disease (up to five sites) between February 2012 and August 2016. This trial was not restricted to patients with prostate cancer and also included lung, breast, and colorectal cancer patients. Of the 99 patients in this trial, 18 (182%) had prostate cancer. After stratifying by the number of metastases (1–3 vs 4–5), patients were randomized in a 1:2 fashion to receive either palliative standard of care alone or standard of care plus SABR. In an updated analysis published in 2020 (median follow up 51 months), the five-year OS rate was 17.7% (95% CI: 6-34%) in the control arm and 42.3% in the SABR arm (95% CI: 28-56%, stratified log-rank p = 0.006). The corresponding median overall survival was 28 months and 50 months, respectively. There were no new grade 2-5 adverse events and no differences in QOL between the arms.11,12

While the previous three trials (STOMP, ORIOLE, and SABR-COMET) evaluated the role of MDT in patients with oligometastatic, hormone sensitive prostate cancer, the ARTO trial (NCT03449719) sought to evaluate the role of MDT with SBRT in patients with oligometastatic (≤ 3 non-visceral metastatic lesions), castrate-resistant disease receiving abiraterone. This trial began recruiting in 2019 and is currently running in 16 Italian centers. At the time of presentation at ASCO GU 2022, 79% of the target accrual had been reached. Patients were randomized 1:1 to receive either abiraterone acetate alone or associated with concomitant SBRT on all sites of disease. The primary outcome of biochemical response was defined as a PSA decrease ≥50% from baseline within 6 months of treatment start. In 98 evaluable patients with at least 6 months of follow up, a biochemical response was noted in 82.5% of patients in the intervention arm compared to 71.7% in the control arm (OR: 1.83, 95% CI: 0.69 – 4.82, p = 0.22). A complete biochemical response (PSA < 0.2 ng/ml) was increased in the intervention arm (46.7% versus 28.3%; OR: 2.22, 95% CI: 0.96 – 5.12, p = 0.06): 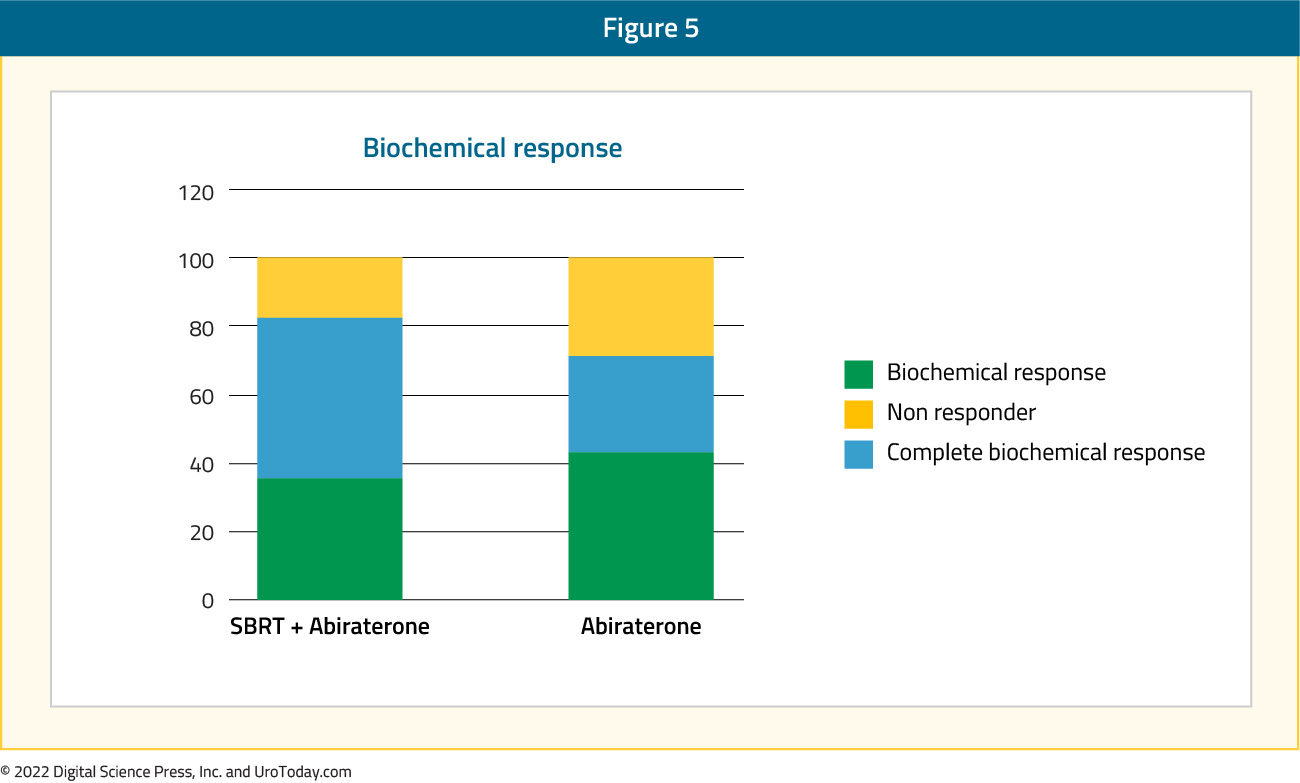 These data suggest a promising efficacy for the combination of SBRT and abiraterone acetate in patients with oligometastatic castrate-resistant disease. Ongoing follow-up of the entire cohort is expected soon, which may provide more power for statistical comparisons.

With improved next-generation imaging (ie. PSMA PET/CT), there is interest in the utility of treating PET-detected nodal only disease. Supiot et al. published the results of an open label phase II trial evaluating combined high-dose intensity-modulated radiotherapy and 60 months of androgen suppression in oligorecurrent (five or fewer) pelvic node relapses in previously treated prostate cancer patients, detected by fluorocholine PET/CT. The primary endpoint was 2-year progression-free survival defined as two consecutive prostate-specific antigen levels above the level at inclusion and/or clinical evidence of progression as per RECIST 1.1 and/or death from any cause. This trial included 67 patients from 15 centers with a median follow-up of 49.4 months. The two- and three-year progression-free survival rates were 81% and 58%, respectively. The median progression-free and biochemical relapse-free survival rates were 45.3 and 25.9 months, respectively. The two-year rates of Grade 2+ genitourinary and gastrointestinal toxicities were 10% and 2%, respectively.13 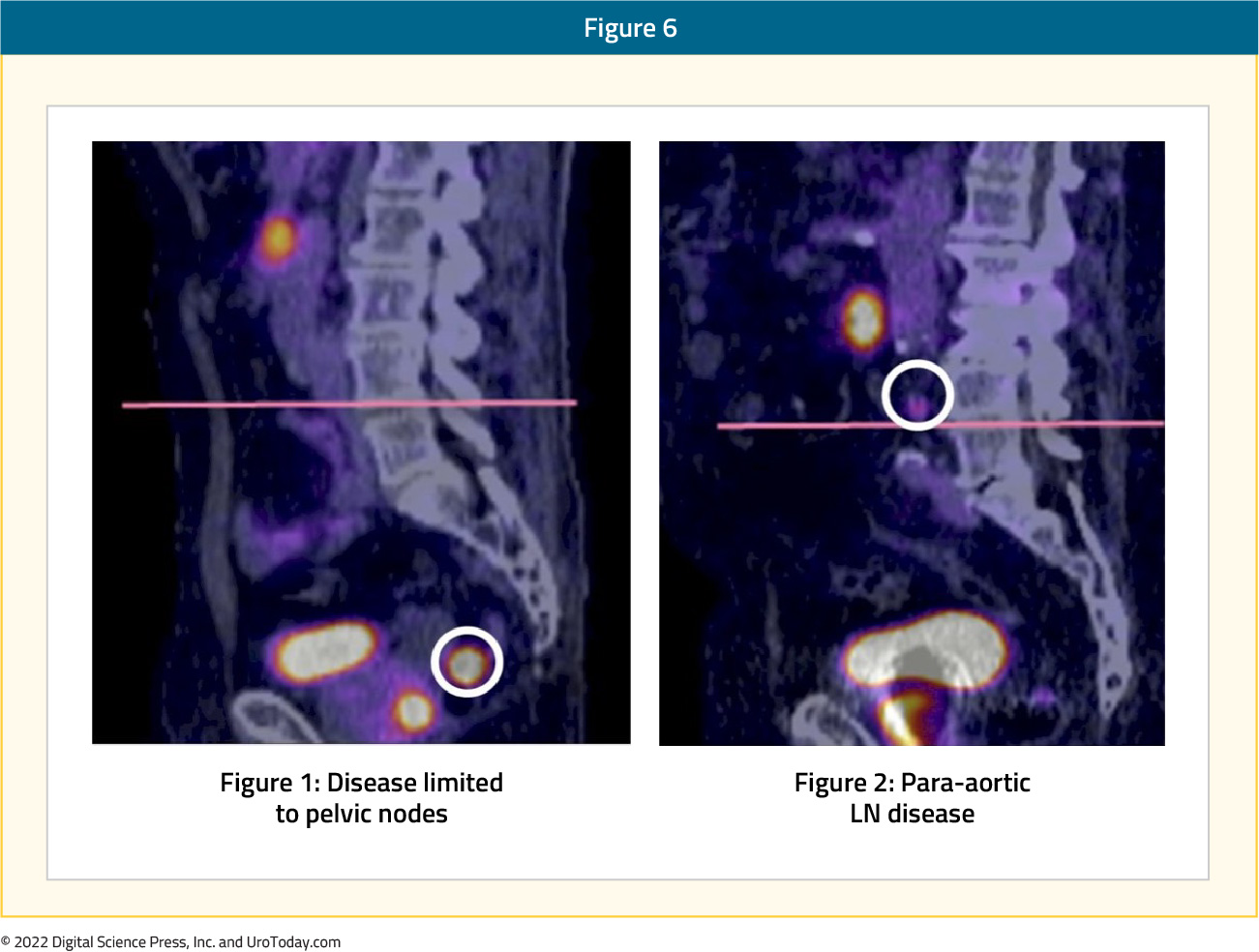 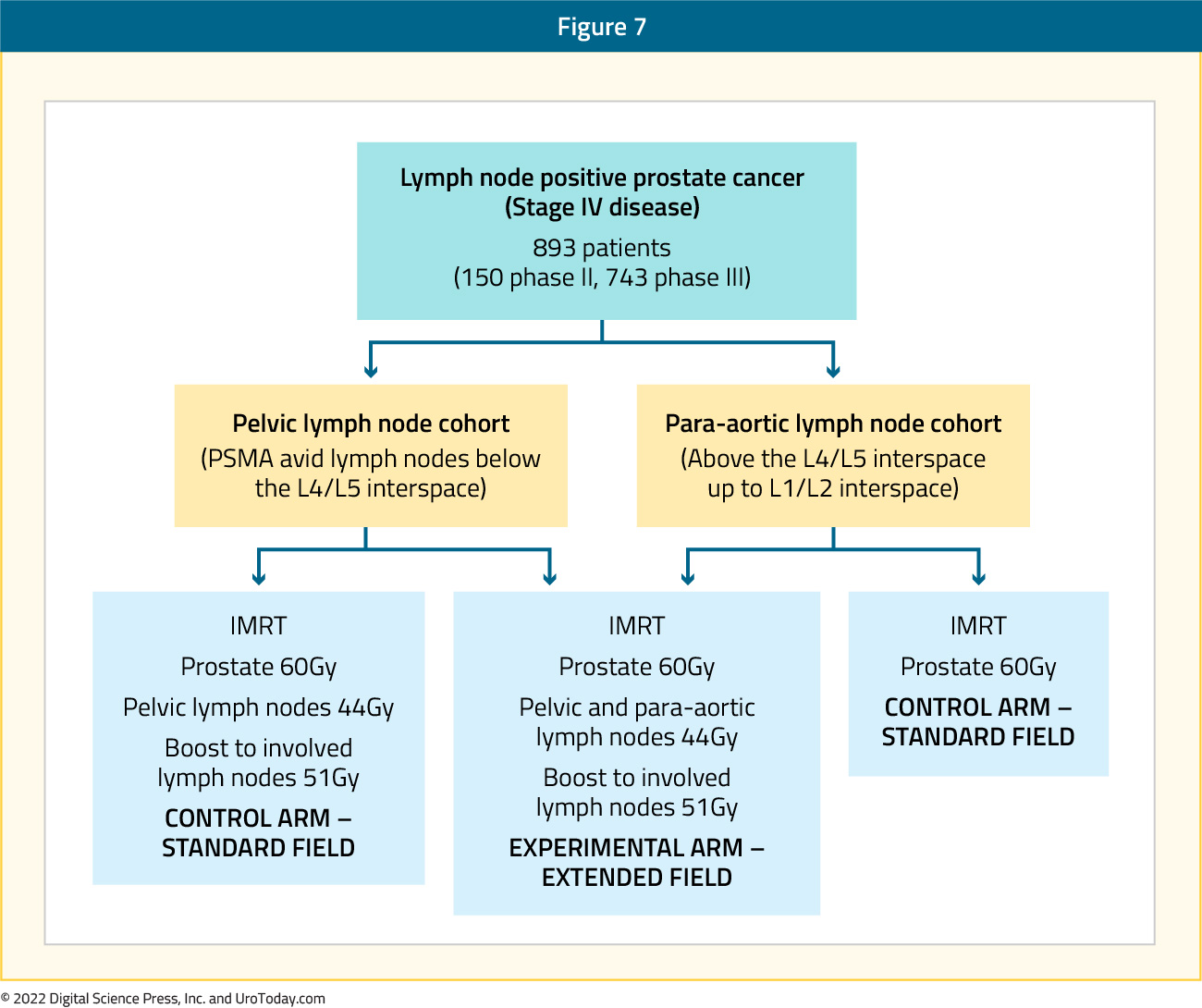 In phase II, the primary endpoint is lower gastrointestinal RTOG grade 2+ toxicity at week 18 from start of radiotherapy. Assuming acceptable toxicity in the first 75 participants receiving extended-field IMRT, the study will move to phase III where the primary endpoint is metastasis‐free survival. The trial aims to recruit 714 patients with pelvic lymph nodes to detect a hazard ratio of 0.62 in favor of extended-field IMRT and a further 179 patients with para‐aortic lymph nodes disease. The trial was launched in the UK on June 25, 2021, with the phase II portion of the trial being conducted in 20 NHS Trusts across the UK. As of the end of January 2022, 14 patients have been recruited and 4 centers are open.

Beyond its historically well recognized role in the treatment of localized and locally advanced prostate cancer, external beam radiotherapy has an increasingly important role in the treatment of men with metastatic disease. In those with a low volume of disease, both prostate directed radiotherapy and metastasis directed therapy are associated with meaningful clinical benefits. Ongoing work will better define the role of radiotherapy to sites of disease defined based on molecularly targeted imaging.