The treatment landscape of metastatic hormone sensitive prostate cancer (mHSPC) has evolved rapidly since the introduction of combination chemohormonal therapy with docetaxel and androgen deprivation therapy (ADT) in 2015.1 This includes a variety of treatment intensification strategies including both systemic therapy and local, prostate-directed radiotherapy. In addition to docetaxel, there are several U.S. Food and Drug Administration (FDA) approved agents in this disease space in combination with ADT:

ADT + Abiraterone/Prednisone: The LATITUDE trial and STAMPEDE arm G were the two landmark trials that assessed the role of abiraterone acetate and prednisone (AAP) in combination with ADT. Published concurrently, there was a significant improvement in overall survival for men randomized to receive AAP, with relative benefit of 37% in STAMPEDE (hazard ratio 0.63, 95% confidence interval 0.52 to 0.76)8 and 38% in LATITUDE (hazard ratio 0.62, 95% confidence interval 0.51 to 0.76).9 Similar to docetaxel + ADT, there is durability with AAP + ADT with recently published 5-year follow-up of the STAMPEDE data demonstrating a prolonged survival benefit for standard of care + AAP versus standard of care alone (HR 0.60, 95% CI 0.50-0.71).10 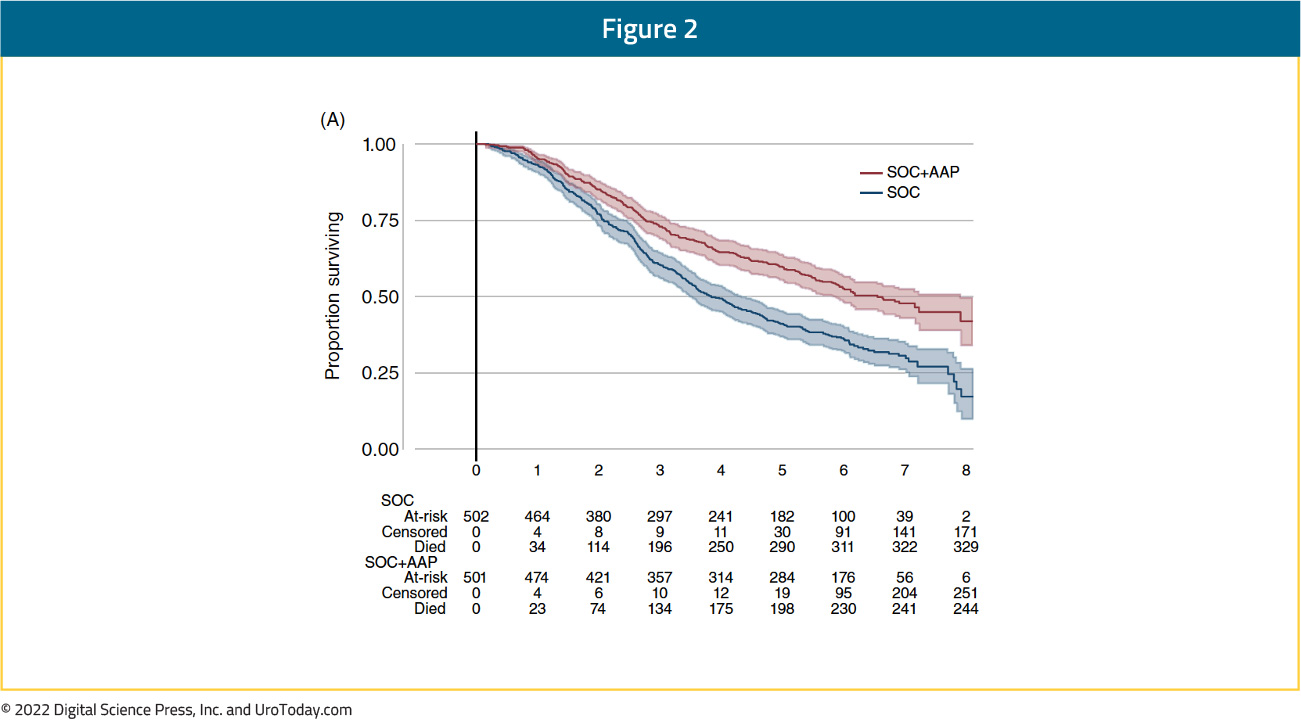 ADT + Apalutamide: The TITAN trial randomized patients with mHSPC to ADT + apalutamide or placebo. Notably, prior docetaxel usage was permitted (1.2% of study cohort). 81% of patients presented with de novo mHSPC and 62.7% of patients had CHAARTED high volume disease. The first reported outcomes of this trial demonstrated a significant benefit for ADT + apalutamide   (HR 0.67, 95% CI 0.51 to 0.89),11 and with longer follow-up (median follow-up of 44.0 months) an OS benefit with the addition of apalutamide (HR: 0.65, 95% CI 0.53 to 0.79) has been maintained, despite 39.5% of patients in the placebo arm crossing over to the treatment arm.12 Additionally, an ad hoc analysis of TITAN published in 2019 demonstrated that apalutamide addition maintains health related quality of life despite additional androgen blockade.13

ADT + Enzalutamide: In 2019, we saw the emergence of data for enzalutamide in patients with mHSPC. ENZAMET assessed OS as its primary outcome while ARCHES was powered to assess radiographic progression free survival (rPFS). In contrast to the aforementioned trials, ENZAMET utilized an active comparator (non-steroidal anti-androgen) and randomized men to enzalutamide or a standard first-generation anti-androgen in addition to ADT. Concurrent use of docetaxel was permitted at the discretion of the treating physician (16% had prior docetaxel and 45% with planned use of early docetaxel). The interim analysis after a median follow-up of 34 months showed a significant survival benefit in the enzalutamide group versus those receiving standard nonsteroidal anti-androgens (HR 0.67, 95% CI 0.52 to 0.86).14 Most recently at ASCO 2022, Dr. Ian Davis presented the most recent update of the ENZAMET trial. This was a prespecified analysis triggered to occur after 470 patient deaths (initial analysis was presented after 243 deaths). At a median follow up of 68 months, enzalutamide addition to testosterone suppression continued to demonstrate an OS benefit (median OS not reached [NR] versus 73.2 months; HR 0.70, 95% CI 0.58 to 0.84).

In the ARCHES trial, patients with predominately high-volume (63%) and de novo (66.7%) disease were randomized to enzalutamide + ADT or ADT alone. Notably, 17% of the cohort had previously received docetaxel.15 The most recent update of this trial was presented at ASCO GU 2022. Despite 31.3% of men initially randomized to receive placebo crossing over to open-label enzalutamide, the hazard ratio for OS in the overall cohort was 0.66 (95% CI 0.30 to 0.81).

ADT + SHR3680: At ASCO 2022, initial results of the randomized, open-label phase 3 CHART trial (NCT03520478) were presented. In this trial, mHSPC patients were randomized 1:1 to ADT plus either SHR3680 (240 mg/day), a novel oral androgen receptor inhibitor, or bicalutamide (50 mg/day). All patients had high-volume disease (according to CHAARTED criteria) and 90% had synchronous mHSPC. This trial was based in China and thus Chinese men accounted for 90% of the total study cohort. The primary endpoints were rPFS assessed by an independent review committee and OS.

ADT + TAK-700 (SWOG S1216): At ASCO 2021, results of the SWOG S1216 trial, a phase III randomized controlled trial comparing TAK-700 versus bicalutamide addition to ADT for patients with mHSPC, were presented. TAK-700 is an oral selective nonsteroidal 17, 20-lyase inhibitor that blocks the synthesis of gonadal and adrenal androgens, which has previously been assessed in mCRPC. The authors accrued patients with newly diagnosed mHSPC with a Zubrod performance status of 0-2 and a PSA of ≥ 2 ng/ml and randomized them in a 1:1 fashion to ADT + TAK-700 (300 mg twice daily) or ADT + bicalutamide (50 mg daily). The primary endpoint of the trial was OS with secondary endpoints including PFS, PSA at 7 months (≤0.2 vs 0.2 < PSA; ≤-4 vs. > 4 ng/ml) and adverse event profile.

The authors randomized 1,313 patients between March 2013 and July 2017. The median age of included patients was 68 years and 10% of subjects were Black. At enrollment, the median PSA was 30 ng/mL (range 2-6710) and 49% of patients had extensive disease. Approximately one-quarter of patients had previously received radical prostatectomy. Over a median follow-up of 4.9 years, median overall survival was longer among those who received ADT + TAK-700 (81.1 months) compared to ADT + bicalutamide (70.2 months), although this did not meet the pre-specified alpha threshold of 0.022 (HR 0.86, 95% CI 0.72 to 1.02). Subgroup analyses demonstrated consistent benefits to TAK-700 addition in both minimal and extensive disease patients. In contrast to the non-significant benefits in overall survival, improvements in PFS (median 47.6 months vs 23.0 months) were statistically significant (HR 0.58, 95% CI 0.51-0.67). Secondary endpoints favored the use of TAK-700, with PSA response rates significantly improved (58.3% vs 44.0% for PSA ≤0.2 ng/mL, p<0.0001) for men in this treatment arm. Of note, the median OS of 70.2 in the bicalutamide/ADT (control) arm of the SWOG S1216 trial was significantly longer when compared to that seen in the LATITUDE (34.7 months), STAMPEDE-docetaxel (43.1 months), CHAARTED (44 months), and STAMPEDE-abiraterone (46 months). Accordingly, the authors performed post hoc analyses according to the use of subsequent life-prolonging therapy. Among men randomized to TAK-700, 61.3% of patients received subsequent post-protocol life-prolonging therapy while rates were somewhat higher among those randomized to bicalutamide (77.4%).

ADT + Docetaxel + Abiraterone: Initially presented at ASCO 2021 and subsequently published in the Lancet in 2022,22 the PEACE-1 trial employed a 2x2 design to assess, (separately and combined) the impact of the addition of AAP and radiation therapy to standard of care therapy in men with de novo mHSPC. The control arm in this study evolved to reflect the contemporary standard of care. When the study began enrolling patients, the standard of care for first-line mHSPC was ADT alone. With publication of data from the STAMEDE and CHAARTED, standard of care was updated to include ADT plus docetaxel 75 mg/m2 every 3 weeks for 6 cycles. The two experimental treatments investigated in this study were:

1) AAP until disease progression or intolerance (concomitant to docetaxel)

2) RT of the prostate (74 Gy in 37 fractions after completion of docetaxel).

Similar results were observed for OS. In the overall study population (including both patients receiving radiation therapy and not receiving radiation therapy), the addition of AAP resulted in an 18% improvement in OS with median OS of 4.7 years on the standard of care arm and 5.7 years on the standard of care plus AAP arm (HR 0.82, 95.1% CI 0.69 to 0.98):

Notably, 81% of patients on the ADT plus docetaxel standard of care arm subsequently received a next generation hormonal therapy at the time of disease progression. This suggests that early intensification with the addition of AAP to SOC results in improvement in rPFS and OS compared to sequential therapy. In the cohort of patients who received ADT plus Docetaxel as standard of care, the addition of AAP was well-tolerated. There was no difference in rates of Grade 3-5 neutropenia or febrile neutropenia. As expected, Grade 3-5 liver function abnormalities (6% versus 1%) and hypertension (22% versus 13%) were higher in patients who received SOC plus AAP compared to standard of care alone.16

ADT + Docetaxel + Darolutamide: A year after the reporting of the PEACE-1 results, the ARASENS trial evaluating addition of darolutamide to standard of care therapy consisting of ADT + docetaxel was presented at ASCO GU 2022 and concurrently published in The New England Journal of Medicine.17 Darolutamide is a related, but structurally distinct, androgen receptor inhibitor with a favorable safety profile owing to limited blood-brain barrier penetrance and limited drug-drug toxicity. Darolutamide has demonstrated improved metastasis-free survival and OS in patients with nonmetastatic castration-resistant prostate cancer (CRPC) based on data from the ARAMIS trial, but had not yet been prospectively evaluated in the mHSPC first line setting.

The ARASENS trial is an international, double-blind, phase 3 study that enrolled patients with mHSPC and ECOG performance status 0 or 1 (NCT02799602). Once accrued, patients were randomized 1:1 to darolutamide 600 mg twice daily or matching placebo in addition to standard of care comprising ADT and docetaxel. This randomization was stratified by extent of disease per TNM staging (M1a vs M1b vs M1c) and alkaline phosphatase levels (< vs ≥ upper limit of normal). Notably, disease volume (per CHAARTED criteria) or risk group (by LATITUDE criteria) were not used for stratification. The primary endpoint was OS.

The authors randomized 1,306 patients between November 2016 to June 2018. There were 651 men allocated to receive darolutamide and 655 to placebo, in combination with ADT and docetaxel. Most patients (78%) had Gleason score 8 or greater at diagnosis and 85% were diagnosed with de novo metastatic disease. At the time of study screening, the median PSA was 30 ng/mL among those randomized to darolutamide and 24 ng/mL among those randomized to placebo. With a primary data cut-off of October 25, 2021, the authors observed a significant 32% decreased risk of death among patients treated with darolutamide compared to placebo (HR 0.68, 95% CI 0.57 to 0.80):

Prostate Radiotherapy in the Setting of mHSPC

Beyond systemic treatment intensification, local prostate-directed therapy may allow for intensification beyond ADT alone. While a surgical approach using radical prostatectomy has been described, high quality data are limited to radiotherapy. Of note, the SWOG 1802 trial is accruing patients with a surgical arm in the setting of mHSPC to further assess the impact of cytoreductive prostatectomy in this disease space.

In addition to the PEACE-1 trial that will assess local RT in a 2:2 factorial design in patients treated with standard of care + docetaxel + ADT with or without abiraterone, there are two trials to date that have evaluated the role of local radiotherapy to the prostate in patients with mHSPC.

STAMPEDE ARM H: STAMPEDE (Arm H) was an open label, randomized controlled phase III trial of 2,061 men at 117 hospitals across Switzerland and the UK. This arm randomized patients with de novo mHSPC in a 1:1 fashion to standard of care + radiotherapy or standard of care alone between January 2013 and September 2016. Standard of care was defined as lifelong ADT with upfront docetaxel permitted from December 2015 onwards. Men allocated to radiotherapy received either a daily (55 Gy in 20 fractions over 4 weeks) or weekly (36 Gy in six fractions over 6 weeks) schedule that was nominated before randomization. The primary outcome for this trial was OS. Subgroup analysis by metastatic volume (CHAARTED criteria) was planned a priori.

HORRAD: HORRAD was a multicenter prospective randomized clinical trial of 432 patients with previously untreated, de novo mHSPC at 28 centers across The Netherlands between November 2004 and September 2014. All eligible patients had a PSA >20 ng/ml and documented bone metastases on bone scan. Patients were randomized in a 1:1 fashion to either ADT with EBRT or ADT alone, with a primary endpoint was OS. The median PSA was 142 ng/mL and over a median follow up of 47 months, the median OS was non-significantly different at 45 months in the radiotherapy + ADT arm compared to 43 months in ADT alone arm (HR 0.90, 95% CI 0.70 to 1.14).19

The mHSPC landscape has drastically changed since 2015 when docetaxel + ADT became standard of care in this disease space. There are now multiple doublet therapies, recent level 1 data supporting triplet therapy, and the emergence of primary prostate radiotherapy (particularly those with low-metastatic volume disease) for these patients. Additional Center of Excellence articles in the mHSPC disease space will assess the impact on outcomes based on disease volume, timing of metastasis (de novo vs metachronous), metastasis directed therapy for low-volume disease, real-world utilization, and future considerations for mHSPC.