Prostate cancer, while commonly diagnosed early in the disease state, remains the second leading cause of cancer mortality in the United States and Europe1 . Of the 1.3 million new annual diagnoses of prostate cancer, 6% of men have metastases at the time of diagnosis. Such patients are defined as having de novo or synchronous metastatic hormone sensitive prostate cancer (mHSPC).

In addition to this de novo group, some men who are initially diagnosed with non-metastatic disease will have progression to metastasis prior to development of castration resistance, called metachronous mHSPC.2

The treatment landscape of mHSPC has evolved rapidly since the introduction of combination chemohormonal therapy with docetaxel and androgen deprivation therapy (ADT) in 2015 with the publication of the STAMPEDE3 and CHAARTED trials.4 Since then, there is level 1 evidence for five further combination treatment strategies with ADT in this disease space: abiraterone (STAMPEDE Arm G,5 LATITUDE),6 apalutamide (TITAN),7 enzalutamide (ENZAMET,8 ARCHES),9 abiraterone plus docetaxel (PEACE-1),10 and darolutamide plus docetaxel (ARASENS):11 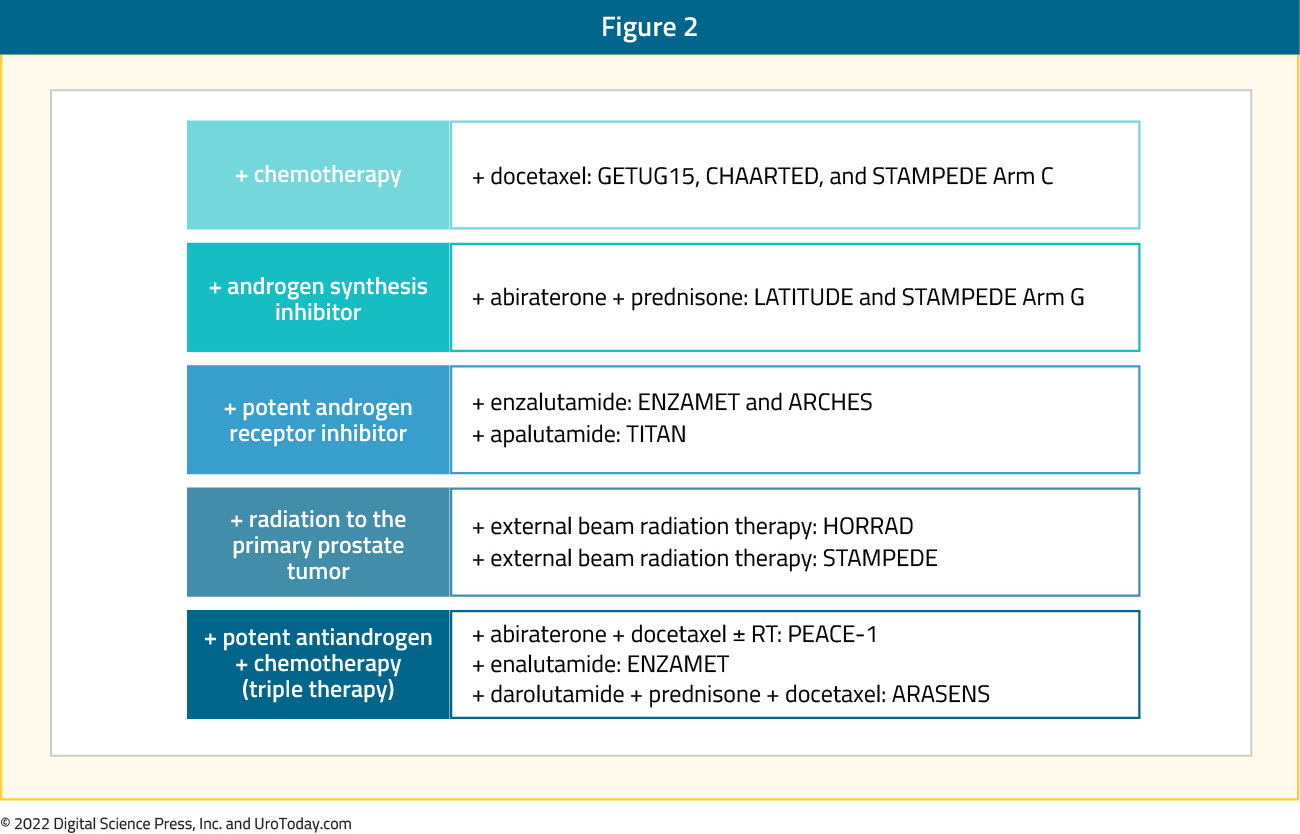 Based on the evidence from these transformative trials, clinical guidelines from ASCO,12 NCCN,13 EAU,14 and others currently recommend that novel hormonal therapy or chemotherapy be added to ADT as standard of care for patients with mHSPC. Despite the approval and availability of multiple mHSPC treatment intensification strategies, there remains a clear underutilization of these combination strategies in real-world practice. In this Center of Excellence article, we review the current state of treatment intensification utilization in real-world practice across multiple health care systems and evaluate existing barriers to improved adoption.

In 2021, Ryan et al. reported treatment utilization trends of mHSPC patients between January 2014 and July 2019 from two large U.S databases: (i) Optum’s de-identified Clinformatics Data Marta Database (COM/MA), which includes claims from commercial and Medicare Advantage plans for 13 million people across the United States and (ii) Centers for Medicare & Medicaid Services-sourced Medicare Fee-for-Service (FFS) Research Identifiable Files 100% Sample. A total of 19,841 mHSPC patients (6,517 COM/MA and 13,324 Medicare-FFS) were identified with a median follow up of 9.6 – 10.5 months. Notably, 38% of COM/MA and 48% of Medicare-FFS patients remained untreated or deferred treatment during the study period, whereas 45% and 46%, respectively, were treated with 1st line ADT monotherapy only. Abiraterone acetate or docetaxel was used as 1st line therapy in 13% (COM/MA) and 2%

(Medicare-FFS) of patients. Approximately 43% and 38% of patients, respectively, only received ADT monotherapy (with or without a first-generation androgen signaling inhibitors) during the entire mHSPC period despite the availability of other more potent therapies. It bears note that apalutamide and enzalutamide were added to evidence-based guidelines as mHSPC treatments after the end of the study period (July 31, 2019) and were not considered as mHSPC therapy in the current study. When stratified by year of index date, in the COM/MA database, treatment with 1st line ADT monotherapy decreased numerically from 48% to 43% among patients diagnosed with mHSPC in 2015 – 2017 versus 2018 – 2019. While the overall use of abiraterone or docetaxel remained similar in the two periods (12% - 14%), the relative use of abiraterone acetate increased among patients diagnosed in 2018 - 2019 (10%) vs 2015 - 2017 (5%), whereas the use of docetaxel decreased in 2018 - 2019 (4%) compared with 2015 – 2017 (7%):15 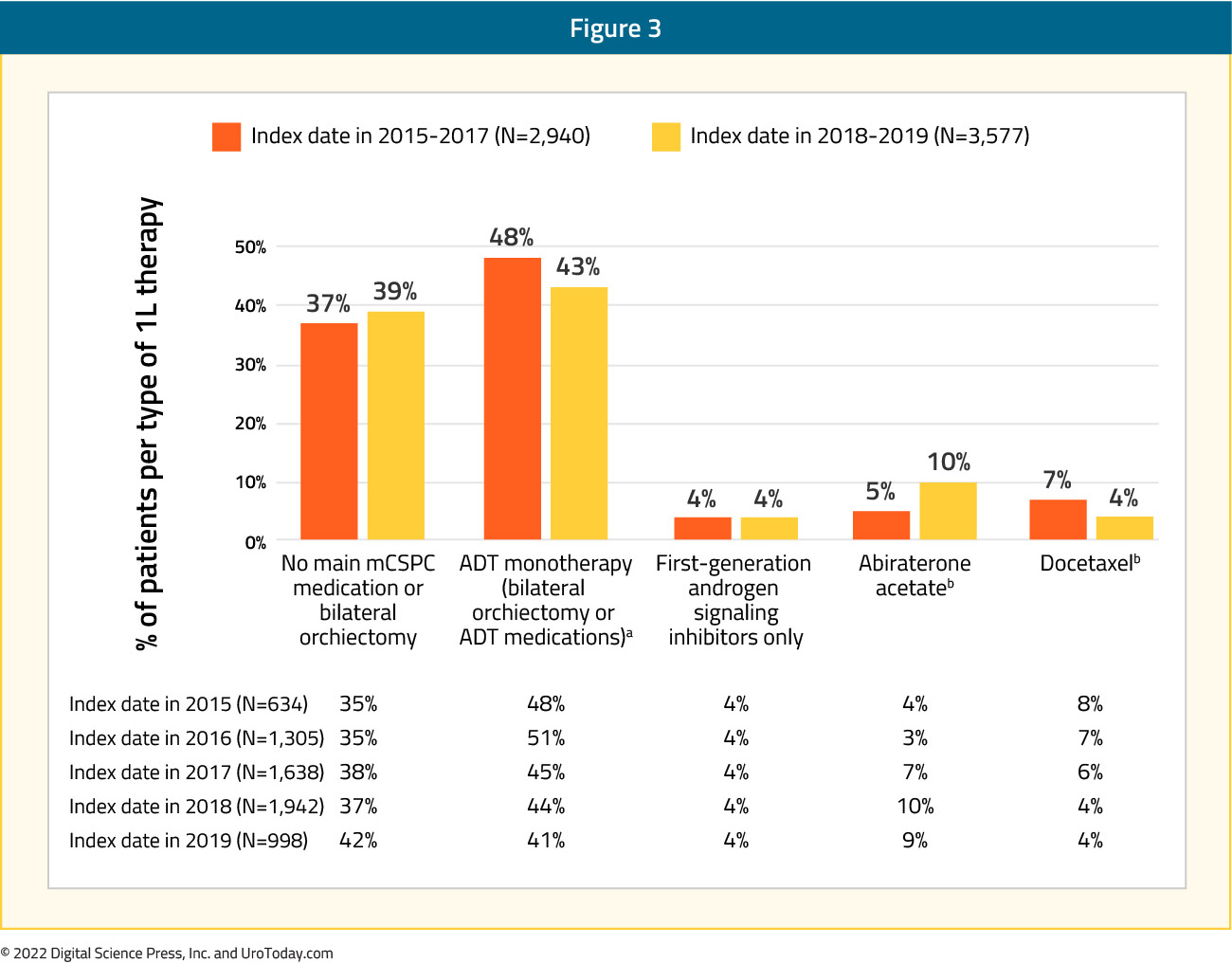 Analysis from the Veterans Health Administration (VHA) database was reported by Freedland et al. for 1,395 mHSPC patients treated between April 2013 and March 2018. Across the five-year study period, 63% of patients received ADT alone as 1st line treatment while ADT + non-steroidal anti-androgen was used in 24%, ADT + docetaxel was used in 8%, and ADT + abiraterone was used in the remaining 5%. Treatment trends over time did demonstrate an overall decrease in ADT only (66% to 60%) or ADT + non-steroidal anti-androgen (31% to 17%) utilization between 2014 and 2017-2018, with a corresponding increase in utilization of ADT+ docetaxel (3% to 9%) and ADT + abiraterone (1% to 15%). Nonetheless, despite increased adoption of treatment intensification in VHA mHSPC patients, there remains a clear underutilization of appropriate treatment intensification: 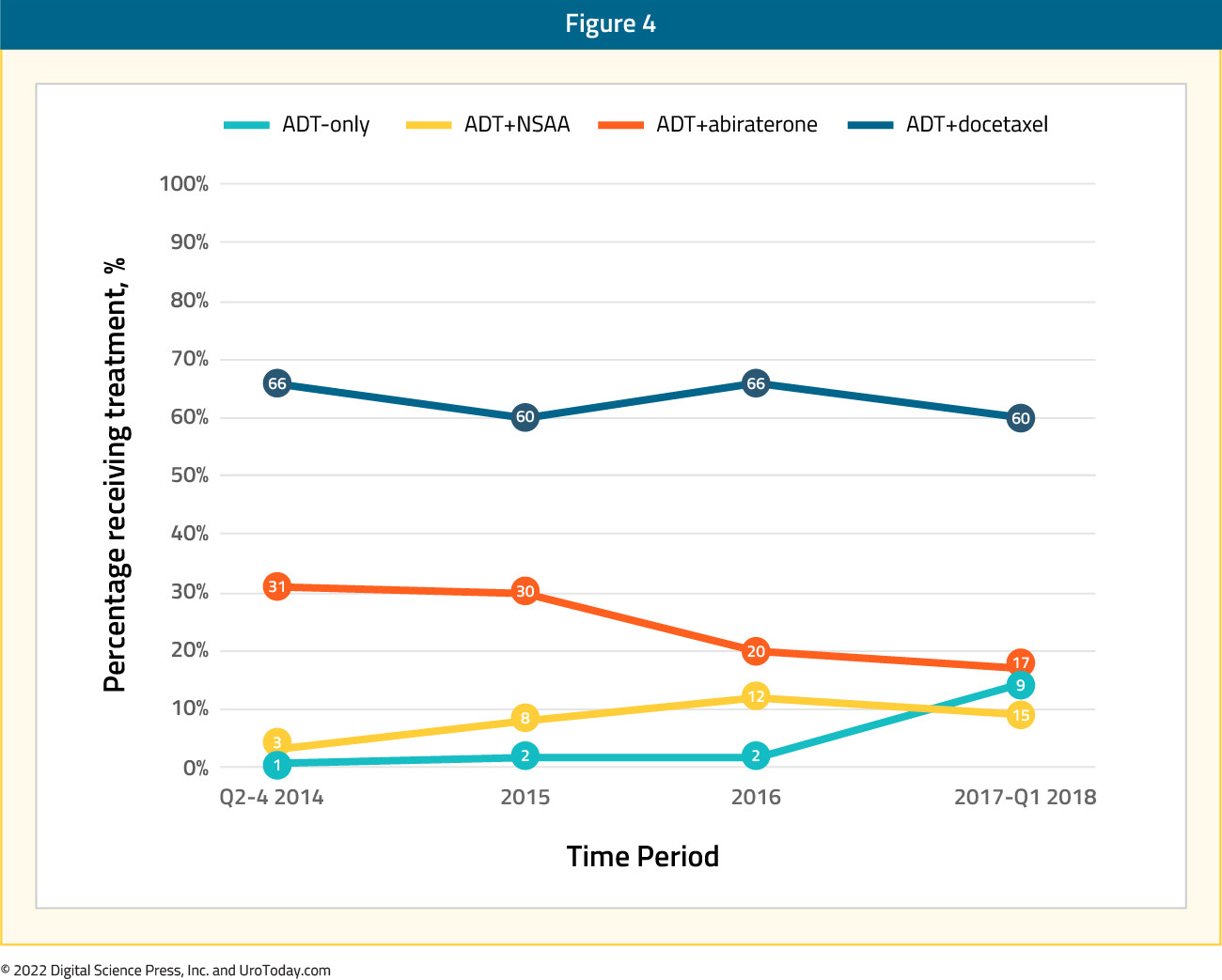 Comparison of patients in the four treatment groups demonstrated that patients receiving ADT and docetaxel, compared to the ADT only cohort, were younger (65.8 versus 73.4 years) and had fewer comorbidities (National Cancer Institute comorbidity score 1.1 versus 1.5), but had greater disease burden in terms of higher PSA (338.1 ng/ml versus 256.4 ng/ml) and overall metastatic burden. ADT + abiraterone patients were older (75.3 versus 73.4 years), generally had fewer cardiovascular comorbidities and lower PSA (238.3 versus 256.5 ng/ml), but had increased metastasis (other sites including bone: 80% versus 73%).16

Combined analysis from the VHA and Medicare was recently presented by George et al. at ESMO 20222. The authors identified 33,641 and 5,561 men in the Medicare and VA cohorts, respectively. Similar to the prior report by Freedland et al.,16 the authors demonstrated that the proportion of patients receiving treatment intensification with novel hormonal therapy or docetaxel increased over time, although by 2018/2019, still less than one third of patients with mHSPC received first line ADT plus docetaxel or ADT plus a novel hormonal agent: 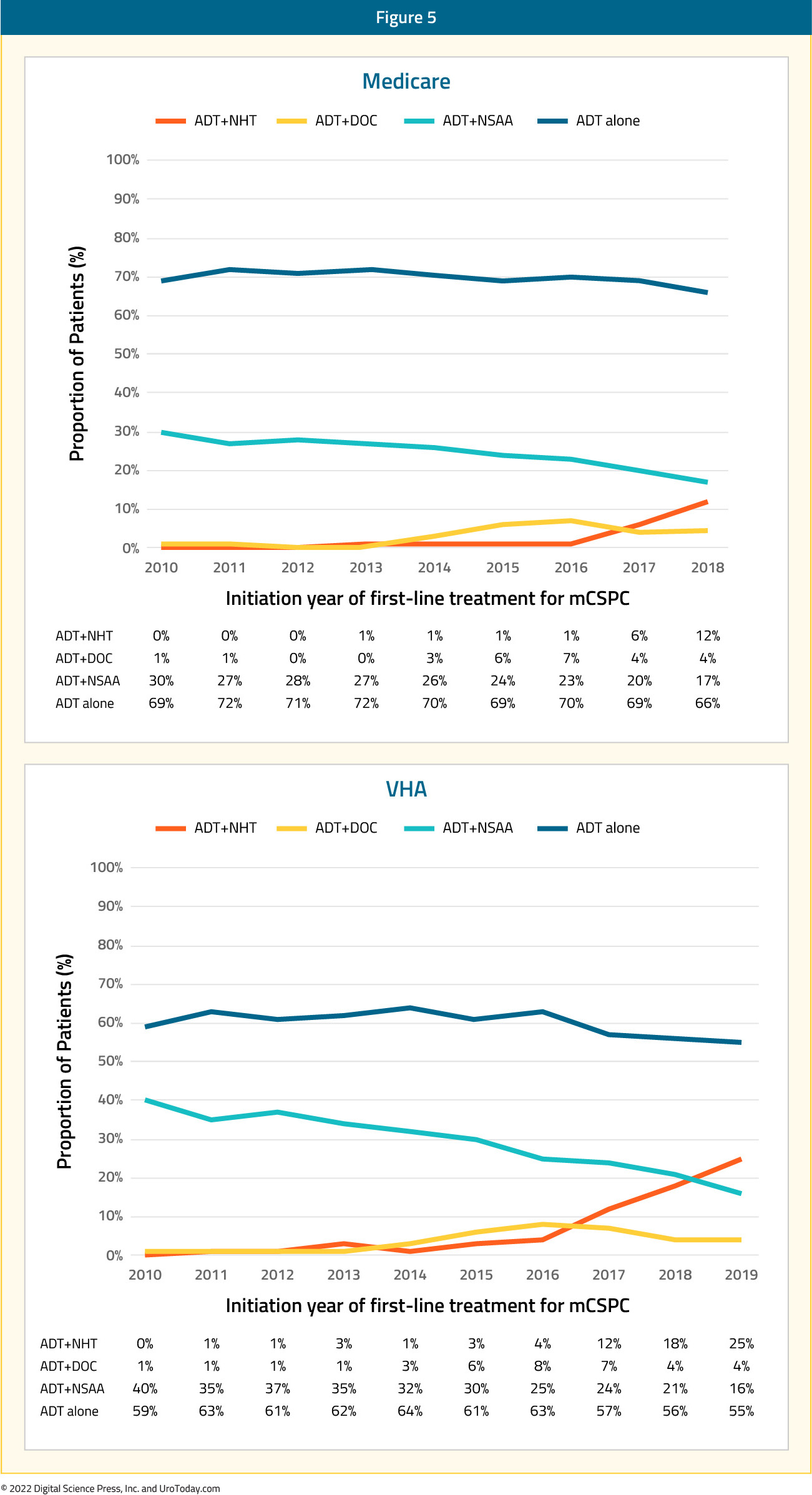 While there were changes in treatment approaches between 2010 and 2014, the authors did not find any changes in overall survival in 2012–2014 compared with 2010–2011, though there was improvement in overall survival by 12% and 15% in the Medicare and VA cohorts, respectively, in 2015–2018/2019 vs 2010–2011, after adjusting for baseline characteristics, suggesting that diffusion of these intensified treatment approaches provides a population-level survival benefit:

Figure 6. OS among patients with mCSPC 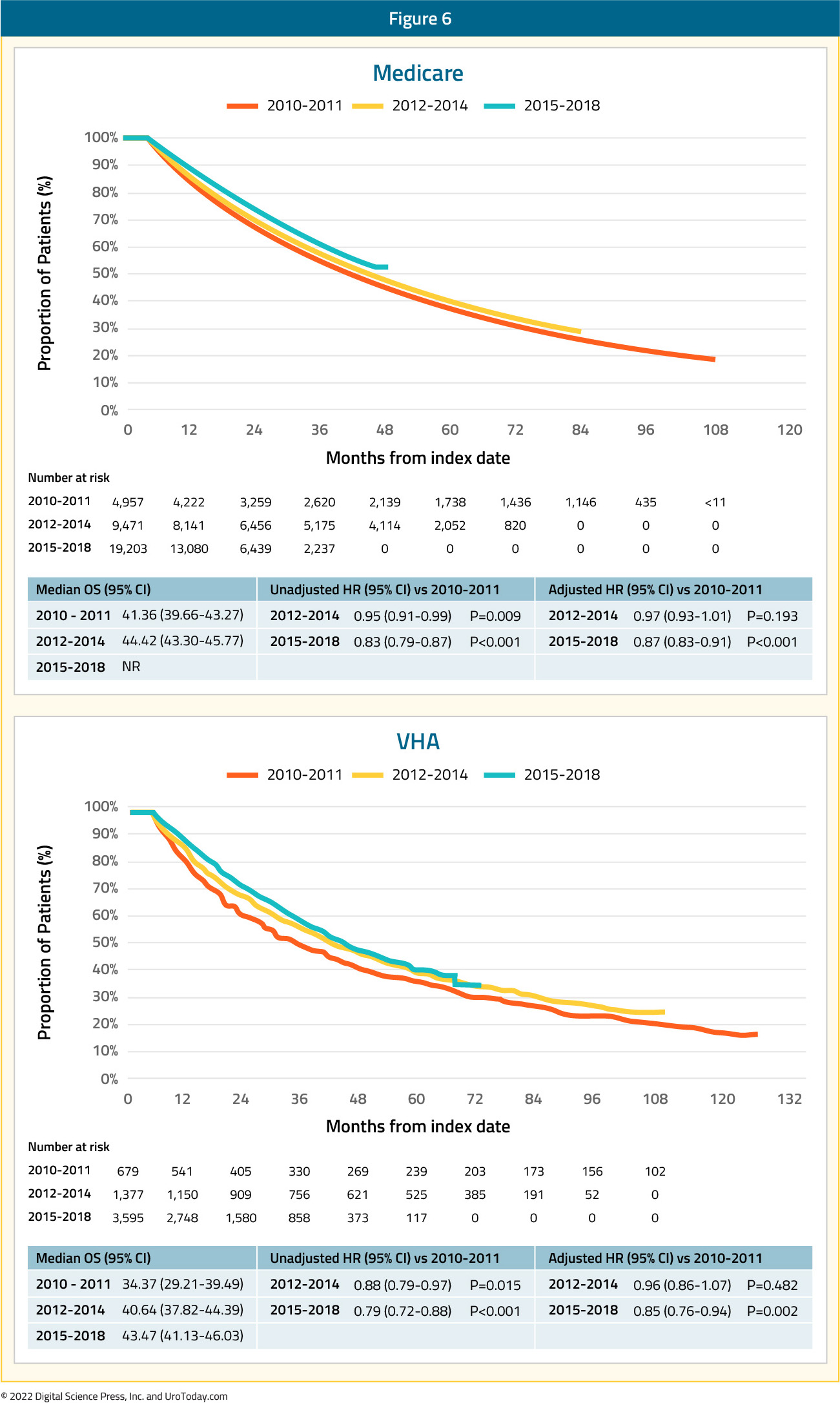 Combined Analysis from the United States, Europe, and Japan

It is important to assess whether real-world treatment patterns differ between countries. In 2022, Leith et al. published data from the Adelphi Prostate Cancer Disease Specific Programme (DSP), conducted in the United States, France, Germany, Italy, Spain, the United Kingdom, and Japan between January and August 2020. DSPs are large, point-in-time surveys of physicians and their patients presenting in a real-world clinical setting. Overall, 336 physicians participated in the survey: 58 from the US, 226 from Europe, and 52 from Japan. Globally, among 1,195 patients, ADT alone was still the most common mHSPC regimen initiated first (47.2%), followed by a novel hormonal agent at 30.7% (abiraterone: 20.7%, enzalutamide 8.2%, apalutamide 1.7%) and chemotherapy at 19.3% (mainly docetaxel at 18.5%). The highest rates of ADT only utilization was noted in Japan (78.4%) and Italy (66%), and conversely the lowest was in Spain (34%) and the United States (36%). There were significant differences in treatment patterns across the European countries. Novel hormonal therapy utilization was highest in Spain (38.2%), France (37.8%), and Germany (37.4%), whereas the highest utilization of docetaxel was in the United Kingdom (40.2%), which may reflect a geographic bias secondary to the publication of results from the STAMPEDE trial, based in the United Kingdom. Notably in the US, the most common mHSPC regimen initiated during the study period (January – August 2020) was a novel hormonal agent (41.2%), followed by ADT alone (36.3%), and chemotherapy (11.5%), which clearly reflects temporal changes in practice patterns compared to those seen in the aforementioned studies:17 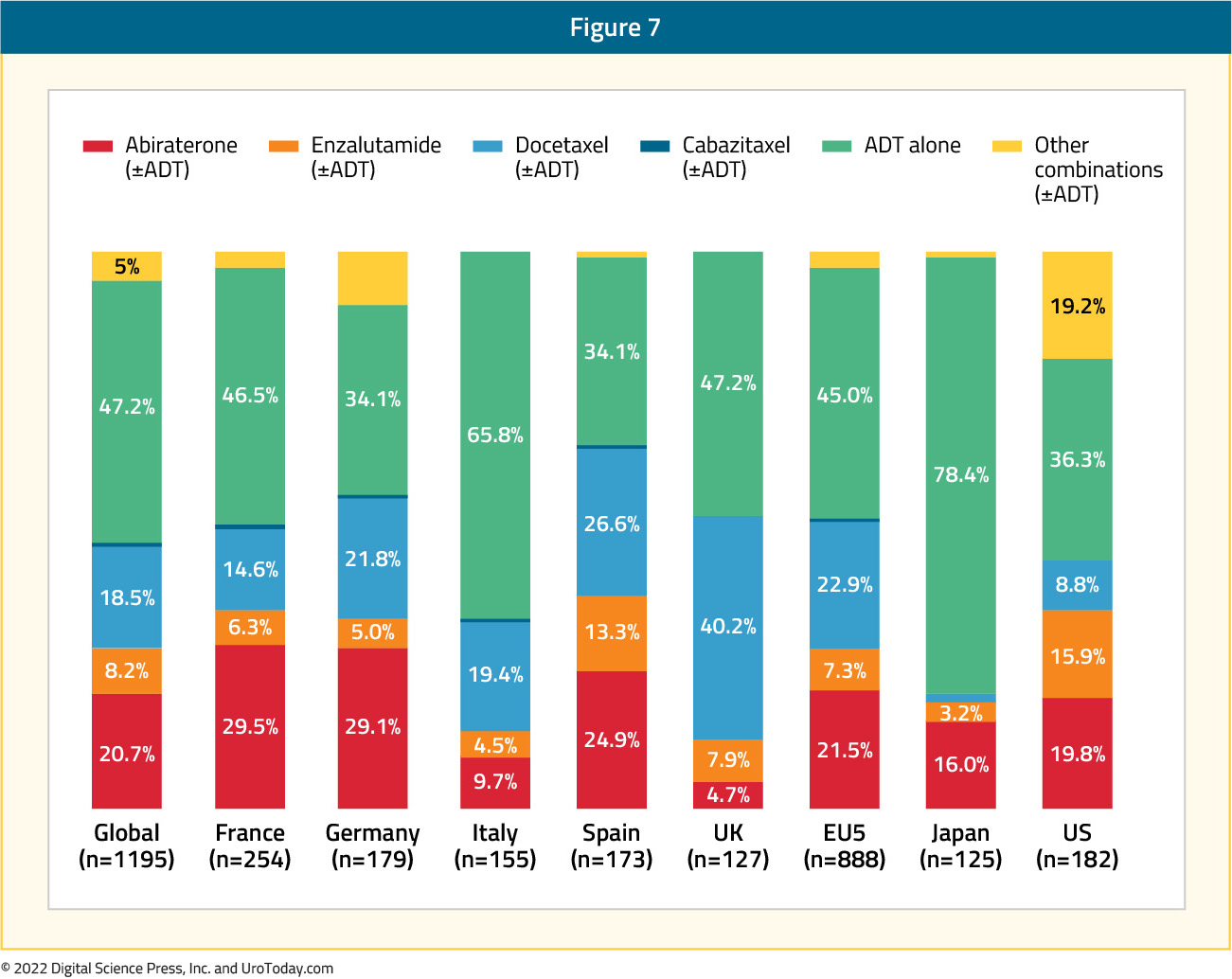 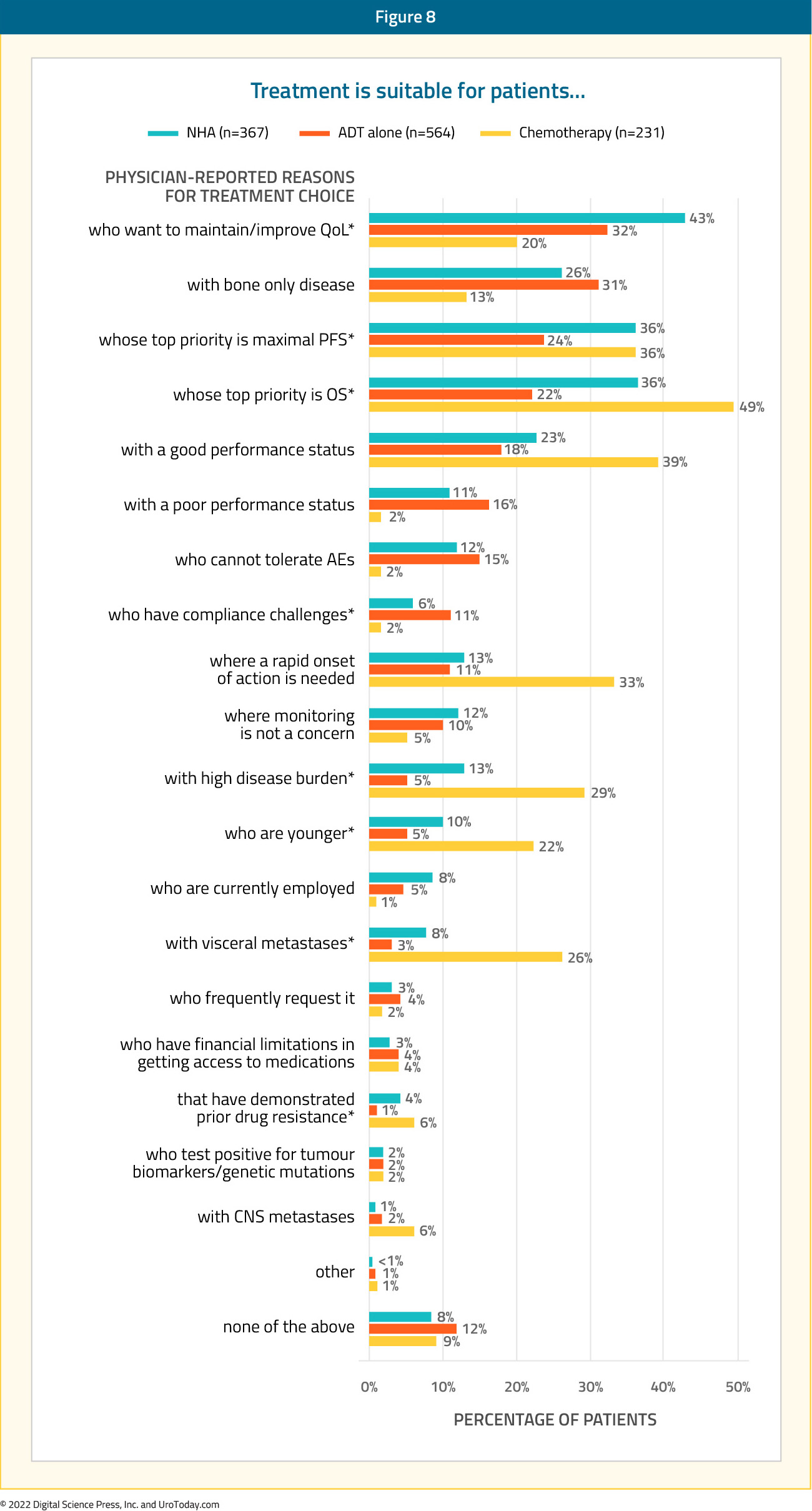 It also bears mentioning that, unlike the aforementioned studies which have assessed treatment utilization by examining administrative data records, this project relied upon physician responses to the survey. Thus, these data are less robust and subjective to both recall and, more importantly, social desirability bias.

Using provincial data from Ontario, Canada, Wallis et al. identified 3,556 patients diagnosed with de novo mHSPC between 2014 and 2019. Worrisomely, 78.6% of patients received ADT alone (with or without an anti-androgen), 11.2% received treatment intensification with docetaxel, 1.5% received abiraterone acetate and prednisone, with the remaining 8.7% receiving a “non-ADT” regimen. Patients receiving docetaxel were comparatively younger (mean age 72.6 years) and healthier (mean Charlson Comorbidity Index score of 0.15). The median PSA at diagnosis was lower among patients who received conventional ADT (88 ng/mL) compared with ADT intensification regimens (121 ng/mL and 152 ng/mL for the abiraterone and docetaxel cohorts, respectively). A time-stratified analysis representing the uptake of ADT intensification regimens before and after the pivotal 2017 LATITUDE trial, demonstrated that abiraterone acetate plus prednisone prescriptions increased from 0.5% to 3% in the pre- vs post-LATITUDE period, respectively, whereas docetaxel treatment dropped from 12% to 10%.18 As was reported by Ryan et al., these data suggest that the pivotal data from LATITUDE and STAMPEDE resulted in a substitution of intensification approach (from docetaxel to abiraterone) rather than a broadening of the patient population receiving treatment intensification.

What about real-world treatment intensification strategies in the second line setting? An analysis of the Flatiron database, a nationally representative real-world database from community practices and academic medical centers in the United States from 2011 onward, included 9,747 patients with mHSPC. There were 54.2% of patients treated with ADT only, while 15.5% were treated with additional abiraterone, 13.8% with docetaxel, and 8.3% with enzalutamide. 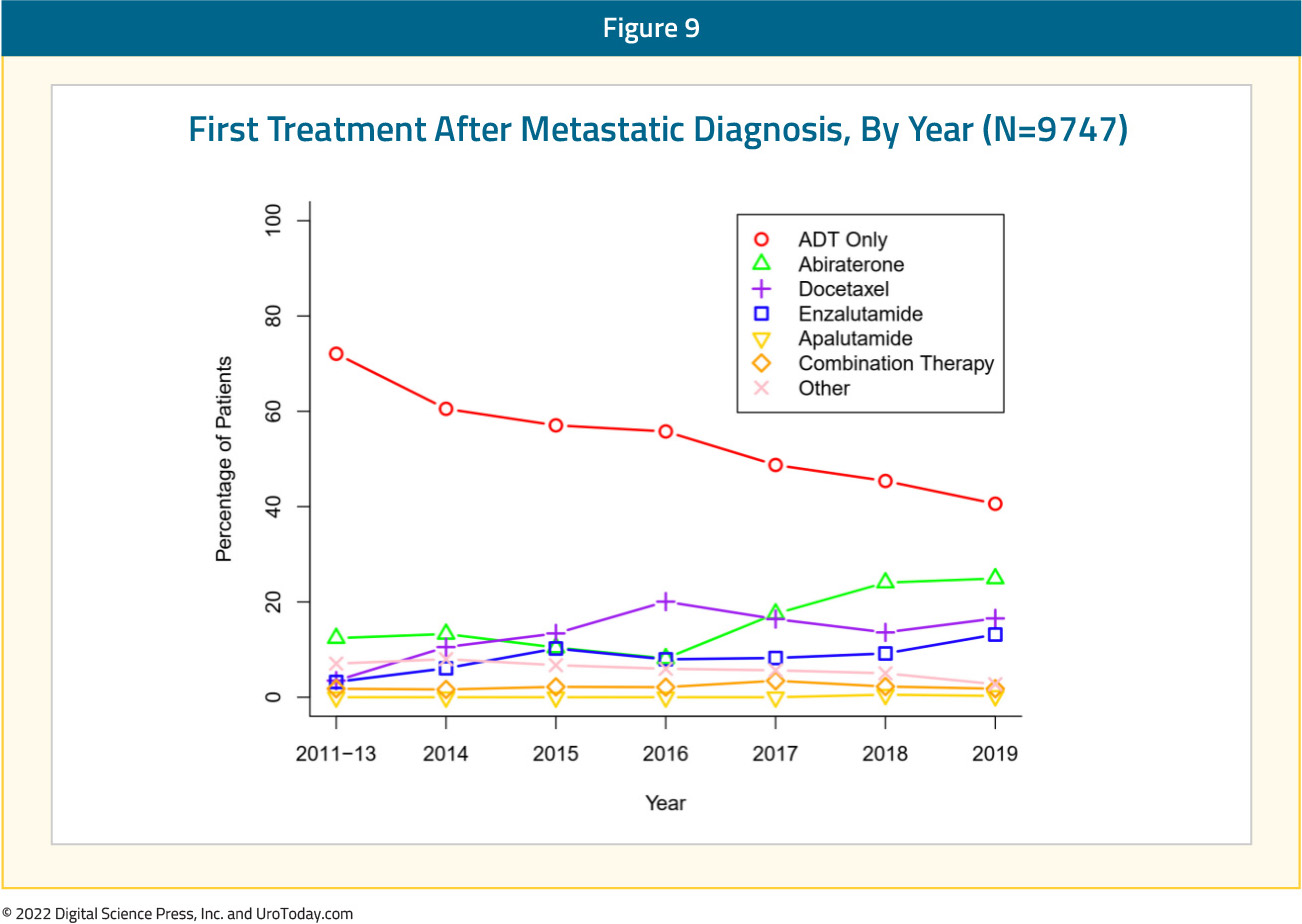 Interestingly, patients treated with the alternate novel hormonal agent (versus docetaxel) in the 2nd line setting had superior median time to 3rd line treatment or death:

Cox proportional hazards modeling adjusted using matching weights from the propensity score model for the overall population demonstrated consistent results in favor of a switch to the alternate novel hormonal agent in this setting. However, these results likely reflect an underlying selection bias, with patients with worse disease receiving docetaxel.

Barriers to Treatment Intensification in the Real-World Setting

Given the underwhelming utilization of treatment intensification for mHSPC patients in the real-world setting, barriers to improved adoption need to be further understood. Freedland et al. examined data from medical charts of patients initiating mHSPC treatment from July 2018 to November 2021 based on a retrospective review of multiple US academic/community practices. The authors surveyed oncologists and urologists who treated these patients to provide reasons for treatment choices including PSA goals and explicit reasons for not prescribing novel hormonal agents. This analysis included 621 patients who were treated by 65 oncologists and 42 urologists. 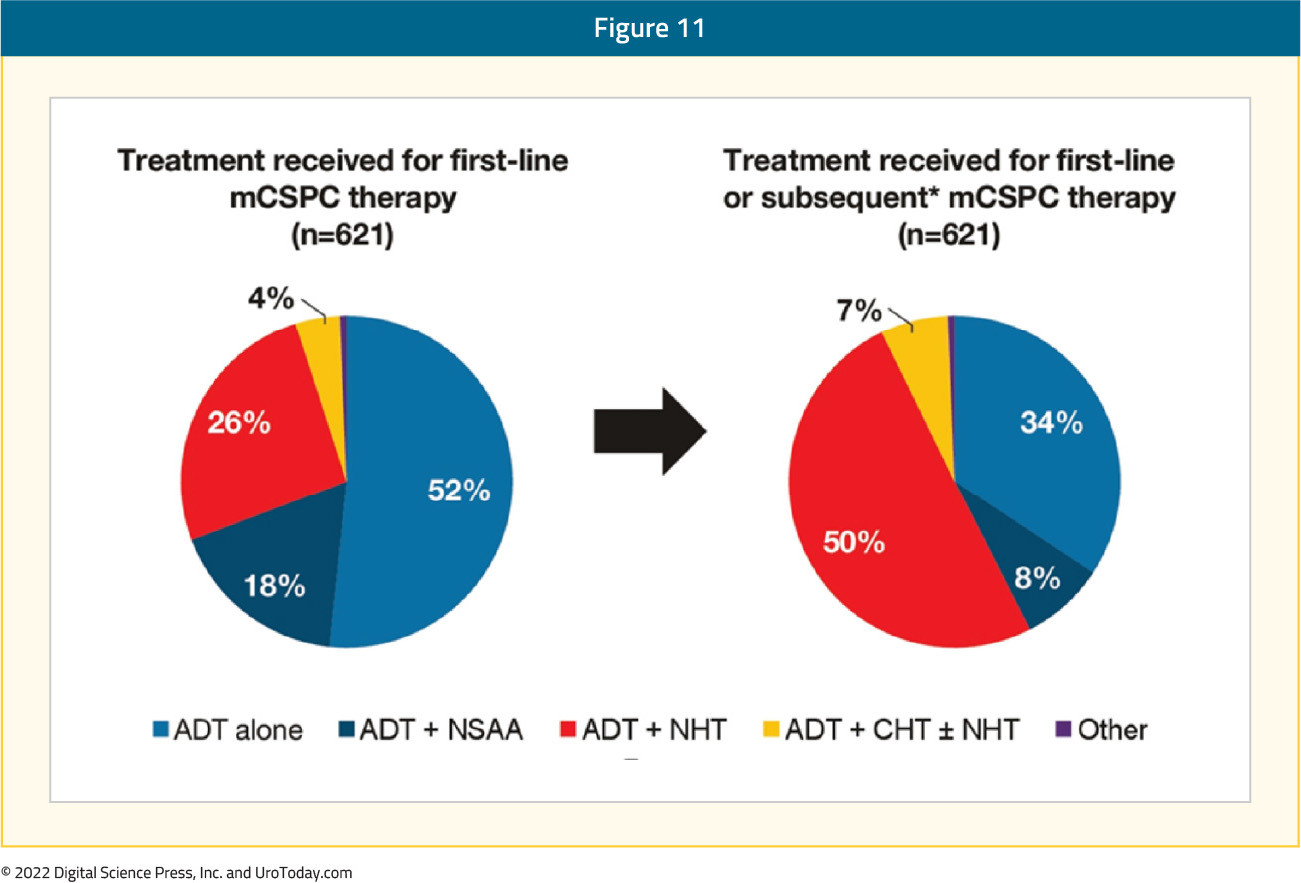 When the physicians were queried about reasons for not using novel hormonal agents, the most frequently cited reasons were: 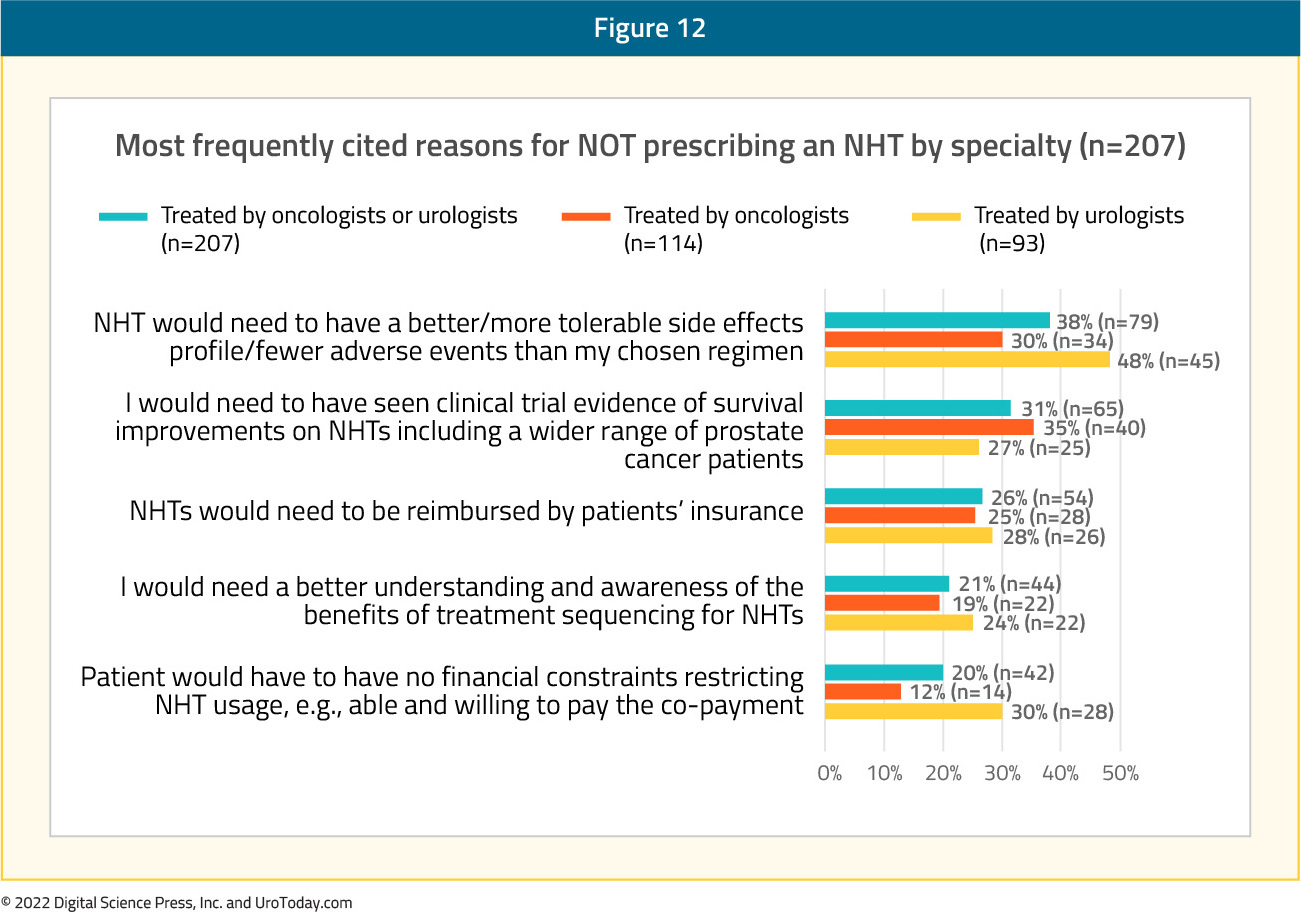 Regarding treatment goals for PSA response, physicians more frequently reported a relative (%) reduction than an absolute PSA reduction (85% vs 51%). Oncologists considered a median PSA reduction of 50% (IQR 25-75%) adequate versus 75% (IQR 50-90%) among urologists. Urologists were more likely to utilize treatment intensification in the first line setting or subsequently in patients who were still castration-sensitive (p < 0.01). Further, perhaps not surprisingly, physicians who aimed for deeper PSA reductions of 75-100% were more likely (OR: 1.63; p = 0.034) to provide treatment intensification in the first-line setting compared with physicians with less aggressive PSA goals (0-49%): 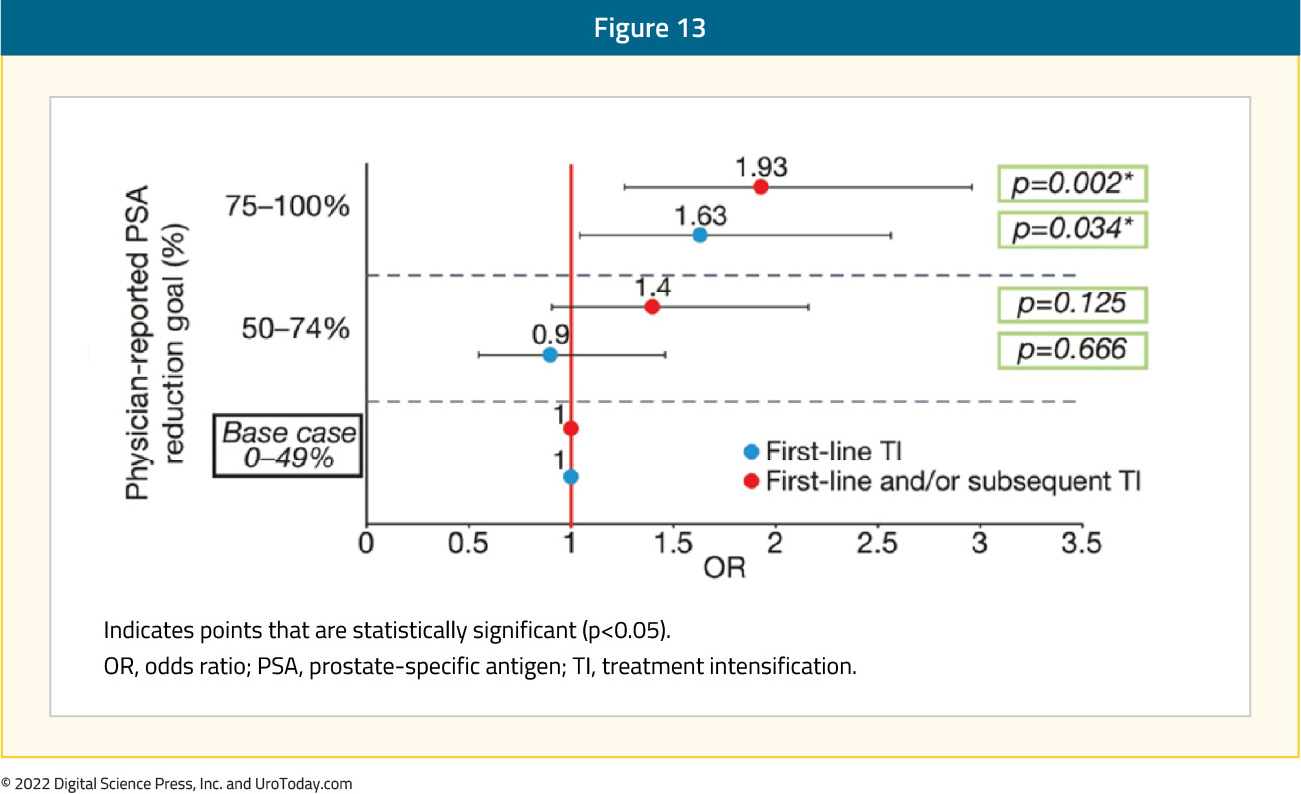 The authors concluded that physician survey results suggest that perceptions of tolerability and lack of efficacy and financial considerations affect novel hormonal therapy use. Further, in practice, non-guideline driven PSA reduction goals are associated with low rates of treatment intensification. These results clearly demonstrate the need for further medical education.

Although there appears to be increasing utilization of treatment intensification in the real-world setting, less than half of mHSPC patients receive guideline concordant care. While there may be altruistic reasons to avoid treatment intensification secondary to concerns for patient financial toxicity or concerns for the tolerability of these agents, the proven survival benefit conferred by this treatment paradigm should make this approach the clear standard of care. Deviations from this approach should be infrequent and driven by a fully informed shared decision making process. Responses to date regarding reasons for not intensifying treatment suggest that may physicians lack of understanding of pivotal trials supporting these agents. As the mHSPC disease space moves to 1st line triplet therapy in appropriately selected patients, future efforts aimed at bridging the gap between evidence for treatment intensification (doublet and triplet therapy) from transformative clinical trials and real-world practice are desperately needed.