Bladder cancer is the most common malignancy of the urinary tract and second only to the prostate in the entire genitourinary system. The most updated available global estimate, based on registry data collected through the year 2012, found approximately 430,000 new diagnoses worldwide, making it the 9th most common malignancy overall (6th in men and 17th in women) while being the 13th leading cause of cancer mortality (Figure 1).1 A more recent estimate available for the United States population based on Surveillance, Epidemiology, and End Results (SEER) data estimates the annual incidence will be 81,000 for the year 2018 corresponding to the 4th and 11th most common cancer among men and women, respectively.2 In the decade between 2006 and 2015 the annual incidence of bladder cancer per 100,000 persons has declined by 1.3% annually, however, the mortality rate has remained nearly unchanged.3 By comparison, the mortality rates of the other top malignancies, lung, colon, and prostate, have declined by 2.6%, 2.4%, and 2.9% over the same period of time, respectively. 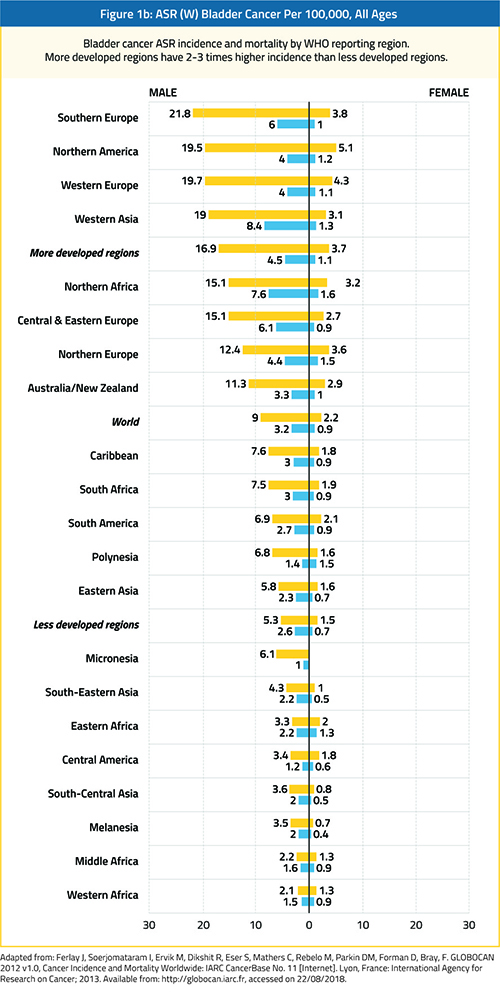 Figure 1.  Age-standardized rates (ASR) of incidence (gold) and mortality (blue) from the World Health Organization International Agency for Research on Cancer GLOBOCAN 2012 dataset. (A) Worldwide ASR for the top 20 cancers, divided by sex. Bladder cancer incidence is the 6th most common among men and 17th among women. (B) Bladder cancer ASR incidence and mortality by WHO reporting region. More developed regions have 2-3 times higher incidence than less developed regions.


The gender disparity in bladder cancer risk is readily evident considering men represent slightly more than 75% of new diagnoses each year.2 Perhaps the most obvious explanation for this difference is the inequality in exposure to bladder carcinogens, namely tobacco smoke. This topic has undergone close examination but higher rates of smoking and tobacco use among males fails to entirely account for the increased bladder cancer risk.4,5 Sex hormones may play a key role in the development and progression of bladder cancer, with increased androgen receptor expression noted in lower stage/grade tumors while higher stage disease is associated with increased expression of the estrogen receptor β isoform (Figure 2).6-9 This may point to an explanation for the poorer stage-adjusted cancer-specific mortality in women compared to men (HR 1.17-4.47) in spite of a male to female incidence ratio of 4 to 1.10-14 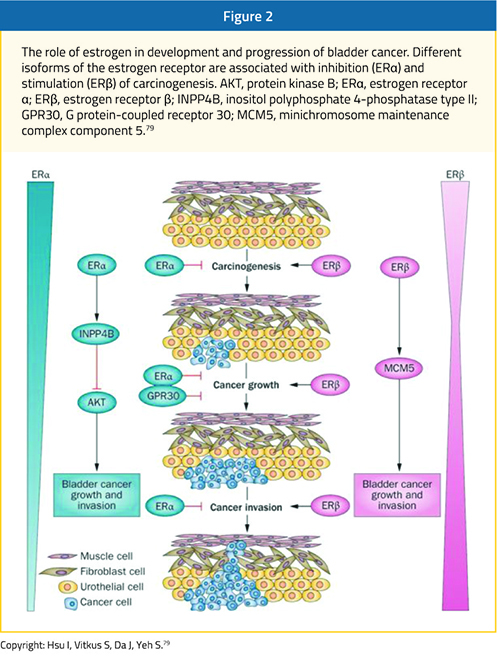 Internationally, gender differences in bladder cancer mirrors the trends seen in the US population but incidences vary widely from region to region. For instance, the lowest age-standardized rates (ASR) in men are seen in Africa (Uganda ASR = 2.6 per 100,000) while the highest are found in North America (ASR = 19.5 per 100,000) and Europe (ASR = 17.7 per 100,000), including Spain with its ASR of 36.7 per 100,000 men.1 In an analysis of the WHO cancer databases, Antoni et al. made several notable observations regarding worldwide bladder cancer incidence and mortality.15 The ASR of more developed regions is approximately 3-times higher than the developing world and is likely explained by the high prevalence of cigarette smoking among the former population during the preceding three to four decades. Case-in-point, nearly 2 in 3 Spanish adult males actively smoked in the late 1970s, and while smoking rates have certainly declined among the developed world, it will take many more years to see the attendant decline in the disease burden of bladder cancer.15-17 Egypt – and the Northern African region as a whole – are worth highlighting given the abnormally high incidence when compared to the continent overall (ASR = 19.0, 15.1, and 6.3 per 100,000, respectively).15 Endemic parasitic infection with Schistoma haematobium has traditionally been associated with the increased prevalence of disease among the Egyptian population, especially squamous cell carcinoma (SCC) which accounted for up to 81% of all bladder cancers diagnosed before the turn of the century.18 More recently, bilharzial infection rates have fallen and SCC now accounts for less than 30% of bladder cancer pathology, but the overall incidence is holding steady due to smoking rates among the male population that has increased to over 50%.18,19

Racial disparity among the US population is skewed towards a 2-fold higher incidence of bladder cancer among Caucasian men, however, tumor stage and grade are higher at the presentation in African American men.20 Several researchers have noted worse disease-specific outcomes for African Americans and hypothesize that this is probably due to socioeconomic factors and poor access to healthcare, but a recent evaluation of a Florida cancer registry actually found significantly better overall survival among blacks (HR=0.35, p=0.045) when controlling for patient and disease factors.21-25

The urothelium is exposed to the outside environment, not unlike the skin or the lung epithelium, making it susceptible to damage from environmental toxins. Once filtered by the kidney and concentrated in the urine, these toxins remain in continuous contact with the urothelium of the bladder until expelled during urination. The result is DNA damage caused by several carcinogenic compounds (aromatic amines, polycyclic aromatic hydrocarbons, etc.) which leads to accumulation of oncogenic mutations over the course of decades and explains why bladder cancer carries one of the highest mutational burdens of all cancers.26,27

The most strongly attributable risk factor for bladder cancer is cigarette smoking, which causes approximate 50% of cases annually across both sexes.28 Since the overall rate of smoking in the US has dropped in the past several decades, one would expect to see a commensurate decline in the incidence of bladder cancer, but this has not been the case. Instead, it appears that the strength of association between bladder cancer and smoking has increased, likely due to the enrichment of carcinogenic agents found in cigarette tobacco over time – specifically nitrates, which become metabolized into carcinogenic N-nitrosamines.28,29

E-cigarettes are a popular “safe” alternative to cigarette smoking, but the vaporized liquid, comprised of nicotine and flavoring, contains several carcinogenic compounds found in tobacco smoke, such as polycyclic aromatic hydrocarbons, phenols, nitrosamines, and aldehydes, among others.30 It is too early to make a causal link between e-cigarettes and bladder cancer, however, studies have discovered, while less than cigarette smokers, levels of carcinogenic metabolites in the urine of e-cigarette smokers are significantly higher than non-smoking controls.31,32 Furthermore, pre-clinical work with mouse models demonstrated DNA damage induced by nitrosamines from e-cigarettes in the murine lungs, heart, and bladder.33


Other environmental toxins, aside from tobacco smoke, that are known to cause bladder cancer are often found in industrial settings where workers are subjected to repeated daily exposure. In a contemporary analysis of bladder cancer risk from occupational exposures, workers in tobacco, dye, rubber, printing, leather, and hairdressing industries as well as chimney sweeps, firefighters, aluminum workers, and oil workers were at highest risk for bladder cancer secondary to environmental presence of aromatic amines and polycyclic aromatic hydrocarbons (Table).26,34-37 The inorganic form of arsenic found both naturally and as a contaminant in the environment, has been strongly linked to urothelial malignancy, especially when the concentration in drinking water is over 150-300 µg/L.38,39 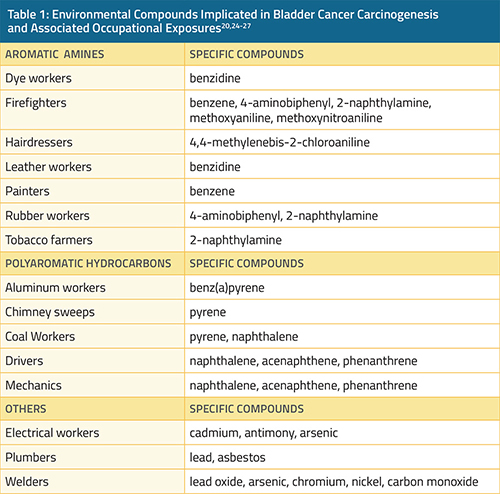 Innumerable dietary risk factors have been associated with cancer risk in general and even a few with particular emphasis on bladder cancer.40 Meat consumption at the population level appears to be positively correlated with bladder cancer risk for both red meat and processed meats, but the quality of evidence is generally poor.41,42 Likewise, artificial sweeteners are a frequent suspect for dietary carcinogenesis while lacking any clear link to cancer of the urinary tract, only conflicting results from case-control studies.43-45

The most commonly cited hereditary links to bladder cancer are not tumor suppressor or proto-oncogene mutations, but rather related to the manner in which an individual metabolizes the carcinogens from the environment, especially in the form of cigarette smoke. Two isoforms of the N-acetyltransferase enzyme (NAT1 and NAT2) that are responsible for inactivating the carcinogenic aromatic and heterocyclic amine compounds can be associated with an increased risk of developing bladder cancer when certain germline polymorphisms are present that correlate with “slow” enzyme activity.46,47 Enzymes in the glutathione S-transferase (GST) family also carry a detoxifying function, and bladder cancer risk is increased in the GSTM1-null genotype, however, the effect in this population is more pronounced among never smokers over former or current smokers through an as of yet unknown mechanism.48,49

Chronic inflammation contributes to bladder cancer formation through a process by which immune cells (neutrophils, monocytes, and macrophages) generate reactive oxygen species that induce DNA damage as well as stimulate cellular proliferation through cell-signaling pathways. 50 Urinary tract infections and urothelial irritants, such as calculi and indwelling catheters, are associated with increased risk of bladder cancer overall, as well as an increased proportion of squamous cell carcinoma.51,52 This is particularly evident among spinal cord injury patients and populations with endemic Schistosomiasis, and though the exact mechanism is unknown, urothelial to squamous metaplasia appears to precede the development of invasive carcinoma in these patients.50,53

Iatrogenic causes of bladder cancer include systemic agents (i.e. chemotherapy) and pelvic irradiation for other malignancies. The popular class of anti-diabetic medications known as thiazolidinediones (TZD), which includes the specific drugs pioglitazone and rosiglitazone, have been implicated in urothelial carcinoma carcinogenesis via activation of the peroxisome proliferator-activated receptors gamma (PPARγ). Large cohort studies have reported conflicting results regarding an increased incidence of bladder cancer that increases with duration of TZD therapy, especially pioglitazone, prompting the FDA to include a warning label regarding the increased risk and recommend ongoing re-evaluation of the data.54-58 Bladder cancer risk is also associated with systemic cyclophosphamide chemotherapy, due to either direct effect of toxic metabolites in the urine (acrolein and phosphoramide) or severe urothelial inflammation.59,60 Radiotherapy of the pelvis may lead to at least 30% increased risk, though this effect is seen only with the external beam but not brachytherapy.61

Given the role of inflammation in carcinogenesis, it makes sense that inhibiting enzymes within the pro-inflammatory pathways (i.e. cyclooxygenase-2 [COX-2] or 3-hydroxy-3-mehylglutaryl-coenzyme A [HMGCoA] reductase) might be useful for disease prevention. Laboratory models of nonsteroidal anti-inflammatories (NSAIDs) have demonstrated promising results related to bladder cancer prevention, however, a randomized controlled trial of the COX-2 inhibitor celecoxib failed significantly reduce NMIBC recurrences in humans.62-64 Likewise, results from case-control studies suggest that HMGCoA reductase inhibitors do not offer a significant benefit.65,66

Smoking cessation, on the other hand, can help to erase some of the tobacco-associated bladder cancer risks, especially when the user quits prior to disease onset. The risk of developing bladder cancer in former smokers decreases with time since quitting but they still maintain a higher risk when compared to never smokers, though, this is approximately 50% less than that of current smokers.37,67-69 Smoking status remains important even after bladder cancer has developed, as former smokers who quit at least 1 year prior to bladder cancer diagnosis appear to have a lower recurrence risk when compared to more recent former smokers and current smokers, but some studies have only found a difference for patients who quit more than 10 years before.70,71

Cannabis may possess antineoplastic properties based on inhibition of tumor growth and pro-apoptotic effects seen in the laboratory, but supporting clinical data is currently lacking.72-74  A slightly higher incidence of bladder cancer was noted in non-smokers (neither tobacco nor cannabis) when compared to cannabis users (0.4% v. 0.3%, respectively) in one large cohort study, translating into a relative risk of 0.55 (p=0.048) on multivariate analysis, though only age, race, and BMI were used as co-variables.75 Conversely, a much smaller case-control study of Vietnam-era veterans found increased rates of habitual marijuana use among bladder cancer patients (88.5%) when compared to matched controls (69.2%), though tobacco use was equal among both groups.76

Proposed dietary factors offering a protective effect include increased fluid intake, fruits, vegetables, vitamin supplements (A, C, & D), selenium, and other antioxidants.67 Randomized controlled trials are lacking in this arena and systematic reviews of retrospective, case-control studies have yielded mixed results, so no definitive conclusions can be drawn at this time.40,77,78