The patient underwent a digital rectal examination demonstrating a T3 disease, with a total PSA of 8 ng/ml, and a prostatic health index of 62. The patient also underwent a 1.5 Tesla multiparametric MRI in another institution, which demonstrated a PIRADS 5 lesion with evidence of left seminal vesicle involvement in T2-weighted sequences with concomitant restricted diffusion at the ADC map. Furthermore, there was evidence of enlarged lymph nodes at the T1sequence, at the right obturator (12 mm) and right external iliac (14 mm). The patient went on to have a transrectal targeted and systematic biopsy which revealed 10/15 cores positive for Gleason 7 (4+3) disease. His bone scan was negative,and his CT scan revealed two suspicious lymph nodes at the right obturator, measuring 12 mm, and a right external iliac node measuring 14 mm. The patient underwent robotic radical prostatectomy with extended pelvic lymph node dissection in June 2015. The pathology demonstrated a pT3b disease, with a Gleason score of 8 (4+4), 38 nodes removed and four positive nodes, two on the right obturator and two on the right external iliac area. Surgical margins demonstrated 1 mm positive base margin (Gleason pattern 4). The final pathology was pT3b Gleason 4+4, R1pN1.

One month following surgery, the first PSA was undetectable, the patient required one pad per day for mild incontinence, and erectile dysfunction was present.

Dr. Morris began his talk stating that the prognosis and cancer-specific survival of patients with positive surgical margins, and even 3-4 positive nodes are objectively not as bad as originally thought. They have an eight-year cancer-specific survival of 78.8% for high-risk patients with 3-4 positive lymph nodes (figure 1) when treated with ADT and radiotherapy. It is possible to give focused radiotherapy to all required areas, without affecting the nearby organs, and achieve good results (Figure 2).

Figure 2 - Focused radiotherapy to all required areas in patients with positive nodes after surgery: 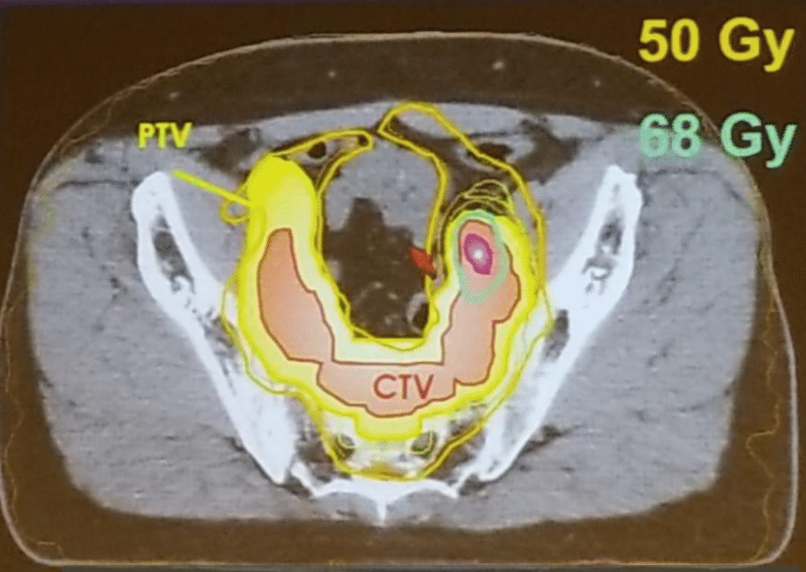 Dr. Morris continued and stated that there are only sparse data to inform us of the “best practice” in this arena. Therefore, there is a need to extrapolate, assume and derive. Most medical oncologists would use ADT + radiotherapy or ADT or abiraterone with radiotherapy. ADT alone is probably not a valid choice anymore in this scenario. More data are needed to make a final decision in these cases, including treatment paradigms using contemporary regimens, genomic profiling, and precision imaging.