The patient underwent a digital rectal examination demonstrating a T3 disease, with a total PSA of 8 ng/ml, and a prostatic health index of 62. The patient also underwent a 1.5 Tesla multiparametric MRI in another institution, which demonstrated a PIRADS 5 lesion with evidence of left seminal vesicle involvement in T2- weighted sequences with concomitant restricted diffusion at the ADC map. Furthermore, there was evidence of enlarged lymph nodes at the T1 sequence, at the right obturator (12 mm) and right external iliac (14 mm). The patient went on to have a transrectal targeted and systematic biopsy which revealed 10/15 cores positive for Gleason 7 (4+3) disease. His bone scan was negative, and his CT scan revealed two suspicious lymph nodes at the right obturator, measuring 12 mm, and a right external iliac node measuring 14 mm. Various treatment options were presented at this time, including radical prostatectomy, external beam radiotherapy + androgen deprivation therapy (ADT), or systemic therapies.

Dr. Koontz discussed the role of external beam radiation therapy (EBRT) in positive node disease. Several trials have shown a benefit to EBRT + ADT over EBRT alone in patients with positive node disease1.  There are currently ongoing phase three trials of EBRT in locally advanced prostate cancer in node-negative and node-positive disease. A large population-based study from the NCDB database demonstrated a benefit in patients with positive node disease, who were treated with ADT and local therapy compared to those treated with ADT alone2. (Figure 1). Of the patients treated with local therapy, 38% underwent surgery, and 62% received EBRT. The 5-year overall survival rate was 73% for EBRT+ADT compared to 49% for ADT alone. 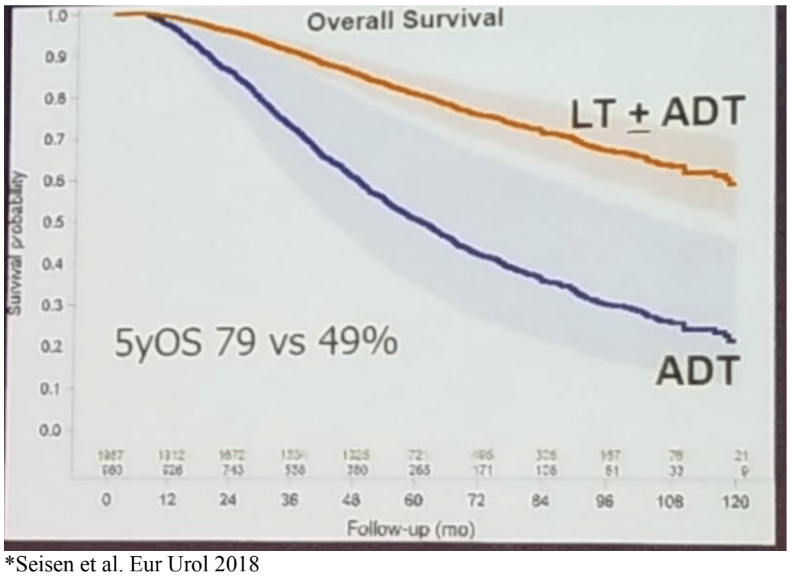 The toxicity has been shown to below with whole pelvis intensity-modulated radiation therapy (IMRT). However, if it is performed following surgery, the risk of chronic incontinence increases. Dr. Koontz provocatively stated that either surgical or EBRT is reasonable after radical prostatectomy with adverse outcomes. However, if EBRT+ADT is one of the primary definitive therapy options, and is also a good option after surgerywith adverse results, Dr. Koontz provocatively asked why surgery is required at all?