This website uses cookies to ensure you get the best experience on our website. Privacy Policy
As highlighted in prior articles on the Etiology and Epidemiology of Kidney Cancer, cancers of the kidney and renal pelvis comprise the 6th most common newly diagnosed tumors in men and 10th most common in women1 and account for an estimated 65,340 people new diagnoses and 14,970 cancer-related deaths in 2018 in the United States. Despite a previously mentioned stage migration due to an increase in incidental detection, a large proportion (up to 35%) of patients present with advanced disease, including metastases.2 Historically, metastatic RCC has been early uniformly fatal, with 10-year survival rates less than 5%.3

As emphasized in the article on Malignant Renal Tumors, clear cell renal cell carcinoma (ccRCC) is the most common histologic subtype of renal cell carcinoma (RCC). Likely due to its much higher prevalence, the vast majority of systemic therapies for RCC have been investigated among patients with ccRCC. Historically, treatment for metastatic RCC (mRCC) had been limited to cytokine therapies (interleukin-2 and interferon-alfa). However, the development of tyrosine kinase inhibitors (TKIs), which target vascular endothelial growth factors (VEGF), and mammalian target of rapamycin (mTOR) inhibitors have replaced cytokine-based therapies as the standard of care. More recently, immunotherapy-based approaches using checkpoint inhibitors have demonstrated significant benefits and have joined the repertoire of available agents for patients with metastatic RCC.

The host immune system has long been implicated with RCC tumor biology. As a result, modulators of the immune system were among the first therapeutic targets for advanced ccRCC.

Interferon-α was one of the first cytokines assessed for the treatment of metastatic ccRCC. Interferons have a range of biologic functions, including immunomodulation. Early data demonstrated response rates in the range of 10 to 15% for patients treated with interferon-α.4 Compared with other available systemic therapies available at the time, interferon therapy conferred a survival benefit.5

An alternative form of immunologic modulation was examined using interleukin-2. While response rates were similar to interferon-based therapies (~15 to 20%)6, interleukin-2 was distinct in that durable complete responses were observed in approximately 7 to 9% of patients.7 On the basis of these data, high-dose IL-2 was approved by the U.S. Food and Drug Administration (FDA) in 1992. However, IL-2 is associated with considerable toxicity which has limited its widespread utilization. Most worrisome is vascular leak syndrome which leads to intravascular depletion, hypovolemia, respiratory compromise and multi-organ failure. Alternatives to the high-dose intravenous bolus administration were explored but lead to worse oncologic outcomes. Thus, high-dose IL-2 is the only recommended approach for patients undergoing cytokine therapy.

Subsequently, combinations of interferon and interleukin therapies were explored. These demonstrated some improvement in response rate but no difference in overall survival.8 Combination therapy resulted in significantly increased toxicity compared to monotherapy with either agent.

With the introduction of VEGF and mTOR targeting agents, interferon is no longer utilized as first-line therapy. However, IL-2 remains an available, though not widely utilized, option on the basis of its ability to induce durable complete responses which these new agents lack.

Inhibitors of the VEGF Pathway for Advanced ccRCC

Based on work into the molecular biology underlying ccRCC led to “rational targeted therapeutics” including targeting of the VEGF pathway.

The first inhibitor of the VEGF pathway used in clinical trials was bevacizumab, a humanized monoclonal antibody against VEGF-A. While this approach was first explored in patients who had progressed on cytokine-based therapies, it was soon evaluated head-to-head against interferon in previously untreated patients.9,10 The addition of bevacizumab to interferon resulted in significant improvements in response rate and progression-free survival. Today, bevacizumab is uncommonly used as monotherapy in untreated patients but is considered as second-line therapy in patients who have failed prior therapy with tyrosine kinase inhibitors.

Tyrosine-kinase inhibitors also target the VEGF pathway, through inhibition of a combination of VEGFR-2, PDGFR-Î², raf-1 c-Kit, and Flt3 (sunitinib and sorafenib). In 2006, sorafenib was shown to have biologic activity in ccRCC. Subsequent studies demonstrated improvements in progression-free survival compared with placebo in patients who have previously failed cytokine therapy and improvements in tumor regression compared to interferon in previously untreated patients. Despite FDA approval, sorafenib is rarely used as first-line therapy today. More widely used is sunitinib. As with agents discussed, sunitinib was first evaluated among patients who had previously received cytokine treatment. Subsequently, it was compared to interferon-Î± in a large phase III randomized trial.11 While the initial analysis demonstrated significant improvement in progression-free survival and overall response rate, subsequent follow-up has demonstrated a strong trend towards improved overall survival. On account of these data, sunitinib is widely used as first-line treatment of RCC.

Tyrosine-kinase inhibitors exhibit a class-based toxicity profile including gastrointestinal events, dermatologic complications including hand-foot desquamation, hypertension, and general malaise. However, quality of life appears to be better with these agents than with interferon.11

Subsequently, a number of more targeted tyrosine kinase inhibitors have been developed with the goal to decrease the toxicity of this treatment strategy. Such agents include pazopanib, axitinib, and tivozanib. Comparative data of pazopanib and sunitinib have demonstrated non-inferior oncologic outcomes with decreased toxicity among patients receiving pazopanib.12 Axitinib was evaluated as second-line therapy compared to sorafenib among patients who had previously received sunitinib, bevacizumab, temsirolimus, or cytokine therapy. Axitinib was associated with improved progression-free survival; on the basis of these data, this agent was approved for second-line therapy of metastatic RCC.13 Finally, tivozanib has been compared to sorafenib among patients who had not previously received VEGF or mTOR-targeting therapies. While this study demonstrated tivozanibâ€™s activity, it was not FDA approved and is therefore not used.

Most recently, a multikinase inhibitor, cabozantinib, has been approved for the first-line treatment of mRCC. In the phase II CABOSUN trial, cabozantinib demonstrated improved progression-free survival compared to sunitinib.14 However, these results have proven controversial, with a number of concerns raised including a potential exaggerated effect due to the poor efficacy of sunitinib compared to what would be expected based on previous reports.15

Despite the efficacy of VEGF targeted therapies, resistance to VEGF-inhibition almost inevitably results. Therefore, research into the development of these resistance mechanisms and ways to target these pathways has been undertaken. Agents including nintedanib and dovitinib have been explored though these are not yet in routine practice.

Inhibitors of mTOR for Advanced ccRCC

Mammalian target of rapamycin (mTOR) plays a key role in regulating HIF-Î±, thus modulating the pathway between abnormalities in VHF and proliferation. Two analogous of sirolimus have demonstrated efficacy in treating advanced RCC, temsirolimus and everolimus.

A three-arm trial comparing temsirolimus, interferon, and the combination was undertaken among patients with pre-defined poor risk disease who had not previously received systemic therapy for RCC.16 This demonstrated improvements in progression-free survival and overall survival for patients receiving temsirolimus. Notably, the combination arm did not offer a benefit compared to interferon alone. Unlike temsirolimus which must be administered intravenously, everolimus is an oral agent. Among patients progressing on sunitinib and/or sorafenib, everolimus demonstrated significantly improved progression-free survival compared to placebo.17

First presented at ESMO in the fall of 2017 and subsequently published in the spring of 2018, CheckMate 214 demonstrated an overall survival (OS) benefit for first-line nivolumab plus ipilimumab vs. sunitinib.18 More details regarding this study may be found in the UroToday coverage of ESMO 2017. In short, among the subgroup of patients with intermediate or poor-risk RCC, treatment with nivolumab plus ipilimumab resulted in significantly improved overall response rate, comparable progression-free survival, and significantly improved overall survival.

Similarly, first presented at GU ASCO in the spring of 2018 and subsequently published, IMmotion151 reported a progression-free survival (PFS) benefit for first-line atezolizumab + bevacizumab vs. sunitinib.19 This regime was active with a significant benefit in progression-free survival among the whole cohort of patients, as well as a subset of PD-L1+ patients. More details regarding this study may be found in the UroToday coverage of GU ASCO 2018.

These trials are notable in that they demonstrated improved outcomes in first-line treatment, compared to the current standard of care, sunitinib.

Other Agents for Advanced ccRCC

Numerous chemotherapeutic agents have been explored in ccRCC. These include 5-FU, gemcitabine, vinblastine, bleomysin, and platinums. Meta-analyses of these data demonstrate poor response20 and thus cytotoxic chemotherapy is not indicated in the treatment of advanced RCC. Similarly, hormonal therapies including medroxyprogesterone have been explored but have no role in modern management of advanced RCC.

Integration of treatment options for patients with advanced RCC

With so many active agents available for the treatment of advanced RCC, it may be difficult to ascertain which treatment to offer patients who present in clinic. There are a number of ways to approach this issue â€“ first, one may take a quantitative approach, utilizing the available comparative data in a network meta-analysis; second, one may rely upon eminence, as in expert-informed guidelines; finally, one may rely on individual clinical experience. In this setting, all three options are available.

First, assessing this in a quantitative fashion, we performed a network meta-analysis of agents for the treatment of advanced RCC.23 While there are limitations to this approach including the reliance on the assumption of transitivity between studies, interesting conclusions may be drawn. First, assessing progression-free survival, we found that it was highly likely (91% chance) that cabozantinib provided the greatest benefit. However, when assessing overall survival, nivolumab plus ipilimumab had the highest likelihood of being the preferred treatment choice. Finally, when assessing adverse events, it was highly likely that nivolumab plus ipilimumab had the most favorable toxicity profile.

Second, considering a panel of expert opinion, the European Association of Urology updated their guidelines on the treatment of renal cell carcinoma recently. Their recommendations are highlighted in the following figure, taken from the EAU guidelines: 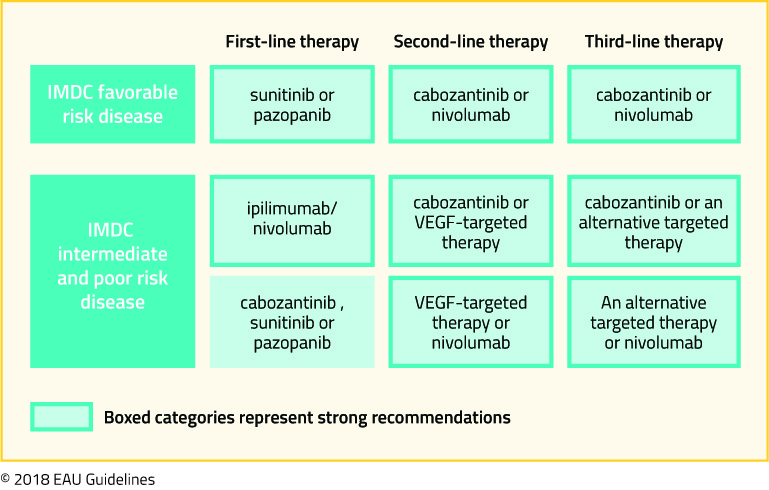 Finally, we may rely on the guidance of individual clinical experience. Anil Kapoor, MD who has extensive experience in the treatment of both localized and advanced RCC, offered his treatment approach recently to UroToday.