CONCLUSIONS: Progression of bone metastases during radium-223 therapy is uncommon. A bone flare (pain and/or radiological) may be noted during the first 3 months, and should not be confused with progression. Imaging by CT scan should be considered after three and six doses of radium-223 to rule out extraskeletal disease progression.

INTRODUCTION
Prostate cancer is the second leading cause of cancer-related death among men in the western world1 and 90% of patients with metastatic castration-resistant prostate cancer (mCRPC) have bone metastases.2 Bone metastases are associated with skeletal-related events such as pain, fractures and spinal cord compression.3

Radium-223 is an alpha-emitting radioisotope with calcium-mimetic properties, which therefore accumulates in bone areas with an increased turnover. Radium-223 targets bone metastases, and improves overall survival in patients with bone metastases,4 but is not indicated in mCRPC patients with visceral or bulky lymph node disease. Improved overall survival was observed in the pivotal phase 3 ALSYMPCA trial.4,5 The ALSYMPCA study did not mandate baseline staging or regular monitoring of antitumor activity by imaging.4 Thus, the use of radiological examinations, and how to interpret response to therapy, in patients receiving radium-223 is at present poorly deﬁned.6,7 Furthermore, in the ALSYMPCA trial, a ⩾ 30% decline of the tumor marker PSA was reported in only 16% of patients.4 In daily practice, management of  a  patient  receiving  radium-223  can be challenging in the absence of a PSA decline and due to uncertain imaging response data. Extraskeletal imaging may be important in patients with CRPC, since up to 50% will develop visceral metastases, that are not targeted by radium-223.8 The present study aimed to assess the radiological response in patients with mCRPC and bone metastases during radium-223 treatment.

Radium-223 therapy
All patients had documented disease progression before the initiation of radium-223 therapy. The patients were maintained on androgen deprivation therapy. Radium-223 therapy was given intravenously every 4 weeks, at a dose of 50 kBq kg−1 for up to six cycles. Treatment was applied as per local standard guidelines. Early treatment discontinuation ( <6 cycles of radium-223) occurred in patients with disease progression, unacceptable adverse events or death. Patient follow-up generally consisted of regular assessment of pain, opiate dose, physical examinations and laboratory assessments including hematologic, alkaline phosphatase (ALP) and PSA, at every cycle, and imaging studies (Tc-99m MDP bone scintigraphy and CT) at baseline and after 3 and 6 cycles of radium-223.

Statistical analysis, descriptive deﬁnitions and treatment outcomes
Descriptive statistics were used to present baseline and on treatment clinical parameters. Continuous variables were summarized with median and range, whereas counts and percentages were used to summarize categorical variables. When needed, Fisher’s exact test was used to compare frequency and percentages. For pain evaluation, we used a simple numeric pain score (each patient was scored in the range 0–4). Pain ﬂare during radium-223 treatment was deﬁned as a transient increase of bone metastases-related pain, as judged by the investigators, after the ﬁrst administration of radium-223 treatment. A clinical improvement during radium-223 therapy was deﬁned as an improvement of pain with a reduction in the pain score by at least one number.

Imaging response (bone scintigraphy and/or CT scan) during radium-223 therapy was reported as per PCWG2 recommendations.9 Radiological extraskeletal progression was deﬁned as progression in soft tissue (lymph nodes and/or visceral and/or local prostatic) or spinal cord compression. For the purpose of the present study, stable bone metastatic disease on subsequent scans, was deﬁned as absence of at least two new lesions, or at least two new lesions that were not conﬁrmed on follow-up imaging.

A radiological bone metastases ﬂare during radium-223 treatment was deﬁned as new bone lesions at the initial post-treatment assessment (after three cycles of radium-223) in an otherwise stable patient who is not progressing in an extraskeletal site (for example, soft tissue disease), and without conﬁrmation of progression (⩽2 new lesions after six cycles) as per PCWG2.9 For the evaluation of CT scan response, the Response Evaluation Criteria In Solid Tumors (RECIST) version 1.1 was applied.10 The response was assessed by local radiologists, nuclear medicine physicians and treating physicians. 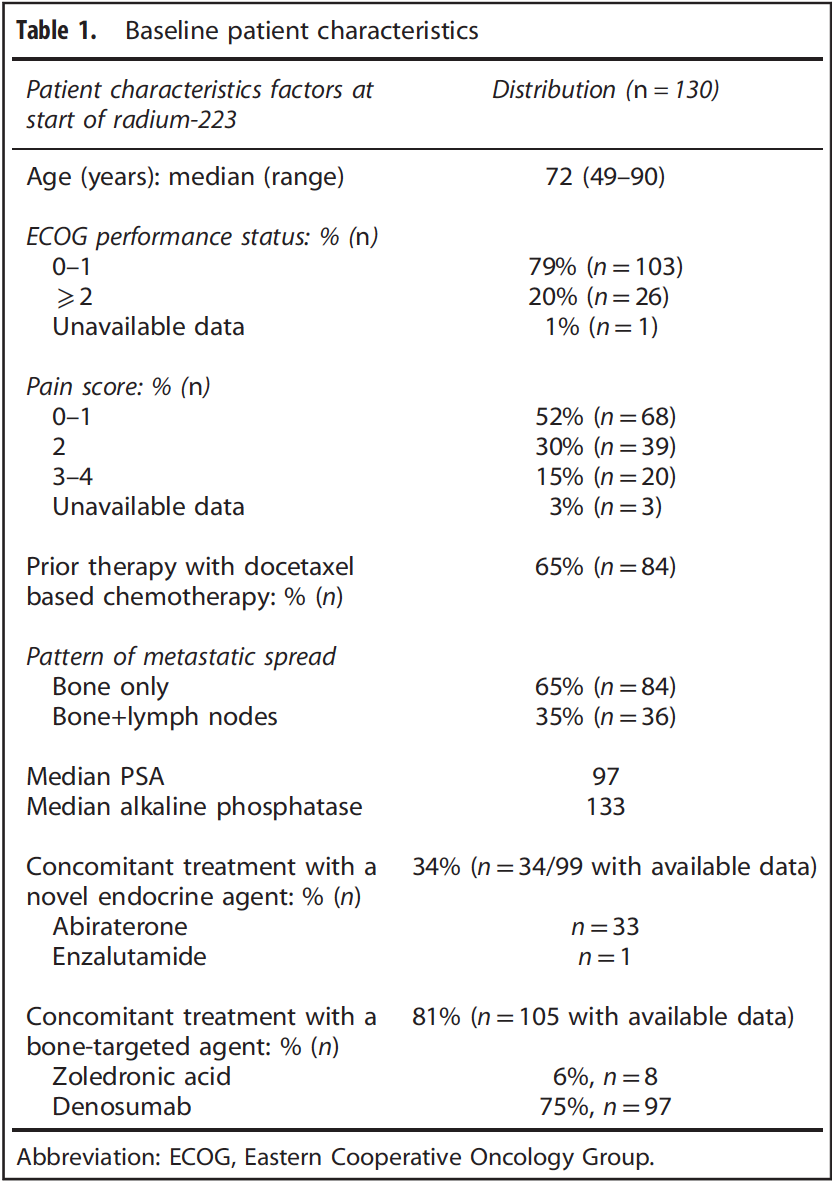 A transient increase in bone metastases-related pain as judged by the investigators (pain ﬂare) occurred in 27% (33 of 124 patients with available data). In patients with information on concomitant novel endocrine agent therapy (abiraterone or enzalutamide), a pain ﬂare was noted in 26% (n = 9) of patients treated with a concomitant novel endocrine agent versus 40% (n = 26) of patients treated only with radium-223. In the course of treatment with radium-223, a clinical improvement of bone metastases-related pain was documented in 61 of 124 patients (49%). Among these patients, 13% (n = 8/61) had an increase of opiates dose during therapy, while 26% (n = 16) had a decrease of dose. Concurrent palliative radiation was given to 5% of these patients (n = 3). With a median follow-up time of 29 months, 48% of the patients (n = 63) died by December 2016. Median overall survival was 20 months. 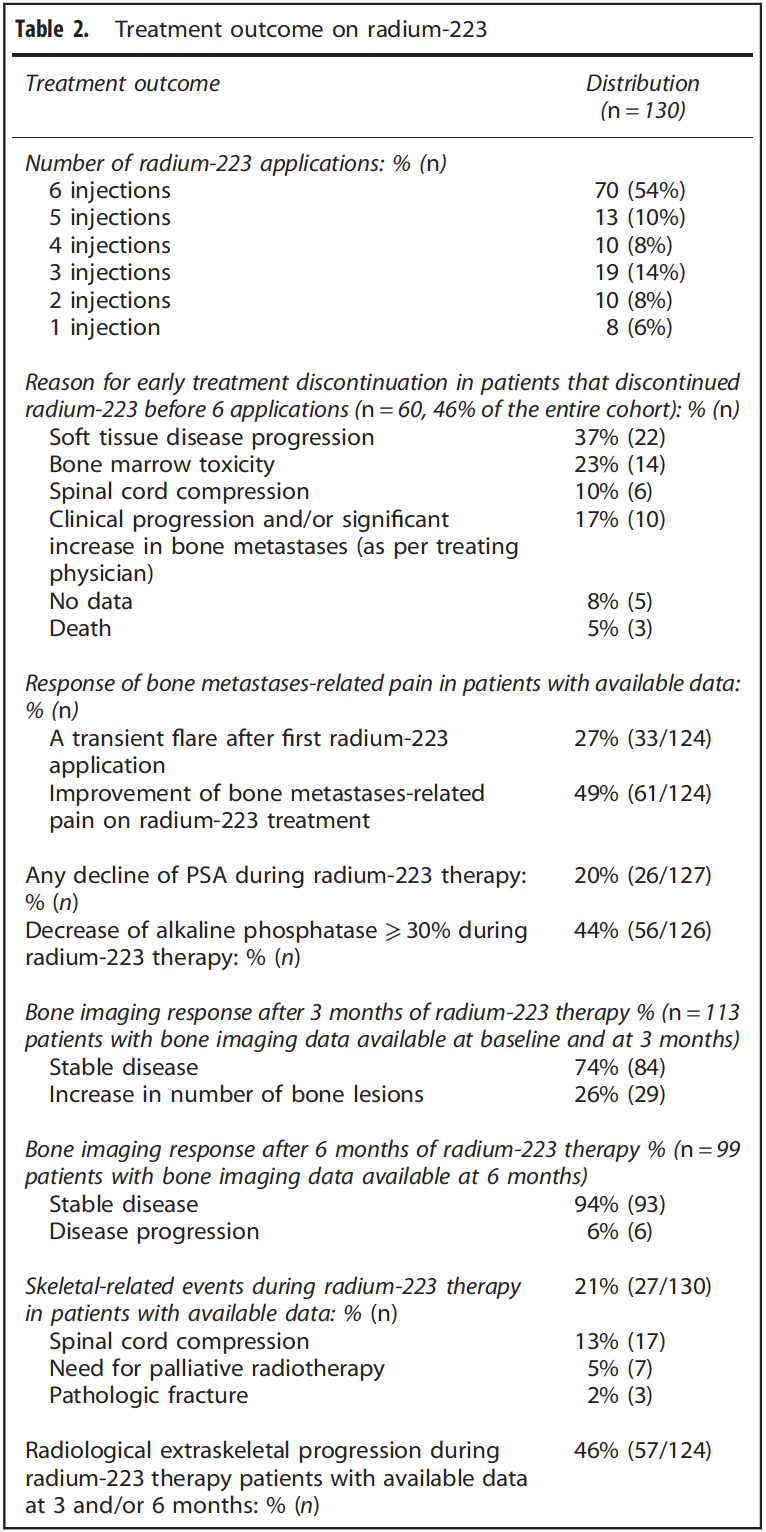 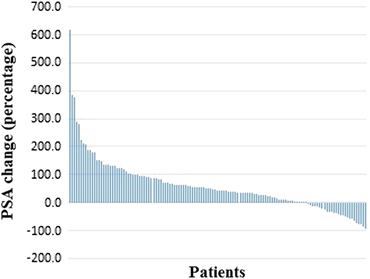 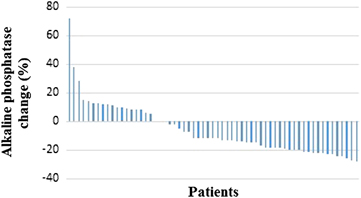 Although radium-223 is the ﬁrst bone-targeting agent that has shown a survival beneﬁt in CRPC patients with bone metastases, the radiological response during radium-223 therapy is at present poorly deﬁned.4 The present study found that in mCRPC patients treated with radium-223, development of new bone metastases, as deﬁned by PCWG2, is uncommon (6%), while extraskeletal radiological progression (for example, soft tissue) was noted in almost half of the patients. Furthermore, similar to other therapies for metastatic prostate cancer, a ﬂare phenomenon with increase of bone metastases-related pain, or increase in apparent number of bone metastases on imaging studies, may be noted during the ﬁrst three treatment cycles, and should not be interpreted as disease progression. This information is important for counseling patients before treatment with radium-223.

Our study has limitations. First, this is a multicenter retrospective study, which may be associated with various biases. Second, because of missing patient data (for example, biochemical and radiological), at present our conclusions remain descriptive. Another limitation is the absence of standardized guidelines for performing bone scintigraphy and CT scan and lack of subsequent central radiological review. Third, assessment of bone pain was not done in a standardized way. Nonetheless, the present study reﬂects a typical population of advanced CRPC patients. The baseline patient and the treatment characteristics of the present study are similar to previous data, for example, the pivotal ALSYMPCA trial4 and the international and United States early access trial.11,12 The radiological response reported in the present study is similar to that previously reported in a smaller retro- spective study where 34% of patients had extraskeletal radi- ological progression.6 Fourth, radiological bone ﬂare as deﬁned in the present study may reﬂect slow disease progression, and thus further follow-up is needed. Fifth, some of the patients with a clinical improvement during radium-223 therapy, had an increase of the opiate dose or palliative radiation during therapy, which can mask pain, and limit the beneﬁt evaluation of radium-223 therapy.


Moreover, among the patients that were treated concomitantly with a novel endocrine agent, this was initiated in the majority at the same time as radium-223, while in some it was initiated sequentially (after the initiation of radium-223 therapy). This heterogeneity may have an impact on interpretation of results. Furthermore, the number of patients with extraskeletal disease progression is relatively small, and thus the results must be interpreted with caution. Also, owing to lack of radiological data in some patients, the low incidence (6%) of radiological bone ﬂare described in the present study must be interpreted with caution. Finally, per the PCWG2 imaging criteria, there are no criteria for response of bone metastases, but only criteria for disease progression, as evident by the emergence of new lesions. Also, these criteria cannot be used in patients with diffuse metastatic bone disease or malignant superscan. Furthermore, the diagnostic accuracy of bone scan may be low (62–80%) compared with other imaging methods,12,13 and patients may progress without new lesions visible on a bone scan.14 Thus, while the present study found that in mCRPC patients treated with radium-223, progression of bone metastases is uncommon, and while data suggests that radiological progression-free survival may be associated with overall survival,15 the imaging assessment of bone metastases based on PCWG criteria is hindered by the reduced sensitivity of bone scan in diagnosing disease progression in the absence of new lesions, and by the lack of criteria for stable disease or response to therapy in bone metastases, especially in patients with bone metastases-only disease.

Despite the limitations, our clinical observation that a signiﬁcant number of patients may have extraskeletal (for example, soft tissue) disease progression on radium-223, should prompt clinicians to consider radiologic evaluation of patients with a CT scan during (for example, at 3 months) and after (at 6 months) radium-223 therapy.

Spinal cord compression was reported in the ALSYMPCA trial in 4% and in our series in 14% of patients, reﬂecting the advanced state of disease where patients received radium-223. In patients with extensive bone metastases of the spine, a magnetic resonance imaging (MRI) of the entire spine may be considered and in case of detection of signiﬁcant epidural soft tissue disease prophylactic radiation therapy may be applied before or while patients undergo treatment with radium-223. If no MRI is readily available, the recently published CT-based radiological signs that precede spinal cord compression can be analyzed and if positive, MRI evaluation should be performed.16 The practical implications of bone scintigraphy during radium-223 therapy is unclear, as new lesions at 3 months may represent bone ﬂare, and in the present study only 6% of patients had additional new bone lesions at 6 months. However, by repeating a bone scintigraphy during radium-223 therapy, one might consider ﬂare versus progression and the associated implications for the next line of therapy. If at least two additional lesions were found after three cycles of radium-223 therapy, and these were stable after six cycles, it would be considered as stable disease, for which a patient may not require immediate additional therapy.

Whether early radium-223 treatment before docetaxel chemotherapy, and concurrent therapy with a novel endocrine agent (abiraterone or enzalutamide) are associated with a decrease in the risk of radiological extraskeletal disease progression will be tested and conﬁrmed in ongoing large randomized phase III trials, namely ERA-223 (NCT02043678, abiraterone plus/minus radium-223) or PEACE III (NCT02194842, enzalutamide plus/minus radium- 223). Both these trials test radium-223 in the early CRPC setting where bone metastases are the predominant site of disease and both trials do not include a radium-223 monotherapy arm. Our data add evidence to the data suggesting that radium-223 can be safely combined with abiraterone or enzalutamide, and that this combination may positively impact outcome compared with treatment with radium-223 monotherapy. However, the prospective phase III clinical data have to be awaited.11

In conclusion, in this retrospective analysis evaluating imaging data of CRPC patients treated with radium-223, absence of progression in the bone was noted in a high percentage of patients. However, imaging with a CT scan at baseline and after three and six applications of radium-223 should be considered to rule out extraskeletal disease progression. Patients should be advised about possibility of a bone metastases-related pain and radiologic ﬂare during the ﬁrst radium-223 doses.

Read More: A Commentary from the Associate Editor of PCAN

Part of the data was presented (poster) at the annual meeting of the American Society of Clinical Oncology (ASCO), Chicago, June 2016, and published in abstract form (J Clin Oncol 34, 2016, suppl; abstr 5057).