Contemporary treatment options for patients with clinically localized prostate cancer include radical prostatectomy, radiotherapy, and active surveillance. Surgery can be curative for approximately two-thirds of patients choosing radical prostatectomy.1 However, men with adverse pathologic findings at the time of radical prostatectomy, such as the presence of positive surgical margins, extraprostatic extension, or seminal vesicle invasion,2,3 experience up to a 60% risk of recurrence at 10 years and may require subsequent radiation therapy.2

In three well-powered randomized controlled trials, adjuvant radiotherapy was associated with a lower risk of recurrence for men with adverse pathologic findings at the time of surgery, compared to a ‘watch and wait’ approach (SWOG S8794,4,5 EORTC 229116,7 and ARO 96-028,9). A randomized multi-institutional study of adjuvant radiotherapy for pathologically-advanced prostate cancer after radical prostatectomy (SWOG S8794), post-operative radiotherapy (P-RXT) after radical prostatectomy (Px) improves progression-free survival (PFS) in pT3NO prostate cancer (PC) (EORTC 22911), and a Phase III postoperative adjuvant radiotherapy after radical prostatectomy compared with radical prostatectomy alone in pT3 prostate cancer with postoperative undetectable prostate-specific antigen: (ARO 96-02/AUO AP 09/95). On the basis of these studies, joint guidelines were published by the American Urological Association (AUA) and the American Society for Radiation Oncology (ASTRO) recommending adjuvant radiotherapy for patients with adverse pathologic findings.2 More recently, the FINNPROSTATE trial, "Randomised Trial of Adjuvant Radiotherapy Following Radical Prostatectomy Versus Radical Prostatectomy Alone in Prostate Cancer Patients with Positive Margins or Extracapsular Extension (FINNPROSTATE)", was published, addressing a similar question and yielding similar results.10 In a recent meta-analysis including all four of these trials, use of adjuvant radiotherapy (compared to a permissive post-operative treatment approach with late salvage) was associated with consistent, and statistically significant, improvements in biochemical recurrence-free survival, but uncertain benefits in metastasis-free survival and no benefit in overall survival.11 Further, this analysis demonstrated that the routine use of an adjuvant approach is associated with high rates (35-60%) of overtreatment. Thus, in spite of the American Urological Association (AUA)/American Society for Radiation Oncology (ASTRO) guidelines, many experts do not support the routine use of adjuvant radiotherapy,12,13 due to concerns of overtreatment with associated toxicity, and due to limitations in the design, analysis, and interpretation of these studies.

Until very recently, there were no randomized data to compare adjuvant and early salvage radiotherapy. Observational data and decision modeling analyses had suggested equivalence of these two approaches,17 with benefits to the salvage therapy approach due to lower rates of toxicity and resource utilization.

Following presentation at the European Society of Medical Oncology (ESMO) 2019 meeting, four relevant manuscripts have been published to address this question including three randomized controlled trials and a prospectively planned meta-analysis of these data. The remainder of this manuscript will detail these studies.

The RADICALS-RT, "Timing of radiotherapy after radical prostatectomy (RADICALS-RT)", randomized controlled trial was an international, Phase III, multicenter, open-label trial implemented at 138 trial-accredited centers in Canada, Denmark, and the United Kingdom. Patients with non-metastatic adenocarcinoma of the prostate were eligible for the trial if they had undergone radical prostatectomy, had postoperative PSA of 0.2 ng/mL or less, and at least one specified risk factor (ie. pathological T-stage 3 or 4, Gleason score 7–10, positive margins, or preoperative PSA of 10 ng/mL or more). Participants were randomly assigned within 22 weeks after radical prostatectomy to receive either adjuvant radiotherapy to the prostate bed with or without pelvis, or close observation with salvage radiotherapy to the prostate bed with or without pelvis given in the event of PSA biochemical progression, defined as either two consecutive rising PSAs with a PSA of ≥ 0.1 ng/mL, or three consecutive rising PSAs. Radiotherapy to the prostate bed used a dose-fractionation schedule of either 66.0 Gy in 33 fractions or 52.5 Gy in 20 fractions.

The primary outcome for RADICAL-RT was disease-specific survival and a key secondary outcome was freedom from distant metastases. In 2011, the primary outcome of RADICALS-RT was changed to freedom from distant metastases following a review of the expected event rate based on other publications. Biochemical progression-free survival was defined as freedom from PSA of 0.4 ng/mL or greater following postoperative radiotherapy, or PSA of more than 2.0 ng/mL at any time, or clinical progression, or initiation of non-protocol hormone therapy, or death from any cause. The trial had ~80% power to detect a hazard ratio of 0.70 if 5-year biochemical progression-free survival was 0.86 in the early salvage group. All analyses were done on an intention-to-treat basis.

The primary outcome for GETUG-AFU 17 was event-free survival, assessed as the time from random assignment to the first documented event, either disease relapse (locoregional or metastatic), biochemical progression, or death. Secondary outcomes were overall survival, metastasis-free survival, and incidence of acute and late toxic effects. The study was designed to show a 10% increase in the 5-year event-free survival rate, from 60% with early salvage radiotherapy to 70% with adjuvant radiotherapy (HR 0.70).

GETUG-AFU 17 enrolled 424 patients between March 7, 2008, and June 23, 2016, at 46 French centers. The plan was to enroll 718 patients, with 359 in each study group, however, early trial termination was recommended secondary to low event rates. At that time of accrual cessation, only 12 (5%) of 242 events needed for the primary outcome analysis had been reported; at that time 424 patients had been randomly allocated, 212 to the adjuvant radiotherapy group and 212 to the salvage radiotherapy group. At the time of analysis, 54% of patients in the salvage radiotherapy group had initiated radiotherapy after biochemical relapse.

The primary endpoint for RAVES was freedom from biochemical progression, and secondary endpoints were time to initiation of androgen deprivation therapy (ADT), time to local, regional, and distant progression, and overall survival. Additional secondary endpoints (not reported in this first analysis) were quality-of-life outcomes, anxiety and depression, adverse events, disease-specific survival, quality-adjusted life-years, and cost-utility. In terms of a power calculation, salvage radiotherapy would be considered to be non-inferior to adjuvant radiotherapy if the 5-year freedom from biochemical progression was at most 10% lower than that for adjuvant radiotherapy (ie. >64%).

As described above, three randomized controlled trials were contemporaneously designed and began accruing to assess the comparison of adjuvant and early salvage radiotherapy strategies, each with a different primary outcome: time free of metastasis (RADICALS-RT), event-free survival (GETUG-AFU 17), and biochemical progression (RAVES). These outcomes were selected as “intermediate” endpoints due to the difficulty of accruing and powering a trial for longer-term survival outcomes. On this basis, a collaborative was struck in 2014 which all three trials were recruiting to allow for a prospectively designed individual patient data meta-analysis of the three trials. As an intermediate step, the group planned an aggregate data meta-analysis which is what has been reported to date.21

Given that each study was designed and powered to assess a different outcome, the collaborative group defined a primary outcome of event-free survival defined as the time from randomization to the first of biochemical progression, clinical or radiographic progression, initiation of non-trial treatments, death from prostate cancer, or PSA ≥ 2.0 ng/mL at any time following randomization.

In all studies, patients were randomized to receive adjuvant radiotherapy or a surveillance regime with early salvage radiotherapy administered at the time of biochemical recurrence. Treatment regimes, as detailed above, varied somewhat between studies with concomitant ADT being mandated in GETUG-AFU 17, being forbidden in RAVES, and being either at the treating physician's discretion or as part of a second randomization (RADICALS-HT) in the RADICALS trial. Also, notable are differences in study design: while RADICALS-RT and GETUG-AFU 17 were designed as superiority trials, RAVES was designed in a non-inferiority manner.

Characteristics of patients included in the systematic review mirror those of the individual trials as discussed above: patients had a median age between 64-65 years and the majority had either pT3a/b disease (79.8%), positive surgical margins (70.9%), and extracapsular extension (76.9%).

The authors then undertook a variety of pre-planned subgroup analyses. These demonstrated consistent results across subgroups defined on the basis of pre-surgical PSA less than or equal to 10 or greater than 10 ng/mL), Gleason score (7 vs. ≥ 8), seminal vesicle involvement (present vs. absent), surgical margins (positive vs. negative), and Cancer of the Prostate Risk Assessment Postsurgical (CAPRA-S) risk group (intermediate vs. high) with no benefit seen to the use of adjuvant radiotherapy in any of these groups.

Until recently, there has been a paucity of high-quality data available to delineate the optimal timing of radiotherapy for biochemical recurrence after radical prostatectomy. Data from RADICALS-RT, GETUC-AFU 17, and the RAVES phase 3 trials, in addition to the ARTISTIC prospective systematic review and meta-analysis, have shown that standard of care for treatment of biochemical recurrence should follow an early salvage rather than an adjuvant radiotherapy approach. 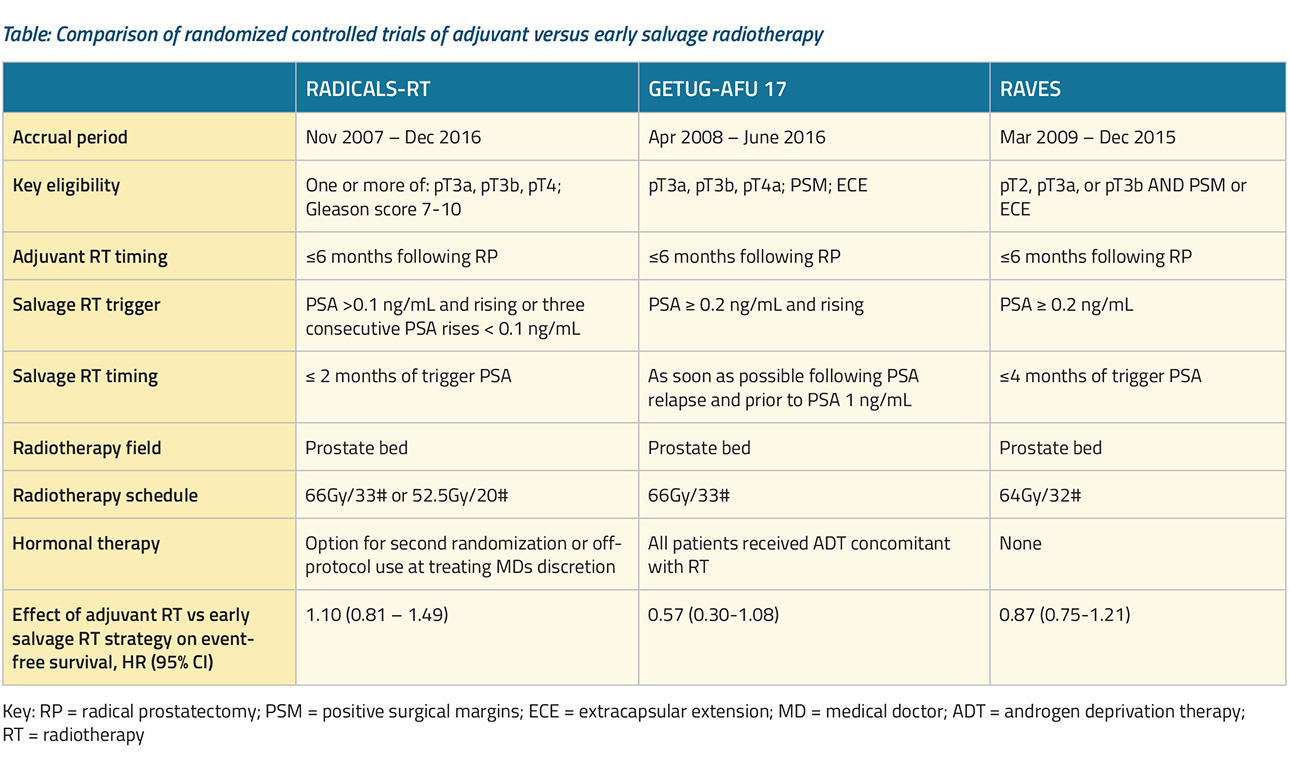 12. Walsh, Patrick C., and Nathan Lawrentschuk. "Immediate Adjuvant Radiation Therapy Following Radical Prostatectomy Should Not Be Advised for Men with Extraprostatic Extension Who Have Negative Surgical Margins." European urology 69, no. 2 (2015): 191-192.