Dr. Fizazi began by presenting a hypothetical patient with biochemically recurrent prostate cancer after definitive local therapy with rising PSA on ADT and no evidence of metastatic disease on traditional imaging (CT and bone scan) – a classic patient with nmCRPC. He then highlighted three recent Phase 3 studies (SPARTAN, PROSPER, and ARAMIS) all of which demonstrated improvement in metastasis-free survival (MFS) with the addition of a next-generation androgen receptor (AR) inhibitor to ADT in men with nmCRPC (apalutamide, enzalutamide, and darolutamide, respectively).1,2,3 In the previous session, Dr. Matthew Smith presented updated data on PFS2 (defined as time of study entry to progression on subsequent treatment) and overall survival (OS) from the SPARTAN study. Dr. Fizazi highlighted that PFS2 compares early versus deferred treatment with a next-generation AR inhibitor. The HR of 0.55 (p < 0.0001) for PFS2 among patients receiving APA + ADT compared to PBO + ADT suggests that early AR inhibition results in a meaningful improvement in time to progression on second-line therapy. In the OS analysis, the addition of APA to ADT is associated with a 25% reduction in death compared to PBO in men with high-risk nmCRPC. Dr. Fizazi highlighted that this OS analysis is premature and did not achieve the pre-specified significance threshold, thus we cannot yet definitively say that APA prolongs survival in the nmCRPC setting.

The second session focused on results of a presentation by Dr. Nick James who demonstrated that the addition of docetaxel to ADT in men with newly diagnosed mHNPC improved OS and failure-free survival (FFS) regardless of metastatic burden (high-volume vs low-volume by CHAARTED criteria) in an analysis of the STAMPEDE cohort. Dr. Fizazi highlighted the 19% reduction in death among patients who received docetaxel plus ADT compared to ADT alone (HR 0.81, p = 0.009). He then displayed this result in the context of nine randomized, Phase 3 trials for men with mHNPC, ranking them from the largest to smallest reduction in death, and distinguishing between studies of docetaxel (red) versus AR targeted therapies (blue). In this cross-trial comparison, the addition of next-generation AR targeted therapies to ADT resulted in greater reductions in death than the addition of docetaxel. 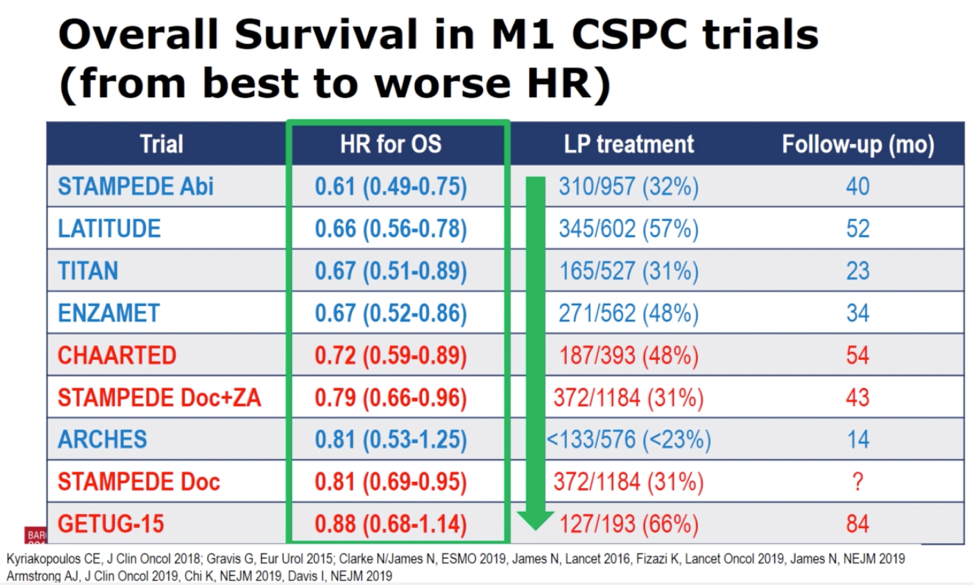 Dr. Fizazi then returned to the newly presented results from the STAMPEDE data to emphasize that finding that there was no evidence that the beneficial effect of docetaxel in mHNPC varies by metastatic burden for OS, FFS, progression-free survival, or prostate cancer-specific survival. This data is contradictory to the CHAARTED study, which reported OS benefit for men with high-volume, but not low-volume mHNPC.4 In contrast to the controversy over the effect of metastatic disease burden on docetaxel in men with mHNPC, Dr. Fizazi emphasized that the AR targeted therapies unambiguously improve OS in men with both high- and low-volume disease. Returning to the results of the table above, he argued that (besides access and cost), given the greater benefit seen across the trials of AR targeted therapy compared to docetaxel, and their efficacy independent of metastatic disease burden, that AR targeted therapy should be first-line therapy for all men with mHNPC. In a final point, Dr. Fizazi highlighted the value of research to identify predictive molecular biomarkers to determine on an individual patient level, who would benefit from first-line AR targeted therapy versus docetaxel.


Presented by: Karim Fizazi, MD, PhD, Medical Oncologist, Head of the Department of Cancer Medicine at the Institut Gustave Roussy, Villejuif, France and Professor in Oncology at the University of Paris