Importantly, 76 patients (~19%) who were receiving placebo crossed over to receive apalutamide. At the primary analysis for MFS, apalutamide was associated with improved overall survival (OS) (HR 0.70, 95% CI, 0.47-1.04; p = 0.07) and time to initiation of cytotoxic chemotherapy. However, the OS results were immature, with only 104 of 427 events (24%) required for the prespecified final OS analysis. During the prostate cancer session at the 2019 European Society for Medical Oncology annual meeting (ESMO), Dr. Matthew Smith, on behalf of the SPARTAN investigators, presented updated data from this phase III trial, specifically the second interim analysis for OS after 285 events (65% of required events).

For SPARTAN, 1,207 patients with nmCRPC and prostate-specific antigen doubling time of ≤ 10 months were randomized 2:1 to receive apalutamide (240 mg QD) or placebo, with ongoing ADT. The OS effect of apalutamide vs placebo was assessed using a group sequential testing procedure with O’Brien-Fleming-type alpha spending function. Of note, the required p value for statistical significance at the second interim analysis was 0.0121. OS was analyzed by Kaplan-Meier method and Cox model.

Results of the apalutamide treatment effect for OS was also consistent across subgroups. The 4-yr OS rates for apalutamide was 72.1% and 64.7% for the placebo group. At the second interim analysis, the proportion of patients who received subsequent life-prolonging therapy was 69% in the placebo group and 40% in the apalutamide group. Time to PFS2 also favored apalutamide: HR 0.55, 95% CI 0.45-0.68 (median 55.6 months vs 43.8 months). 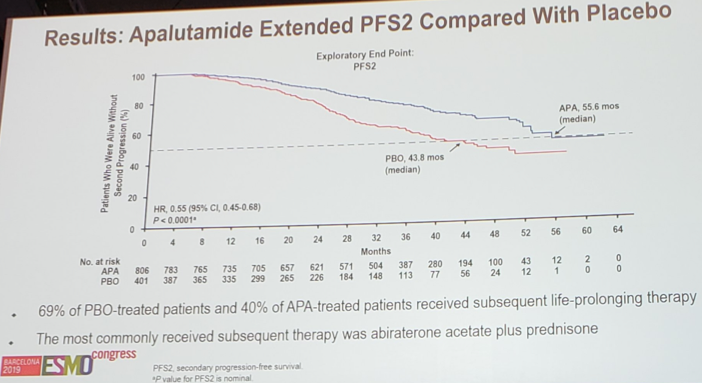 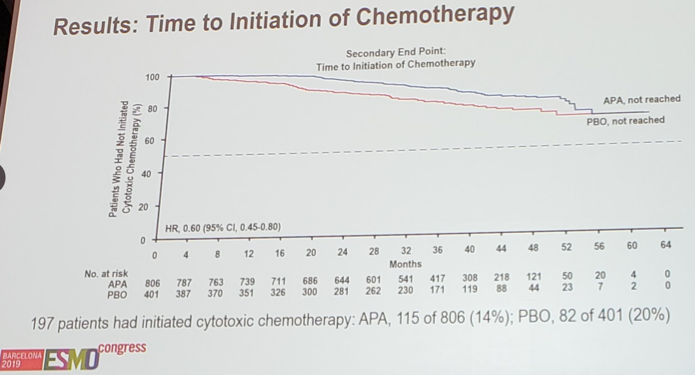 Dr. Smith conclude his presentation of the second interim analysis of SPARTAN with the following take-home messages: