Published 20 March 2019
Barcelona, Spain (UroToday.com) Dr. Nguyen presented a summary of the latest news in the treatment of metastatic hormone-sensitive prostate cancer (mHSPC). Four recent major trials were summarized and discussed in this presentation:
Up until the publication of these recent trials, the data we had on mHSPC was limited and based on the CHAARTED, GETUG 15 and STAMPEDE (older data), as seen in table 1. But these four recent trials have given us plenty of new data to incorporate and absorb.

Table 1 – What was known up until now on mHSPC:

In ESMO 2018, Mr. Alex Hoyle presented STAMPEDE data demonstrating the role of abiraterone + prednisone + androgen deprivation therapy (ADT) in low-risk mHSPC. The definition of high risk or high-volume according to CHAARTED and LATITUDE differ, as can be seen in table 2, and depending on the definition used, the results can change when comparing these patients.

Table 2 – Difference in risk and volume between CHAARTED and LATITUDE:

This data from STAMPEDE presented at ESMO 2018 demonstrated that abiraterone +prednisone +ADT resulted in a significant improvement in all outcomes, when compared to ADT alone (Figure 1). 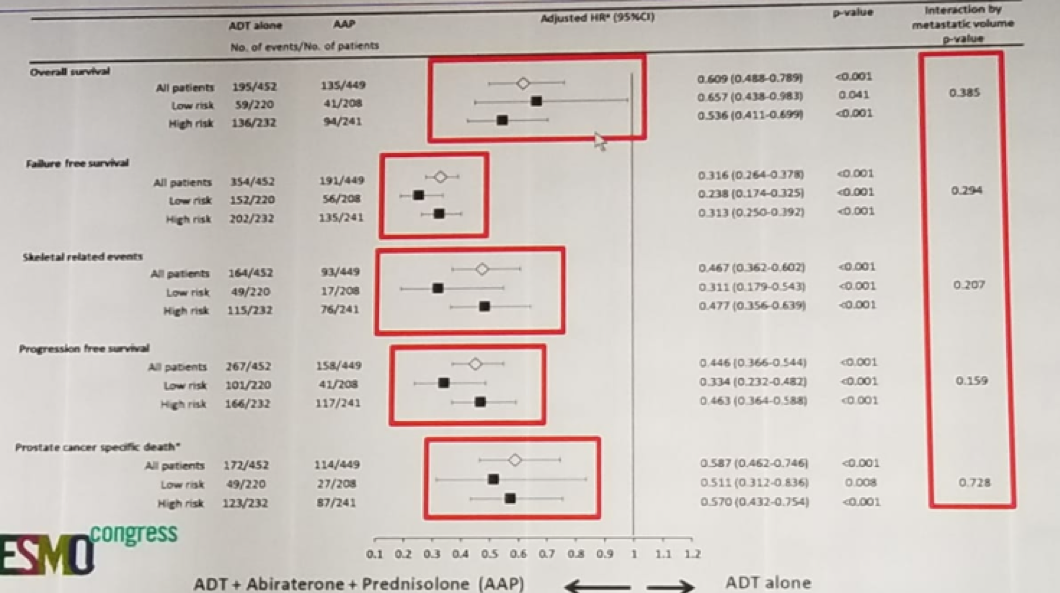 This study demonstrated that both in low risk and high-risk disease, abiraterone + prednisone + ADT demonstrated an overall survival advantage, compared to ADT alone, as can be seen in figure 2.

Figure 2- Overall survival in low and high disease in the STAMPEDE trial:

Next, the final analysis of the LATITUDE study was discussed by Dr. Nguyen. This was presented in the recent GU ASCO in 2019 by Dr. Kim Chi. The study design of LATITUDE is shown in figure 3. This study was conducted in 235 sites in 34 countries in Europe, Asia-Pacific, Latin – America, and Canada.

The final LATITUDE results were quite impressive, after 852 events. Importantly, the treatment arms in this study were well-balanced with a similar percentage of patients with high-volume disease according to the CHAARTED definition (82% vs. 78%). The median follow-up was 51.8 months, with a clear overall survival benefit seen in the abiraterone arm, with a hazard ratio of 0.66 (95% CI 0.56-0.78, p<0.001). This overall survival benefit was consistent across all subgroups of patients, as seen in figure 4. When stratifying the overall survival according to the volume of disease (using the CHAARTED definition), there was a clear advantage in the abiraterone arm in the high-volume disease, but for low-volume disease, the data did not look mature enough, and no difference was discerned (figure 5). 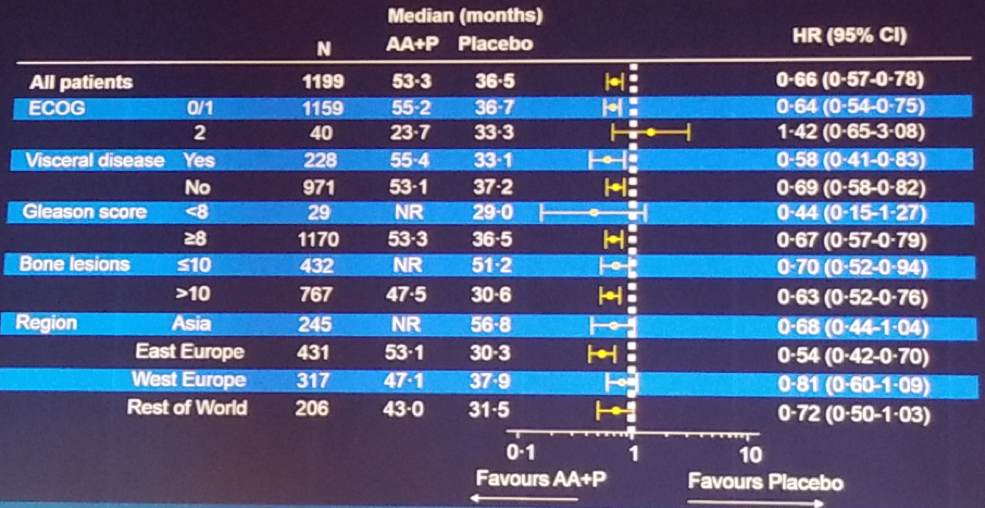 Figure 5 – Overall survival stratified by disease volume in the final analysis of the LATITUDE trial:

Concluding this segment of the discussion, Dr. Nguyen stated that we now have data on both docetaxel and abiraterone in the treatment of low- and high-volume disease in mHSPS patients, summarized elegantly in figure 6.

The next topic discussed was the STAMPEDE study of radiotherapy to the primary tumor for men with newly diagnosed mHSPC, presented by Dr. Parker at ESMO 2018. Until this study was presented, the only pertinent similar trial was the HORRAD study, assessing radiotherapy to the prostate tumor as well in the same patients, but demonstrating negative results, with no difference in the overall survival when stratifying patients to those with high- and low-volume disease. The study design of STAMPEDE is shown in figure 7. The results were also stratified by age (<70 vs >-70), nodal involvement (N0 vs. N1 vs. Nx), randomizing site, WHO performance status (0 vs. 1 or 2), type of ADT, aspirin or NSAIDS use, and docetaxel use.

The results showed no overall survival difference after three years of follow-up (65% for the radiotherapy arm vs. 62% for the standard of care arm), with a HR of 0.92 (95% CI 0.8-1.06, P=0.266). This study showed clear evidence that effect size does differ by disease burden, with a clear overall survival advantage in the radiotherapy arm in patients with low volume metastatic disease only (HR 0.68 [95% CI 0.52-0.9], p=0.0098). No overall survival difference was discerned in the high-volume metastatic disease (Figure 8).

Currently, there is evidence that abiraterone and prostate local radiotherapy improves overall survival in low-volume mHSPC patients. This leads us to ask whether surgery of the prostate can improve overall survival in a similar fashion to radiotherapy? And whether local therapy can synergistically work with abiraterone and intensify its beneficial effect in these patients. To answer these questions and assess the role of surgery, there is currently an ongoing SWOG randomized phase 3 trial. In this trial standard systemic therapy plus definitive treatment of the primary tumor in mHSPC patients is compared to standard systematic therapy alone. The study is led by Dr. Brain Chapin (study design shown in figure 9). Importantly, the study protocol allows for the standard systematic therapy to include abiraterone, and the primary therapy can be either surgery or radiotherapy. 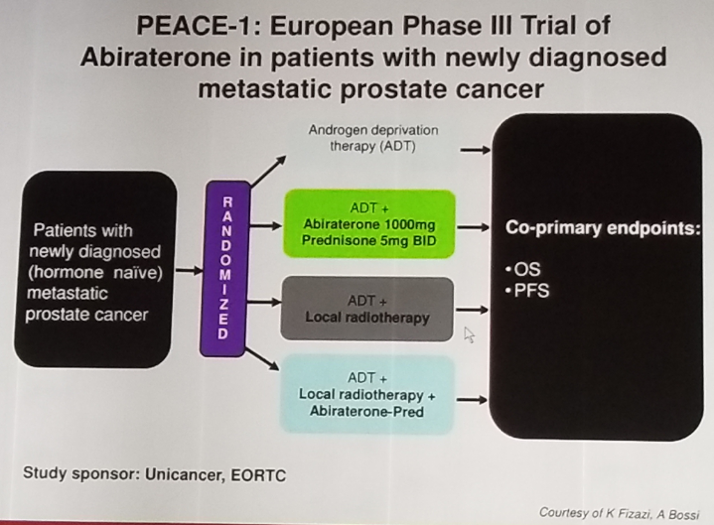 Lastly, the ARCHES trial was discussed, which was originally presented at GU ASCO in 2019 by Dr. Armstrong. This trial assessed enzalutamide with ADT compared to ADT alone in mHSPC patients. The design of this trial is shown in figure 11. The primary endpoint was radiographic progression free survival.

The study demonstrated a clear radiographic progression free survival benefit in the enzalutamide arm with a hazard ratio of 0.39 (95% CI 0.3-0.5), P<0.0001, as seen in figure 12. This outcome advantage was consistent in low- and high-volume disease. In the interim analysis, no difference was seen in the overall survival, but these results are most probably not mature enough.

There are other agents being investigated in the mHSPC setting. For enzalutamide, we are still awaiting the final overall survival results in the ARCHES trial, and the results of the ENZAMET trials are also awaited. Apalutamide, a similar agent to enzalutamide, is currently being assessed in the TITAN trial, and recently Janssen had announced that this trial had positive results for overall survival (January 31st, 2019). Lastly, we are also awaiting the results of Darolutamide, being assessed in the ARASENS trial.