San Francisco, CA (UroToday.com) The introduction of androgen-axis targeted therapies has drastically altered the landscape of advanced prostate cancer. Abiraterone acetate (AA) and Enzalutamide (ENZA) have been driving the change, and have been utilized in even earlier stages of advanced prostate cancer. Two recent studies, STAMPEDE, and LATITUDE,1,2 have established the utility of adding AA + prednisone to ADT among men with high‐risk, hormone‐naïve prostate cancer (PCa).  Both studies found an approximately 36-37% reduction in overall mortality and an about 50% reduction in radiographic-progression free survival. With these results, AA combined with ADT has become established as a new SOC for men with de novo high-risk hormone naïve PCa. This, in conjunction with CHAARTED,3 which demonstrated the efficacy of docetaxel + ADT in men with primarily high volume disease burden, has moved these therapies up much earlier in the treatment paradigm.

However, as is usually the case, there has been an ongoing effort to establish the efficacy of ENZA in the same disease space. As they have both had similar outcomes when utilized in later disease states, it is not unreasonable to expect similar outcomes when utilized in this particular patient population. To that effect, Andrew Armstrong, MD, presents the results of the ARCHES trial - a multinational, double-blind, phase 3 study (NCT02677896).

Men with metastatic hormone-sensitive PCa (mHSPC) were randomized 1:1 to ENZA (160 mg/day) + ADT or placebo (PBO) + ADT. As there has been discussion regarding the volume of disease and appropriateness of therapy, patients were stratified by disease volume (based on CHAARTED3 criteria) and prior docetaxel therapy. Full protocol listed below:

In this study, 1150 men were randomized to ENZA (n=574) or PBO (n=576) in an intention-to-treat analysis. Baseline characteristics were balanced between groups and can be found below:

Of note, as 2 patients in each arm never received the drug, they were excluded from the safety profile analysis - ENZA (n=572) or PBO (n=574).

Overall, 67% had distant metastasis at initial diagnosis, 63%(727 men)had high volume disease, and 18% had prior docetaxel. He made a point to highlight this, as unlike the other studies in this space, prior docetaxel was allowed as part of the inclusion criteria–and patients were stratified based on prior docetaxel use.

Median follow-up was 14.4 mo. When looking at the primary endpoint, ENZA + ADT significantly improved rPFS (NR vs. 19.4 mo, HR 0.39) and similar significant improvements in rPFS were reported in prespecified subgroups of disease volume, the pattern of spread, region and prior docetaxel (HRs 0.24–0.53).

Below is the KM curve for the primary endpoint for the entire cohort: 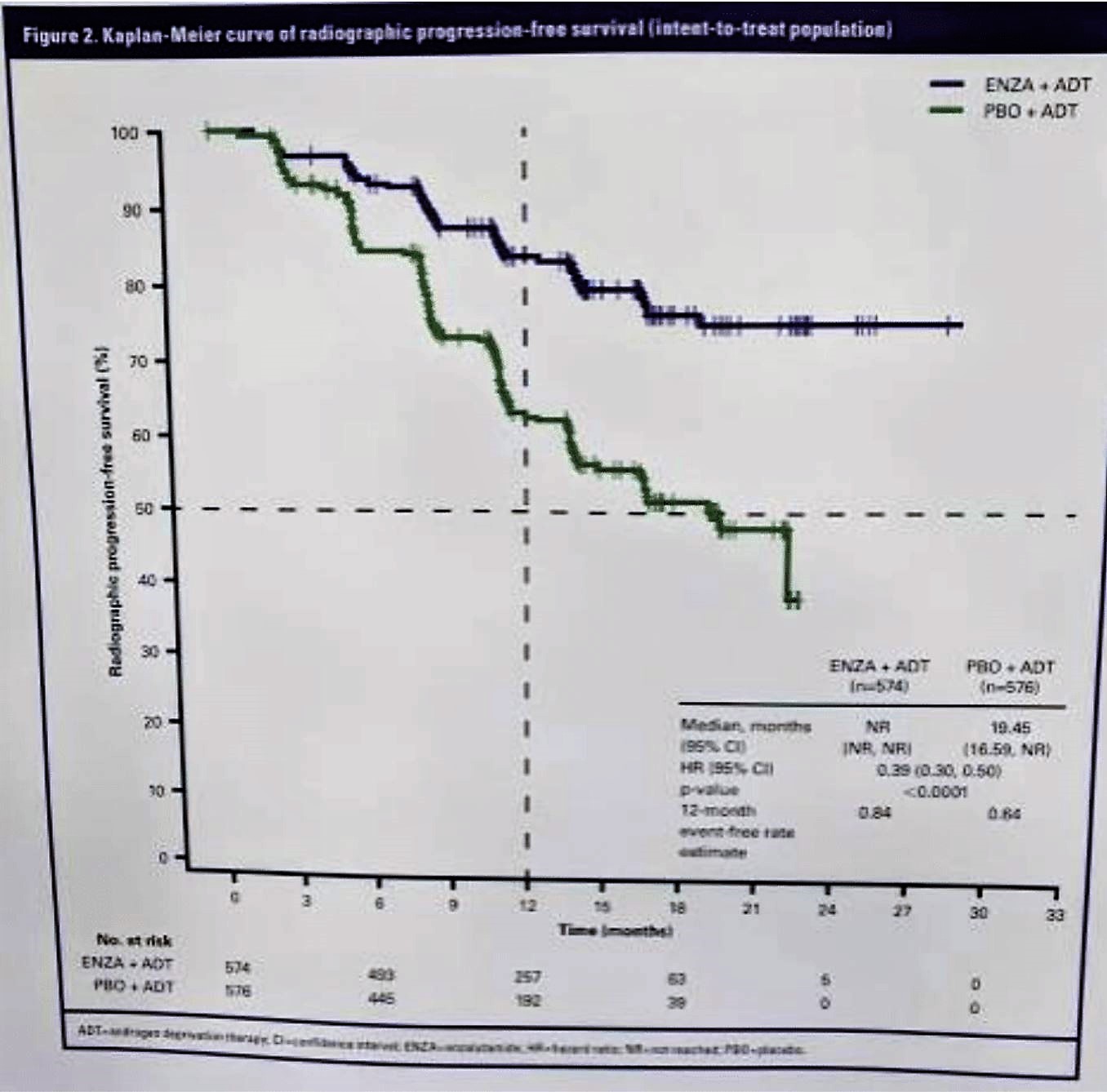 For all subgroups (except for patients with soft-tissue only metastases), the ENZA treated patients did better, as seen below:

Secondary endpoints also improved with ENZA + ADT and the full results can be found in the table below.

Unfortunately, OS data are immature and not final yet. Final results will be presented once this data is mature. At this time, only 84 deaths have been reported (25% of the required number of events). A statistically non-significant 19% reduction in deaths was observed favoring enzalutamide (HR 0.81, p =0.33).

He briefly also reviewed the immature quality of life data –this will be further presented in detail at upcoming meetings. QOL was assessed with FACT-P assessments over the course of the study –and there was no significant difference between the groups over the length of the study, as seen below:

In general, similar to studies of ENZA in other disease states, it was well tolerated. Grade 3–4 adverse events (AEs) were reported in 24.3% of ENZA pts vs 25.6% of PBO pts with no unexpected AEs. AE’s leading to withdrawal were observed in 7.2% of the ENZA treated patients and 5.2% of the placebo-treated patients.


A full summary of AE is below: 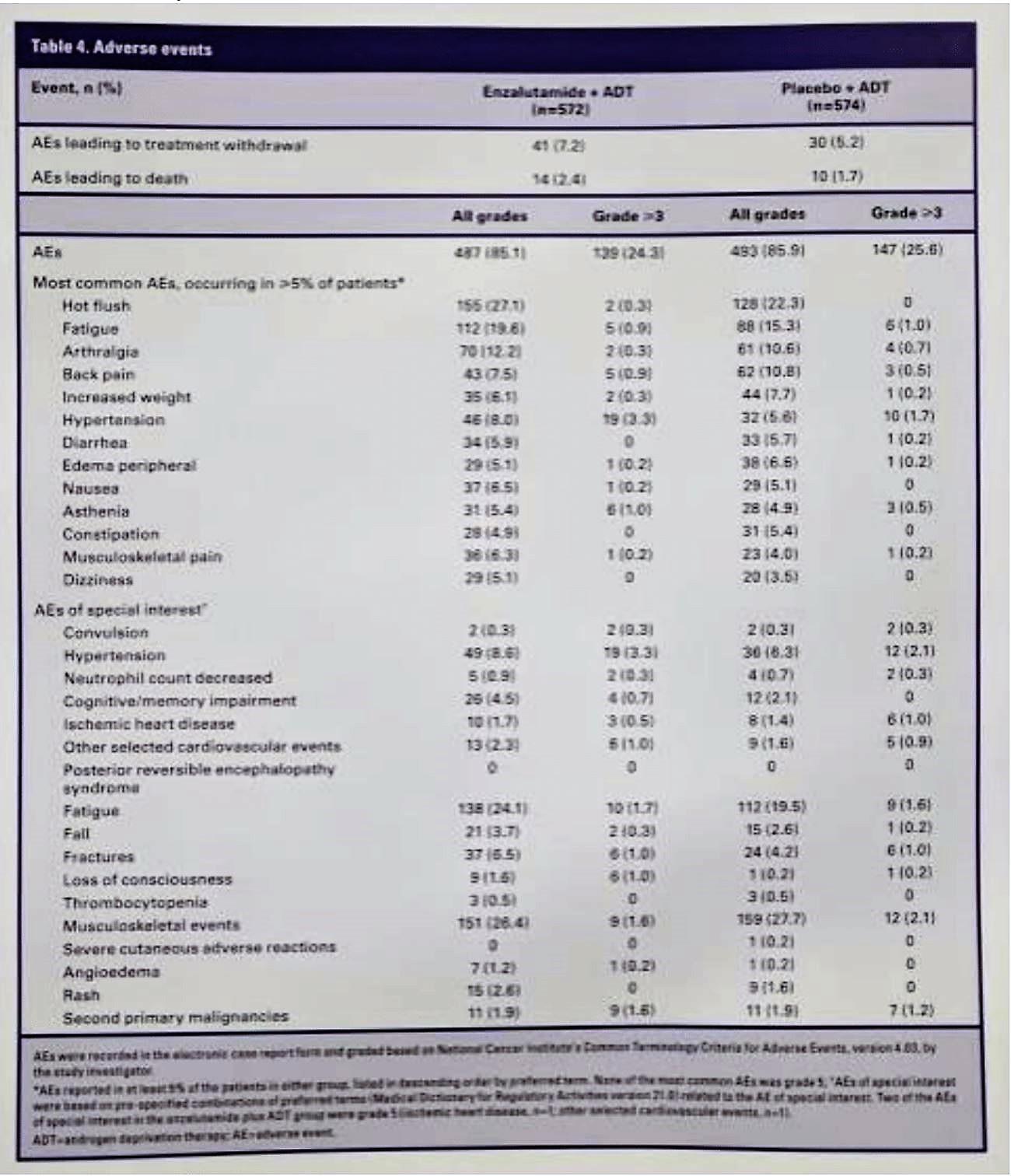 Based on this, Dr. Armstrong and colleagues conclude that ENZA + ADT significantly improved rPFS and other efficacy endpoints compared to ADT alone in men with mHSPC, with a preliminary safety analysis that appears consistent with the safety profile of ENZA in previous CRPC clinical trials. Perhaps this may be an alternative to Abiraterone +prednisone and docetaxel for men with de novo metastatic disease?