Since the seminal work of Huggins and Hodges1 seventy years ago, androgen deprivation therapy (ADT) has formed the cornerstone of management for advanced prostate cancer with indications including concurrent therapy with primary curative-intent radiotherapy, salvage therapy after recurrence following local therapy, and in the treatment of metastatic disease. While efficacious, nearly all patients will eventually develop castration resistance with disease progression despite castrate levels of testosterone. Among patients who receive ADT for biochemical recurrence following radical prostatectomy or radiotherapy, the development of castration resistance typically occurs prior to the identification of metastasis on conventional imaging, nonmetastatic castration-resistant prostate cancer (nmCRPC). NmCRPC is typically identified on the basis of the PCWG3 consensus definition for prostate-specific antigen (PSA) progression on ADT, namely a 25% PSA increase from nadir (starting PSA ≥1.0 ng/mL), with a minimum rise of 2 ng/mL in the setting of castrate testosterone (< 50 ng/dL).2 In these patients, treatment is aimed at delaying the development of metastasis, preserving quality of life, and increasing overall survival.

There have been rapid changes in the systemic therapy for advanced prostate cancer in the past 15 years, including cytotoxic chemotherapy and advanced androgen axis inhibitors, including abiraterone acetate, enzalutamide, apalutamide, and darolutamide. Following metastatic castration-resistant prostate cancer (mCRPC) and metastatic castration-sensitive prostate cancer (mCSPC), the last disease space to see the influx of novel androgen axis inhibitors was nmCRPC. Since 2018, three new agents have been approved in this disease space, enzalutamide, apalutamide, and darolutamide.

FDA approval was granted for these agents on the basis of demonstrated improvements in metastasis-free survival. However, since that time, additional data has been published assessing health-related quality of life and overall survival. Herein, we will briefly review the design and results of the three trials for these agents: SPARTAN (apalutamide), PROSPER (enzalutamide), and ARAMIS (darolutamide).

The study methodology and inclusion criteria for each of these three trials were broadly similar. Patients were recruited if they had nmCRPC and high-risk features for metastasis including an absolute PSA ≥ 2ng/mL with sequential rises despite castrate testosterone.3-5 The SPARTAN and ARAMIS trials also required two 50% increases in the PSA over the nadir. Further, each trial mandated that patients must have a PSA doubling time of less than 10 months.

All men had baseline staging imaging consisting of a bone scan and CT chest with either a CT or MRI of the abdomen and pelvis confirming the absence of metastatic disease. Local lymphadenopathy less than 2cm in size in ARAMIS and SPARTAN and less than 1.5cm in size in PROSPER was permitted if below the level of the aortic bifurcation. SPARTAN also required patients to have a CT head confirming the absence of intracranial metastasis.

ARAMIS uniquely allowed patients with seizure-predisposing conditions, whereas such patients were excluded from the other two trials. All three trials excluded patients with prior exposure to non-steroidal anti-androgens. PROSPER did not permit enrollment if the patient had any prior chemotherapy exposure, whereas SPARTAN and ARAMIS permitted chemotherapy if it had been given in the neoadjuvant or adjuvant setting.

Each of the three trials used a 2:1 randomization schema with allocation to the experimental agent and placebo, respectively. Patients continued on ADT throughout.

Results of the PROSPER and SPARTAN trials were published in 20184,5 while ARAMIS was published in 2019.3 Each of these studies demonstrated significant prolonged metastasis-free survival with the use of enzalutamide (hazard ratio [HR] 0.29, 95% confidence interval [CI] 0.24-0.35), apalutamide (HR 0.28, 95% CI 0.23-0.35), or darolutamide (HR 0.41, 95% CI 0.34-0.50). Network meta-analysis using a Bayesian indirect comparison demonstrated that apalutamide had a 56% likelihood of providing the greatest metastasis-free survival benefit (SUCRA 0.86) while enzalutamide had a 44% likelihood (SUCRA 0.81).7 Darolutamide was almost certainly (99% chance) the third-ranked non-steroidal anti-androgens.

This same network meta-analysis demonstrated that patients treated with non-steroidal anti-androgens were significantly more likely to experience grade 3 or 4 adverse events than those receiving placebo (odds ratio [OR]: 1.47, 95% CI:1.27-1.71).7 Among the non-steroidal anti-androgens, there was a 61% chance that darolutamide was the preferred agent (SUCRA 0.50) and 55% chance that apalutamide was the least preferred agent (SUCRA 0.19) with respect to rates of grade 3 and 4 adverse events.

As would be expected, baseline health-related quality of life was similar between patients in the intervention and placebo arms. As may be expected, active treatment was associated with longer time to symptom worsening, demonstrating a smaller change in health-related quality of life over time for patients getting active treatment.8-10 Interestingly, in the ARAMIS trial, active treatment was not associated with the relative worsening of hormonal domain scores, unlike the other trials.

Ongoing follow-up of each trial has allowed for the maturation of data on the key secondary endpoint of overall survival. Initial updated overall survival data from the SPARTAN trial were presented at ESMO 2019 and concurrently published in Annals of Oncology.11 At that time, with 67% of required overall survival events observed, there was evidence of improved overall survival (HR 0.75, 95% CI 0.59 to 0.96) though this didn’t reach statistical significance on the basis of the prespecified O’Brien–Fleming boundary of 0.0121.

At the 2020 ASCO Virtual Annual Meeting, updated overall survival data for all three studies were presented and data for PROSPER were concurrently published in the New England Journal of Medicine.12 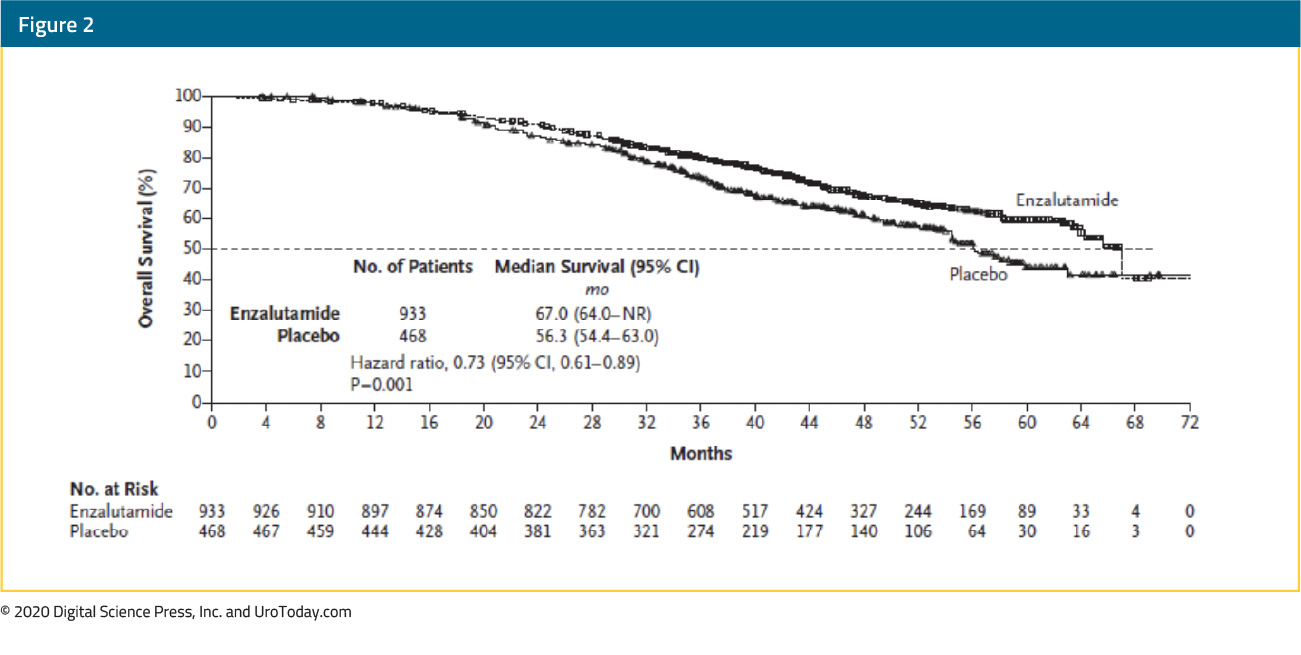 Similarly, the median follow-up at the time of data cut-off was 52 months in the SPARTAN. At this time, 428 (of a required 427) deaths had occurred to allow for analysis. Median overall survival was significantly longer among men receiving apalutamide than placebo (73.9 versus 59.9 months), corresponding to a relative reduction of 21.6% in the risk of death (HR 0.784, p-value 0.0161; O’Brien–Fleming threshold of 0.046 for statistical significance). Results were similar in the sensitivity analysis accounting for cross-over and when assessing time to cytotoxic chemotherapy. 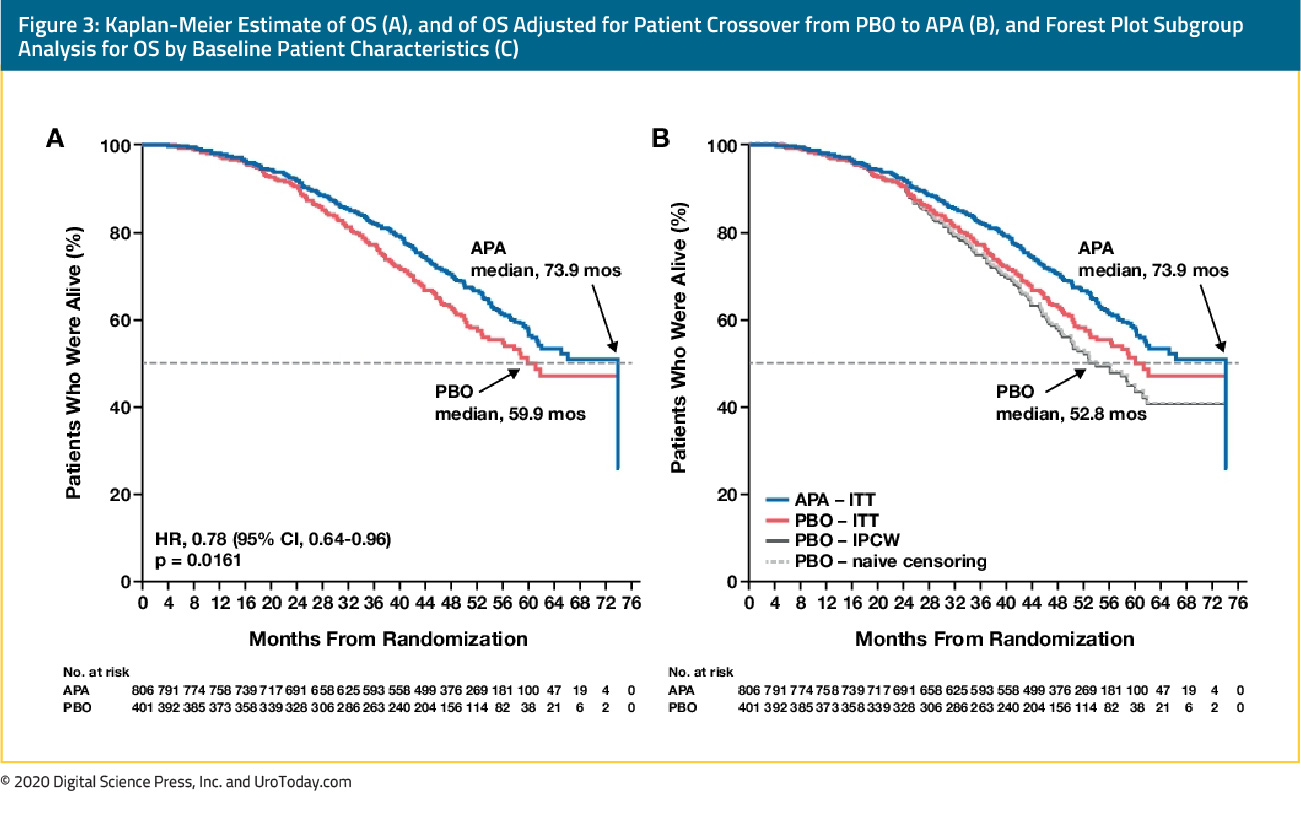 Finally, in the ARAMIS trial, the authors performed this reported final analysis after 254 deaths had occurred (15.5% of darolutamide and 19.1% of placebo patients). While the median overall survival was not reached in either the darolutamide or placebo arms, Cox proportional hazard modeling demonstrated a 31% relative reduction in the risk of death (HR 0.69, 95% CI 0.53 to 0.88) in spite of cross-over. 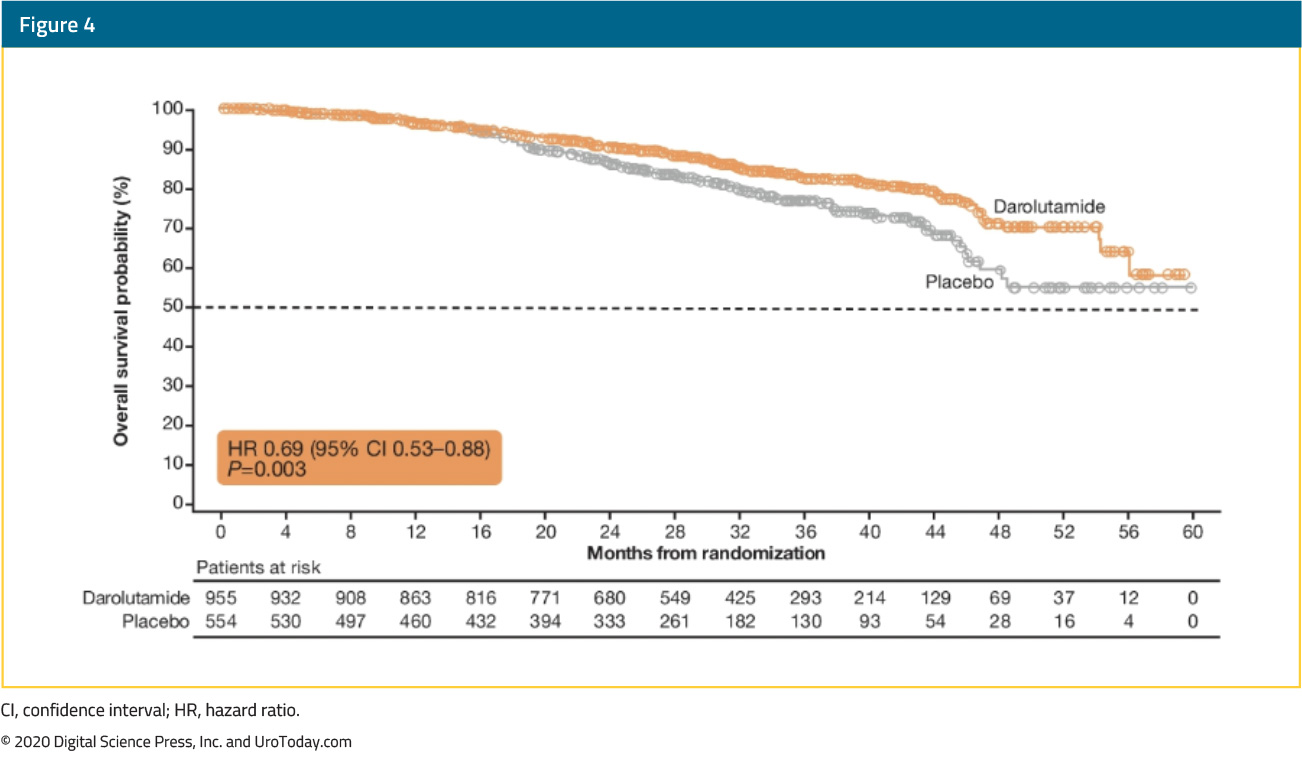 Each of these updated analyses demonstrated consistent benefits in the use of early novel androgen axis targeting agents across a variety of pre-specified subgroups (such as age, race, performance status, baseline PSA value, PSA doubling time, etc), as well as secondary endpoints such as times to pain progression, first cytotoxic chemotherapy, and first symptomatic skeletal event.

No new toxicity signals were detected on the basis of these updated data.

The treatment landscape for patients with nmCRPC has changed dramatically since 2018. There are now three FDA approved agents that were initially approved on the basis of improvements in metastasis-free survival which have now demonstrated benefits in overall survival.

Questions remain as to the optimal treatment selection. While a network meta-analysis of the updated overall survival data is inevitable and a randomized comparison of darolutamide and enzalutamide with a functional outcome endpoint is planned (DaroAct), comparative data to date are limited to network meta-analyses of metastasis-free survival and toxicity. A Bayesian analysis demonstrates that apalutamide and enzalutamide are likely to maximize metastasis-free survival while darolutamide is the preferred agent with respect to toxicity.7