(UroToday.com) There have been significant changes in the landscape of treatment of metastatic hormone-sensitive prostate cancer (mHSPC) over the last five years, beginning with the publication of the CHAARTED trial and STAMPEDE Arm C demonstrating improved overall survival for patients receiving docetaxel in addition to androgen deprivation therapy. Subsequently, in 2017, the LATITUDE trial and STAMPEDE Arm G demonstrated improved overall survival for men who received abiraterone acetate in addition to androgen deprivation therapy (ADT), in comparison to ADT alone. Since that time, apalutamide and enzalutamide have joined the list of approved and guideline-recommended agents in this disease space.

Notably, as a part of the multi-arm, multi-stage STAMPEDE platform, the primary analysis assessing abiraterone acetate included a range of patients with non-metastatic and metastatic hormone-sensitive prostate cancer. In contrast, the LATITUDE trial enrolled only men with high-risk metastatic disease (3+ bone metastases, visceral metastases, or Gleason score 8 or greater).

To briefly summarize, the STAMPEDE Arm G to Arm A comparison is based on a 1:1 randomization between the standard of care (androgen deprivation therapy) and standard of care plus abiraterone acetate (1000mg PO daily) and prednisolone 5mg PO daily. Treatment was continued until PSA, radiological, or clinical progression. The primary outcome was overall mortality and, in this analysis, data was frozen at 3 years following primary survival results. Analyses were performed using Cox proportional hazards models and flexible parametric models after adjusting for baseline stratification factors.

In this analysis with a database lock of April 3, 2020, 1003 patients with metastatic hormone-sensitive prostate cancer among a total of 1917 who were contemporaneously randomized to abiraterone acetate in addition to standard of care or standard of care alone. Accrual occurred between November 2011 and January 2014. Among the included patients, the median age was 67 years, 48% had a high metastatic burden of disease, 94% had newly diagnosed disease and median PSA was 97 ng/mL. 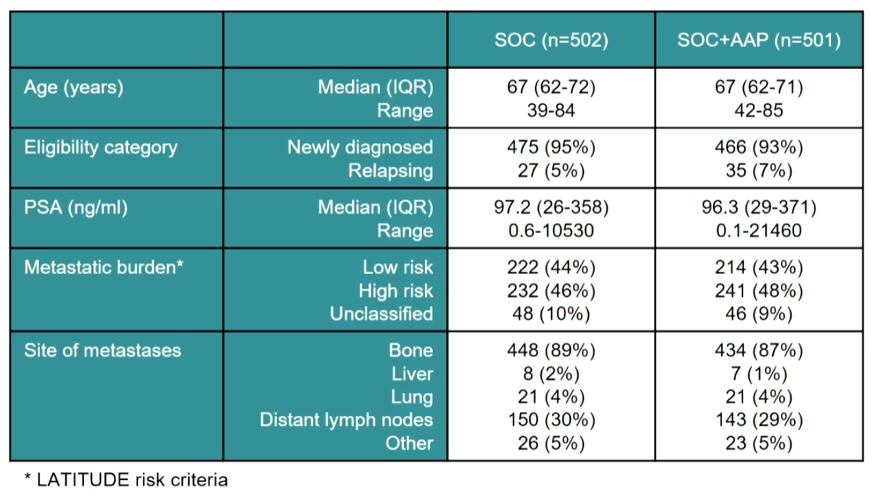 Toxicity in this updated analysis was similar to previous reports with 16% of patients experiencing severe (grade 3 or greater) toxicity.

The authors conclude that, in patients with metastatic hormone-sensitive prostate cancer, the addition of abiraterone acetate to ADT demonstrates sustained and significant improves in overall survival, with no significant differences on the basis of disease volume. Notably, this analysis shows that the benefit of abiraterone acetate does not attenuate over time, unlike the benefit of docetaxel in this disease space.

Related Content:
Quality of Life in the Treatment of mHSPC: The STAMPEDE Trial - Hannah Rush

ASCO GU 2020: Comparative Quality of Life in Patients Randomized Contemporaneously to Docetaxel or Abiraterone In the STAMPEDE Trial