San Francisco, California (Urotoday.com)  The multi-arm, multi-stage STAMPEDE trial has been a pivotal study in cementing novel drug combinations in the standard of care of localized and advanced prostate cancer over the last 10 years, with over 11,000 patients enrolled. From previously published arm comparisons, the STAMPEDE trial confirmed significant survival benefits from the addition of upfront abiraterone acetate or upfront docetaxel to androgen deprivation therapy. An outstanding question for the clinical implementation of these therapies is the relative risks and benefits with respect to the individual patient. In particular, the need to consider the impact on the quality of life of these therapies.  To this end, Hannah Rush, MBChB, Clinical Research Fellow at the MRC CTU at University College London, presented a comparative quality of life analysis of patients randomized to abiraterone or docetaxel in the STAMPEDE trial.


Dr. Rush demonstrated a previous comparative analysis of docetaxel and abiraterone arms in STAMPEDE, showing no significant difference in survival favoring either arm. Importantly, prospective quality of life data has been obtained, namely the EORTC QLQ-C30 and QLQ-PR25 questionnaires from baseline to 2 years.

Focusing on global QoL over 2 years, patient scores were 3.9 points higher in patients treated with abiraterone consistent with more favorable QoL (a definition of 4 points differences was considered clinically significant). At pre-defined time points of 12 weeks, 24 weeks and 2 years, abiraterone was associated with a consistently better global QoL. The dip in QoL with docetaxel seen in early in follow-up was also concordant with findings of QoL of the CHAARTED trial of ADT versus ADT plus docetaxel, previously published by Morgans et al. 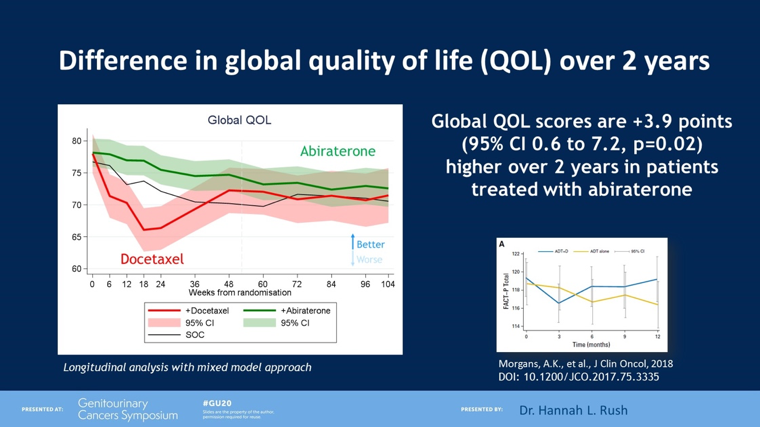 Dr. Rush concluded that the presented analysis was the only comparison of QoL of men randomized between the abiraterone and docetaxel, with clear evidence that abiraterone is associated with superior scores in several domains. Importantly, most differences were most marked in the first year and smaller differences may persist beyond the 2 year mark. Collectively these data should be incorporated into the discussion of the relative risks and benefits of abiraterone or docetaxel therapy for metastatic hormone-sensitive prostate cancer.