Barcelona, Spain (UroToday.com) PURE-01 was a single-arm phase II study of neoadjuvant immunotherapy with the PD-1 antibody pembrolizumab for the treatment of muscle invasive bladder cancer.1 Encouragingly, investigators from that trial found a 42% pathologic complete response rate and a 54% rate of pathologic downstaging to non-muscle invasive disease. The present study reports on several exploratory analyses derived from an amended and expanded PURE-01 cohort to investigate the role of FGFR3 alterations as a predictive biomarker of resistance to checkpoint blockade immunotherapy in muscle invasive bladder cancer.

Investigators carried out next generation sequencing of a 395 gene panel (FoundationCDx) as well as transcriptomic analysis (Decipher Biosciences), and report on clinical correlates of FGFR3 gene alterations and gene expression in the context of neoadjuvant checkpoint blockade immunotherapy. In addition, they explored the utility of an immune signature panel, Immune1902 as a predictor of response to pembrolizumab.

First, investigators sought to characterize FGFR3 altered tumors both clinically and via genomic, transcriptomic, and immune assays. At the time of analysis, the expanded PURE-01 cohort consisted of 112 patients with muscle invasive bladder cancer with a median age of 66 and 85% male predominance; most are current (25%) or former (46.4%) smokers. Interestingly, among the 17 patients harboring FGFR3 genomic alterations, there was a preponderance of cT2 tumors (76.5%) in contrast to the FGFR3 wild type tumors which were evenly distributed between cT2 and cT3. Tumor mutational burden and PD-L1 expression were similar between FGFR3 mutant and wild-type tumors. Within the limitations of a small sample size, FGFR3-altered tumors appeared to exhibit a lower rate of DNA damage response gene alterations and RB1 alterations. 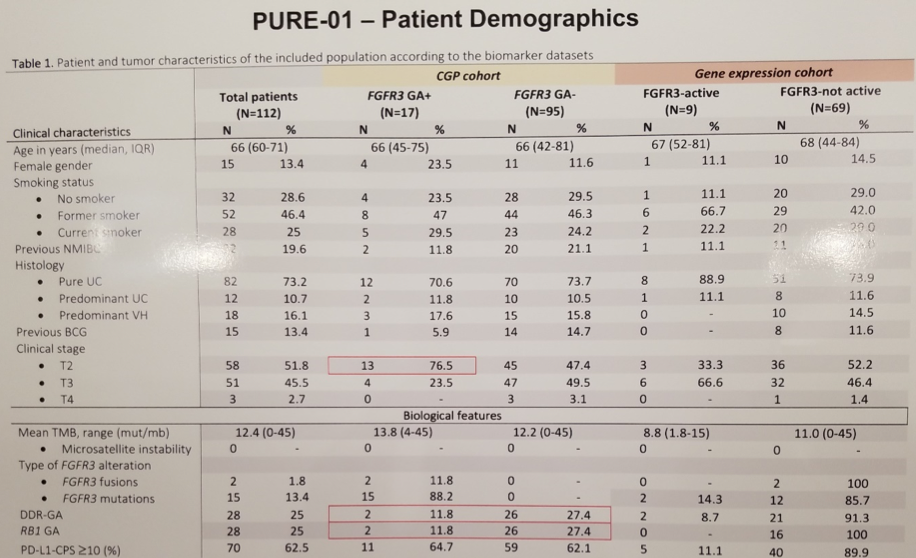 In addition to the PURE-01 cohort, investigators pooled 223 patients from multiple institutions with muscle invasive bladder cancer who received neoadjuvant platinum-based chemotherapy to compare biomarker performance between immunotherapy and cytotoxic chemotherapy. Unfortunately, the FGFR3 gene expression did not correlate either with the presence of FGFR3 genomic alterations (the specific details of which are not immediately available, perhaps representing avenues for continued study of FGFR3 as an immunotherapy biomarker). Furthermore, FGFR3 gene alterations did not correlate with pathologic response to neoadjuvant anti-PD-1 checkpoint blockade. FGFR3 expression also did not correlate with response to neoadjuvant platinum based chemotherapy.

Subsequent multivariate analysis did identify a correlation between the Immune190 assay of immune gene expression signature and pCR, with an odds ratio of 1.66 (p = 0.013). This finding was only observed with respect to pembrolizumab, and no such relationship was identified in the neoadjuvant chemotherapy cohort, perhaps lending further credibility to the hypothesis that the Immune190 is a true predictive biomarker.

In summary, FGFR3 gene expression was not associated with response to anti-PD-1 checkpoint blockade immunotherapy in the neoadjuvant setting. However, the specific genetic alterations in FGFR3 should be further classified and more precisely discern activating somatic mutations. In an exploratory analysis, investigators found that the Immune190 gene expression assay was able to predict for response to anti-PD-1; this result warrants prospective validation.