(UroToday.com)  Variation in prostate cancer incidence, mortality and outcomes between racial and ethnic groups has been wide recognized for many years. Men of African Ancestry experience the greatest burden of disease, due to a presumed interplay of socioeconomic factors, environmental exposures, and biologic/epigenetic phenomena. However, the causes underlying these differences is much less well understood. Certainly, work examining prostate cancer outcomes in equal access health care systems has demonstrated that that disparities in access to care contribute. As prostate cancer care moves to increasingly personalized care, there is an increasing recognition of the wide variation in access to care including genomic and precision medicine. In particular, men of African ancestry are underrepresented in genomic and precision medicine studies. In the Prostate, Testicular, and Penile Oral Abstract Session at the 2021 American Society of Clinical Oncology (ASCO) Annual Meeting, Dr. Mahal presented a comprehensive analysis encompassing genomic analysis and assessment of treatment patterns to better understand disparities in advanced prostate cancer.

The authors examined 11,741 patients with prostate cancer who underwent comprehensive genomic profiling as part of routine clinical care (Foundation Medicine Inc.). Among these individuals, the authors assessed the genomic landscape including predominant ancestry which was inferred using a SNP-based approach. In addition, the authors utilized a separate dataset, the US-based de-identified Flatiron Health-Foundation Medicine Clinico-Genomic Database (CGDB), of 897 patients with metastatic or castrate-resistant prostate cancer between January 2011 and June 2020. Among these patients, they examined clinical characteristics and treatment selections.

Among the 11,741 patients in the Foundation Medicine cohort, 1,422 (12%) men were of African ancestry and 9,244 (79%) men were of European ancestry. The majority of men had localized disease and presented with adenocarcinoma. 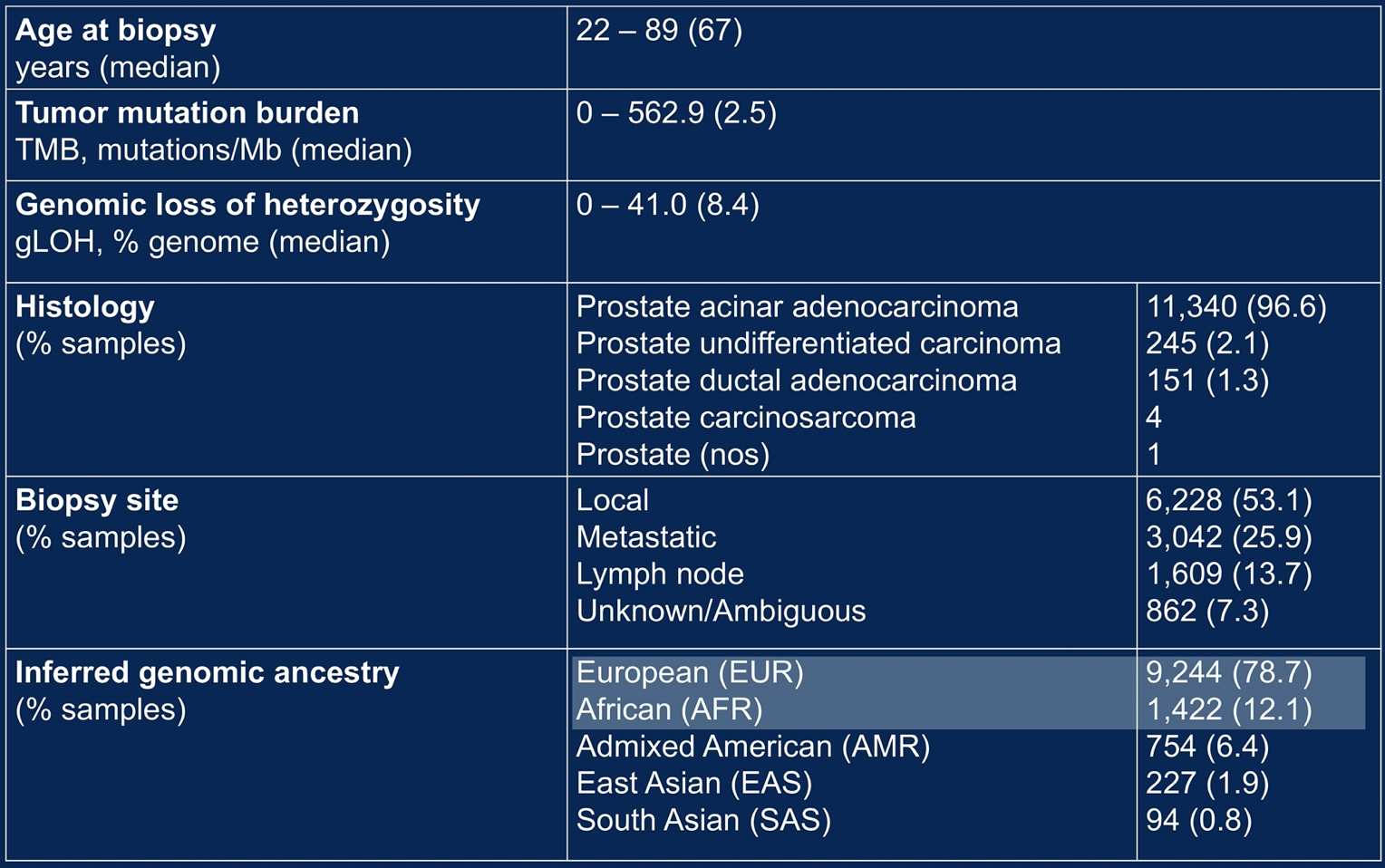 The authors then assessed the tumor genomic landscape, stratified by patient SNP-inferred ancestry. 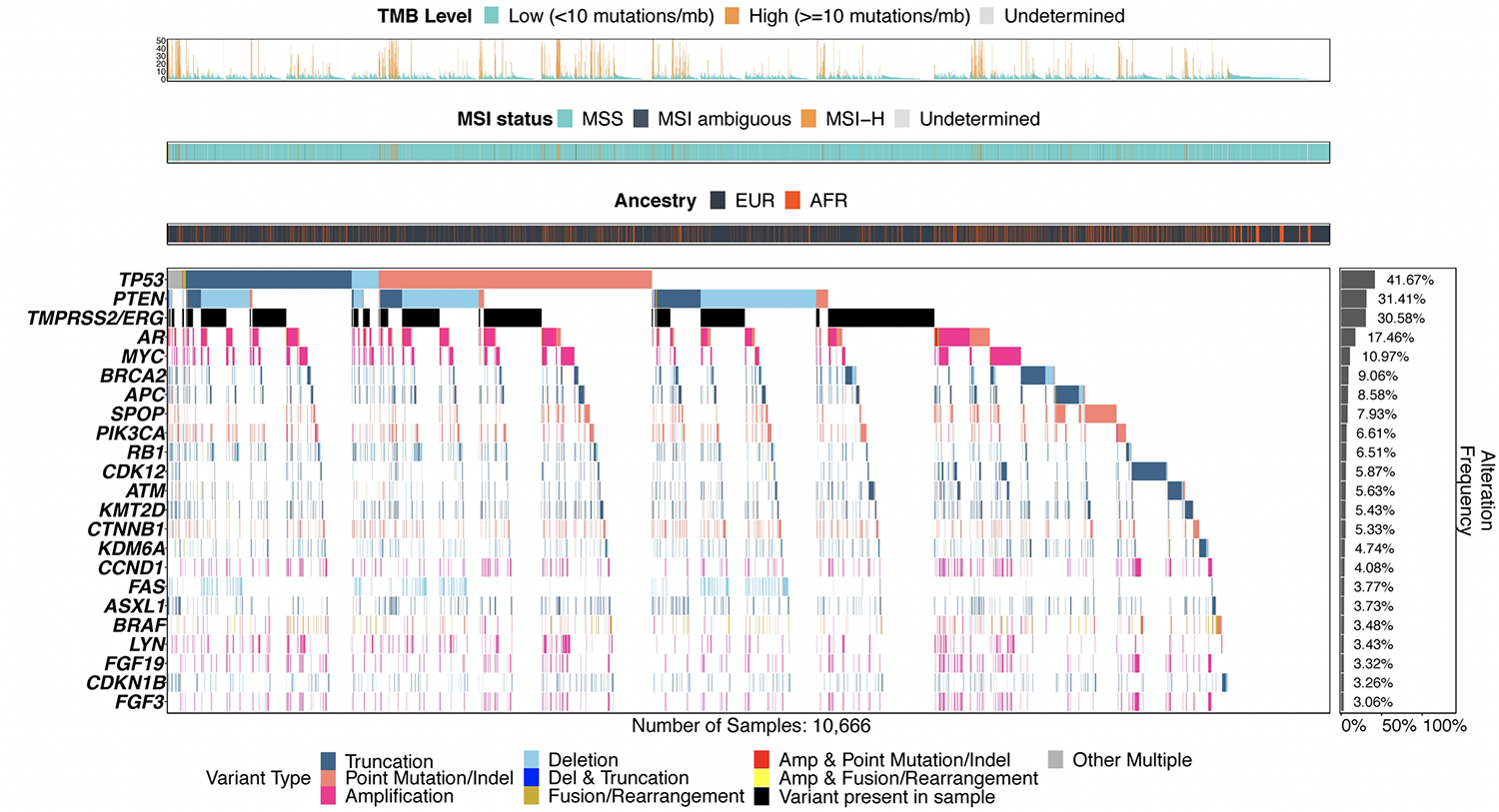 The authors did not find significant differences in alteration frequency for BRCA1/2, AR, DNA damage response pathway genes, and actionable genes with therapy implications between men of African ancestry than those of European ancestry.

Notably, men of African ancestry received a median of 2 lines of therapy prior to undergoing comprehensive genomic profiling while men of European ancestry had received a single line of therapy. This is particularly relevant as previously used treatment lines may affect observed genomic landscapes.

Further, while, the proportion of patients receiving immunotherapy and PARPi was similar across ancestry, however men of African ancestry were less likely to receive clinical study drug compared with men of European ancestry (11% vs 30%, p < 0.001). This was true even among men with actionable alterations (1% vs 6%, p < 0.001).

The authors conclude that this large analysis demonstrated largely similar rates of actionable gene alterations for men of African and European ancestry. As a result, intrinsic biologic differences are unlikely to explain observed differences in racial outcomes for men with prostate cancer. Despite this, men of African ancestry underwent comprehensive genomic profiling later in their disease course and were less likely to be treated on clinical trials, highlighting differences in care allocation between racial groups. Thus, equitable use of genetic testing, clinical trial enrolment, and subsequent precision medicine may decrease observed racial disparities.