(UroToday.com) For patients diagnosed with very high-risk prostate cancer who opt for radiotherapy, the guideline-recommended standard of care is concomitant treatment with 18 to 36 months of androgen-deprivation therapy (ADT). While associated with better cancer control than radiotherapy alone or radiotherapy in combination with short-durations of ADT, this regime is still associated with not infrequent biochemical recurrence and oncologic progression, as well as significant chronic ADT toxicity. In the Prostate, Testicular, Penile Poster Discussion session at the 2021 American Society of Clinical Oncology (ASCO) Annual Meeting, Dr. McBride presented data examining whether short-term intensification of androgen deprivation through the use of apalutamide and abiraterone acetate in addition to leuprolide with prostate radiotherapy would improve cancer control and minimize morbidity. 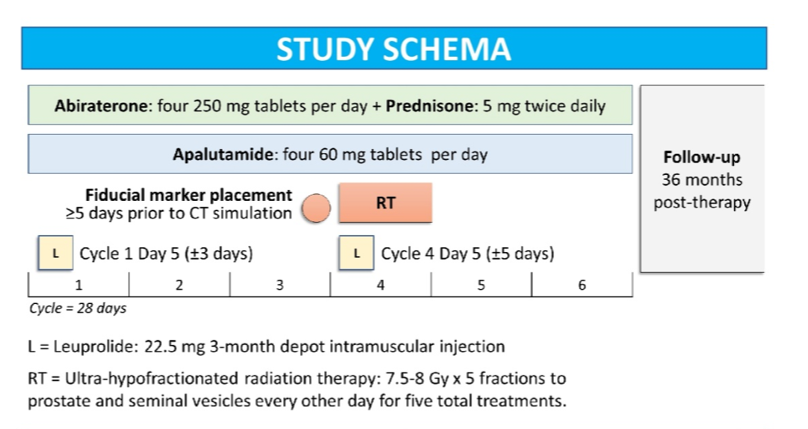 The primary endpoint was BCR defined as nadir PSA + 2ng/mL. In this presentation, the authors report on biochemical recurrence-free survival (bRFS). The study was powered based on a hypothesized reduction in BCR from 25% to 10% at 3 years which would require 53 pts to provide a power of 0.84 and an alpha of 0.03. The authors defined undetectable PSA as <0.10 ng/mL and non-castrate testosterone (T) as a post-treatment value >150 ng/mL. All analyses were performed based on the intention-to-treat and toxicity and health-related quality of life measures were evaluated using CTCAEv4.0 and the EPIC-26 questionnaire.

The median follow-up for patients without BCR was 30 months (range, 15-44). Seven patients had biochemical recurrence during the study period. 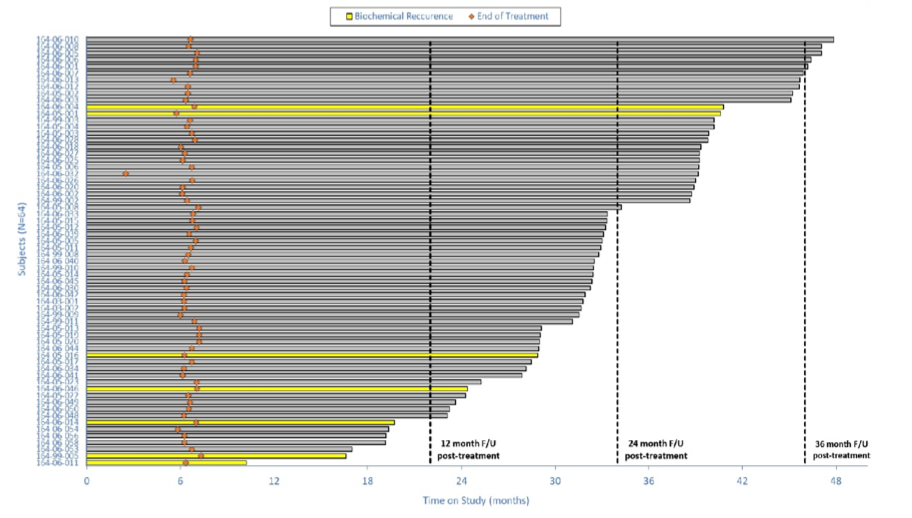 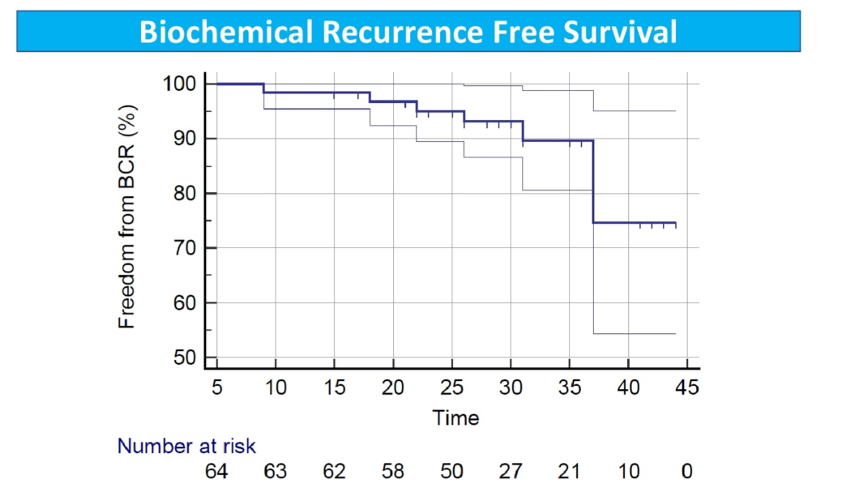 A subset of 21 patients had patient-reported functional outcome data available. While there was a statistically significant decline in urinary function, urinary function scores remained relative higher and there were no significant changes in bowel, sexual, or hormonal function though sample size constraints limit the veracity of conclusions that can be drawn from these data.

In terms of toxicity, 15 patients had transient Grade 3 toxicities: 12 (18.8%) patients who had hypertension and 3 with rash (4.7%). EPIC-26 scores were available for 21 patients which showed significant declines in sexual and hormonal, but not urinary or bowel, function.

The authors conclude that this intensified approach with apalutamide, abiraterone acetate, prednisone, and leuprolide for 6 months in conjunction with hypofractionated radiotherapy was associated with favourable biochemical control and reasonable tolerability in men with very high risk prostate cancer, compared to historical controls treated with long durations of ADT. Thus, this approach warrants further, randomized evaluation.

Related Content: ASCO 2021: Is There a Role for Systemic Therapy Intensification With Radiotherapy in Locally Advanced Prostate Cancer?