(UroToday.com) The 2021 American Society of Clinical Oncology (ASCO) meeting included a session discussing the application of genomic testing treatments for patients with prostate cancer, including a presentation by Dr. Edward Schaeffer discussing the urology perspective of applying precision health to high-risk, localized disease.

To summarize his discussion of family history, Dr. Schaeffer notes:

Dr. Schaeffer notes that there are rare pathologic variants associated with increased risk of prostate cancer, including BRCA1, BRCA2, Lynch Syndrome (MSH 1, 2, 6), and HoxB13. For BRCA1, a meta-analysis suggests a moderate association between BRCA1 mutations and prostate cancer risk, with a pooled odds ratio of 1.35 (95% CI 1.03-1.76)1. The same meta-analysis assessing BRCA2 notes that the association between this mutation and prostate cancer has a pooled odds ratio of 2.64 (95% CI 2.00-3.45). EMBRACE is a UK-based cohort study of BRCA1/2 carriers identified in clinical genetic centers in the UK and Ireland starting in 1998 (n=376 BRCA1, n=447 BRCA2). This population has been prospectively followed with variable screening regimens for prostate cancer, with BRCA1 and BRCA2 carriers having increased standardized incidence ratios of being diagnosed with prostate cancer compared to the general population. However, when compared to men in the ERSPC, BRCA2 carriers had an increased risk of prostate cancer, whereas BRCA1 carriers did not.

Lynch Syndrome results in non-polyposis colon cancer, however, there are extra-colonic sites that are affected, including urothelial and renal diseases. Several studies have also suggested that there may be an increased risk of prostate cancer among those with Lynch Syndrome, specifically those with MMR mutations, however, most people believe that additional studies are required before routine intense screening occurs for prostate cancer for Lynch Syndrome patients. HoxB13 is a developmental gene-regulating androgen receptor target that is associated with earlier onset prostate cancer, but there has been no association with more aggressive disease.

Single nucleotide polymorphisms (SNPs) are associated with an increased risk of prostate cancer, and multiple studies have described prostate cancer-associated SNPs. Additionally, several of these studies have demonstrated that the integration of SNPs with PSA-based screening can improve an individual’s relative cancer risk. In a multi-ancestry meta-analysis of prostate cancer genome-wide association studies, including 107,247 cases and 127,006 controls, Conti et al.2 identified 86 new genetic risk variants independently associated with prostate cancer risk, bringing the total of known risk variants to 269. The top genetic risk score (GRS) decile was associated with odds ratios that ranged from 5.06 (95% CI, 4.84–5.29) for men of European ancestry to 3.74 (95% CI, 3.36–4.17) for men of African ancestry. Men of African ancestry were estimated to have a mean GRS that was 2.18-times higher (95% CI, 2.14–2.22), and men of East Asian ancestry 0.73-times lower (95% CI, 0.71–0.76), than men of European ancestry: 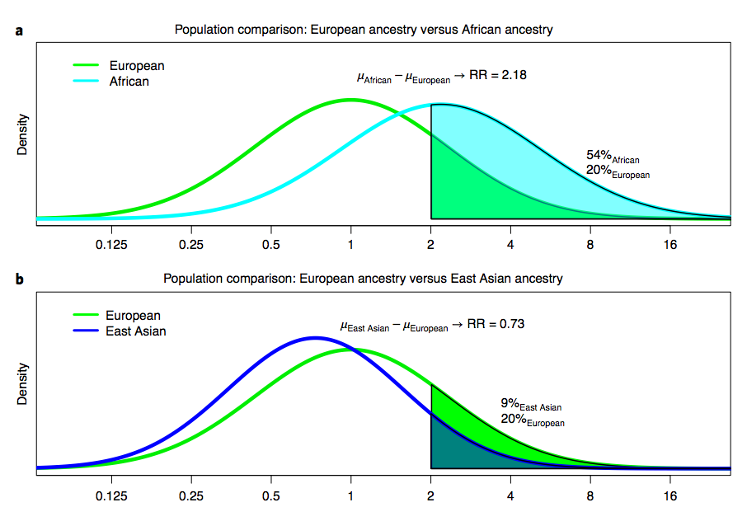 Retrospective series of outcomes of patients with BRCA1/2 mutations generally have a limited number (<100 men) of germline BRCA1/2 cases. These men are generally more likely to have a higher grade and stage of disease and more likely to have pathologic lymph nodes and metastases at diagnosis than prostate cancer non-carriers. Although active surveillance is generally very safe for men with low-risk disease, the safety of surveillance in men with rare pathologic variants has been questioned. Among 1,211 men on active surveillance, Carter et al.3 found that 289 patients experienced grade reclassification, including 11 of 26 with mutations in a three-gene panel and 278 of 1185 noncarriers (HR for reclassification 1.96, 95% CI 1.004-3.84). Additionally, reclassification occurred in six of 11 carriers of BRCA2 mutations and 283 of 1200 noncarriers (HR 2.74, 95% CI 1.26-5.96).

Dr. Schaeffer concluded his presentation with the following take-home messages: