(UroToday.com) Treatment paradigms for patients with metastatic hormone-sensitive prostate cancer (mHSPC) have changed dramatically in the past 4 years. Before 2016, there were no agents with a demonstrated overall survival benefit in this disease space. As a result, for nearly 20 years, there was no appreciable improvement in survival for men diagnosed with mHSPC. However, since 2016, phase III randomized controlled trials have demonstrated a survival benefit for the use of docetaxel (CHAARTED and STAMPEDE), abiraterone acetate (LATITUDE and STAMPEDE), enzalutamide (ENZAMET), and apalutamide (TITAN).

The ARCHES trial was initially presented at the 2019 ASCU GU Cancers symposium, with coverage in UroToday. While overall survival data are immature, radiographic progression-free survival was significantly improved (hazard ratio 0.39, 95% confidence interval 0.30 to 0.50) for patients who received enzalutamide and ADT as compared to ADT alone.

Follow-up data from the CHAARTED trial have demonstrated that the extent of metastatic disease significantly modifies the benefit of the use of docetaxel in patients with mHSPC. In a Poster presentation at the 2020 American Society of Clinical Oncology Virtual Annual Meeting, Dr. Shore and colleagues presented their analysis examining how the pattern of metastatic spread impacts the efficacy of ENZA + ADT in patients enrolled in ARCHES.

The methodology of the ARCHES trial has previously been reported in their initial presentation and publication. To summarized, Patients with mHSPC were randomized 1:1 to enzalutamide (160 mg/day) + ADT or placebo + ADT. Randomization was stratified by extent of disease (volume) and by prior docetaxel treatment.

The analysis presented at the ASCO Virtual Annual meeting represents a post hoc analysis performed by the pattern of metastatic spread at study entry.

Among 1150 patients included in the initial analysis of the ARCHES trial, 1146 had known metastasis at the time of screening. Among these patients, 513 had bone metastases only, 351 had bone and soft-tissue metastases, 154 patients had soft tissue metastasis or were M0, and 128 had visceral metastasis either with or without bony disease.

As shown in the Table, the addition of enzalutamide to ADT resulted in significant improvements in radiographic progression-free survival in men with bone only disease and bone and soft tissue disease. For patients with soft tissue only or M0 disease, there was a non-significant benefit while those with visceral disease (with or without bony disease) did not appear to derive an rPFS benefit. 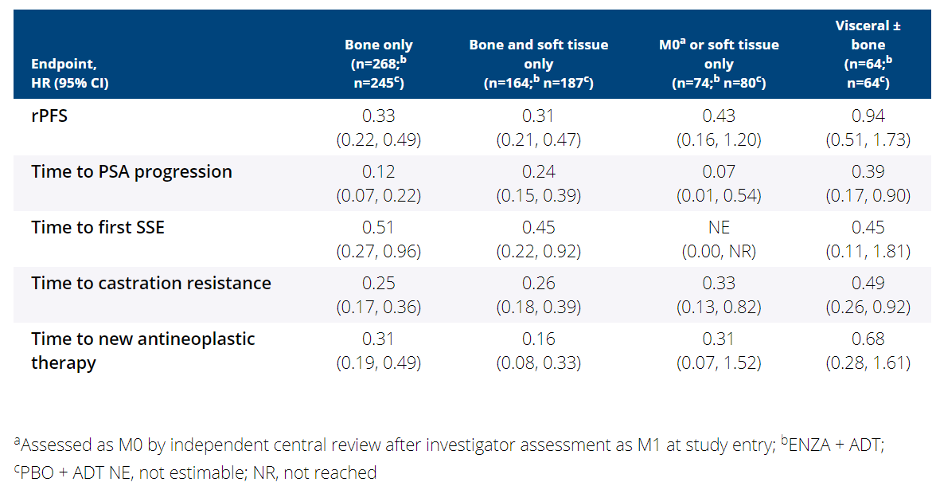 Unfortunately, the authors did not present a test for heterogeneity to assess whether the distribution/burden of disease significantly modified the benefit of addition enzalutamide to ADT, though qualitatively it appears that this is true.

Analyses of other secondary endpoints yielded similar conclusions, supporting the observation that the addition of enzalutamide was most beneficial in patients without visceral disease.