The 2011 report on the occurrence and patterns of health care-associated infections (HAIs) is the fourth to be released by the Pennsylvania Department of Health (PADOH) since the passage of Act 52 in 2007. The overall findings for 2011 show a continued pattern of steady decline in the incidence of HAIs in Pennsylvania. Declines were also seen in the incidence of each of the three categories of HAIs used by PADOH for hospital benchmarking. These categories are: catheter-associated urinary tract infections (CAUTIs), central line-associated bloodstream infections (CLABSIs), and selected types of surgical site infections (SSIs). The declining numbers are likely the result of ongoing efforts undertaken by infection preventionists, health care providers and systems, professional societies and governmental agencies to control and prevent HAIs. The impact of these efforts should be improved health status and outcomes of patients cared for in Pennsylvania hospitals, which are the primary motivation for HAI prevention and control, along with reduced health care expenditures. 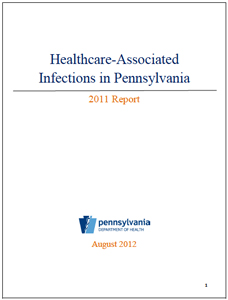