The word “catheter” comes from Greek, meaning “to let or send down.” Catheters were used as early as 3,000 B.C. to relieve painful urinary retention. In those times, many materials were used to form a hollow catheter shape, including straw, rolled up palm leaves, hollow tops of onions, as well as, gold, silver, copper, brass, and lead.

Malleable catheters were developed in the 11th century. In time, silver was used as the basis of catheters as it could be bent to any desired shape and was felt to have an antiseptic function. 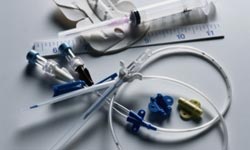 Benjamin Franklin, the inventor and colonial statesman, fashioned silver catheters for use by his older brother John. John suffered from kidney stones and needed to undergo a daily ritual of placing a bulky metal catheter into his bladder. To make these daily requirements on his brother less painful, Franklin worked with his local silversmith on his design for a flexible catheter. "It is as flexible as would be expected in a thing of the kind, and I imagine will readily comply with the turns of the passage," he wrote to John. Holes were bored into the sides of the catheter to allow for drainage.

Coudé tip catheters were developed in the 18th and 19th centuries to facilitate male catheterization and continue to be used for this purpose in current medical practice. Catheters made from rubber were developed in the 18th century but were weak at body temperature, leaving debris in the bladder. The advent of rubber vulcanization, by Goodyear in 1844, improved the firmness and durability of the catheter, and allowed for mass production. Latex rubber became available in the 1930s. Dr. Frederic E.B. Foley (a St. Paul urologist) introduced the latex balloon catheter at a urologic meeting in 1935. Though he lost a legal battle with Davol for the patent, this catheter has since been known as the “Foley.” The earliest self-retaining catheters had wing tips (called Malecot) or flexible shoulders (called Pezzer), and were tied to the male penis or sutured to the female labia.

Charriere’s French scale was used to describe the external diameter of a catheter. Thus the term “French (Fr)” size was coined. Joseph-Frederic-Benoit Charriere was a 19th century Parisian maker of surgical instruments. A 12 French catheter is approximately 4 mm in external diameter (0.33 mm = 1 French [Fr]). In French-speaking countries, these catheters may be referred to as the Charriere or abbreviated Ch. Catheterization of the bladder was felt to be fairly safe because of the antiseptic principles of Lister (1867). But many physicians continued to be concerned about catheter-related infections as patients were still developing “catheter fever” (systemic infection) despite antiseptic principles.

After World War II, Sir Ludwig Guttman introduced the concept of sterile intermittent catheterization in patients with spinal cord injury after World War II. For many years, sterile technique was used for catheterization. In 1971, Dr. Jack Lapides of the University of Michigan at Ann Arbor introduced the clean intermittent catheterization technique. Dr. Lapides’ theory was that bacteria weren’t the only cause of infection. He believed that chronic stagnant urine residuals and overstretching of the bladder were also responsible. But the fact that CIC was not performed in totally sterile conditions, Dr. Lapides still felt it was superior to indwelling catheters. Initially, Lapides was scorned in the urology world. Three decades after this debate, clean intermittent catheterization remains the preferred method to treat chronic urine retention and neurogenic bladder. Recent regulatory changes have recommended against the reuse of catheters for IC in an attempt to further reduce the risk of catheter-associated urinary tract infections.