This website uses cookies to ensure you get the best experience on our website. Privacy Policy
Published 20 September 2020
(UroToday.com) In 2016, Pritchard and colleagues reported that mutations in DNA-damage repair genes, particularly homologous recombination repair genes, were relatively common among patients with advanced metastatic castration-resistant prostate cancer (mCRPC). This opened the potential for targeted therapy: poly(adenosine diphosphate [ADP]-ribose) polymerase (PARP) inhibitors lead to an accumulation of DNA single-stranded breaks which have particularly profound clinical consequences for patients who lack standard homologous recombination repair mechanisms as a result of mutations in important genes in this pathway, including BRCA1 and BRCA2.

Early data supporting the use of the PARP inhibitor olaparib from the TOPARP-A trial found improvements in progression-free and overall survival in men with heavily pre-treated mCRPC. Similar results were observed in the phase II TOPARP-B trial.

Subsequently, the phase III PROfound study demonstrated improved progression-free survival for men with homologous recombination repair-deficient mCRPC following treatment with abiraterone acetate or enzalutamide administered at the time of non-metastatic castrate-resistant prostate cancer or at the time of metastatic castrate-sensitive prostate cancer who received olaparib, as compared to a switch in novel oral androgen-axis targeting agent. These data were presented and published in Spring 2020. 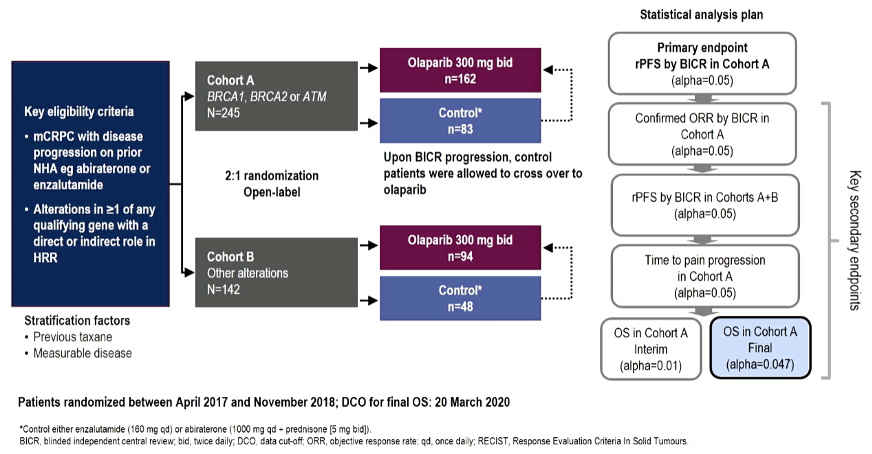 The primary analysis assessed progression-free survival in Cohort A and, as alluded to above, demonstrated improved progression-free survival among these patients. Preliminary analysis of overall survival at the time of initial publication suggested benefits in overall survival (hazard ratio 0.64, 95% confidence interval 0.43 to 0.97, p=0.02 with an alpha significance threshold of 0.01 based on alpha-spending function) but were not conclusive due to data immaturity (data maturity 38%).

In an oral presentation at the Second Presidential Symposium at this year’s European Society of Medical Oncology (ESMO) 2020 Virtual Annual Meeting, Dr. Mateo presented the overall survival analysis of the PROfound study.

Notably, among patients randomized to initial androgen axis targeting agent switch, 67% of those in Cohort A and 66% of those in the overall cohort crossed over to olaparib.

Within Cohort A, the effect of olaparib versus androgen axis targeting agent switch was consistent across pre-specified subgroups, with effect measures all falling within the 95% confidence interval of the overall analysis. 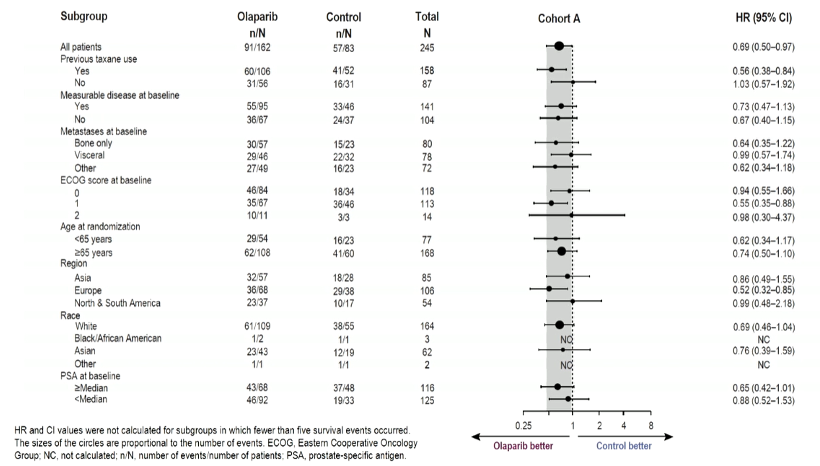 The authors then performed sensitivity analysis assessing for the effect of cross-over. This analysis demonstrated an even larger benefit to the use of olaparib (hazard ratio 0.42, 95% confidence interval 0.19 to 0.91).

In the pooled population of patients in Cohort A and B, there was improved overall survival but this was both diminished in magnitude and not statistically significant (hazard ratio 0.79, 95% confidence interval 0.61 to 1.03). Sensitivity analysis accounting for cross-over yielded a somewhat larger, though still non-significant, effect estimate (hazard ratio 0.55, 95% confidence interval 0.21 to 1.06).

The authors performed exploratory analysis on a gene-level. This demonstrated that the benefit of olaparib is predominately realized by patients with mutations in BRCA1 and BRCA2. 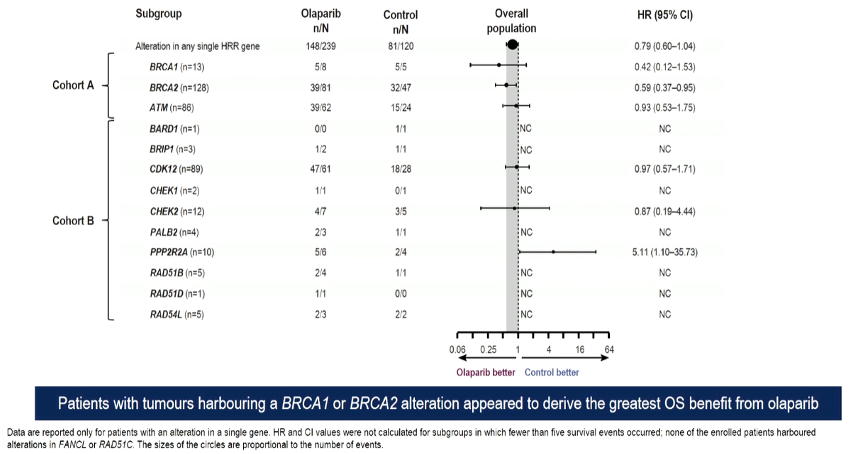 There were no new safety signals identified compared to the previously published primary analysis. Anemia was the most common reason for dose reduction or cessation and the only common serious adverse event (grade 3 or greater).

In conclusion, Dr. Mateo highlighted that there is evidence of significantly improved overall survival for men with mCRPC and mutations in BRCA1, BRCA2, or ATM who receive olaparib following progression on abiraterone acetate or enzalutamide, despite significant rates of cross-over.

Watch: Patients with mCRPC Can Be Preselected to Maximize Potential Benefit of Olaparib - Maha Hussain