He began by laying out a number of important topics to consider:
1. study population: is this representative of patients seen in the clinic today?
2. control group: are these patients getting the best treatment available?
3. cross over: how does this affect the interpretation of overall and progression-free survival?
4. biomarker: are these relevant and measured in the most appropriate way?
5. primary endpoint: is this achieved according to a pre-specified analytic plan?
6. quality of life: are patients living both longer and better as a result of these treatments?

Beginning with IPATential150, Dr. Grönberg highlighted that the patient population represents a common population and control patients receive an approach (abiraterone acetate and prednisone) which is considered standard of care in this disease space (first-line therapy for metastatic castration-resistant prostate cancer, mCRPC). However, he noted that only a relatively small proportion (~18%) of enrolled patients had received docetaxel previously, much less than would be expected in current clinical practice.

Dr. Grönberg highlighted that, in the intention-to-treat population, the difference in radiographic progression-free survival between the two arms was 2.6 months with a stratified p-value of 0.0431, thus failing to meet the primary endpoint defined a priori based on alpha = 0.01. In contrast, in the PTEN-loss group, the difference in radiographic progression-free survival was 2.0 months, though this was statistically significant based on a stratified p-value of 0.0335, with a pre-specified threshold of alpha = 0.04.

Dr. Grönberg noted that, among subgroup analyses of the PTEN-loss population in which an overall benefit was observed, patients who had prior taxane-based chemotherapy did not appear to derive benefit from the addition of ipatasertib to abiraterone acetate and prednisone, with a hazard ratio of exactly 1.00. As highlighted above, this is a subgroup that, compared to clinical practice today, is underrepresented in this study cohort. 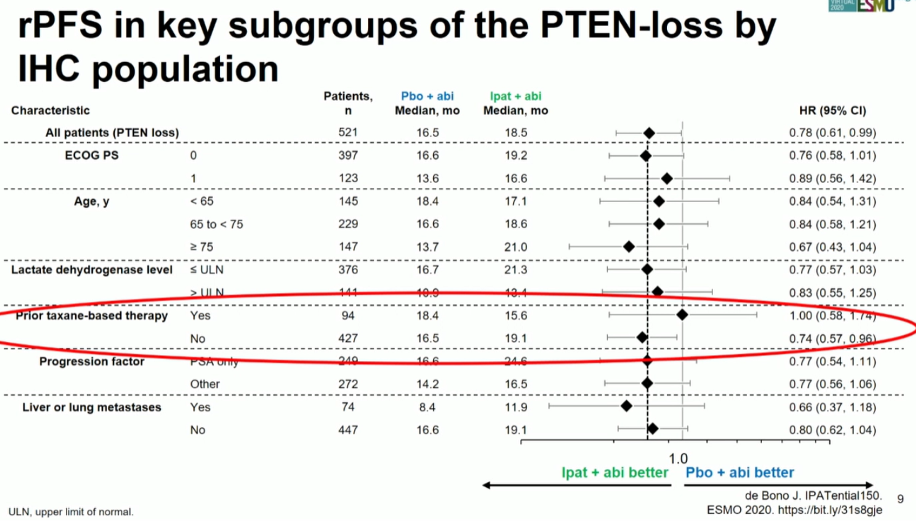 Moving to overall survival, this analysis demonstrated no difference though these data are immature.

He then highlighted the assessment of radiographic progression-free survival in the sub-population with PTEN-loss defined according to next-generation sequencing. Using these data, he highlighted that the definition of biomarkers is very important. He postulated that NGS is a better way to define PTEN-loss.

He then moved to Dr. Mateo’s presentation of the final overall survival analysis of the PROfound study. Dr. Grönberg first highlighted that the patient population is one of clinical relevance as first-line use of androgen axis targeting agents in mCRPC is common and subsequent progression is to be expected. However, he drew concerns regarding the appropriateness of the treatment administered to patients in the control arm: to be eligible for this trial, patients must have progressed on one or both of abiraterone acetate or enzalutamide; previous work has demonstrated that both PSA responses (<10%) and response rates (<5%) are very low with a switch in androgen axis targeting agent. Thus, this control arm is receiving inadequate and ineffective treatment. A more appropriate comparison would be the use of cytotoxic chemotherapy.

Dr. Grönberg highlighted that cross-over in the PROfound study was common and that this makes an assessment of overall survival somewhat more difficult. He felt that the authors had made a good attempt at managing this.

As highlighted in Dr. Mateo’s presentation, primary analysis in Cohort A among patients with mutations in BRCA1, BRCA2, or ATM demonstrated statistically significant improvements in overall survival for those patients receiving Olaparib. However, in Cohort B, there was quite profoundly negative results with, in his words, either “very small or no” benefit to Olaparib in these patients.

Highlighting data from the exploratory gene-level analysis, he emphasized that Olaparib appears beneficial among men with mutations in BRCA1 and 2 but likely not any of the other 13 genes included in this patient cohort, and in the United States (US) Federal Drug Administration (FDA) approval. 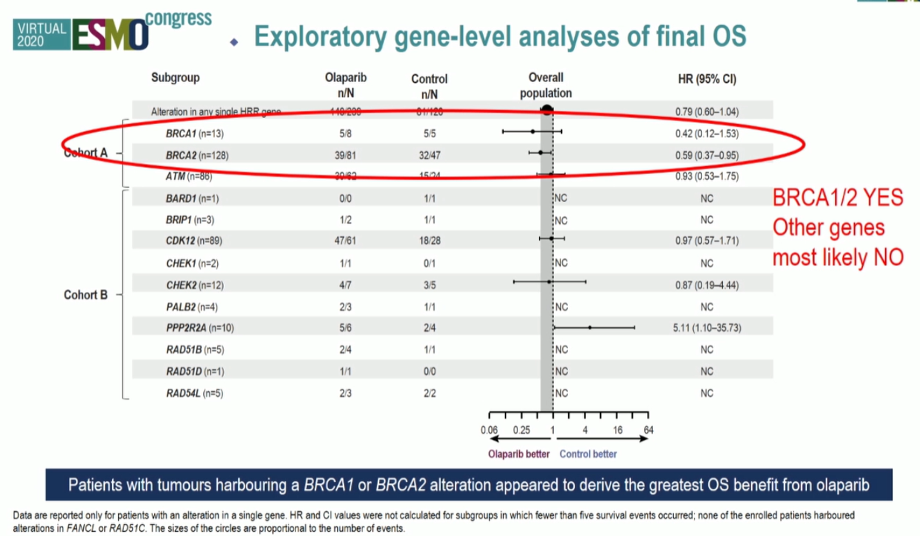 Dr. Grönberg highlighted that the PROfound trial results published and presented to date do not present quality of life data, crucial information to judge clinical benefit.

He closed by highlighting a few personal reflections. First, that biomarker-guided treatment is likely the future. However, in designing trials, it is critical that standard of care is utilized as the control arm to ensure that (1) we are offering the best possible care to patients who volunteer to participate in trials and (2) we generate the most clinically relevant data. As an example, he highlighted the design of the STAMPEDE trial with an evolving standard of care comparison. He further highlighted the utility of novel study designs including platform trials. This approach has been very successful in the assessment of treatments for COVID-19. Such approaches allow the testing of multiple treatments against standard of care. Finally, he suggested that we should be restrictive in cross-over particularly in the later stages of disease.

Reflecting on the two presented abstracts, he concluded that he found the data on ipatasertib from IPATential150 to be promising among the NGS-defined subgroup but too early for clinical practice. With respect to the data from PROfound on the use of olaparib, he concluded that he would likely use this approach in patients with BRCA1 or BRCA2 mutations who had received standard of care with androgen axis targeting agents and taxes. In patients lacking these two mutations, he suggested that he would not use olaparib given the lack of benefit demonstrated I the analysis of Cohort B and the exploratory gene-level analysis.