Darolutamide is a structurally distinct and highly potent androgen receptor inhibitor. Like apalutamide and enzalutamide, a randomized clinical trial of darolutamide (ARAMIS, NCT02200614) demonstrated significantly increased median metastasis-free survival by ̃2 years and improved overall survival in men with non-metastatic castration resistant prostate cancer (nmCRPC), with a favorable tolerability profile. The authors performed a post-hoc analysis of ARAMIS to evaluate the association between metastatic progression with prostate-specific antigen (PSA) and clinical progression and to describe the distribution of metastatic progression between groups.

As previously described, the ARAMIS trial enrolled patients with high-risk nmCRPC who were randomized in a 2:1 fashion to darolutamide (n=955) or placebo (n=554) while continuing androgen-deprivation therapy. The authors performed descriptive analyses using the primary data cutoff of September 3, 2018, utilizing the double-blind period of the ARAMIS trial. Following baseline, patients underwent conventional radiographic imaging every 16 weeks which was centrally reviewed. PSA and pain progression were defined per primary analysis. 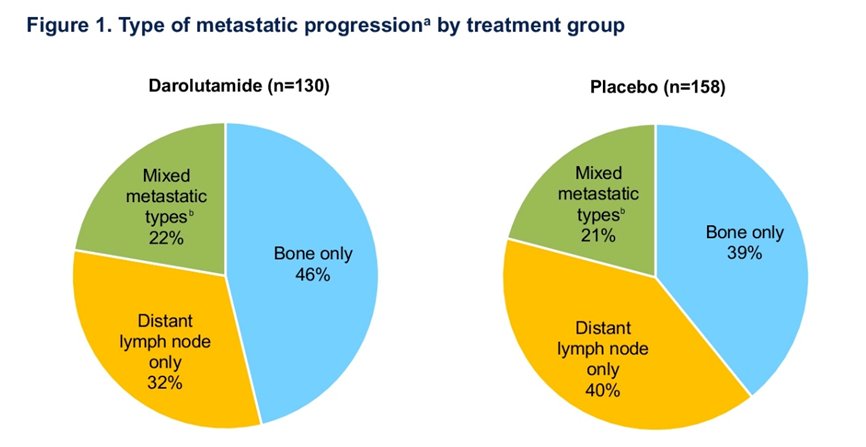 Those patients with radiographic progression had shorter median time from initial diagnosis to study treatment, compared to the overall ARAMIS population both among those treated with darolutamide (72.9 vs 86.2 months) and those randomized to placebo (74.4 vs 84.2 months). Of all patients with metastatic progression, baseline PSA levels (ng/mL) were similar between those randomized to darolutamide (12.6) and placebo (15.1).