(UroToday.com) There has been rapid evolution in treatment options for patients with non-metastatic castration-resistant prostate cancer since the spring of 2018. Up until the presentation of SPARTAN and PROSPER trials, reporting on the use of apalutamide and enzalutamide in non-metastatic castration-resistant prostate cancer, at GU ASCO in February 2018, there were no specifically approved treatment options for these patients. These agents, as well as darolutamide (on the basis of data from ARAMIS), were subsequently approved on the basis of demonstrated improvements in metastasis-free survival. Briefly, darolutamide is an androgen receptor inhibitor with a structure distinct from apalutamide and enzalutamide.

Subsequently, further follow-up of SPARTAN, PROSPER, and ARAMIS has demonstrated a significant improvement in overall survival as well. As a result of the treatment benefit of darolutamide demonstrated in the primary analysis of metastasis-free survival, patients underwent unblinding. As a result, there was cross-over of 170 patients from placebo to darolutamide. In plenary abstract presentation in the Poster Highlights Session: Prostate Cancer - Localized Disease session at the 2021 American Society of Clinical Oncology Genitourinary (Cancers Symposium (ASCO GU), Dr. Shore and colleagues presented an analysis examining the effect of crossover on the overall survival benefit seen in ARAMIS.

The methodology of the ARAMIS trial has been previously reported in the initial publication of this trial as well as in updates. To briefly summarize, the authors accrued 1509 patients with nmCRPC who were subsequently randomized 2:1 to darolutamide 600 mg twice daily (n=955) or PBO (n=554). All patients continued ADT. The trial was designed and powered to assess the primary outcome of metastasis-free survival. 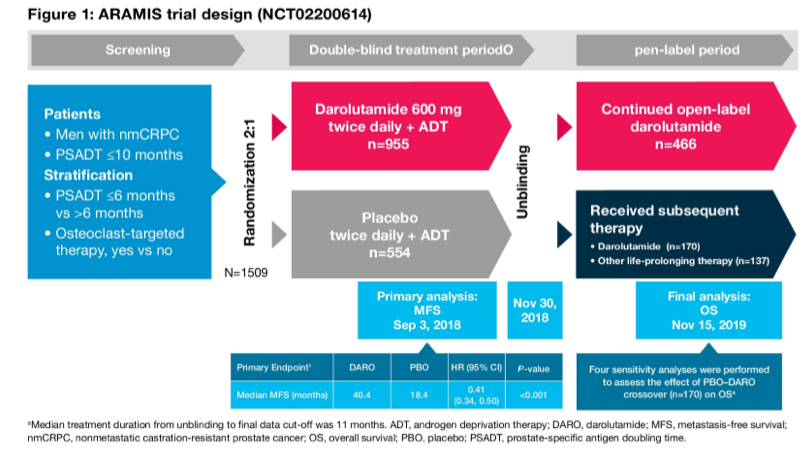 In addition to overall survival, other secondary endpoints included times to pain progression, first cytotoxic chemotherapy, first symptomatic skeletal event, and safety. The overall survival analysis was planned to occur after approximately 240 deaths, with hierarchical assessment. To account for the treatment effect of crossover from placebo to darolutamide, iterative parameter estimation (IPE) and rank-preserving structural failure time (RPSFT) analyses were performed. The IPE method used a parametric model for the survival times and iteratively determined the model parameter describing the magnitude of the treatment effect, whereas a grid search and non-parametric log-rank test were used for the RPSFT analysis. The IPE and RPSFT analyses both generated a Kaplan–Meier curve for the PBO arm that predicts what would have been observed in the absence of placebo to darolutamide crossover.

As mentioned above, 170 pts underwent cross-over from placebo to darolutamide (30.7% of those randomized to PBO); median treatment duration from unblinding to the final data cut-off was 11 months.

The final analysis of the combined double-blind and open label periods was conducted after 254 deaths, occurring in 15.5% of patients receiving darolutamide and 19.1% of those randomized to receive placebo. This analysis showed a statistically significant OS benefit for darolutamide (HR 0.69; 95% CI 0.53–0.88; P = 0.003). 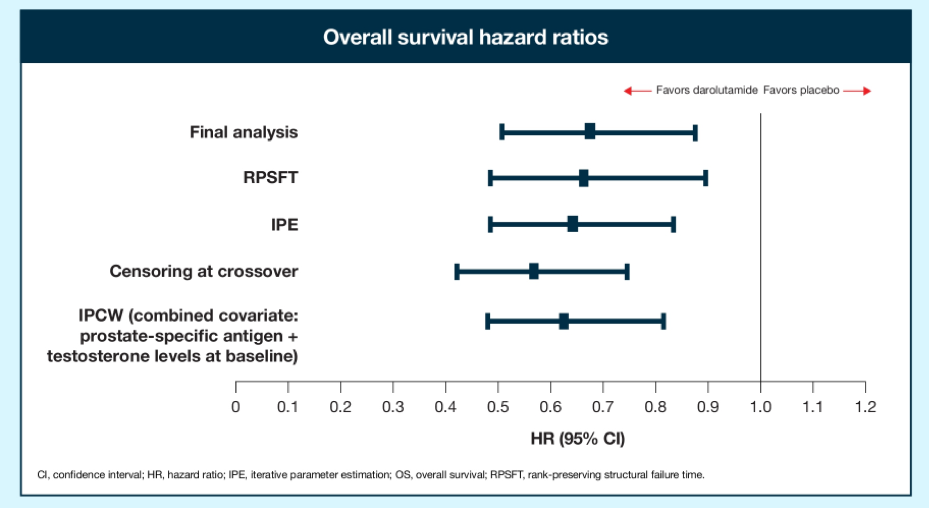 No new toxicity signals were detected and, thus, the authors concluded that early treatment with darolutamide in nmCRPC is associated with significant improvements in overall survival regardless of cross-over.