BERKELEY, CA (UroToday.com) - TGFβ superfamily members play a fundamental role in many cell functions, including cell migration, survival, proliferation, and differentiation. The specific role of TGFβ in cancer is highly controversial. TGFβ is a known potent inhibitor of proliferation in epithelial and lymphoid cells and hence considered to have a tumor suppressive role. However, the exact role of TGFβ signaling in tumor development appears to be complex and is context dependent. Recent studies have shown that ablation of TGFβ signaling results in enhanced tumor growth. On the other end, TGFβ has also been implicated in eliciting tumor-promoting effects through its ability to induce epithelial-to-mesenchymal transition (EMT), motility, survival, invasion, immunosuppression, and metastasis.

These controversies demand extensive research on TGFβ signaling in cancer, with specific effects on the tumor and stromal cells. Presence of multiple isoforms, differential effects on various cell types, source of cytokine in a specific tumor tissue, stage of tumor growth, varied effects in the presence and absence of other growth factors, etc. influence the total outcome. Hence, individual analysis on the specific effects of TGFβ isoforms on tumor and stromal cells is essential to address the existing discrepancies on the role of TGFβ signaling in cancer.

In light of studies demonstrating both tumor-suppressive and tumor-promoting effects of TGFβ, we sought to determine the specific effects of TGFβ1, major TGFβ isoform on the survival, proliferation, and foci formation of invasive prostate (PC3) and bladder (T24) cancer cell lines in vitro and characterize the underlying mechanisms regulating the process. We report that TGFβ1 inhibits invasive prostate (PC3) and bladder (T24) cancer cell proliferation, survival and foci formation, and induced apoptosis in vitro in a dose- and time-dependent manner via activation of p38 MAP kinase and JNK, subsequently leading to the cleavage of caspases 9, 8 and 3. We also demonstrate the Akt-independent effects of TGFβ on prostate and bladder cancer cell survival and apoptosis. Although physiological and clinical implications of these effects induced by TGFβ1 in prostate and bladder cancer cells is yet to be determined in vivo, our study provides supportive evidence that TGFβ1 plays a direct tumor-suppressive role on invasive prostate and bladder cancer cells via inducing apoptosis and inhibiting cell proliferation.

We postulate that TGFβ1 pathway may be utilized for specifically targeting prostate and bladder cancers without inflicting side effects on normal tissues. 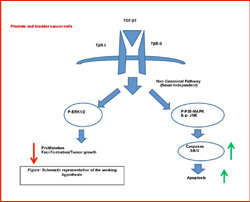 Written by:
Ahmad Al-Azayzih, PharmD and Payaningal R. Somanath, PhD as part of Beyond the Abstract on UroToday.com. This initiative offers a method of publishing for the professional urology community. Authors are given an opportunity to expand on the circumstances, limitations etc... of their research by referencing the published abstract.