Prostate cancer exhibits a wide spectrum of disease behavior. Despite the majority of cases presenting with relatively indolent biologic behavior, prostate cancer remains the second leading cause of cancer-related death in the United States, behind only lung cancer.1 With current treatment paradigms, nearly all patients who die of prostate cancer first receive androgen-deprivation therapy and then progress to castrate-resistant prostate cancer. 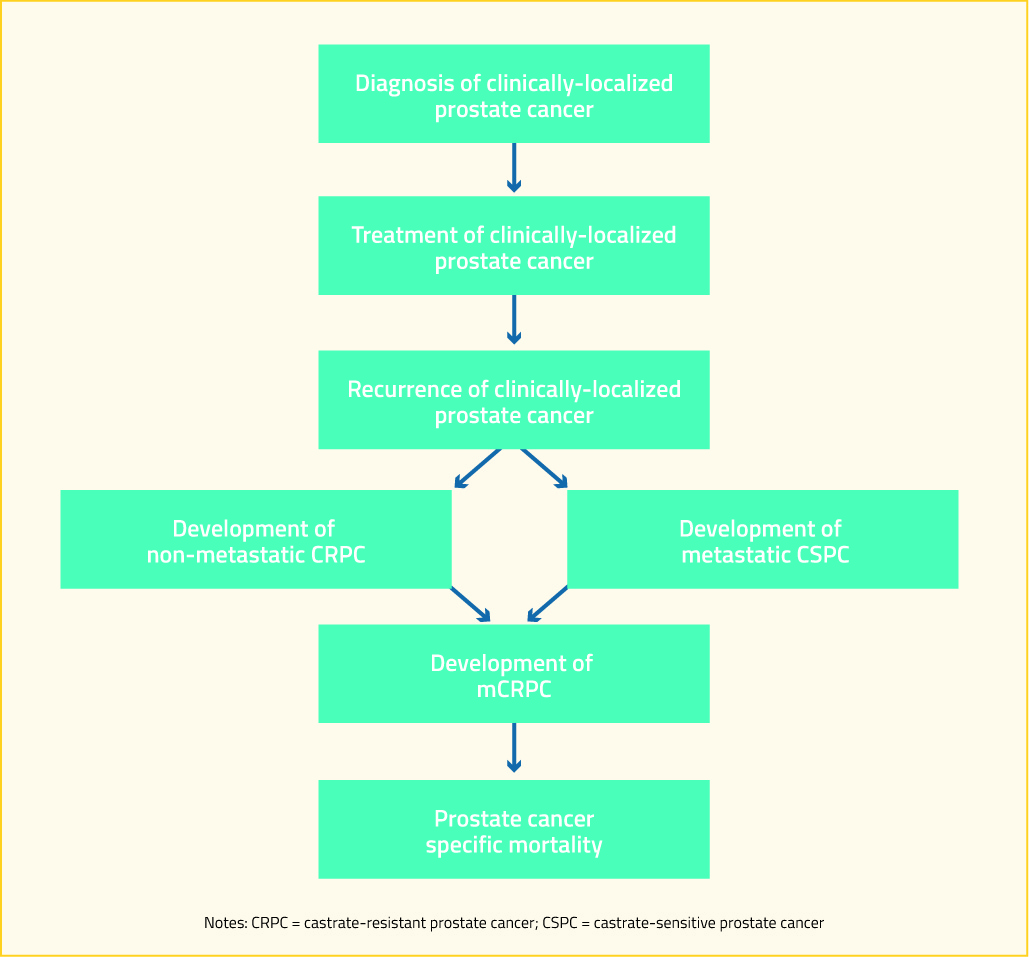 The clinical approach to patients with metastatic castrate-resistant prostate cancer (mCRPC) depends, in general terms, on three factors: whether the patient is symptomatic from their disease, the patient’s performance status, and previous therapies which the patient may have received. These factors have been used to guide treatment recommendations in the guidelines from many medical/urologic societies. The definition of “symptomatic” prostate cancer is somewhat imprecise. However, most consider that patients who require only acetaminophen or non-steroidal anti-inflammatory drugs (NSAIDs) to be minimally symptomatic while those who require regular narcotic medications for pain that is attributable to documented metastasis are deemed symptomatic.

Advanced androgen axis targeting agents (such as abiraterone and enzalutamide) and chemotherapeutics (such as docetaxel) are increasingly used earlier in the disease process, including in de novo metastatic castrate-sensitive prostate cancer and in non-metastatic castrate resistant prostate. While there is some evidence that re-challenge with docetaxel may provide benefit in patients who previously demonstrate docetaxel response, 2, 3 the use of advanced androgen axis targeting agents and docetaxel earlier in the disease trajectory may preclude their use at the development of mCRPC. Acknowledging the changes this utilization has on the treatment of mCRPC, this article will focus on guideline-recommended treatment options.

As the androgen axis continues to be important in patients who have developed castration resistance, ongoing continuous treatment with androgen-deprivation therapy is recommended.4 Historically, a number of secondary hormonal maneuver have been employed. However, routine use of these preceded the availability of therapies with proven survival benefits. As no secondary hormonal maneuver has been shown to prolong survival, they are not widely recommended. However, there is evidence that, for patients who are currently receiving LHRH agonist or antagonist monotherapy, the addition of androgen receptor antagonists and resulting total androgen blockade is associated with short-term PSA-responses. Conversely, for patients who are currently receiving total androgen blockage, anti-androgen withdrawal is recommended as some patients may experience an antiandrogen withdrawal response.

For patients who are asymptomatic or minimally-symptomatic, have good performance status, and have not yet received docetaxel chemotherapy, there are numerous treatment options. These include docetaxel, abiraterone plus prednisone, enzalutamide, and sipuleucel-T5. Docetaxel was the first agent shown to have a survival benefit in patients with mCRPC in 20046 and it quickly became standard of care for these patients as there were no alternatives with a demonstrated survival benefit. In 2012, COU-AA-302 was the first study to demonstrate a survival benefit for a non-cytotoxic agent in the treatment of mCRPC: patients treated with abiraterone plus prednisone demonstrated approximated 4 months longer overall survival (OS) than those receiving prednisone alone.7 Subsequently, in 2014, the PREVAIL study demonstrated similar benefits for enzalutamide in this patient population.8 Both abiraterone and enzalutamide target the androgen axis. In contrast, sipuleucel-T is an autologous active cellular immunotherapy. Published in 2010, the IMPACT study demonstrated that this approach was associated with approximately 20% improved overall survival.9 For patients who opt against these standard treatments, observation alone, first-generation anti-androgens, or ketoconazole accompanied by steroids may be offered.5 While not included in these guidelines, the FIRSTANA trial compared docetaxel and two doses of cabazitaxel in chemotherapy naïve patients with mCRPC. Overall, no large differences between the regimes were seen with respect to oncologic efficacy or tolerability.10

For patients who have good performance status and have not yet received docetaxel but who are symptomatic (again, based on a definition requiring regular use of narcotic analgesics for the pain that is attributable to documented metastasis), there are again a number of treatment options. Abiraterone plus prednisone, enzalutamide, and docetaxel form the standard of care for these patients. In addition, the alpha-emitter radium-223 may be offered to patients who have symptoms attributable to bony metastatic disease in the absence of visceral disease on the basis of the results of the ALSYMPCA trial. This phase 3 trial demonstrated that treatment with radium-223 significantly improved overall survival as well as skeletal-related events.11  As with asymptomatic or minimally-symptomatic patients who have good performance status and are chemotherapy-naïve, symptomatic patients who decline standard treatments may be offered alternative therapies though these do not have proven survival benefit. In this patient population, these treatments include ketoconazole with steroids, mitoxantrone, or radionuclide therapy.5

Among patients with mCRPC who have previously received docetaxel-based chemotherapy, treatment options may again be stratified by performance status. There are 4 agents with a proven survival benefit in this population: abiraterone plus prednisone; enzalutamide; cabazitaxel; and radium-223. Given that this is a relatively advanced disease state and these treatments remain non-curative and yet have a significant potential burden of toxicity, care should be taken to provide prostate cancer treatments which preserve these patients’ excellent quality of life. It is also at this time that sequencing of agents becomes particularly relevant as many patients will have received an advanced androgen axis targeting agent (abiraterone or enzalutamide) prior to receiving docetaxel and will now be on their third line of mCRPC treatment.

In 2011, the COU-AA-301 trial demonstrated that abiraterone plus prednisone could improve overall survival approximately 4 months for patients with advanced mCRPC following docetaxel chemotherapy.12 Subsequently, in 2012, the AFFIRM trial demonstrated similar results for enzalutamide in this patient population.13 TROPIC tested cabazitaxel versus mitoxantrone, each with prednisone, in patients who had progressed following docetaxel for mCRPC and demonstrated an improvement of approximately 2.5 months overall survival for patients receiving cabazitaxel.14 As discussed previously among patients who had not yet received docetaxel, ALSYMPCA demonstrated an improvement in both survival and skeletal-related events for patients receiving radium-223.11 In addition to these agents, docetaxel re-challenge is suggested for patients who discontinued therapy due to reversible toxicity. The AUA guidelines again offer ketoconazole plus steroids for patients who are unable or unwilling to take other agents.

In patients with advanced mCRPC who are symptomatic and have poor performance status following previous docetaxel chemotherapy, symptom management is strongly advocated in keeping with the American Society for Clinical Oncology’s guidance regarding the treatment of patients with advanced solid tumors. Aggressive treatment at this time may lead to unnecessary cost and toxicity, may delay access to the end of life care, and is unlikely to provide meaningful benefit. Therefore, palliative care is prioritized. Abiraterone plus prednisone, enzalutamide, ketoconazole plus steroid or radionuclide therapy are offered within the AUA guidelines5 but there is no strong data to support the use of these agents in this patient population.

Apart from specific mCRPC medication, bone health remains important in all patients with advanced prostate cancer due to a confluence of risk factors: age-related declines in bone mineral density, the deleterious effects of androgen-deprivation therapy on bones15 (even among patients with localized prostate cancer16), and the involvement of bony metastatic disease. Therefore, calcium and vitamin D are recommended for all patients with mCRPC. In addition, a bone-targeting agent, either denosumab or zoledronic acid, is recommended. These agents have been shown to decrease disease-related skeletal events though, unlike radium-223, they have not been found to improve survival. The timing of initiation of bone-targeted agents is somewhat unclear as there is evidence that the risk of significant toxicity (particularly, osteonecrosis of the jaw) increases substantially after 2 years of therapy17 and may patients with mCRPC will be expected to live longer than this.

Additionally, the symptomatic benefit of palliative radiotherapy should not be underestimated, and this should be offered where it is deemed clinically appropriate.

Special considerations should be undertaken for some patients as these may guide treatment choices. In heavily pre-treated patients with mCRPC, Mateo et al. found that mutations or deletions in DNA-repair genes could be found in 33% of patients.18 These patients demonstrated a notably strong response to treatment with the PARP inhibitor olaparib. A biomarker suite including BRCA 1 and 2, ATM, Fanconi’s anemia genes, and CHECK2 had a specificity of 94% for identifying treatment response. Thus, identification of these defects in DNA-repair may guide treatment choice. More recently, a phase 2 trial demonstrated that olaparib added to abiraterone plus prednisone improved overall survival compared to abiraterone plus prednisone alone in a population of patients who had previously received docetaxel but were not enriched for DNA-repair defects.19

Recently, the phase 3 trial of PROSTVAC, viral vector-based immunotherapy, in chemotherapy naïve patients with asymptomatic or minimally symptomatic mCRPC were reported. Despite promising results in a phase 2 trial where median OS was improved by 8.5 months, this phase 3 trial was unfortunately negative with a non-significant median difference in overall survival of approximately 1 month.20

Despite the survival benefits of many agents in metastatic castrate-resistant prostate cancer, these treatments remain non-curative. Therefore, consideration for enrollment in ongoing clinical trials should be considered for all eligible patients.