(UroToday.com) Following Dr. Morgan’s presentation during the Understanding the Evolving Treatment Landscape in Prostate Cancer: How to Leverage the Latest Advances and Strategies to Optimize Patient Outcomes session at the 2020 Society of Urologic Oncology (SUO) annual meeting,  Dr. Evan Yu presented on the changing landscape of treatment for men with metastatic castration-resistant prostate cancer (mCRPC).

He began emphasizing that he is “extremely enthusiastic about where the field is going” due in part to the fact that “precision medicine has finally arrived for prostate cancer”. Supporting this, he highlighted data from the Stand Up 2 Cancer group demonstrating that 23% of patients with mCRPC harbor either germline or somatic DNA repair mutations (with an approximately 50/50 split between germline and somatic mutations), a finding that was corroborated in work from Pritchard and colleagues who found that 12% of men with mCRPC had germline DNA repair defects. Notably, family history and age at diagnosis were not associated with mutation frequency, though these remain important clinically. These data bring the mechanistic concept of synthetic lethality to clinical application. Based on repair pathways for single-stranded DNA breaks, the use of PARP inhibitors will selectively kill tumor cells with deficient homologous recombination repair mechanisms

In addition to these therapeutic implications, Dr. Yu highlighted the importance of germline genetic testing due to the potential implications for the patient’s family, including siblings and children. He then emphasized that recent National Comprehensive Cancer Network (NCCN) guidelines recommend germline and somatic tumor testing for patients with regional or metastatic disease.

Moving back to therapeutic implications, he highlighted the PROfound trial, which has previously been described in depth. In short, it recruited men with metastatic castrate-resistant prostate cancer who had progressed on previous abiraterone acetate or enzalutamide administered at the time of non-metastatic castrate-resistant prostate cancer or at the time of metastatic castrate-sensitive prostate cancer, many of who had previously been treated with taxane chemotherapy. The investigators then used an investigational assay based on the FoundationOne CDx to identify alterations in one of 15 pre-specified genes involved in homologous recombination repair (BRCA 1/2, ATM, BRIP1, BARD1, CDK12, CHEK 1/2, FANCL, PALB2, PPP2R2A, RAD51B, RAD51C, RAD51D, RAD54L).

The authors used biomarker-driven stratification to derive two study cohorts: Cohort A had alterations in BRCA1, BRCA2, or ATM while Cohort B had alterations in any of the other 15 included genes. In both cohorts, patients were randomized 2:1 toolaparib vs. abiraterone or enzalutamide. Within each biomarker strata, randomization was stratified based on prior taxane use and measurable disease burden (according to RESIST 1.1 criteria).

In cohort A, the study met its primary endpoint, demonstrating improved radiographic progression-free survival for patients receiving olaparib compared to androgen axis inhibitor switch (physician’s choice). While still significant, the effect was small when the whole study cohort was examined. Examining overall survival, there was a statistically significant benefit in cohort A that was not apparent when the whole study cohort was considered.

Considering the toxicity of treatment, Dr. Yu emphasized that data from PROfound are consistent with previous use of PARP inhibitors including myelosuppression, fatigue, anemia, and GI side effects. On the basis of the first report of PROfound, the United States Federal Drug Administration (FDA) approved the use of olaparib for patients with homologous recombination repair defect who progressed following first line therapy with enzalutamide or abiraterone.

Dr. Yu then discussed the TRITON2 and TRITON3 studies examining the role of rucaparib in this disease space. These studies differ in both their methodology, single-arm phase II vs randomized phase III, and study population, following taxane-based chemotherapy and first-line androgen axis inhibition vs as second-line therapy following first-line androgen axis inhibition.

While TRITON3 is ongoing, results from TRITON2 are available. Focussing on the independent review, Dr. Yu highlighted that confirmed objective response rates were seen in approximately 44% of patients.

When assessed according to specific gene alteration, response rates were much lower among patients with non-BRCA mutations with, for example, 11% response in patients with ATM mutations, 11% in those with CHEK2 mutations, and 0% in those with CDK12 mutations. Again, the safety profile of rucaparib in TRITON2 was consistent with previous studies with asthenia/fatigue being common as well as GI side effects, myelosuppression, nausea, and anemia. On the basis of data from TRITON2, rucaparib was approved by the FDA for patients with BRCA1/2 mutations following treatment with on androgen-receptor targeting therapy and taxane-based chemotherapy.

Moving forward, there are a number of ongoing trials assessing the role of PARP inhibitors, either in monotherapy or combination for patients with advanced prostate cancer. Notably, GALAHAD utilizes a more narrow gene panel which is assayed by a ctDNA assay, rather than germline or tumor DNA. Additionally, the MAGNITUDE and TALAPRO-2 studies are being performed in unselected populations, without biomarker enrichment.

Given the potential for either additive or synergistic effects between PARP inhibitors and novel androgen-axis targeting agents or immune checkpoint inhibitors, a number of ongoing trials are assessing combination therapy, predominately in the mCRPC disease space but also in patients with mHSPC who have homologous recombination repair defects (AMPLITUDE trial).

Further, while cabozantinib proved ineffective as monotherapy in patients with mCRPC, the COSMIC-021 trial demonstrated promising results in combination with atezolizumab in this patient population, with a 32% objective response rate. These data led to a randomized phase III design which is currently being tested in the CONTACT-02 trial, randomizing against the physician’s choice of a switch to abiraterone or enzalutamide. Interestingly, this trial will enroll patients with mCRPC who received one prior line of androgen-axis targeting agent across a number of disease spaces including locally advanced disease, mHSPC, nmCRPC, or mCRPC.

Finally, Dr. Yu discussed other potential approaches, highlighting the role of the PTEN inhibitor ipatasertib. This agent, in combination with abiraterone, was tested in the phase III IPATential150 trial. Data from this trial were presented at ESMO 2020. This phase III, double-blind, placebo-controlled, randomized controlled trial assessed ipatasertib in combination with abiraterone acetate and steroid (prednisone/prednisolone) as compared to placebo plus abiraterone acetate and prednisone.

Patients were randomized in a 1:1 fashion to receive ipatasertib (400mg PO daily) in combination with abiraterone acetate (1000mg PO daily) and prednisone (5mg PO BID) or placebo plus abiraterone acetate and prednisone. Randomization was stratified according to PTEN-loss by immunohistochemical assay, receipt of prior docetaxel in the castration-sensitive disease space, progression by PSA alone, presence of visceral metastases, and geographic region.

There is a mechanistic rationale for this treatment approach given evidence of reciprocal activation of the androgen-receptor and AKT pathways. 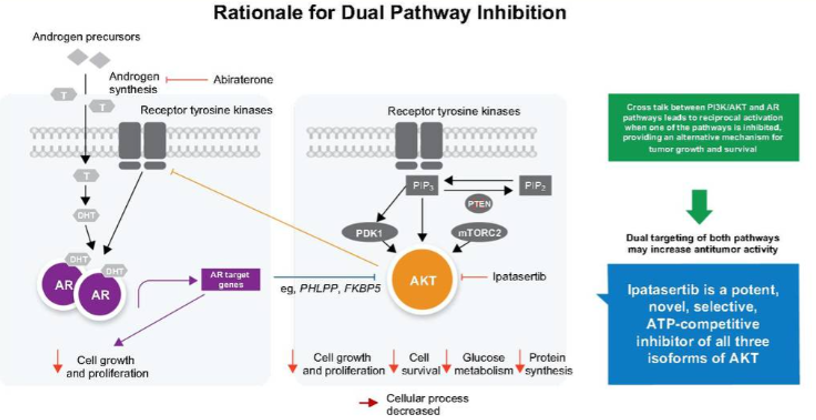 This trial demonstrated improvements in radiographic progression-free survival, particularly among patients with PTEN-loss on immunohistochemistry.