Dr. Morgans began with a presentation examining the changing treatment options for patients with nmCRPC and mHSPC. Focusing first on the nmCRPC space, Dr. Morgans highlighted data from Dr. Matthew Smith’s work utilizing the control arm of a randomized controlled trial of denosumab in this disease space which clearly demonstrated the prognostic value of both absolute prostate-specific antigen (PSA) and PSA doubling time in risk-stratification with respect to the development of metastases. As highlighted in this figure, as both absolute PSA increases and PSA doubling time decreases, there is an increased risk of metastasis. Further, the relationship between PSA doubling time and the metastatic risk appeared to be markedly non-linear with a dramatic increase in risk for patients with PSA doubling time less than 8 months.

These data spurred the study of novel treatment approaches in this disease space. In particular, three next-generation androgen receptor inhibitors, enzalutamide, apalutamide, and darolutamide, have been studied in this disease space. While enzalutamide and apalutamide are structurally very similar, darolutamide is somewhat unique and, clinically, this manifests with low blood-brain barrier penetration.

Dr. Morgans then highlighted the data from the three pivotal phase III randomized controlled trials of these agents (PROSPER of enzalutamide, SPARTAN of apalutamide, and ARAMIS of darolutamide). Generally speaking, these trials were very similar, employing key eligibility criteria of nmCRPC with a baseline PSA of at least 2ng/mL and PSA doubling time of no more than 10 months. Notably, the determination of non-metastatic disease was made on the basis of conventional imaging using bone scan and computed tomography. Further, SPARTAN allowed the inclusion of patients with pelvic nodal up to 2cm. Additionally, ARAMIS allowed patients with a history of seizure or use of seizure predisposing medications. 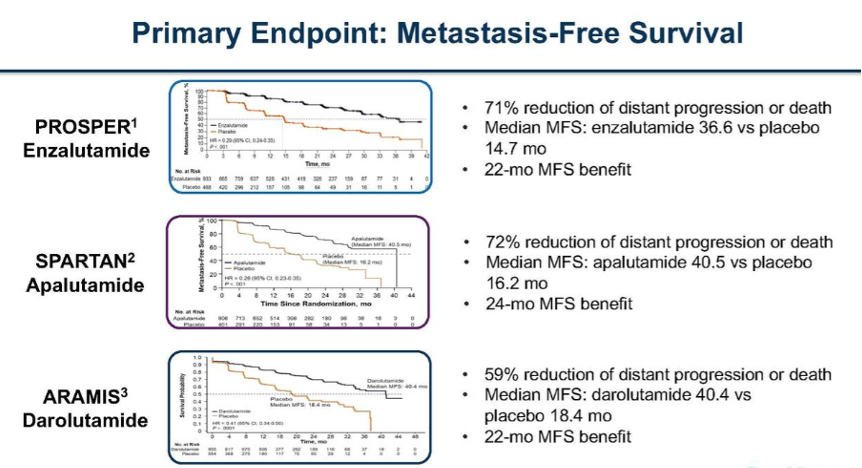 Again, as with the inclusion criteria, outcome assessment for the development of metastasis was based on bone scan and CT scan.  Notably, metastases-free survival (MFS) is new endpoint developed by study sponsors and the United States Federal Drug Administration (FDA) which was subsequently used for the approval of these agents.

Assessing then the key secondary endpoint of overall survival, Dr. Morgans again highlighted that all three of these agents demonstrated improvement compared to placebo, regardless of treatment administered later on and in spite of considerable cross-over from placebo to active agents. Thus, she concluded that these data demonstrate that there is a significant survival benefit to early treatment intensification in this patient population. 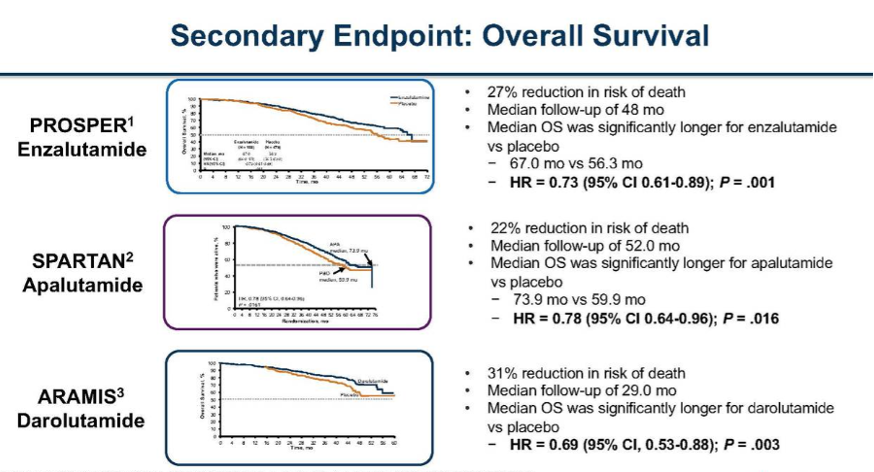 Dr. Morgans then moved to a discussion of the toxicity of these treatments. She emphasized that, because of differences between trials, comparisons between active treatment arms should not be made but, instead, conclusions should be drawn by looking at the magnitude of difference between each active treatment and the comparator arm in the associated trial. Taking this approach, she concluded that the data suggest that darolutamide may be associated with somewhat lower overall adverse event rates. Further, apalutamide and enzalutamide were particularly associated with larger effects on fatigue, hypertension and falls, relatively to their placebo comparator, than darolutamide was. Again, she emphasized that we lack, to date, direct comparative data for these agents.

Summarizing the available data for next-generation androgen receptor inhibitors in nmCPRC, Dr. Morgans emphasized that the available trials provide strong support for the FDA approvals of these agents in this disease space given improvements in MFS and overall survival (OS) as well as a favorable risk-benefit ratio and the maintenance of the health-related quality of life during therapy. Importantly, she emphasized that while the trials had specific criteria for absolute PSA and PSA doubling time, the FDA approval and associated labeling has not imposed these limitations.

Moving next to the role of novel treatment approaches in mHSPC, Dr. Morgans went first to the recently presented long-term update of the role of abiraterone in this disease space from the STAMPEDE trial. This analysis relied upon the metastatic subset of the STAMPEDE cohort and demonstrated a prolonged and highly-significant benefit in terms of overall survival, failure-free survival, and skeletal-related event-free survival. Notably, at 6 years following randomization, approximately one-quarter of all patients randomized to receive abiraterone were still on study therapy.

Dr. Morgans then moved to discuss the role of enzalutamide in this disease space, beginning first with the ARCHES trial. The methodology of the ARCHES trial has previously been reported in their initial presentation and publication. To summarize, patients with mHSPC were randomized 1:1 to enzalutamide (160 mg/day) + ADT or placebo + ADT. Randomization was stratified by the extent of disease (volume) and by prior docetaxel treatment and patients were followed for radiographic progression-free survival (primary endpoint) and overall survival (secondary endpoint). To date, data on Radiographic progression-free survival (rPFS) are available and demonstrate a statistically significant benefit to the use of enzalutamide.

Dr. Morgans then highlighted two interesting post-hoc analyses of the ARCHES trial. The first of these demonstrated that the greatest benefit with the use of enzalutamide was seen for patients with nodal disease and much less benefit was realized among those with visceral disease.

The second post-hoc analysis assesses the efficacy of enzalutamide according to baseline PSA level and demonstrated comparable efficacy in patients with baseline PSA <0.2 mcg/L, 0.2-4 mcg/L, and >4 mcg/L. In terms of safety, the ARCHES trial demonstrated no new safety signals compared to previous trials of enzalutamide and found that patients could maintain health-related quality of life while on therapy.

The second trial to assess enzalutamide in this disease space that she highlighted is ENZAMET. There are a number of notable features of this trial: randomization was stratified according to the volume of disease; early use of docetaxel (concurrent with enzalutamide) was allowed and included as randomization stratification factor; and instead of placebo in the control, patients received a first-generation anti-androgen, namely, flutamide, nilutamide, or bicalutamide.

Overall, ENZAMET demonstrated a significant improvement in overall survival with the use of enzalutamide compared to first-generation anti-androgen, with a hazard ratio of 0.67 (95% confidence interval 0.52 to 0.86). Dr. Morgans then highlighted important pre-specified subgroup analyses examining the role of enzalutamide according to the use of docetaxel. This analysis showed that, while there was an improvement in progression-free survival among patients who received both docetaxel and enzalutamide compared to those who received docetaxel and first-generation anti-androgen, there was no overall survival benefit with near super-imposition of the curves. However, in patients without docetaxel use (who also had lower volumes of disease), there were significant improvements in both progression-free and overall survival.

Thus, she concluded that a “triplet” approach with androgen deprivation therapy (ADT), docetaxel, and enzalutamide is not clearly beneficial, though data remain somewhat immature. Notably, in this group, the addition of enzalutamide was associated with an increase in docetaxel-related toxicity, including neuropathy in particular.

Dr. Morgans then moved to discuss the role of apalutamide in mHSPC based on data from the TITAN study. This trial was similar in design to the others and included prior use of docetaxel as a stratification factor.

As this presentation wound to a close, Dr. Morgans highlighted the ongoing ARASENS trials which has finished enrolling and is now waiting to read out, specifically addressing the role of “triplet intensification” by comparing ADT + docetaxel with or without the addition of darolutamide.

In conclusion, Dr. Morgans emphasized that upfront treatment with an intensified regime including abiraterone and prednisone, apalutamide, enzalutamide, or docetaxel is now the standard of care for patients with mHSPC. Treatment decisions should consider patient comorbidity and preferences. Further, the lack of prospective data and informative biomarkers makes treatment sequencing difficult.

Presented by: Alicia Morgans, MD, MPH is an Associate Professor of Medicine in the Division of Hematology/Oncology at the Northwestern University Feinberg School of Medicine in Chicago, Illinois.