(UroToday.com)  During the Best of Bladder Cancer session during the 2020 Society of Urologic Oncology (SUO) annual meeting, Dr. Andrew Lenis presented on his group’s experience with genomic characterization of cystectomy patients. Currently, the standard of care for muscle-invasive bladder cancer is neoadjuvant chemotherapy followed by radical cystectomy. The majority of studies in this space have focused on chemotherapy treatment-naïve patients with the aim of preoperative risk stratification and treatment selection. However, current trials are investigating the role of adjuvant immunotherapy in patients with the chemo-resistant disease. For this reason, the group at Memorial Sloan Kettering Cancer Center (MSKCC) sought to elucidate the molecular biology of chemo-resistant disease in order to help expand therapeutic options.

The group hypothesized that the patients with chemo-resistant disease would have fewer DNA damage repair gene alteration and lower tumor mutational burden. Additionally, they sought to identify the presence of alterations in targetable mutations in this cohort of patients.

The study was designed as a retrospective analysis (Figure 1) utilizing their radical cystectomy database containing over 3,000 patients. They identified patients with clinic T2 to T4 bladder cancer who were treated with neoadjuvant gemcitabine and cisplatin. Next, they limited their study cohort to patients with residual disease at cystectomy based on pathology.  And then further restricted their cohort to those that underwent targeted exome analysis using the Memorial Sloan-Kettering integrated mutational profiling of actionable cancer targets platform. 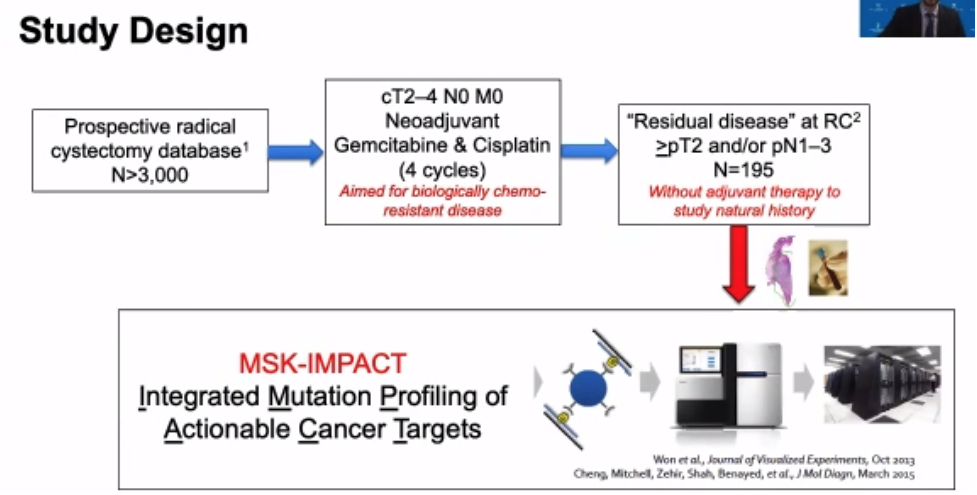 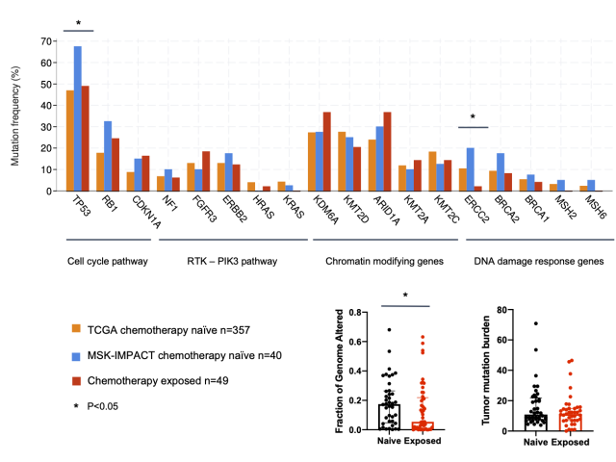 Next, they utilized OncoKB, a library of information on gene alterations and possible treatments, to elucidate potentially targetable mutations. Each entry in OncoKB is ranked from 1 to 4, with level 1 being FDA-recognized biomarkers and level 4 alterations as having compelling biologic evidence. They found that 60% of alterations in chemo-resistant tumors were actionable with half of these being level 1.

Taken together, the findings of this study have many future clinical implications, highlighting the potential of genomics to identify those who will not benefit from NAC, as well as providing future targets for the adjuvant space.