Phoenix, Arizona (UroToday.com) Increased understanding of the genomic landscape of advanced and metastatic prostate cancer has led to potentially actionable targets. Pritchard et al. demonstrated that 12% of men with advanced or mPCa has germline mutations in DNA repair genes. This was irrespective of family history and age of onset. BRCA2 was most common, but there were numerous that accounted for just 1-2% of that 12%.

Patients with metastatic castration-resistant prostate cancer (mCRPC) who have homologous recombination repair mutation (HRRm) have been previously shown to have improved response to the PARP inhibitor olaparib (Lynparza) as monotherapy when compared to men without a HRRm. Based on this, the authors of this study initiated an assessment of olaparib in combination with abiraterone (an androgen axis targeted therapy approved in this setting already) in men with mCRPC already previously treated with chemotherapy. The biologic rationale was that they would work synergistically – PARP inhibitors would affect AR-dependent transcription while abiraterone would work on androgen synthesis.

This was a Phase II, placebo-controlled trial. Men with mCRPC previously treated with chemotherapy (docetaxel) were eligible regardless of HRRm status. Standard of care would be treated with ARAT, specifically abiraterone.

Patients were randomized 1:1 to either arm A - olaparib 300 mg bid (tablets; combination with abiraterone) or arm B- placebo (comparator). All patients received abiraterone (1000 mg od). Patients were treated until disease progression.

HRRm status was assessed in different ways for different patients, depending on the availability of tissue: 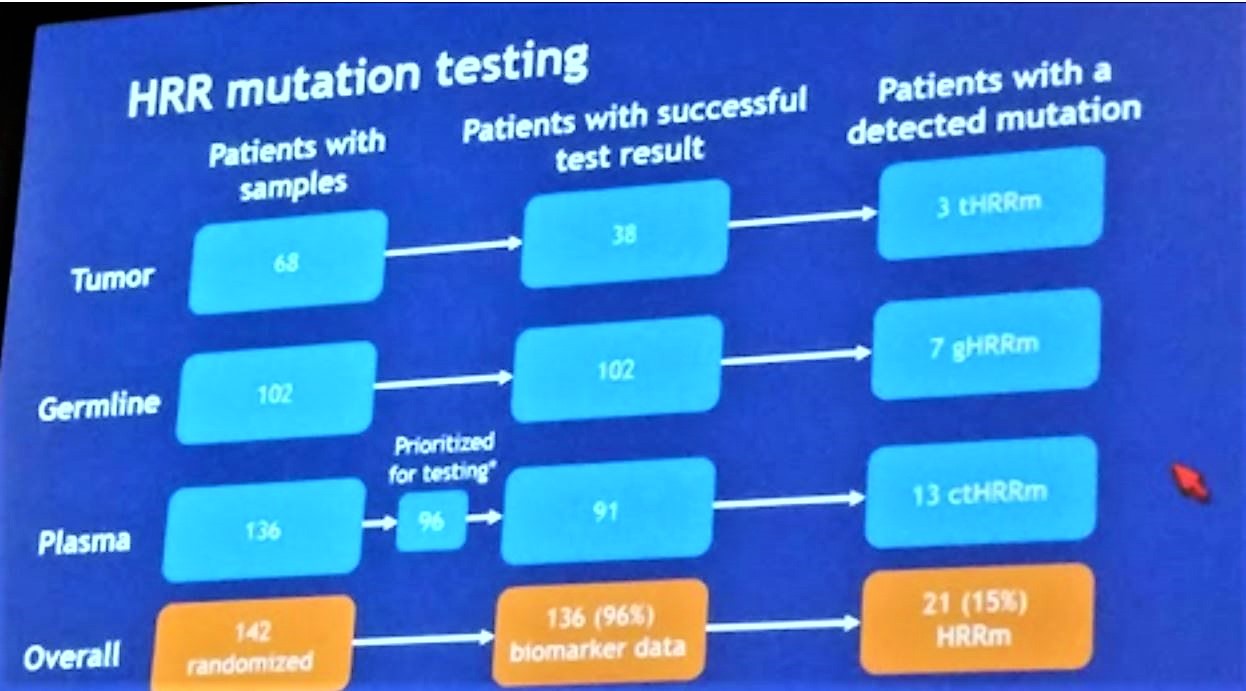 They recruited 142 pts to the study and they were randomized 1:1 to each arm (both arms, n = 71). Baseline patient demographics are below: 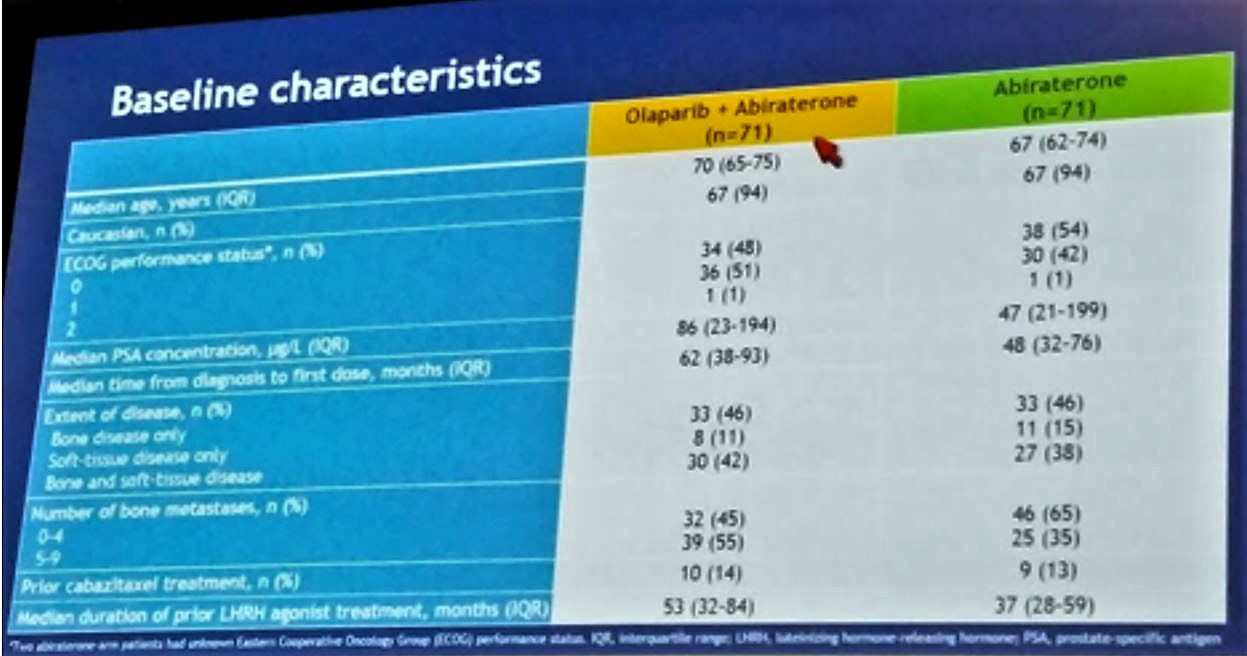 In terms of oncologic outcomes, there was a statistically significant increase in rPFS seen with the combination (13.8 months) vs abiraterone alone (8.2 months), a 5.5 month PFS benefit (HR 0.65, P= 0.03). As seen below, HRRm status did not seem to impact this benefit:

When looking at the objective response, most of the benefit seemed to come from shifting patients from progressive disease to stable disease. There were no complete responses in either arm. Partial responses were similar in both arms (~27-32%).

In terms of tolerability, adding olaparib increased the AE profile: 54% vs 28% of pts, respectively, had grade ≥3 AEs; 34% vs 18% reported serious AEs, including more cardiovascular AEs with the combination. Treatment-related deaths were seen in 6% vs. 1% of each arm. Anemia, which is a known effect of PARP inhibitors, was significantly higher in the olaparib arm. 30% vs 10% of pts, respectively, discontinued treatment due to an AE. Based on AE, the median time to deterioration in the quality of life (QoL; FACT-P) was 5.7 vs 6.0 months, respectively (HR 0.97, not significantly different).

As the authors note, while the safety data was not as favorable for the combination, there was a significant PFS and survival benefit with adding a PARP inhibitor to SOC abiraterone therapy. This is the first study to show the efficacy of PARP inhibitors independent of HRRm status.

The authors noted that the PROPEL phase III study based on this data is due to begin accruing this year.