Dr. Kim began by highlighting that, despite a shared clinical gestalt, guidelines for the management of patients with nmCRPC differ somewhat in the specificity of this definition across the National Comprehensive Cancer Network (NCCN), American Urological Association (AUA), and Prostate Cancer Working Group 3 (PCWG3). The PCWG3 definition is the most specific and potentially useful definition: minimum PSA of 1.0 ng/mL; rising PSA at least 2ng/mL higher than nadir and at least 25% higher than nadir; castrate testosterone; no radiographic evidence of metastasis.

Until very recently, there were no approved treatment options for these patients, though disease progression is common with an annual rate of progression to metastasis of approximately 34%. 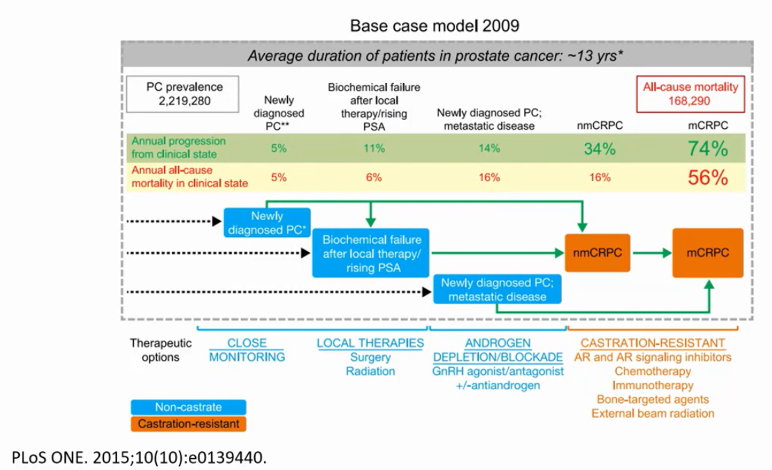 Dr. Kim then moved to consider treatment options. Until recently, the only approved approach was the continuation of androgen deprivation therapy (ADT) and remains the most common approach. Interestingly, Dr. Kim highlighted some retrospective data suggesting a survival advantage to surgical castration at the time of developing castration resistance while on LHRH agonists. However, the results of three recent trials have introduced proven life-prolonging agents.

First, Dr. Kim discussed the results of the PROSPER trial which examined enzalutamide in this disease space. Recruiting men with high-risk for metastasis on the basis of prostate-specific antigen (PSA) doubling time, the trial randomized in a 2:1 fashion to enzalutamide or placebo with a primary endpoint of metastasis-free survival (MFS) and key secondary endpoint of overall survival. Highlighting the initial publication, he noted that use of enzalutamide significantly prolonged metastasis-free survival, as well as PSA progression and first use of subsequent anti-neoplastic treatment. However, he did not discuss recently published overall survival data.

He then moved to a discussion of the SPARTAN trial, examining apalutamide among these men. This study utilized similar recruitment, eligibility criteria, and randomization approach. Notably, patients with N1 disease were allowed. Results similarly favored the use of apalutamide. Again, Dr. Kim didn’t discuss recently published overall survival data.

Finally, he discussed the ARAMIS trial of darolutamide. In contrast with the other agents, darolutamide is structurally distinct with low penetration of the blood-brain barrier and thus, this trial did not exclude patients at increased seizure risk. Apart from this, recruitment, eligibility, and randomization were similar to the previously described trials. Again, the use of darolutamide for nmCRPC was associated with improved metastasis-free survival. Dr. Kim then highlighted updated data from ASCO 2020 demonstrating improvements in overall survival for patients treated with darolutamide for nmCRPC.