(UroToday.com) The multidisciplinary team approach to the treatment of urothelial carcinoma in the age of anti-PD1 agents instructional course was chaired by Dr. Shaheen Alanee who provided a lecture on the background on bladder cancer and introduction to anti-PD1 agents.

Dr. Alanee started with a review of bladder cancer epidemiology, noting that bladder cancer is the sixth most common in men globally with regional variations, affecting both genders, causing significant morbidity and mortality in patients who are highly comorbid. Bladder cancer imparts a major financial burden to healthcare systems worldwide and is the most expensive cancer to treat, from diagnosis to death on a per-patient basis. The American Cancer Society estimates that in 2020 there will be 81,400 new cases of bladder cancer, including 62,100 in men and 19,300 in women. Furthermore, there will be an estimated 17,980 deaths, including 13,050 in men and 4,930 in women. At diagnosis, 70% of cases are nonmuscle-invasive bladder cancer (NMIBC), 25% are muscle-invasive bladder cancer (MIBC), and 5% are metastatic. Black patients are slightly more likely to have a more advanced stage at diagnosis, and there is an increasing incidence in women with concerns for delayed diagnosis.

PD-L1 was first characterized at the Mayo Clinic as an immune regulatory molecule called B7-H1; it was later renamed to PD-L1 because it was subsequently identified as a ligand of PD-1. Several human cancer cells expressed high levels of B7-H1, and blockade of B7-H1 reduced growth of tumors in the presence of immune cells. At that time, it was concluded that B7-H1 helps tumor cells evade anti-tumor immunity. In 2003, B7-H1 was shown to be expressed on immune cells as a checkpoint and was proposed as a potential target in cancer immunotherapy in the clinical setting. There are many therapeutics that have been developed, and the most common (either used as a standard of care or in clinical trials) are the PD-1 inhibitors (pembrolizumab, nivolumab, and cemiplimab), PD-L1 inhibitors (atezolizumab, avelumab, and durvalumab), and the CTLA-4 inhibitors (ipilimumab, and tremelimumab).

Dr. Alanee then discussed a case of an 83-year-old female with several medical comorbidities that initially presented with gross hematuria. She was found on cystoscopy and subsequent transurethral resection of bladder tumor (TURBT) to have extensive, multifocal carcinoma in situ (CIS), and her staging showed no extravesical disease. She received a full course of induction Bacillus Calmette-Guérin (BCG) with a complete response, followed by three doses of maintenance BCG therapy. Surveillance was initially negative but within six months she was found to have multifocal CIS and high-grade T1 disease. She has an ECOG performance status of 2 and given her high comorbidity index was not deemed a candidate for cystectomy. At this point the treatment options for this patient according to Dr. Alanee are as follows:

Dr. Alanee notes that the standard of care in his opinion for this patient is intravenous pembrolizumab. The reason we are using pembrolizumab for BCG unresponsive NMIBC is based on data from the KEYNOTE-057 trial:1

With updated results presented at ASCO 2020 with two-year follow-up for the KEYNOTE-057 trial, among 96 patients included in the efficacy analysis, the complete response rate was 40.6% (95% confidence interval [CI] 30.7-51.1), and the median duration of response was 16.2 months (range, 0+ to 30.4+). For the 39 patients with a complete response, 18 (46.2%) had a duration of response of ≥12 months. At 12 months, progression-free survival [PFS] was 82.7% and overall survival [OS] was 97.9%. Based on this study, the FDA approved pembrolizumab for BCG-unresponsive CIS with or without papillary tumors who are ineligible for or have not elected to undergo radical cystectomy.

Dr. Alanee noted that the goal of neoadjuvant cisplatin-based chemotherapy is to provide an earlier attempt at the eradication of micro-metastasis, which is the most common cause of cancer-related morbidity and mortality. Additional goals include downstaging of the bladder tumor since we know that patients with pathologic complete responses have better outcomes. Furthermore, those patients receiving neoadjuvant chemotherapy do not need to recover after radical cystectomy to receive systemic therapy. Secondary goals of neoadjuvant chemotherapy include the opportunity to assess tumor biology and behavior in vivo in real-time, as well as the interrogation of biomarkers in tumor tissue, blood, urine, and stool for research purposes. With regards to neoadjuvant immunotherapy in this disease space, there have been several studies that have reported outcomes, as summarized in the following table:

Even though there has been promising data in the Phase II setting, Dr. Alanee cautions that we need confirmatory Phase III trials before we may change practice in the future.

In the adjuvant setting, the IMvigor010 trial was recently presented at ASCO 2020. In this trial, patients with high-risk disease, defined as pathologic ≥T2 disease, or ≥T3 muscle-invasive disease without neoadjuvant chemotherapy, or any patient with node-positive disease were included. Atezolizumab was given every 3 weeks for 1 year in the treatment arm, and patients were assessed with scans every 12 weeks for the first three years, and every 24 weeks for years 4-5:

Among 809 patients randomized to treatment or observation, the study did not meet its primary endpoint, as there was no significant difference in disease-free survival (DFS) between atezolizumab and observation. The median DFS for atezolizumab was 19.4 months, compared with 16.6 months with observation (hazard ratio [HR] 0.89, 95% CI 0.74-1.08).

Despite these disappointing results in IMvigor010, there are ongoing trials in this disease space, including the Phase III randomized AMBASSADOR trial assessing adjuvant pembrolizumab in muscle-invasive and locally advanced urothelial carcinoma. The schema of this trial is as follows: 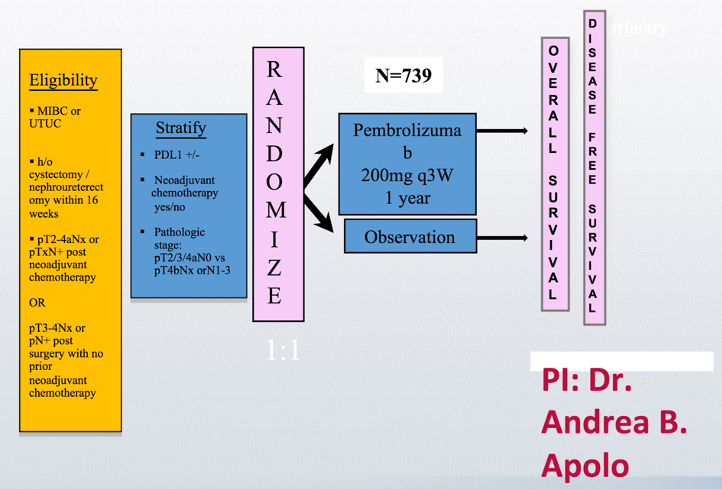 SIU Virtual Congress 2020: Benefits of MDT Approach for Patients Receiving Treatment with Anti PD Agents, and the Role of Anti-PD1 Agents in the Management of Locally Advanced and Metastatic Bladder Cancer