Athens, Greece (UroToday.com) The objective of this talk given by Dr. Derya Tilki was to review the diagnostic biomarkers in the pre-biopsy setting of prostate cancer and to describe their cost-effectiveness. The ideal biomarkers in the pre-biopsy setting should be able to increase the probability of achieving a positive biopsy. Unfortunately, the positive predictive value of the most used biomarker to date for prostate cancer (PSA), is very low (25-40%) when it is in the range of 4-10 ng/ml.1 Approximately 65-75% and 10-35% of initial and repeat biopsies in the PSA range of 4-10 ng/ml are negative.2 The ideal biomarker will reduce over-detection and the number of unnecessary biopsies, as biopsies have significant adverse events (infection, bleeding), and are associated with pain.3

Currently, available prostate cancer biomarkers in the pre-biopsy setting can be divided into two groups:

According to the European Association of Urology (EAU) guidelines, to avoid unnecessary biopsies, it is recommended to use risk calculators and additional biomarkers, or imaging.

Dr. Tilki described the important available biomarkers to date. The first biomarkers that were discussed were the PHI and the 4K score. The PHI combines three PSA sub-forms (total PSA, free PSA, and [-2]proPSA) into a single score. It is indicated in men with a PSA of between 2-10 ng/ml and normal digital rectal examination (DRE).4 The PHI score has been shown to correlate with the percentage of a positive biopsy.

The 4K score combines four prostate-specific kallikrein assay results (total PSA, free PSA, intact PSA, and hk2) with age and prior biopsy status. The 4K score gives the percentage risk of having aggressive prostate cancer, and it has been shown to predict the probability of distant metastasis within 20 years.5

In a comparison of 4k to PHI, both similarly improved discrimination when predicting prostate cancer and high-grade prostate cancer. Both are simple blood tests that can reduce the number of unnecessary biopsies compared with screening with PSA only.6 Usage of the 4K score in a hypothetical cohort of 100,000 men suspected of having prostate cancer, can result in an average net savings of 169 million dollars (1694 USD per patient), during the first year after the first urologist visit7 (Figure 1).

Dr. Tilki moved on to discuss the SelectMDx biomarker. This is a non-invasive urine assay aimed to improve patient selection for initial biopsy. It is a two-gene risk score combining HOXC6 and DLX1 mRNA expression levels with clinical risk factors, which include:

This biomarker can detect high-grade clinically significant prostate cancer. It has an area under the curve (AUC) of 0.89 for detecting clinically significant cancer, and it is highly correlated with Gleason score as well, with a negative predictive value of 98% for aggressive cancer. Various cost-effectiveness studies of SelectMDx have been done, demonstrating its ability to significantly save money.8 There has been some data showing the potential role of this biomarker to select patients for multiparametric MRI.1

Next, the MI-prostate score was discussed. This score consists of:

It can predict the presence of overall and high-grade prostate cancer on initial and repeat biopsy.9 It has been shown to have an AUC of 0.772 for the detection of prostate cancer.10

ExoDX prostate (Intelliscore) was discussed next. This urine biomarker utilized exosomes, which are small, double-lipid membrane vesicles that are secreted from cells. This is a urinary exosome gene expression assay that predicts the presence of high-grade prostate cancer for men older than 50 with a PSA of 2-10 ng/ml, referred for an initial biopsy. It gives a score between 0-100 by combining the relative weighted expressions of three gene signatures. A score>15.6 is associated with an increased likelihood of high-grade prostate cancer on a subsequent biopsy. It has an AUC of 0.77 and has been validated in a large multicenter study.11

ConfirmMDx is also used to ascertain when to perform a prostate biopsy. ConfirmMDx detects a field-effect or halo associated with the presence of cancer at the DNA level (Figure 2). It detects epigenetic changes and is performed on the residual tissue from previous negative biopsies (up to 30 months old). It helps to distinguish patients who have a true-negative biopsy from those who may have occult cancer. The test helps find men who may benefit from a mpMRI or another biopsy and early detection. It has 90% and 96% negative predictive value for the detection of any cancer and significant prostate cancer, respectively. 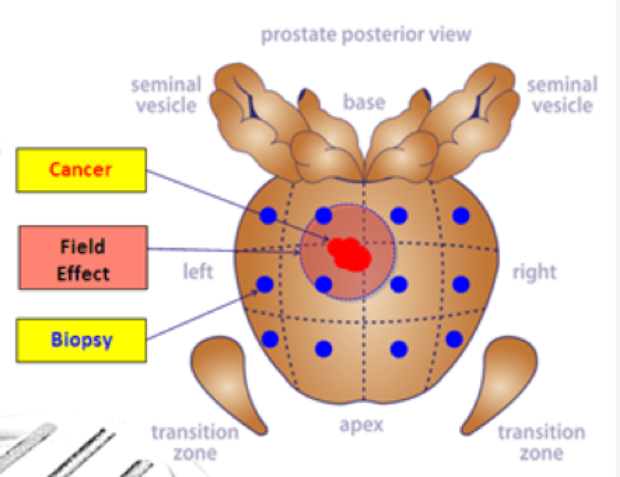 With this large array of available biomarkers, it is extremely difficult to choose which biomarker to use. Unfortunately, high quality direct comparative studies to aid in the decision process are lacking.

The 4M study is a multicenter prospective study by the Dutch Cancer Foundation. The study will compare multiparametric MRI, various biomarkers and risk calculators in ~ 600 men with a PSA>=3 ng/ml. Recruitment and analysis have been completed and the much-awaited results are expected 2020.