(UroToday.com) In the American Urologic Association (AUA) Course of Choice Lecture at this year’s Southeast Section of the American Urologic Association Virtual Annual Meeting, Dr. Morgan discussed the role of genetic testing in prostate cancer across the spectrum of the disease natural history from early detection to the treatment of localized disease and castration-resistant prostate cancer (CRPC).

Dr. Morgan began by highlighting that one in ten men with metastatic prostate cancer have germline DNA repair mutations. Notably, not all men had a family history of prostate cancer. With this in mind, he highlighted learning objectives including learning when to use genetic testing, how to counsel men, and how to interpret and utilize the result of genetic testing.

When considering the rationale for germline testing, Dr. Morgan emphasizes that these data may be informative across a range of relevant questions:

1. risk assessment – what is the probability of developing cancer?
2. disease prevention – is the disease risk modifiable?
3. prognosis – how does carrying a mutation affect the natural history of prostate cancer?
4. treatment selection – are certain treatments more or less efficacious as a result of having a specific mutation?
5. familial risks- is there a need for testing of family members?

Considering the underlying genetic underpinnings of prostate cancer, we must consider three categories of disease. First, hereditary prostate cancer, encompassing approximately 5-10% of all cases, is typically due to a single inherited genetic mutation and greatly increases the lifetime risk of the disease. Examples for prostate cancer include BRCA1, BRCA2, Lynch syndrome, and HOXB13. The second category is familial cancers, which comprise 15-20% of cases. While these have some features of hereditary cancer, typically no detectable mutation can be identified. It is typically ascribed that the causation of this pattern of disease is due to a possible combination of genetic and environmental risks. Close family members of those with familial prostate cancer are, themselves, at increased risk. The third and final category is sporadic prostate cancer.  This group, comprising 70-80% of all cases, does not typically have an identified underlying cause of carcinogenesis. Further, patients with these tumors do not have features of hereditary or familial cancer and their family members are not at increased risk. Given the multifaceted nature of the genetic predisposition for prostate cancer, it is not surprising that very rare variants with large effect sizes are not yet identified, and may never be. However, taken together, family history, rare pathogenic mutations, and single nucleotide polymorphisms associated with risk contribute to variation in incidence and mortality of prostate cancer.

Dr. Morgan then described some of the important pathogenic variants. He first discussed BRCA1 and 2, DNA damage response genes. Mutations in these genes confer an increased lifetime risk of prostate cancer (2.6x, with a greater effect among those with BRCA2 mutations) as well as with prostate cancer diagnosed before age 65 (8.6x among those with BRCA2 mutations). Additionally, mutations in these genes are associated with a more aggressive cancer phenotype and poorer prognosis. Due to the underlying mechanism, there is an increased risk both for the individual and their family members of other hereditary cancers including breast, ovarian, melanoma, pancreatic, Lynch syndrome, and colon cancer. In patients with localized disease, BRCA1 mutations are present in approximately 0.5% of patients and BRCA2 mutations are presented in approximately 1%, though rates are more common in more advanced disease.

Mechanistically, Dr. Morgan highlighted that DNA damage repair deficiency associated with these mutations inactivates one gene copy. Inactivation requires both copies to be lost, thus, these patients have a synthetic lethality when treated with inhibitors of homologous recombination repair, such as PARP inhibitors.

To address the question of who should receive germline testing, Dr. Morgan highlighted NCCN guidelines these advocate testing for all patients with:

However, Dr. Morgan highlighted that recent studies have found that a significant proportion (37%) of men with germline variants would not have been identified and prioritized for testing according to these guidelines. Thus, they remain a work in progress.

In the NCCN localized prostate cancer guidelines, testing is recommended for all patients with high-risk disease and for those with the low and intermediate-risk disease who have a strong family history or intraductal/cribriform histology. Further, germline mutation testing is warranted among patients who have a family history of mutation in a cancer susceptibility gene or in whom mutations have been identified in somatic testing.

In terms of how to do carry out testing, Dr. Morgan highlighted that a streamlined approach is necessary, encompassing: defining criteria for testing; taking a thorough family history; patient counseling; understanding cost implications of testing; ordering of the test; and genetic counseling following test results.

In terms of family history, Dr. Morgan emphasized the importance of taking a more thorough history than we may be accustomed to doing. In particular, beyond asking about prostate cancer, we need to inquire about other relevant cancer types, the disease characteristics, and age of diagnosis.

At the University of Michigan where he practices, Dr. Morgan described their standardized approach to collecting family history.

Moving beyond identifying patients for whom germline testing may be appropriate, Dr. Morgan highlighted a large and potentially growing role for the clinician in counseling. While the traditional genetic counselor-directed approach delegates most of these responsibilities to a genetic counselor, many of them may be handled by an appropriately informed urologist, medical oncologist, or radiation oncologist.

Given that access to genetic counselors is limited, increasing the involvement of prostate cancer clinicians in genetic testing is important for ensuring that this testing is available to all eligible patients. This is particularly true for pre-test counseling, prior to the patient deciding to undertake testing. Genetic counselors retain a critical role in helping to communicate test results and arrange further testing where necessary.

Dr. Morgan then highlighted that federal legislation prevents health insurance and employment discrimination on the basis of genetic testing results. However, this does not preclude discrimination in life, disability, or long-term care insurance.

Once we have decided that a patient is appropriate for genetic testing, we must consider what test to order. Again, the NCCN guidelines offer guidance: for patients with a family history of a pathogenic or likely pathogenic variant, testing for that specific mutation is recommended while for those a multi-gene panel is recommended. Notably, testing for more variants is not inherently better as it increases the likelihood of detecting variants of unknown significance which may incur cost and anxiety to address. Logistically speaking, Dr. Morgan recommended blood or saliva-based platform using a single given or panel with a subset of defined genes. While tests may be either positive, in which case referral to genetic counseling and cascade testing is warranted, or negative, in which case no pathogenic mutations are found, they may also come back indeterminate with variants of uncertain clinical significance (“VUS”). While clinically, these VUS are treated as negative, these patients should be referred for genetic counseling.

Dr. Morgan then described an ongoing, IRB-approved study at the University of Michigan assessing clinician-guided counseling. This ongoing study has demonstrated that prostate cancer clinicians can provide this care. In doing so, we can increase access to this important testing for our patients.

In addition to direct treatment implications, genetic testing is perhaps most critical in the importance to trigger cascade testing, identifying family members potentially at risk and offering them the ability to undergoing tailored tumor screening and risk reduction.

In patients with a known history of mutations that predispose to prostate cancer, the IMPACT study provides key information of how we may approach prostate cancer screening and early detection. To date, 3 year data are available. This study has shown that BRCA1 carriers have an incrementally increased risk of prostate cancer compared with controls while this effect is greater among those with BRCA2. Additionally, for those with BRCA2, detected cancer were more likely to be intermediate or high-risk. Further, those with BRCA2 were diagnosed at a younger age, though still in their 60s.

While these data highlight the importance of early detection, they also emphasize that not all individuals in mutations with these cancer predisposition genes are destined to develop prostate cancer or have an aggressive phenotype if diagnosed. Dr. Morgan then highlighted a similar approach taken in the University of Michigan Prostate Cancer Risk Clinic. For patients with known prostate cancer-related mutations, the clinic offers screening with PSA, DRE, and SelectMDx. A biopsy is recommended on the basis of abnormal DRE, urinary biomarker assay or elevated PSA with thresholds of 2 ng/mL for those under the age of 50 years and 2.5 ng/mL in those aged 50 – 70 years. A similar study is ongoing at the National Cancer Institute which further offers screening MRI every two years. 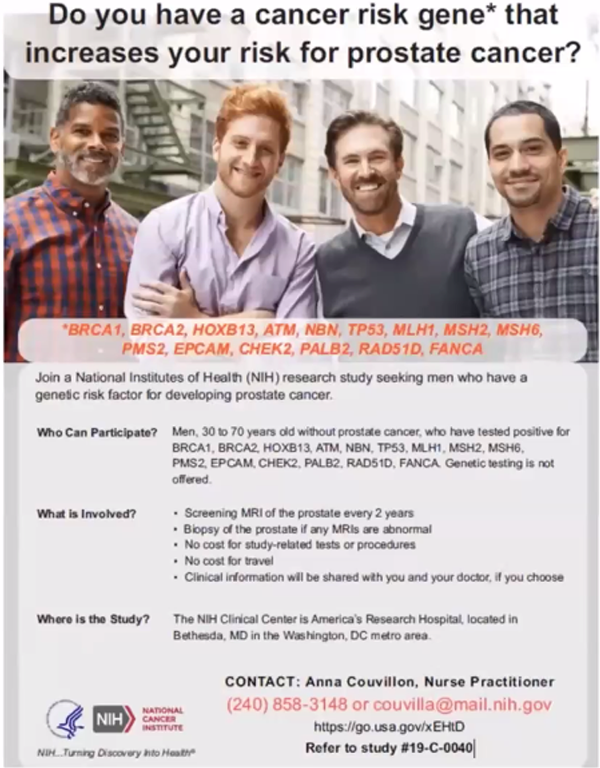 For men with localized prostate cancer, those with BRCA mutations have worse metastasis-free survival and cancer-specific survival after treatment with either surgery or radiotherapy, compared to non-carriers.

Among patients eligible for active surveillance at Johns Hopkins, Dr. Morgan highlighted data showing a higher rate of upgrading during surveillance for those with mutations in BRCA1, BRCA2, or ATM.

However, he cautioned that these are really early data, with only a handful of patients with gene mutations included. Thus, in his view, we still have a lot more to learn before we “take active surveillance off the table”. However, patients should be counseled that, particularly for those with BRCA2 mutations, there is an increased risk of upgrading compared to the overall active surveillance population.

Transitioning to advanced prostate cancer, Dr. Morgan highlighted data from Dr. Robinson and others demonstrating that 90% of patients with mCRPC have actionable molecular alterations. The first data suggesting the role of targeting DNA damage repair in prostate cancer came from Dr. Mateo and colleagues with the publication of TOPARP-A. This study showed high rates of response to the PARP inhibitor olaparib among patients with defects in homologous recombination repair.

Subsequently, TOPARP-B demonstrated, favorable response rates, particularly in patients with mutations in BRCA1 and BRCA2. These important, hypothesis-generating results were confirmed in phase III PROfound trial demonstrating a survival benefit for patients with BRCA1, BRCA2, or ATM mutations who received olaparib, compared to control, in mCRPC. The TRITON2 study provided an uncontrolled assessment of rucaparib in a similar population, demonstrating high rates of PSA response.

In conclusion, Dr. Morgan emphasized that the inherited susceptibility to prostate cancer is complex and remains poorly understood. Urologists need, for the sake of our patients, to become experts in this disease biology to appropriately offer genetic testing. At this time, for men with localized prostate cancer, there are no obvious treatment implications for the identification of germline mutations. However, the resultant cascade testing may be very important for the patient and their family. In more advanced stages of the disease, new treatment approaches are available on the basis of homologous recombination repair deficiency.