To this end, the Johns Hopkins Greenberg Bladder Cancer Institute and the American Urological Association held a Translational Research Collaboration entitled “Drug Development in NMIBC from Scientific, Regulatory, Clinician, and Patient Perspectives”. The fourth session of this symposium focused on the Treatment of Non-Muscle-Invasive Urothelial Cancer of the Upper Tract. In this session, Dr. Bishoy Faltas presented the genomics of upper tract urothelial carcinoma (UTUC).

Dr. Faltas began by highlighting that UTUC comprises 5-10% of all urothelial carcinomas and has a unique epidemiologic association with both genetic causes (eg. Lynch syndrome) and environmental exposures (eg. arsenic and aristocholic acid). Compared to bladder cancer, UTUC presents more commonly with muscle-invasive disease (60% vs 20-30%). However, after controlling for stage, outcomes are similar for UTUC and bladder cancer. Considering these differences in stage, he highlighted differences in the anatomic and embryology of the upper urinary tract and the bladder, emphasizing that the muscularis propria is thinner in the upper tract.

He then addressed the question of whether UTUC and bladder cancers is a single disease entity or two separate diseases. First considering this from the genomic perspective, he cited differences in mutation rates between the two conditions with evidence of lower rates of TP53 alterations in UTUC but higher rates of FGFR3 alterations, a finding that was confirmed in multiple analyses from different cohorts. 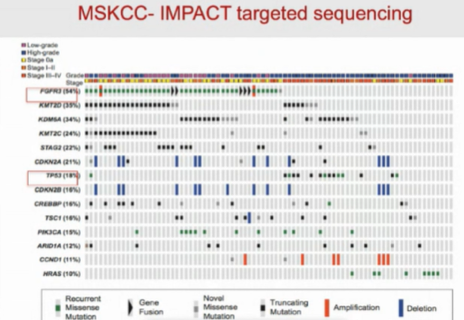 Considering next this question from the perspective of RNA expression, Dr. Faltas highlighted known differences in RNA-expression among subtypes of bladder cancer. In UTUC, there is the enrichment of the luminal papillary subtype, on the basis of RNA expression, a finding again independently confirmed in separate cohorts and separate analyses. 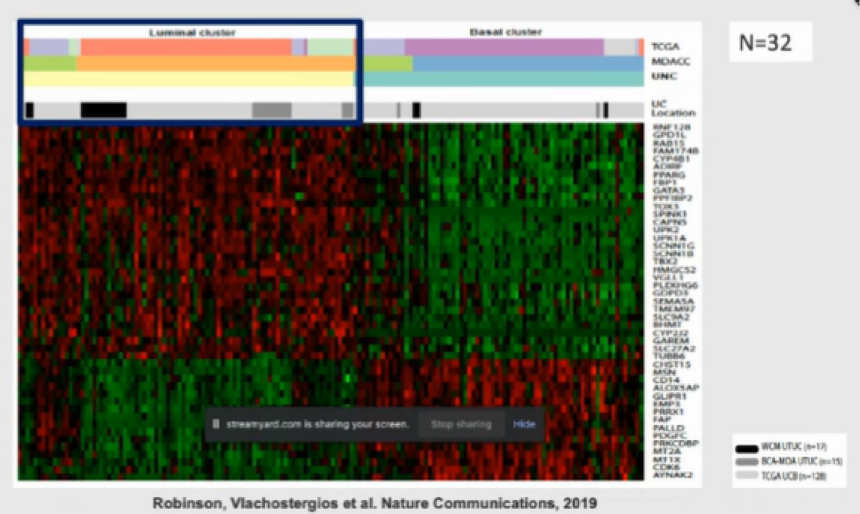 However, the distribution of subtypes may be somewhat different in metastatic tumors, with a lower preponderance of the luminal papillary subtype. Further, Dr. Faltas emphasized that, even within the same patient with UTUC, there may be molecular subtype switching between different metastatic sites.

He then moved on to discuss the evaluation of the immune contexture, as assessed using a 170 gene classifier. This analysis demonstrated that UTUC has a T-cell depleted immune phenotype. Further, there are high rates of FGFR3 signaling in UTUC. In vitro, FRFR3 inhibition may reverse immune cell deficient phenotype, increasing the sensitivity of these tumors to immune checkpoint inhibition.

Dr. Faltas then moved on to discuss UTUC and mismatch repair. While this was discussed in more detail by Dr. Taylor in her talk on Lynch syndrome and UTUC, Dr. Faltas emphasized that the vast majority of patients with UTUC have sporadic disease, not associated with Lynch. Even in patients with sporadic disease mismatch repair mutations are relatively common. However, this does not translate into higher rates of tumor mutation burden (TMB) in UTUC, compared to bladder cancer, likely because complete loss (as in germline mutations) is required to increase TMB. However, TMB is higher among patients with Lynch syndrome associated UTUC.

Dr. Faltas then considered the question of the origin of bladder cancer in patients with UTUC, given high rates of intravesical recurrence (27-42%). He presented two potential hypotheses: first, bladder tumors may result from intraluminal seeding from the prior UTUC or, second, bladder cancers may represent second primary tumors in the setting of a toxin-induced field-cancerization effect. The first of these hypotheses would be consistent with an expected high degree of clonal relatedness between the UTUC and bladder tumors, consistent with drop metastases. Indeed, studying patients in which UTUC was followed by a bladder recurrence demonstrated such a phenomenon, in keeping with seeding of the bladder. In contrast, studying patients in which the bladder tumor came first, following by UTUC, demonstrated less clonal relatedness consistent with the second hypothesis of field-cancerization.

Finally, Dr. Faltas considered insights which may be derived from single-cell analysis of UTUC. Using imaging mass cytometry, his group has been able to profile more than 350,000 individual cancer cells from 11 tumors. This work has allowed study of the distribution of markers within tumors, and quantification to understand interactions between different cell type compartments, including fibroblasts, muscle cells, and others. Further, using this single cell platform, they have been able to undertake RNA sequence validated their prior T cell depleted signature for UTUC.

In conclusion, Dr. Faltas emphasized that our understanding of UTUC biology is rapidly changing. We have recently appreciated that most UTUC has a luminal papillary subtype and a T-cell depleted immune contexture. Further, despite mismatch repair mutations, sporadic UTUC does not have high TMB or MSI. Additionally, bladder recurrences following initial UTUC likely represent drop metastases.