(UroToday.com) The clinical dilemmas in the management of non-muscle-invasive bladder cancer (NMIBC) session at the American Urological Association (AUA)’s Drug Development in NMIBC From Scientific, Regulatory, Clinician, and Patient Perspectives virtual meeting featured a presentation by Dr. Angela Smith discussing the natural history of high-risk NMIBC and novel therapies compared to radical cystectomy. High-risk NMIBC according to the AUA guidelines includes any:

In a historical study assessing the treated natural history of high-risk superficial bladder cancer, Cookson et al.1 assessed long-term (15 year) outcomes among 86 patients diagnosed between 1978 and 1981. Disease stage progressed in 46 patients (53%) and 31 (36%) eventually underwent radical cystectomy for disease progression (n=28) or refractory carcinoma in situ (n=3), while 18 (21%) had upper tract tumors at a median of 7.3 years. The 10 and 15-year disease-specific survival rates were 70 and 63%, respectively. At 15 years, 34% of patients overall were dead of bladder cancer, 27% died of other causes and 37% were alive, including 27% with an intact functioning bladder.

Dr. Smith notes that we must challenge the current beliefs of high-risk NMIBC, highlighted by a tweet from 2017 by Dr. Ashish Kamat who compared disease-specific survival of high-grade T1 NMIBC to high-risk prostate cancer that is cT3b, Gleason 5+5, with 12/12 positive cores positive for cancer, and a PSA of 75 ng/dL. This highlights two important points: (i) distinction bias – the tendency to view two options as more dissimilar when evaluating them simultaneously than when evaluating separately, and (ii) contrast effect – enhancement or reduction of a certain perception’s stimuli when compared with a recently observed contrasting object.

Another example of challenging current beliefs includes the recently published preliminary results of the BRAVO feasibility trial assessing radical cystectomy versus intravesical BCG for high-risk NIMBC.2 This trial was a two-arm, prospective multicenter randomized study to determine the feasibility in BCG-naive patients, in which patients had new high-risk NMIBC suitable for both treatment arms. There were 407 patients screened, of which 185 were approached for the trial, and consent was obtained from 51 (27.6%) patients. In the BCG arm, 23/25 (92.0%) patients received BCG, of which four had NMIBC after induction, three had NMIBC at 4 months, and four received radical cystectomy. In the radical cystectomy arm, 20 (80.0%) participants received cystectomy, including five (25.0%) with no tumor, 13 (65.0%) with high-risk NMIBC, and two (10.0%) with muscle invasion in their specimen.

Dr. Smith notes that generally there is damning evidence highlighting that (i) delaying cystectomy results in worse recurrence-free survival, (ii) salvage cystectomy following a failed attempt at BCG improves survival, and (iii) patients who progress from NMIBC to muscle-invasive bladder cancer and then undergo cystectomy have worse outcomes than those who initially present with muscle invasive disease (stage for stage). So why are there so few cystectomies performed? Looking at the BRAVO trial Dr. Smith notes that there are potential explanations. For example, 1% of patients expressed treatment preference at diagnosis, however 63% expressed treatment preference by the time they were approached for enrollment in the BRAVO trial, thus highlighting our own potential biases. Generally, both treatment arms in BRAVO were well tolerated. There were few changes seen in EQ-5D-3L questionnaires, and within QLQ-C30 functional domains, the radical cystectomy cohort had a reduction in quality of life at 3 months, which recovered to baseline between 6 and 12 months; there was little change seen in the BCG cohort over 12 months: 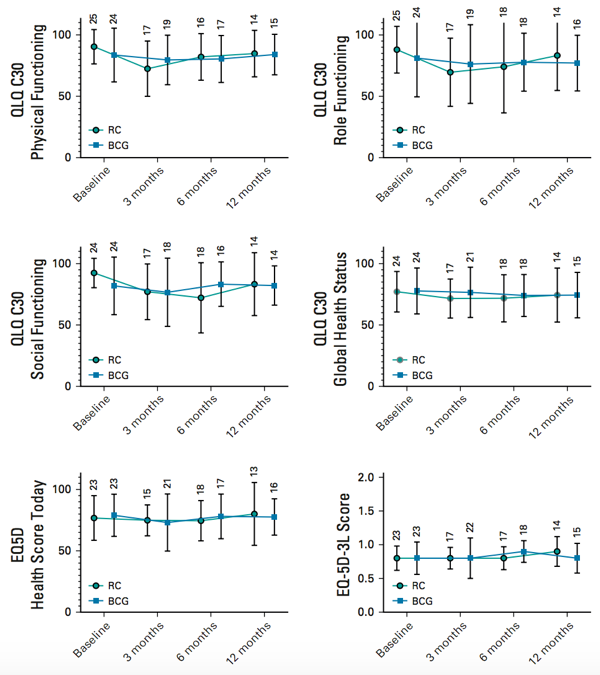 Dr. Smith notes that there are several salvage therapies for BCG unresponsive high-grade NMIBC, several of which she highlighted in her presentation and in the following figure:3 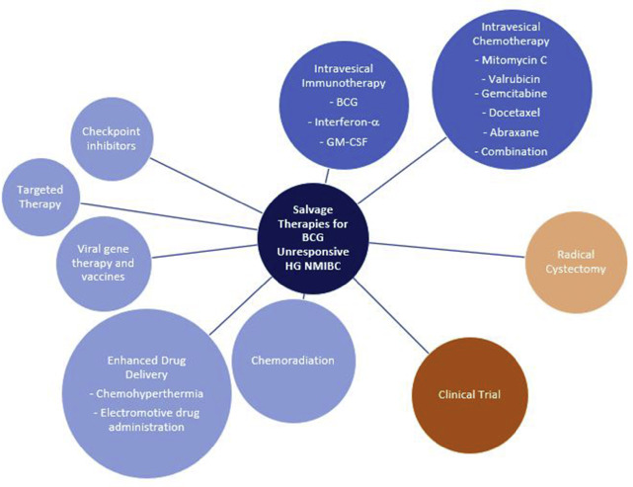 Overall, 101 patients received pembrolizumab and 96 were included in the efficacy analysis (5 patients did not meet BCG-unresponsive criteria). The median age of patients was 73 years (range: 44-92), and patients received a median of 12.0 (range: 7.0-45.0) BCG instillations. In the most updated analysis presented at the GU ASCO 2021 meeting, the median time from enrollment to data cutoff date was 36.4 months (range: 26.3-48.5). The complete response rate was 40.6% (95% CI 30.7-51.1) at first evaluable disease assessment, and the median duration of response was 16.2 months (range: 0.0+ to 36.2). Additionally, the number of patients with observed duration of response >= 12 months was 49% of initial responders and 19% of all treatment patients. Based on the initial presented results, the FDA approved pembrolizumab on January 8, 2020, for BCG-unresponsive, high-risk NMIBC. Dr. Smith’s take away points from the KEYNOTE-057 trial are as follows: (i) pembrolizumab induces complete responses in BCG unresponsive CIS, which suggests systemic activation of anti-tumor immunity, (ii) approval has redefined multidisciplinary care, with an existing model that is sequential but with a future model that will require co-management in parallel and (iii) the role of biomarkers remains an unanswered question.

The second option in the BCG-unresponsive disease space discussed by Dr. Smith was the phase III nadofaragene firadenovec trial.4 Nadofaragene firadenovec is a non-replicating recombinant type-5 adenovirus vector-based gene therapy that delivers a copy of the human IFNα2b gene. This trial was a multi-center study to investigate the safety and efficacy of intravesical nadofaragene firadenovec 75 mL once every 3 months in 157 patients with high-grade, BCG-unresponsive NMIBC. Cytology and cystoscopy (with biopsy if clinically indicated) were performed at 3, 6, and 9 months to evaluate for recurrence of high-grade disease. At 12 months, all patients underwent urine cytology, cystoscopy, and mandatory biopsy. Patients free from high-grade recurrence were eligible for retreatment at 3-month intervals while they remained high-grade recurrence free.  The study met its primary endpoint with 53.4% of patients with CIS ±Ta/T1 achieving a complete response, all by 3 months, including 43.6% of these patients remaining free of high-grade recurrence at 15 months. Additionally, the durability of response (at 12 months) in patients who achieved a complete response was 60.0% for those with papillary disease and 45.5% for those with CIS. Importantly, disease progression to muscle-invasive bladder cancer was only 5.3%. Dr. Smith’s take away points for the nadofaragene firadenovec trial are as follows:

Finally, Dr. Smith discussed the oportuzumab monatox (Vicinium) trial. Oportuzumab monatox is a recombinant fusion protein comprised of an anti-EpCAM antibody linked to a variant Pseudomonas exotoxin A, which mediates tumor cell death by blocking protein synthesis. Vicinium is an intravesical instillation two hours weekly, including induction for six weeks followed by weekly maintenance for six weeks. Patients disease-free at three months then received maintenance every two weeks for up to two years. The phase III VISTA trial demonstrated a 3-month recurrence-free survival of 71% for patients with papillary disease, and durability of response with the median TTR of 402 days (and 50% probability of remaining recurrence free for 12 months). Additionally, responders had an 88% probability of remaining cystectomy-free at 3 years: 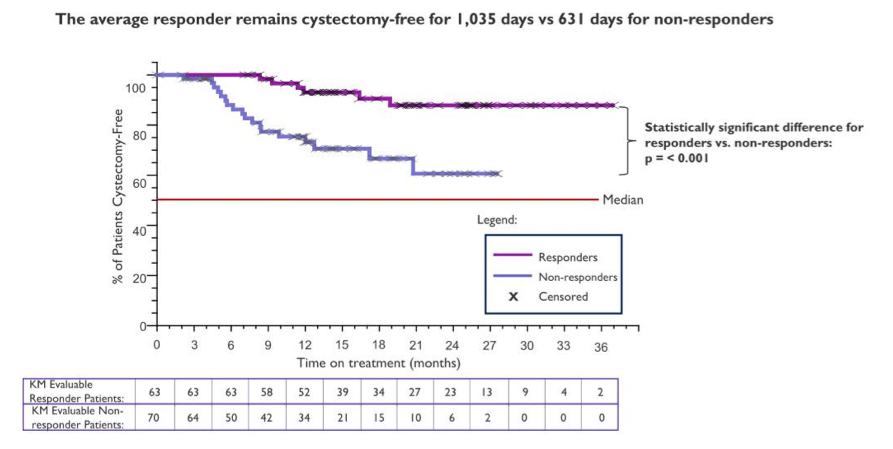 With regards to serious adverse events, there were six symptomatic adverse events of which none were determined to be related to treatment by the investigator in the phase II trial. In the phase III trial, three patients reported four events including grade 4 cholestatic hepatitis, grade 5 renal failure, grade 3 acute kidney injury, and grade 2 pyrexia.

Dr. Smith notes that the elephant in the room is that all of these trials are single arm studies, which was allowed by the FDA given the paucity of data in this disease space. However, comparative effectiveness research compares the effectiveness of two or more interventions or approaches to health care, examining their risks and benefits. Ultimately, it is about improving outcomes that is important to patients. These types of studies are often funded by PCORI, which funds studies that can help patients and those who care for them make better-informed healthcare choices. Dr. Smith and her collaborator Dr. John Gore are principal investigators of the Comparing Intravesical Therapy & Surgery as Treatment Options (CISTO) study with a primary aim of comparing patient-reported and patient-centered clinical outcomes between patients undergoing radical cystectomy and those receiving bladder-sparing medical therapies for NMIBC that have failed first-line BCG. The second aim of this study is to characterize the heterogeneity of treatments received and corresponding patient and caregiver preferences for NMIBC that failed first-line BCG. This study is enrolling 900 patients and 25 caregivers from at least 28 sites with diverse geographic location, type of community (ie. rural, suburban, urban), size, and practice setting (community and academic). Patients will be followed for up to four years. In Aim 1, the primary outcome is health-related quality of life, and secondary outcomes include urinary and sexual function, treatment preferences, decision regret, financial toxicity, healthcare utilization, bladder-cancer specific survival, and progression to muscle-invasive bladder cancer.

Dr. Smith concluded her presentation with the following take-home messages: