To this end, the Johns Hopkins Greenberg Bladder Cancer Institute and the American Urological Association (AUA) held a Translational Research Collaboration entitled “Drug Development in NMIBC from Scientific, Regulatory, Clinician, and Patient Perspectives”. The first session of this symposium focused on Drug Development for BCG-naïve NMIBC. In this session, Dr. Weinstock presented on regulatory considerations for drug development among patients with BCG-naïve NMIBC.

She began by highlighting the regulatory overview structure. Within the DA, three distinct centers provide expertise relevant to the treatment options available for patients with NMIBC.  The CDER has expertise and scope for approvals related to drug therapy while the CBER relates to biologic therapies and vaccines which, in this context, is important due to the use of BCG in this disease space and the CDRH regulates devices and companion diagnostics. A more recent development, the FDA’s Oncology Center of Excellence (OCE) unites experts across these three FDA centers on the basis of their differing expertise.

Dr. Weinstock then highlighted the history of FDA-AUA partnership, emphasizing the public workshop in 2013 addressing issues related to drug development in NMIBC. 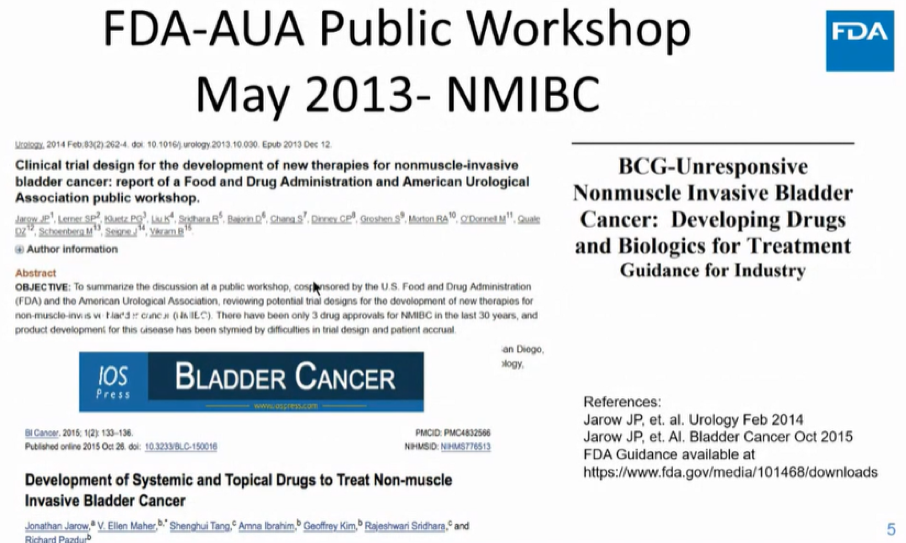 While this workshop was focused on BCG unresponsive disease and a single-arm trial rubric that would be used to inform trial design and regulatory approval of treatments in this disease space, some relevant questions for the BCG naïve space were discussed at that time. In Dr. Weinstock’s view, these included:

While the public workshop is now nearly 8 years old, these questions and the associated answers to these questions remain informative in her opinion. Addressing the first question, she emphasized that there was a “broad consensus” that trials might include a mix of both high-grade papillary and CIS disease, or both. Further, the preferred primary endpoint was time to event using failure to achieve a complete response in patients with CIS and time to recurrence in those with CIS or papillary disease as events. Finally, it was clear that, given the efficacy of BCG in this disease space, single-arm designs and non-inferiority trials using BCG were not appropriate.

However, specifically addressing the first of these issues, Dr. Weinstock emphasized difficulties with considering CIS and papillary disease in one cohort, despite the prior suggestion that a combined cohort with EFS as endpoint may be appropriate. However, in this combined cohort, it is unclear when an event should be adjudicated for patients who have persistent CIS and are never free of disease. While separate cohorts within the trial would address this, Dr. Weinstock suggested that sufficiently large effect size may overcome this concern. In addition to this issue of outcome ascertainment, Dr. Weinstock emphasized concerns regarding molecular and genomic heterogeneity between patients with papillary and CIS disease. Thus, the purest way to address management questions would be two separate cohorts.

Dr. Weinstock then moved to assess questions of alternate BCG strains. She emphasized that, as BCG was originally approved over 30 years ago, its approval was handled somewhat differently than contemporary approvals. All BCG substrains are considered distinct and, thus, new strains require review by CBER. She further highlighted that we could conceive of trials designed and conducted outside the US in which non-TICE strains were used in combination with a novel therapy. How these data would be used to inform US regulatory approval is somewhat unclear and would require input from the CBER and CDER.