In the context of understanding his career trajectory and his clinical and research interests, Dr. Lane began by highlighting the value of his training at the Cleveland Clinic, quoting Charles Dickens to say, “it was the best of times, it was the worst of times”. During his time at the Cleveland Clinic, there were dramatic changes in the practice of urology broadly, with rapid expansion in the role of minimally invasive surgery in urology. The Cleveland Clinic was at the forefront of pioneering laparoscopic approaches to most urologic oncology operations including laparoscopic partial nephrectomy, laparoscopic radical prostatectomy, and laparoscopic radical cystectomy. As a trainee, he emphasized that this environment was rich with experts across the subspecialties of urology. Focusing on kidney cancer, there was expertise in open and laparoscopic surgery, as well as the rapid development of systemic approaches to advanced disease with the availability of tyrosine kinase inhibitors.

In the context of the growth of the Glickman Urology and Kidney Institute, Dr. Lane emphasized the importance of the vision of Dr. Andrew Novick to facilitate the development of novel approaches, even where he himself didn’t participate. While he was a pioneer of complex open kidney surgery and the role of elective open partial nephrectomy, Dr. Lane emphasized his importance as a visionary leader, permitting and facilitating the development of minimally-invasive surgery.

Dr. Lane then highlighted a number of publications from the Cleveland Clinic reporting comparative outcomes of open and minimally-invasive partial nephrectomy which helped to establish minimally-invasive approaches as a standard of care. Highlighting manuscripts reporting 5-, 7-, and 10-year outcomes that he authored with Dr. Indy Gill, he emphasized that in carefully selected patients, outcomes of laparoscopic partial nephrectomy are excellent with limited risk of recurrence. Further, patient characteristics including age, comorbidity, and operative indication (elective vs imperative) as well as cancer characteristics drive recurrence rates, not the operative technique.

In particular, he highlighted the manuscript presenting seven-year data which he described as his “favourite of the manuscripts”. This analysis relies on a propensity score based analysis and he emphasized that examining the propensity to undergo partial nephrectomy highlights the differences in the patient populations undergoing these two operations. In particular, there were rare absolute indications for partial nephrectomy among patients undergoing laparoscopic surgery (5%), compared to those undergoing going surgery (30%). Further, tumors were substantially smaller among those undergoing laparoscopic surgery (2.6 cm) compared to open (3.5cm) and T1b tumors were a smaller proportion of the laparoscopic cohort (11% vs 35%). In spite of these differences, the analysis should comparable 7-year rates of metastasis free survival (97.5% vs 97.3%), highlighting that comparable results may be achieved when patients are properly selected. Further examining these data, he emphasized that tumor recurrence was largely driven by the underlying oncologic potential of the tumor (as captured using size, subtype, and grade; multivariable adjusted hazard ratio 2.67 [95% CI 1.91-3.40] per 10% increase in predicted recurrence risk) and an absolute indication for partial nephrectomy (multivariable adjusted hazard ratio 4.35 [95% CI 2.15-9.03] compared to non-absolute indication), not by surgical technique (open as compared to laparoscopic; multivariable adjusted hazard ratio 1.37, 95% CI 0.61-2.90).

He then transitioned to presenting his treatment algorithm for renal masses as of 2011 when he started practice. At this time, he suggested that many patients would go straight to surgery, with a preference for minimally-invasive partial nephrectomy where feasible, followed by open partial nephrectomy, minimally-invasive radical nephrectomy, and open radical nephrectomy. Biopsy would, at that time, have a role where treatment decisions would be affected but was not routine for many patients who proceeded straight to surgery.

He then discussed the value of mentorship from Dr. Indy Gill, highlighting him as a fearless pioneer of complex and minimally invasive surgery. When Dr. Gill was critical in the manuscripts described above highlighting the potential for laparoscopic partial nephrectomy, Dr. Lane further emphasized his important role as an advocate for those who follow in his footsteps. In that context, Dr. Lane presented slides from a prior debate with Dr. Gill at the 2021 IKCS meeting regarding open and robotic partial nephrectomy.

Options for T1 renal masses are multitudinous, as highlighted in the table below. Concerns with each approach differ. When considering the role of active surveillance or ablative approaches, concerns surround the veracity of the literature, both in terms of the number of studies and included patients, as well as long-term oncologic control. In terms of partial nephrectomy, the concern is a high urologic complication rate compared to other treatment options and, for radical nephrectomy, the primary concern is the reduction in renal function and associated cardiovascular morbidity. 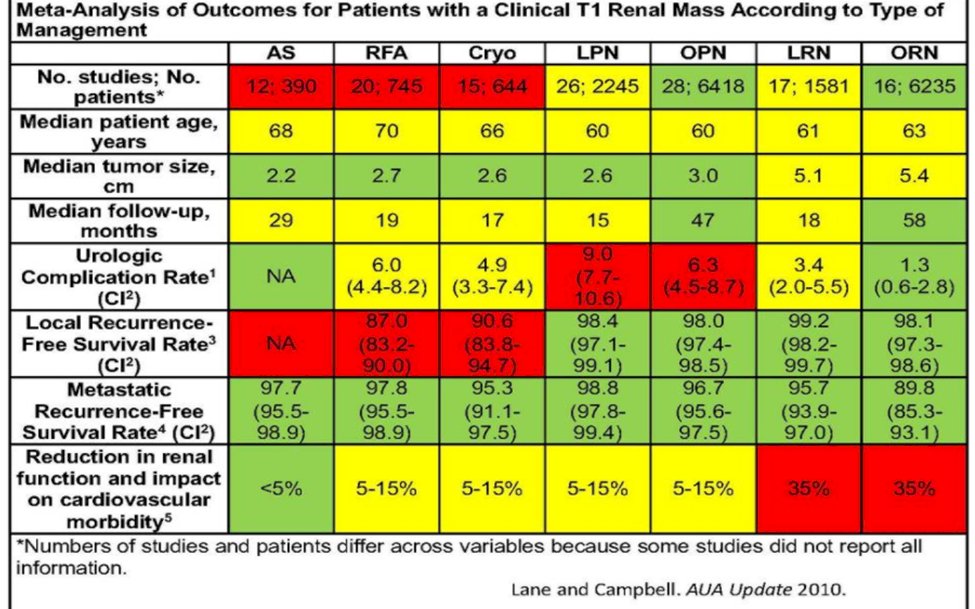 This, there isn’t a clear preferred treatment option which can be applied to all patients. Further, Dr. Lane highlighted that guidelines rarely tell you what you “must do”, and often defer to individual judgement. In guiding decisions, he suggested a decision based on expected outcomes in terms of morbidity and recovery, the risk of complications, renal function (both short and long-term), and cancer control. These factors must be viewed in the context of patient preferences and individualized based on specific patient and disease characteristics.

Considering partial nephrectomy, he suggested that the ideal procedure is the same today as it was in 2012: complete excision of the tumor, maximal preservation of renal function, and minimization of the morbidity and risk of complication associated with surgery. However, he emphasized that this is, first and foremost, a cancer operation and that the relative importance of functional preservation, morbidity, and complication risk may vary based on the clinical scenario and between patients. Therefore, the best operation, for any given patient, is the one that the surgeon feels has the best chance of accomplishing these goals.

Considering practical implications of treatment decision making for renal masses, he emphasized the importance of preserving renal parenchyma, as this plays a key role in ultimate renal function. Therefore, whenever possible, partial nephrectomy would be preferred to radical nephrectomy. Further, we should seek to minimize ischemic injury as this may contribute to both acute kidney injury and the progression of chronic kidney disease.

When weighing these considerations, he emphasized the “essential” role of tumor complexity scores. These scores (including RENAL, PADUA, and others) allow us to identify easy vs complex tumors. In patients with relatively simple tumors by these scoring systems, he highlighted that a variety of partial nephrectomy strategies, ranging from no ischemia to cold ischemia, to more 20-30 minutes of warm ischemia, have similar renal function outcomes.

While not pictured in the figure, he emphasized that the proportion of patients treated with radical nephrectomy has increased since 2012, driven by his increasing utilization of this approach for patients with T1b tumors.

Reconsidering the previously presented algorithm in 2021, he emphasized that biopsy should be a relatively standard approach for nearly all patients in whom treatment is being considered, as the results of biopsy will often affect treatment approaches.

Citing data from patients undergoing partial nephrectomy in solitary kidneys, he emphasized that both cold and warm ischemia may be reasonable when ischemia times are short. This represents the majority (89%) of all patients. There were clear selection biases between these groups, with patients undergoing cold ischemia being older, having worse baseline renal function, and a lower proportion of renal parenchyma preserved. In spite of this, decreases in post-operative renal function were comparable between the groups, despite longer ischemia time in the cold ischemic cohort (45 vs 22 minutes). Important predictors of post-operative renal function were pre-operative estimated glomerular filtration rate (eGFR), the % of parenchyma preserved, age, and tumor size, but not ischemia type. Thus, Dr. Lane concluded that the ultimate renal function following partial nephrectomy is driven primarily by the quantity and quality of renal parenchyma preserved.

Clearly, nephrectomy-induced loss of renal function will be highest among patients undergoing radical nephrectomy. However, differences between various partial nephrectomy approaches are not large.

Building off this concept, he emphasized Dr. Amr Fergany and the developing idea of surgically-induced chronic kidney disease (CKD-S). Among patients undergoing radical nephrectomy, 43% of patients develop chronic kidney disease (eGFR < 45) while only 7% of those treated with partial nephrectomy do. In the nephrology literature, eGFR is strongly associated with death from any cause and cardiovascular events. However, few urologists are involved in the guidelines associated with the management of these patients. However, they recognize the importance of understanding the cause of chronic kidney disease. Again citing data from a single center analysis at the Cleveland Clinic, Dr. Lane highlighted differences between those who never develop chronic kidney disease (CKD) following partial or radical nephrectomy, those who have newly diagnosed CKD (ie. surgical CKD, CKD-S), and those who had pre-existing CKD (CKD-M/S). Comparatively, those with CKD-S do much better than those with CKD-M/S. 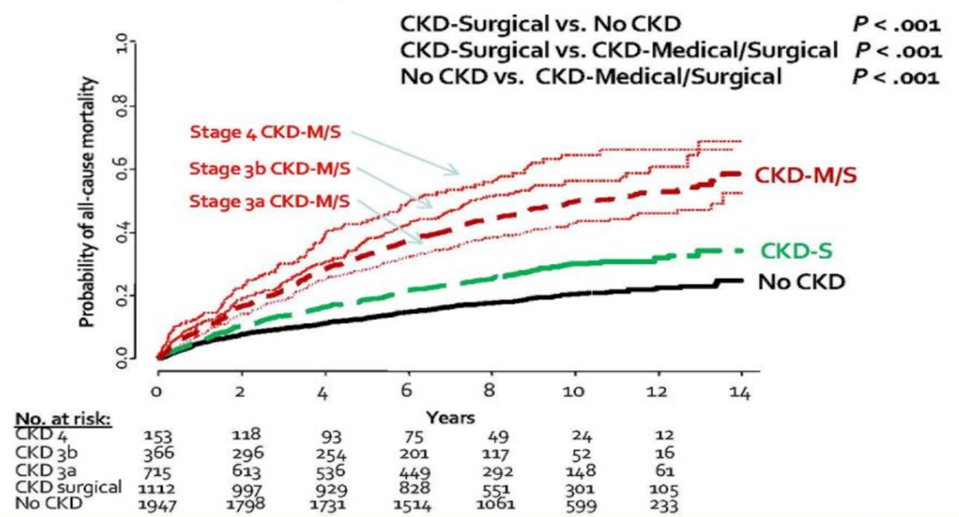 However, the nephrology literature further emphasizes the importance of albuminuria, in addition to eGFR. For any CKD category (eGFR level), increasing albuminuria is associated with worse clinical outcomes. In fact, albuminuria associated with 4x higher mortality. However, among patients undergoing surgery for renal masses, pre-operative eGFR remains an important predictor of survival. In particular, the risk of any cause mortality increases for patients with eGFR < 45 (CKD grade 3a). However, even in these patients, albuminuria remains importantly prognostic.

He therefore emphasized that assessment of albuminuria may identify additional patients at high risk of renal function decline, not identified by eGFR alone who would benefit from nephrology referral.

While Dr. Lane described an increasing role for radical nephrectomy in his practice, he also noted an increasing role for less invasive approaches than partial nephrectomy. In this context, he cited Dr. Rob Uzzo as a thought-leader in active surveillance for small renal masses. Quoting Dr. Kocher, Dr. Lane emphasized that “a surgeon is a doctor who can operate and who know when not to”. Citing data from the MUSIC-KIDNEY collaborative, he highlighted that, among all patients with cT1 renal masses 48% of patients are initially undergoing observation.

Given the variety of treatment approaches available for these renal masses, Dr. Lane highlighted the potential for discrepant care. Citing a multi-center study, he noted that almost all surgeons perform partial nephrectomy for low complexity tumors. However, in patients with intermediate complexity tumors, rates of partial nephrectomy varied between 0 and 100%. Thus, he suggested that there are several areas that may benefit from quality improvement. One model for quality improvement and assessment is the MUSIC collaborative, representing 90% of urologists in the state of Michigan. Initially focused on prostate cancer, this collaborative is now addressing kidney stones and renal masses.

He then cited the sample of his own medical history, highlighting his diagnosis of sarcoma followed by renal cell carcinoma. This experience made him reconsider many of the treatment considerations regarding renal masses. In his case, he opted for a minimally-invasive partial nephrectomy. In the end, he ended up needing chemotherapy for recurrent sarcoma. He credits, to some degree, opting for a partial nephrectomy to allow the renal function necessary for this chemotherapy to be administered.

This experience, in his words, changed his view of concerns and priorities in managing cancer. One of the most notable comments he made was that “waiting is terrible”, worse than receiving bad news.

Concluding, he emphasized that trust is earned. Patient should demand and deserve both our competence and compassion. While urologists typically focus on curative intent treatment, medical oncologists and other disciplines consider a more holistic perspective including palliation and symptom and disease management.