(UroToday.com) In a podium presentation in the Renal Cancer I – Localized session at the 2022 EAU Section of Oncological Urology (ESOU) Annual Meeting, Dr. Volpe presented on the role of artificial intelligence in kidney cancer diagnosis. 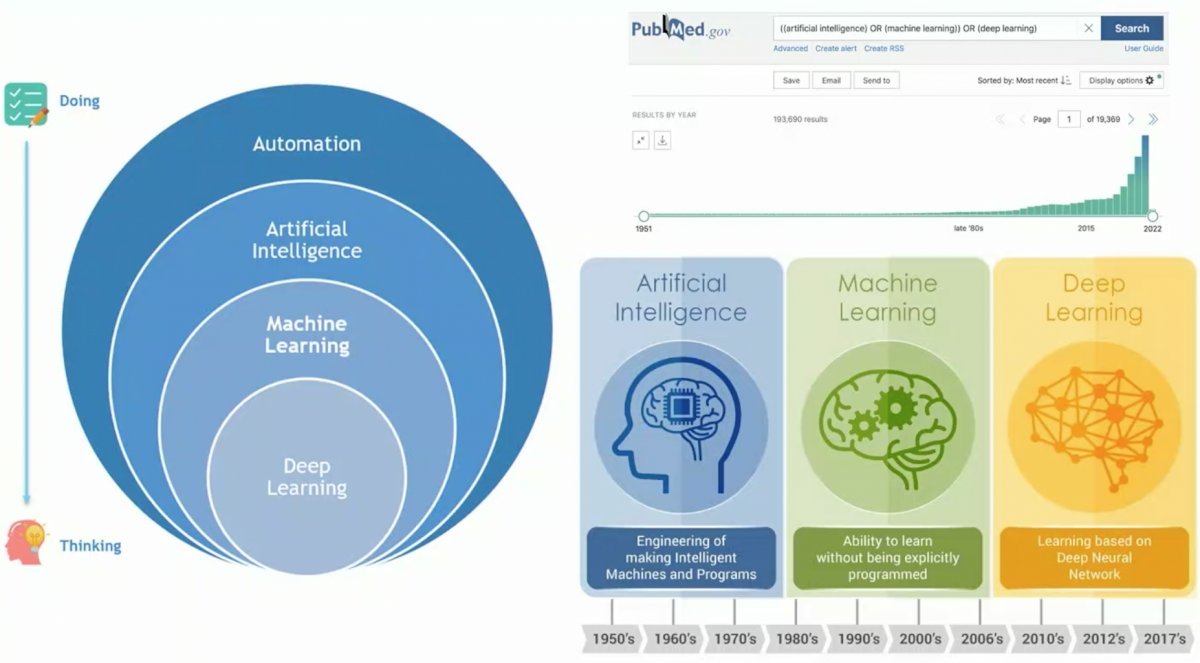 Dr. Volpe focused then defining these related, but differing approaches. Artificial intelligence refers to the capability of a machine to mimic human cognition through the perception of external stimuli and determination of an optimal strategy to achieve a desired outcome. Machine learning, a somewhat more specific subset, refers to the ability to learn iteratively without being explicitly programmed. To do so, machine learning combines computer science, mathematics, and statistical analysis to generate algorithms which assess associations between (typically) large numbers of variables and relevant outcomes. Unlike conventional statistics which test hypotheses, machine learning typically focused on outcome prediction without significance testing. Further, as alluded to above, the machine learning algorithm autonomously adapts in order to improve performance. The success of such an approach clearly depends on both the quality and quantity of data for the algorithm to utilize.

Dr. Volpe then discussed the process of machine learning. Most broadly, there must be a training process after which the model may be used for prediction. In the training phase, expert input is used to characterize relevant features which the machine learning algorithm then uses to autonomously create a classification approach. Validation processes (both internal and ideally external) provides important feedback to optimize and confirm the algorithm performance.

This machine learning approach differs somewhat from deep learning in which feature extraction and classification are integrated and learning is based on deep neural networks. This approach simulates the organizational structure of the human brain with separate computational units (ie. artificial neurons) that are interconnected through artificial synapses (ie. the artificial neural network). These multiple layers of increasingly complex interconnected units add a depth to the system. These techniques have the ability to autonomously identify causal features using the raw data during the training phase. Of particular value is the ability to identify novel features that are imperceptible to the human eye. However, as with machine learning, this learning process is dependent on the quality and quantity of the data introduced into the algorithm.

These approaches are increasingly being utilized as increasingly large datasets, so large that they exceed the computational capacity of conventional software, are becoming more common. These include electronic health records, clinical data, radiologic imaging, patient wearables, and technical data from surgical robotic systems. In these cases, artificial intelligence Dr. Volpe suggested that artificial intelligence may be the perfect tool to analyse these large volumes of unstructured data. He suggested that doing so may reduce health care costs, improve detection of novel disease patterns, provide earlier disease prediction, increase clinician efficiency, and contribute to novel drug design and delivery. To this end, he highlighted a potentially artificial intelligence augmented clinical workflow with improved detection and characterization of disease and treatment decision making.

While this holds great promise, he emphasized recent reviews which have highlighted that the quality of data used to develop artificial intelligence to date has been a significant barrier to its clinical adoption and widespread use. However, in kidney cancer, there is significant interest in its role in imaging, histologic assessment, genomic evaluation, and prognostication of survival.

Dr. Volpe then highlighted the role of artificial intelligence in imaging evaluation. It may be used in the detection phase/role with an ability to highlight suspicious areas in images, detect indeterminate nodules, and potentially address high-false positive rates associated with overdiagnosis. He cited examples from lung, CNS, breast, and prostate cancers. Beyond initial detection, artificial intelligence may be helpful in characterization of lesions by providing robust tumor descriptors to capture intra-tumoral heterogeneity and variability. This can be accomplished using segmentation and may translate into diagnosis, staging, and imaging-based genomics. Finally, AI maybe be used in the monitoring phase through its ability to capture a large number of discriminative features and undertake temporal analyses to identify changes over time.

He further highlighted that the diagnosis of small renal masses is an unmet need. In particular, as a large proportion of these may be benign, there is significant risk for overtreatment. Thus, better characterization based on imaging may optimize care. However, current imaging approaches have suboptimal accuracy to characterize malignant potential and essentially no ability to reliably determine grade. Artificial intelligence, and particularly radiomics, may allow for improvements in this regard.

Highlighting one specific clinical scenario, Dr. Volpe discussed the importance of being able to distinguish a fat-poor angiomyolipoma (a benign entity) from clear cell renal cell carcinoma and papillary renal cell carcinoma. A texture analysis of CT images may be informative here. Dr. Volpe then highlighted recent work using Google TensorFlow Inception to classify renal masses, distinguishing between clear cell renal cell carcinoma and oncocytoma. Coy and colleagues utilized 13 different approaches to convert VOI data into images that could adequately represent each tumor. These images were then used to train a neural network model. This approach has a high positive predictive value (82.5%).

He further highlighted recent work from Dr. Lin and colleagues who used a CT-based deep learning model to predict the nuclear grade of clear cell renal cell carcinoma. Beginning with an internal dataset of 390 RCCs and validating this on an external dataset of 20 tumors, the authors were able to develop a model with promising test characteristics (AUC in the internal set = 0.82 +/- 0.11 and in the external set = 0.81 +/- 0.04). Thus, demonstrating that CT-based characteristics can be applied for grading clear cell RCC.

Using data from The Cancer Genome Atlas, others have shown that an automated approach to grading of clear cell renal cell carcinoma consisting of 72 nuclei histomic feature was predictive of tumor grade (2-tiered version of Fuhrman’s grading system) with a sensitivity of 84.6% and specificity of 81.3%.

Further, these characteristics could distinguish subgroups of patients with differing survival following treatment. Moving from radiomics to genomics, he highlighted two recent efforts which have derived 15-gene and 6-gene expression profiles which are prognostic of clear cell RCC risk and are associated with recurrence free and overall survival. Notably, the use of deep neural networks outperformed standard statistical approaches in this setting.

Finally, Dr. Volpe emphasized the importance of accurately determining nephrometry scores to inform patient counselling regarding risk of complications and renal functional loss. Indeed, he highlighted that fully automated AI-generated R.E.N.A.L. scoring is feasible, with comparative outcomes to human generated R.E.N.A.L. scores. This AI-based approach, it is hoped, may facilitate a wider adoption of the use of R.E.N.A.L. scores. Dr. Volpe provided an example of a potential AI-facilitated output which summarizes predicted histology, oncologic outcomes, and complication rates associated with partial nephrectomy. This may facilitate patient counseling and treatment decision making.

While all of this work holds great promise and many have predicted the obsolescence of radiologists, Dr. Volpe emphasized a recent tweet from Eric Topol which highlighted that there have been no peer-reviewed publications from more than a half dozen of the largest companies working in this space. Thus, while AI is a fascinating tool in renal oncology with early studies showing promise for identification of tumors, differentiation of RCC subtypes, and prognostication, there are significant barriers. This approach may facilitate non-invasive tumor characterization but to date is limited by relatively small samples and this work requires larger, prospective studies with external validation to assess the role AI will play in RCC diagnosis and management moving forward.