(UroToday.com) The second Urothelial Cancer session at this year’s European Association of Urology (EAU) Section of Oncological Urology (ESOU) 2021 Virtual Meeting featured a number of presentations, focussing on controversies in the management of urothelial cancers. The fourth and final presentation in this session was from Dr. Nicholas James who discussed a variety of approaches to bladder sparing alternative to radical cystectomy, including trimodal therapy, bimodal therapy, and TURBT alone.

Dr. James began by defining trimodality therapy focusing on the use of maximal transurethral resection of bladder tumor (TURBT) and chemotherapy concurrent with radiotherapy. There are multiple approaches to delivery of this approach but Dr. James emphasized what he called a North American approach in which patients receive maximal transurethral resection followed by induction chemoradiotherapy and then re-assessment around week 7. If patients have residual or advancing disease, patients are diverted to salvage cystectomy while the remainder receive consolidation chemoradiotherapy. 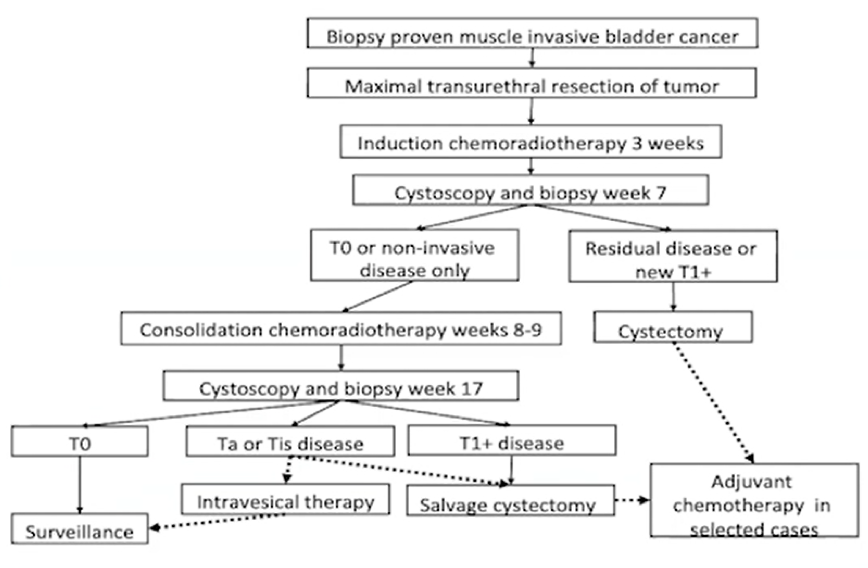 There are important selection criteria to identify patients suitable for this approach which Dr. James emphasized including maximal TURBT, the absence of carcinoma in situ (CIS), no hydronephrosis, good bladder function, and a good response to the first portion of therapy. This approach ensures that those who maintain their bladder are low stage and excludes poor responders to therapy.

Based on the distribution of treatment administered, data suggest that trimodality therapy is used in approximately 10% of patients with muscle invasive bladder cancer in North America among younger and fitter patients, as an alternative to cystectomy.

Dr. James then emphasized that the United Kingdom (UK) approach is somewhat different. In contrast to the prior approach, TURBT is utilized as indicated without a requirement for maximal debulking. Further, CIS is tolerated (as long as it’s not too extensive), hydronephrosis is not viewed as a contra-indication, and treatment is administered as a single treatment course without mid-point assessment. As with the North American approach, salvage cystectomy is used for local relapse or non-response. Further, in contrast to the demographics of utilization in North America, this approach is viewed as a mainstay for treatment in older patients as well as an alternative to surgery among younger patients. 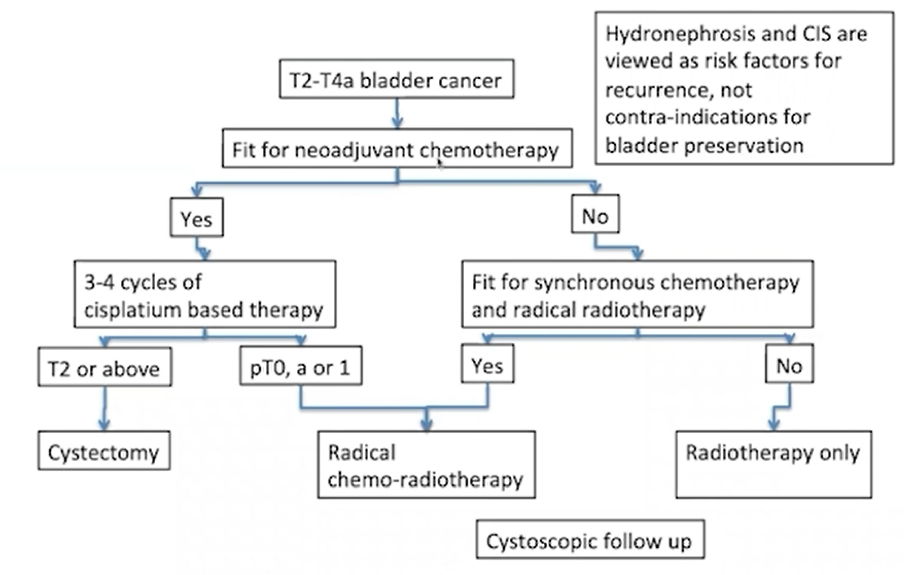 Dr. James then highlighted outcomes for salvage and primary cystectomy, from the UK series, emphasizing that cancer-specific survival is comparable between the two groups, and complication rates are generally similar.

He then summarized the UK approach to therapy emphasizing that the patient population is typically older than in North American series, the neoadjuvant chemotherapy is often employed among fitter patients, and 5-FI and mitomycin C are commonly used. As a result of these differing approaches, chemoradiotherapy is utilized in more than half of patients with muscle invasive bladder cancer in the UK.

Based on registry data, Dr. James showed that survival curves are nearly superimposed between surgically and chemoradiotherapy treated patients.

Summarizing, Dr. James emphasized that sequencing and case selection approaches to bladder preservation differ substantially between the UK and North American approaches, despite both including pre-operative assessment, TURBT, chemotherapy, radiotherapy, and cystectomy.

He then presented data from the BC2001 trial, looking at 10 year outcomes. These data demonstrated significant improvements in loco-regional control with the addition of chemotherapy to radiotherapy in bladder cancer, with particular differences in invasive local recurrence. While not significant, there is a trend towards improved overall survival among the patients who received chemotherapy while bladder cancer specific survival, metastasis-free survival, and salvage cystectomy rates favoured patients who received chemoradiotherapy.

Dr. James then emphasized that, among patients with recurrence after chemoradiotherapy, more than half had loco-regional disease of which the majority were non-invasive and could be salvaged with intravesical therapy.

Finally, Dr. James addressed the question of whether TURBT is important. Notably, he showed data showing that residual disease following resection is associated with worse survival, though extent of resection was not prognostic, reflecting these are surrogates for stage.