(UroToday.com) During the second Proffered Paper session of the European Society for Medical Oncology (ESMO) Annual Congress focusing on non-prostate genitourinary cancers, Dr. Rosenberg presented results of Cohort K of the EV-103 trial assessing the efficacy of enfortumab vedotin (EV) monotherapy or in combination with pembrolizumab (P) in previously untreated cisplatin-ineligible patients with locally advanced or metastatic urothelial cancer (la/mUC). Despite the proven efficacy of cisplatin-based chemotherapy in the first-line setting for la/mUC, many patients are not eligible and most patients will eventually progression. Thus, there remains a critical need for effective and tolerable first-line treatment options in la/mUC. In second and later-line settings, both EV and pembrolizumab have independently shown an OS benefit. Preclinical work has further suggested that there may be synergy between these approaches with EV preclinical studies have shown hallmarks of immune cell death potentially augmented by PD-1/PD-L1 inhibitors.

To assess the clinical role for this combination approach, the authors enrolled cisplatin-ineligible patients who had not previously received systemic therapy for la/mUC. 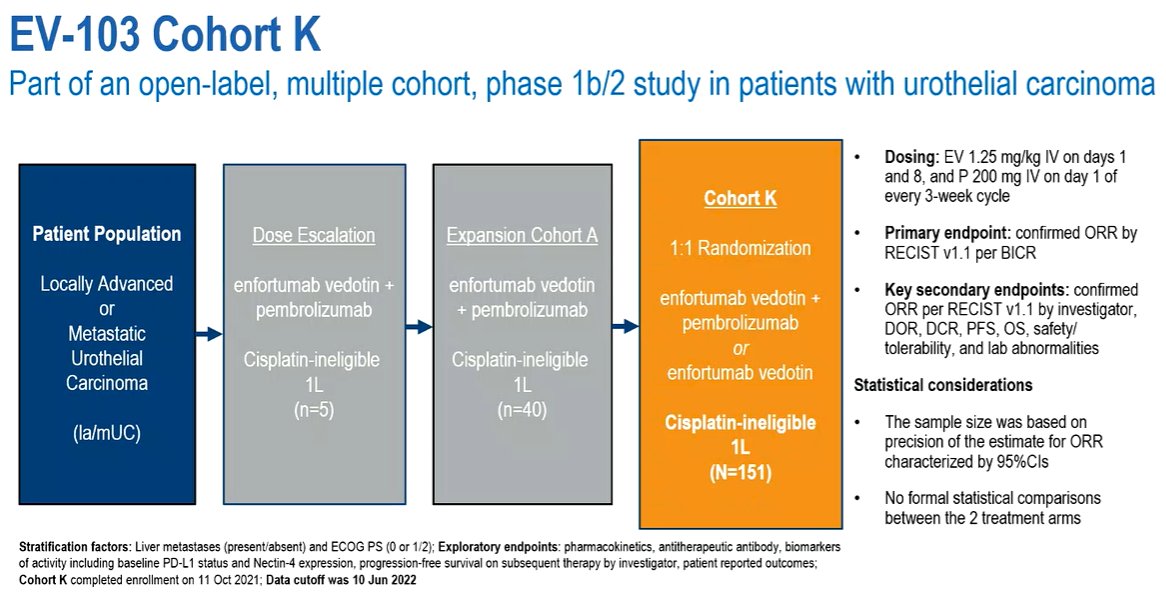 Once enrolled, patients were randomized 1:1 to EV (1.25 mg/kg) as monotherapy on Days 1 and 8 or in combination with pembrolizumab (200 mg) on Day 1 of 3-week cycles (EV-103, NCT03288545). The primary endpoint of this study was confirmed objective response rate (ORR) per RECIST v1.1 by BICR with secondary endpoints including duration of response (DOR) and safety (treatment-related adverse events, TRAEs). There were no formal statistical comparisons between treatment arms.

The authors enrolled 149 patients, of whom 76 were treated with the combination of EV and pembrolizumab, and the remaining 73 received EV alone. Notably, renal impairment was the primary reason patients were deemed cisplatin-ineligible (63% of those in the EV+pembro and 60% of those in the EV monotherapy arms).

Disease progression was the primary reason to stop therapy in both arms. 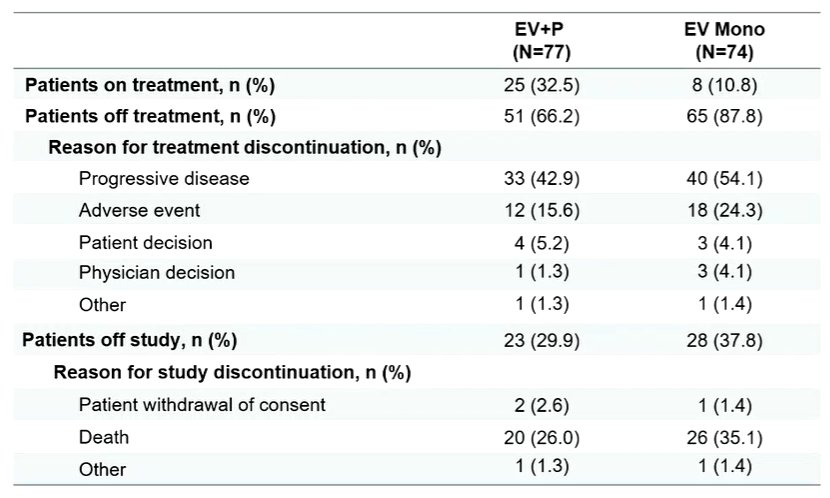 Further, 97.1% of patients treated with EV plus pembrolizumab had a reduction in tumor volume. To date, survival data are somewhat immature. However, there appears to be better median progression-free survival among those receiving the combination approach, compared to EV monotherapy, though overall survival did not differ.

Thus, Dr. Rosenberg concluded that the combination of EV and pembrolizumab showed high ORR with rapid responses and median DOR not reached in a first-line cisplatin-ineligible population of patients with la/mUC. The safety profile was tolerable and generally consistent with the known profile for EV+pembrolizumab. EV monotherapy was consistent with prior experience. There are currently three ongoing phase 3 trials assessing the combination of EV and pembrolizumab.