(UroToday.com) Following presentations from Dr. Nizar Tannir discussing results of the PIVOT-09 trial examining bempegaldesleukin plus nivolumab compared to the investigator’s choice of Sunitinib or Cabozantinib in first-line treatment of advanced renal cell carcinoma (RCC) and from Dr. Jonathan Rosenberg discussing the role of enfortumab vedotin either as monotherapy or in combination with pembrolizumab in cisplatin-ineligible patients with advanced urothelial cancer (UC), Dr. Laurence Albiges provided an invited discussion to contextualize these results in the Proffered Paper Session 2 of the European Society for Medical Oncology (ESMO) Annual Congress focusing on non-prostate genitourinary cancers.

She began by reviewing data presented by Dr. Tannir from PIVOT-09 regarding bempegaldesleukin plus nivolumab as first-line therapy in aRCC. She highlighted that current guidelines emphasize that all patients should be offered a combination treatment approach in this disease space. Highlighting the methodology of PIVOT-09 in which the combination of bempegaldesleukin plus nivolumab was compared to investigators choice of TKI monotherapy, she noted that this may not provide sufficient evidence to challenge that approach.

However, she first circled back to the rationale, emphasizing that it has been long recognized that a subset of patients (approximately 8-10%) with aRCC may be cured with high dose IL-2. Moving forward, the question of combining this approach with anti-PD-1 therapy was subsequently tested with the combination of IL-2 and nivolumab. However, in the first stage of a phase Ib/II trial, the study failed to meet continuation criteria. However, bempegaldesleukin as an immunostimulatory pro-drug may have benefit because, as an inert prodrug that is slowly released, there is preference for the dimeric βγ-IL-2 receptor. Thus, it may have selective stimulation of CD8+ T cells and natural killer cells (NK cells) over T regulatory cells.

She, therefore, questioned the added value of bempegaldesleukin, on top of the nivolumab. She then moved to questions of study design, specifically addressing the choice of the comparator arm. This study started accrual as of December 18, 2018. She emphasized that, as of this time, results of CheckMate 214 had already been presented and single agent TKI, as was used in the control arm of this study, was no longer standard of care.

Moving to the results, she noted that the combination of bempegaldesleukin with nivolumab failed to demonstrate a benefit compared to TKI monotherapy, in terms of overall survival, progression-free survival, or objective response rate. She specifically highlighted results in the intermediate and poor-risk subgroup in which a confirmed ORR was less common (23%) in the bempegaldesleukin plus nivolumab arm than in the TKI arm (30.6%). She further highlighted that these rates are lower than what she would have anticipated from single agent nivolumab therapy. Thus, she suggested that there may even be a potential detrimental effect of bempegaldesleukin when added to nivolumab.

Summarizing the results of PIVOT-09, she suggested that the underlying rationale for the trial was not strong enough, that the comparator used was inadequate, and that, in spite of that, the trial failed to show a benefit to bempegaldesleukin plus nivolumab. Thus, this approach “will not be implemented”.

She then moved to discuss the presentation from Dr. Rosenberg of Cohort K of the EV-103 study assessing the role of enfortumab vedotin (EV) either as monotherapy or with pembrolizumab in the first-line setting for patients with locally advanced or metastatic urothelial carcinoma who are ineligible for cisplatin. Highlighting the current disease landscape, she noted that this space has considerable unmet needs. 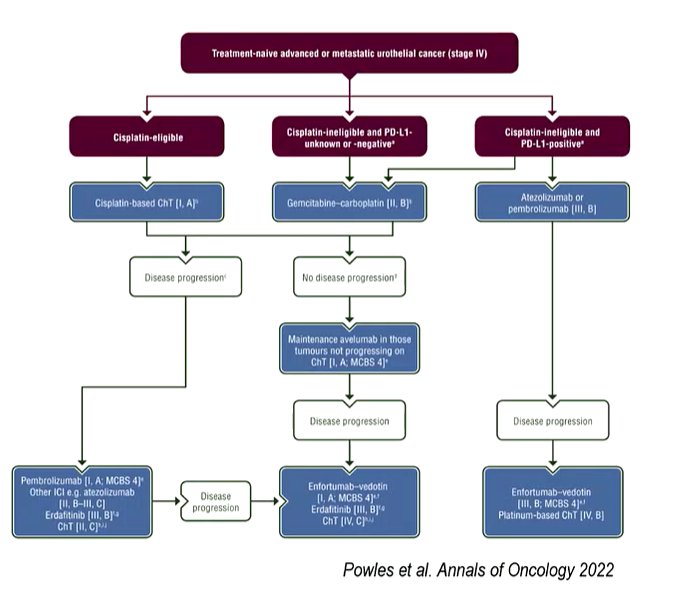 Approximately 30 to 50% of patients in this disease space will be deemed cisplatin-ineligible on the basis of the Galsky criteria. In these patients, gemcitabine + carboplatin or (among those who are PD-L1 positive) an immune checkpoint inhibitor is standard of care. However, objective response rates and progression-free survival rates are relatively low.

To date, the EV-103 trial has presented the results of many prior cohorts. The first presentation of Cohort A included 45 patients who received EV plus pembrolizumab in first-line cisplatin-ineligible patients. The response rate seen in this report (73%) dramatically exceeded prior data for carboplatin + gemcitabine (36%) and atezolizumab (23%).

Assessing key findings of this trial, Dr. Albiges noted that the addition of pembrolizumab to EV increases the rate of grade 3 or greater treatment related adverse events by approximately 15%. This is particularly notable in the increase of rash (17.1% vs 1.4% grade 3 or greater rash). 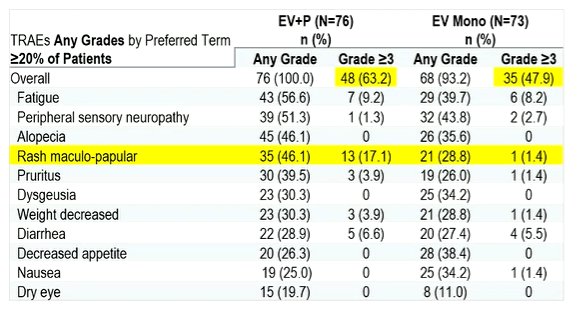 Dr. Albiges contrasted the results from the EV monotherapy arm with the results of the EV-301 trial, noting that the overall safety profile is similar with approximately 50% of patients having grade 3 or greater events.

Moving then to the question of efficacy, she noted that overall, the combination response rate is similar in this report as has been previously described in cohort A. Further, EV monotherapy appears to be similarly efficacious in the first-line setting as has previously been reported in later lines of therapy (eg. EV-301). Finally, the addition of pembrolizumab appears to confirm a 19-20% improvement in the objective response rate. However, she wondered whether these data are enough to define the contribution of each component. To this end, she noted that the ongoing EV-302 trial will assess the role of the combination of EV + pembrolizumab compared to chemotherapy with gemcitabine and cisplatin or carboplatin depending on eligibility.

She noted that this is a challenging landscape, filled with many negative trials including IMvigor130, KEYNOTE-361, DANUBE, CheckMate 901, and others. In the first-line setting, to date, chemotherapy has proven the standard of care in patients who are eligible. She noted that early disease control is required and it remains to be seen if the combination of EV and pembrolizumab can provide this.

In summarizing, she noted that EV-103 cohort K has established the role of EV monotherapy and in combination with pembrolizumab as first-line therapy in patients who are cisplatin-ineligible. She emphasized the importance of waiting for phase 3 data from EV-302 before adopting this approach. She also noted that other ADCs are being developed and evaluated.