(UroToday.com) Following presentations from Dr. Camillo Porta discussing updated results from the CLEAR trial on outcomes of the combination of lenvatinib and pembrolizumab as first-line therapy in advanced renal cell carcinoma (RCC) and from Dr. Grimm discussing a tailored approach using nivolumab either as monotherapy or in combination with ipilimumab in metastatic RCC, Dr. Young provided an invited discussion to contextualize these results in the Mini Oral session of the European Society for Medical Oncology (ESMO) Annual Congress focusing on non-prostate genitourinary cancers.

She began by discussing the CLEAR trial, the latest of the IO-TKI studies examining first-line treatment of patients with advanced clear cell RCC. She noted that patients with all IMDC risk groups were allowed though stratification was performed according to risk group, as well as geographic region. Unlike some of the other trials, rather than a two-arm comparison, the CLEAR trial used a three-armed comparison though the Lenvatinib + pembrolizumab arm has been the most impactful. With a median follow-up of 33 months, the data highlighted as this years ESMO meeting provides an additional 7 months of follow-up beyond prior reports.

She noted that “happily” all top line outcome measures have remained positive at 33 months. This includes the primary outcome of median progression-free survival, as well as overall survival, objective response rates, complete response rates, and duration of response. 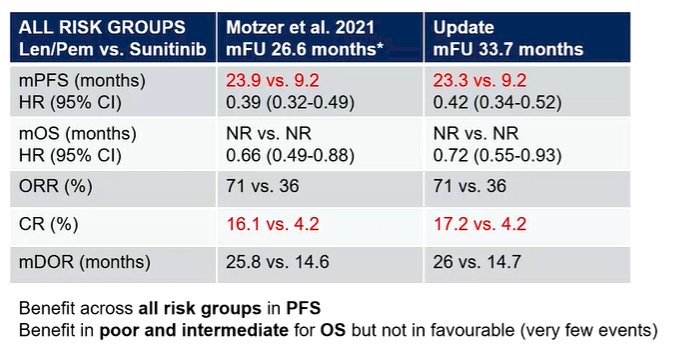 Dr. Young then provided a comparison of these updated results from the CLEAR trial with alternative doublet treatment approaches in advanced ccRCC including from CheckMate 214, KEYNOTE-426, and CheckMate-9ER. While median follow-up is much longer for CheckMate 214, median follow-up is relatively similarly less mature for the IO-TKI trials. In the cross-trial comparison, she noted that results from the CLEAR trial compare favourably to the other trials in terms of median PFS (23.3 months), ORR (71%), and complete response rate (17%) in the experimental arm. 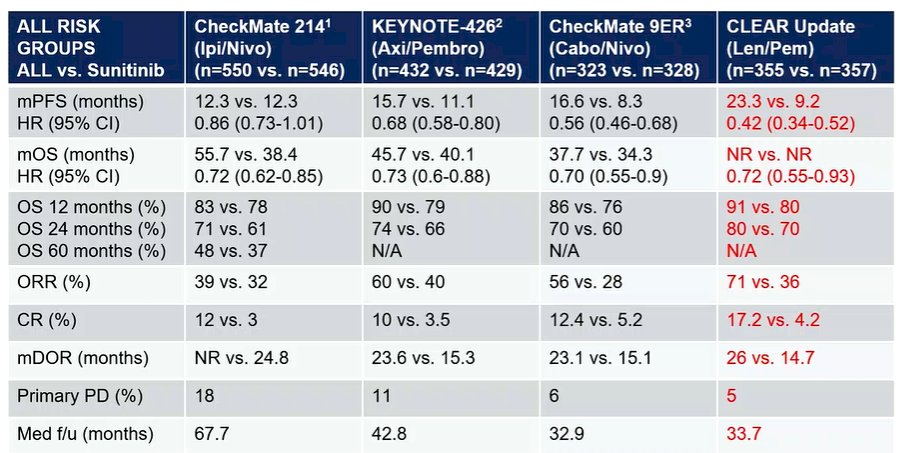 To better contextualize these comparisons of outcomes, Dr. Young provided a comparison of patient characteristics included in each of these trials. As highlighted in the table below, CLEAR included relatively fewer patients with IMDC poor risk disease, particularly when compared with CheckMate 214 and CheckMate 9ER. However, she noted that this is very difficult and there are limitations to the use of IMDC risk groups for stratification.

In the context of the CLEAR trial, she highlighted a subset of long-term survivals with nearly one-third of patients receiving the combination of lenvatinab and pembrolizumab who completed a full two years of pembrolizumab and remained on Lenvatinib, the three-year overall survival was 95%.

Given these new data from CLEAR, Dr. Young heighted remaining questions. First, she asked whether the choice of VEGFR-TKI or checkpoint inhibitor matters and whether we should consider the combination of Lenvatinib with pembrolizumab superior to the other combinations. To this question, she noted that only anti-PD-1 based (in contrast to anti-PD-L1) combinations have demonstrated overall survival benefit. Each VEGFR-TKI has a different toxicity profile and treatment half-life which may influence treatment selection and toxicity management. However, she emphasized the importance of a combination approach with upfront anti-CTLA-4 or VEGFR-TKI alongside the anti-PD-1 agents.

Second, she considered potential differences in toxicity and patient experience that we may need to consider with patients now potentially being on therapy for a long-term. She noted that patients in the CLEAR trial had a longer median duration of therapy. However, she noted that Lenvatinib dose reductions were required in 69% of patients and that grade 3 or higher adverse events were somewhat more common with this treatment approach.

Finally, she pondered the question of how we should choose between the “multitude” of first-line therapy options. There are numerous contributing factors including IMDC risk group and the presence of sarcomatoid histology; the need for significant disease response due to sites at risk or symptomatic disease; specific sites of disease including brain or bony disease; relevant morbidities that may interact with specific side effect profiles; patient preference; and considerations for second-line therapy.

Concluding her synopsis of this updated data from CLEAR, she highlighted that outcome data continues to show a clinically meaningful benefit from Lenvatinib and pembrolizumab and reinforces this as a first-line treatment option. However, there are numerous outstanding questions including the role of triplet therapy, optimal sequencing, longer term OS data, biomarkers for treatment selection, and treatment paradigms in non-clear cell histology.

She transitioned then to discussing the data from the final analysis of the TITAN-RCC trial, assessing an adaptive treatment approach in mRCC. In a phase 2 design, the authors used nivolumab monotherapy induction with the use of ipilimumab boost in patients with stable or progressive disease. 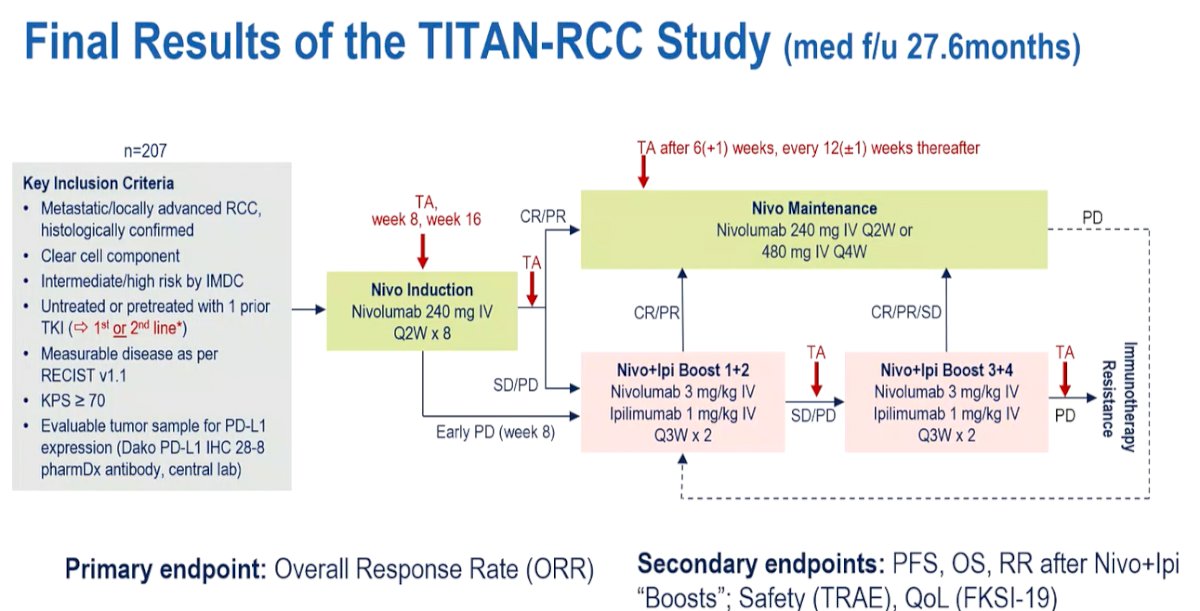 In terms of both progression-free and overall survival, Dr. Young highlighted that, while 67% of patients receiving an ipi boost, that means that one third did not receive any ipilimumab. However, she noted that in both the first- and the second-line setting, ORRs were approximately 10% higher when the combination therapy with ipi boost was used.

To put these data in context, she compared the results from the TITAN-RCC trial to the first-line CheckMate 214 trial in which all patients received combination therapy. While CheckMate 214 included far more patients with favourable risk disease, Dr. Young focused on those with intermediate and poor risk disease. In this subset, rates of progressive disease were much higher in the TITAN-RCC cohort and the median progression-free survival was much longer in the combination cohort from CheckMate 214. 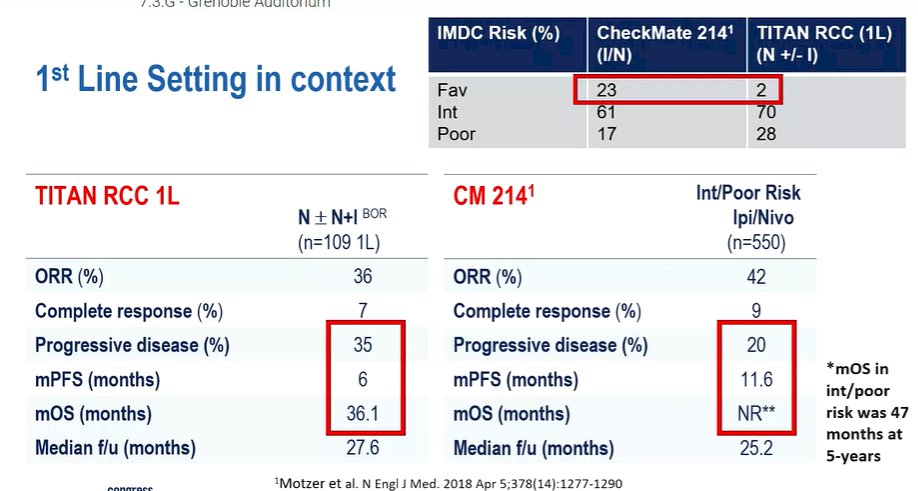 This conclusion fits in the context of other data. These include OMNIVORE and HCRN GU 16-250 each of which showed that an adaptive approach with nivolumab monotherapy for induction showed some activity, the salvage use of ipilimumab was frequently not feasible and has less benefit that upfront combination treatment. The ongoing Ca209-8Y8 trial will assess this more definitively.

In the second-line setting, she compared the results of TITAN-RCC with CheckMate 025 (nivolumab monotherapy) and METEOR (cabozanitinb monotherapy). In this setting, results in TITAN-RCC appeared better with ORRs of 32% vs 17 and 25%. However, it is worth noting that both CheckMate 025 and METEOR included approximately 30% of patients with third-line disease and these studies also had a larger proportion of patients with favourable disease.

Concluding her discussion of TITAN-RCC, she noted that a boost approach is not recommended in the first-line setting. In the second line setting, there was evidence of activity, though it is not clear if this is the right place for this treatment approach. Ongoing trials will assess alternative approaches to modifying treatment regimes to improve toxicity, while retaining upfront ipilimumab. Further, the adaptive approach may be used with another agent (eg. cabozantinib) following upfront nivolumab and ipilimumab (eg. the PDIGREE study).