However, as of ESMO 2022 he notes that the tide is changing and there is now some uncertainty:

Dr. Powles notes that there are several issues that we need to address from these two perioperative studies presented at ESMO 2022:

Dr. Powles highlighted that generally the pembrolizumab and atezolizumab trials were similar, but the nivolumab study was quite different, as highlighted in the following table:

Without question, there is a signal for pembrolizumab in the adjuvant setting from the KEYNOTE-564 trial,1 which was confirmed on the update 30-month analysis: 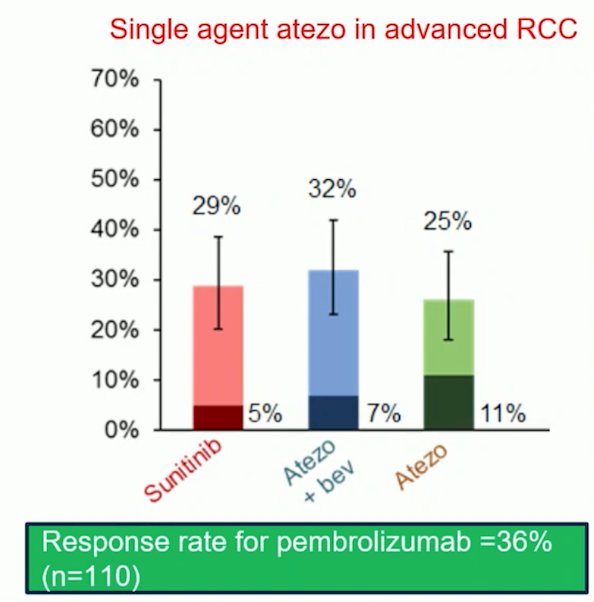 In the phase 3 PROSPER trial, the investigational arm included nivolumab administered (480mg IV q4 weeks) with 1 dose prior to surgery followed by 9 adjuvant doses. The control arm was surgery followed by surveillance without a placebo. However, Dr. Powles notes that there are a number of factors that may have influenced the results of this trial, including (i) the study being open label, (ii) no BICR, (iii) imbalance in delays during the biopsy portion of the trial, (iv) toxicity in response to starting nivolumab preoperatively, (v) not all patients undergoing surgery, and (vi) surgical complications and other potential issues with restarting nivolumab after surgery:

Dr. Powles notes that the interim analysis showed no difference in disease free survival, but what was the cause of the initial drop in the Kaplan-Meier curve? Furthermore, at 12 months 77% of patients were progression free or had surgery, and 53% of patients were still on study. As such, some details of this censoring are needed:

Other issues that must be considered for a neoadjuvant component of a trial is to assess the comparative control arm performance and how confident are we with the DFS/no surgery primary endpoint? Dr. Powles emphasized that the goal of these studies is OS, and even if the data are immature, we should see these outcomes even though the trial was stopped for futility. Importantly, is there a way of identifying patients who are at risk? Half the patients don’t relapse in the adjuvant studies. Early work from the bladder cancer literature assessing adjuvant atezolizumab suggests that there may be a role for ctDNA as a biomarker in this setting.

Have we seen this story before? As follows is Dr. Powles’ brief summary of adjuvant targeted studies (sunitinib, sorafenib, axitinib, pazopanib, and everolimus):

ESMO 2022: IMmotion010: Efficacy and Safety from the Phase III Study of Atezolizumab vs Placebo as Adjuvant Therapy in Patients with RCC at Increased Risk of Recurrence After Resection